Rector Addresses University’s History and Its Place in Current Events 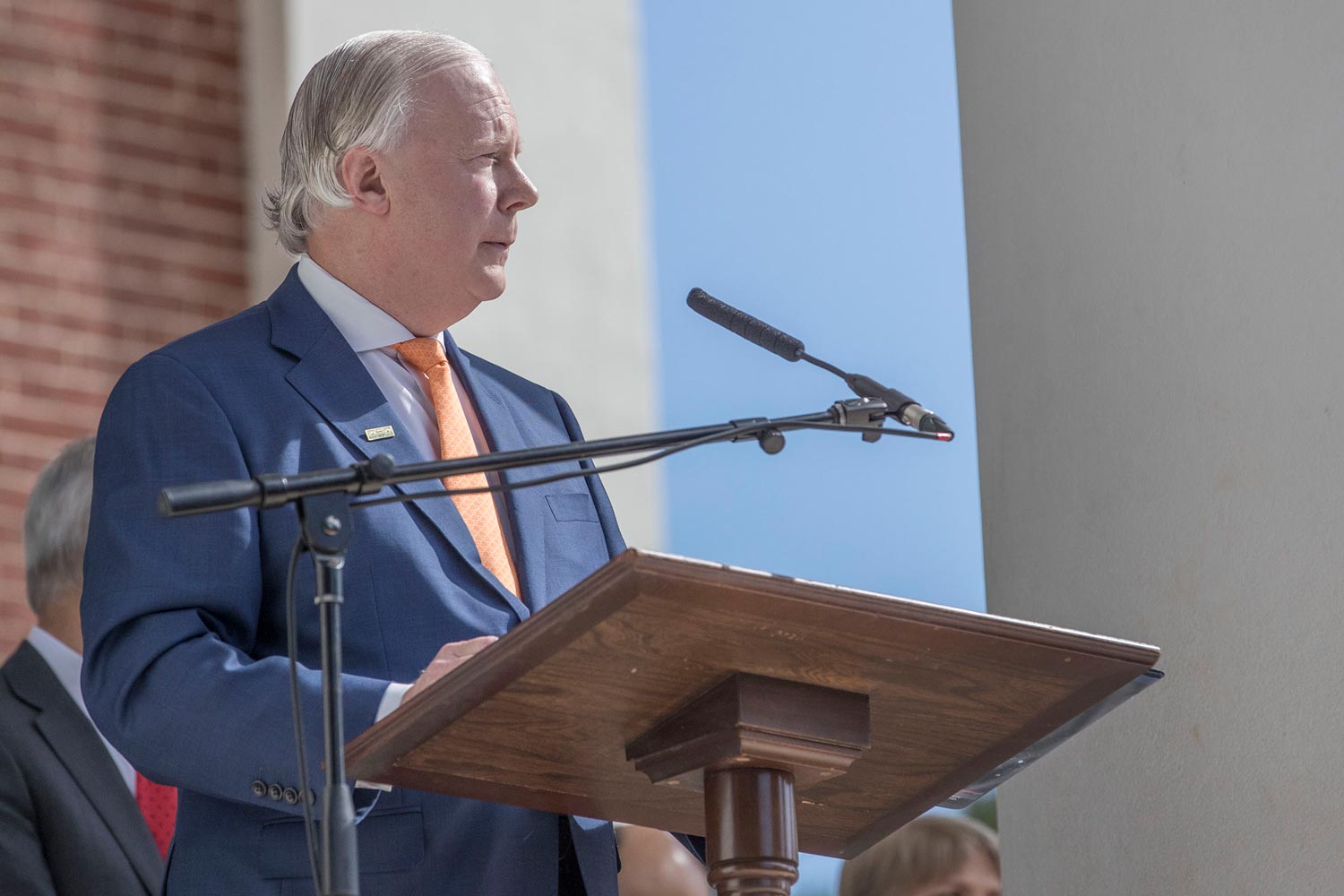 Previously, this University condemned the vile view of humanity that invaded Charlottesville and these Grounds on Aug. 11. It is easy to condemn the contemporary version of the abhorrent behavior for which history has sacrificed millions of lives to eradicate. The harder part is to ask, and to answer for ourselves, “How did it come to pass in the symbolic center of our University? And how are we to respond not just to its occurrence, but to its origin?”

As to the first question, let me be clear. The torch-lit march down our Lawn intending to intimidate was deeply unacceptable. And we will not allow its recurrence. In good faith, members of this board and others, independent of the events of that Friday night, have reviewed our response that evening and, as we have shared with the University community, there are areas where our response could have been better.

A significant factor implicating nearly all of the tactical decisions made is the mental framework with which we approached that assemblage. We have long been a University that has welcomed and promoted the free exchange of ideas, regardless of their repugnancy, as a basic tenet of a free society. And we have policed numerous demonstrations, marches and forums with that mindset and, perhaps naively, with trust that that mindset was shared by those demonstrating.

But this march was different, and the country and other communities and universities took note. What we witnessed was far more than a march protected by the First Amendment, but rather one that weaponized the First Amendment with the intent to intimidate and terrorize our community and our values. Across the nation, universities are dealing with the role of the First Amendment on campus. As a result of recent events, we have lost our innocence and are in a different place today. We were not sufficiently nimble in adjusting to this reality on Aug. 11, but we have taken stock of the judgments made then and the policies guiding our response that night.

Let me also be clear with respect to another issue regarding safety. We as a University have as our highest priority the safety of all in our community. I heard it in the voice of our president when she called at midnight that Friday evening to share with me what had transpired. I learned it from our dean of students, Allen Groves, as he recounted his experience surrounded by the terrorists at the Jefferson statue, protecting and standing with our students and others who in turn were courageously protecting our values. I saw it in the tired faces of the first responders and our staff on that Sunday afternoon at our emergency management center as they coordinated our response efforts. And we all are aware of the remarkable effort made by our medical professionals to care for the injured. So while there is deserved criticism, there is also deserved respect and appreciation for the dedication and courage of the many in our community who make creating a safe environment their life’s purpose.

To the second question of how we respond not just to the occurrence of abhorrent behavior, but to its origin: What has become known, as both a lament and a call to arms, as “Charlottesville” lays bare once again the intractable challenges that our society faces with respect to racial reconciliation, social justice and economic opportunity. Will we listen this time? Will we dialogue civilly with one another to achieve progress? Will we act? I would hope that we follow the admonition offered recently in the Wall Street Journal by James Baker and Andrew Young:

“The country faces a stark choice. Its citizens can continue screaming at each other, sometimes over largely symbolic issues. Or they can again do what the citizens of this country have done best in the past – work together on the real problems that confront everyone.”

At this University, we choose to work together. And you will hear from our president and the chair of the Deans’ Working Group as to how we will proceed in bringing new urgency to our previously defined mission for our third century.

There are some who believe that the history of this University is a barrier to achieving real change. That the legacy of Thomas Jefferson is one of racism and not equality. It is impossible to reconcile Jefferson’s words with his deeds. That the author of the religious freedom statute in Virginia and the fundamental aspiration of our democracy that “all men are created equal” could also enslave his fellow human beings rightfully leads to cynicism and rejection of his moral standing. Thomas Jefferson, like many, was flawed in many of his personal affairs. He embodied the flaws of the origin of this country. Reflect on the Constitution, principally crafted by James Madison, which denied any participation in the political process to women and valued the life of an African-American at 3/5’s of the value of others. And yet, it was ratified by all 13 original states before the Bill of Rights and 17 other subsequent amendments were enacted to begin to address the sins of this revolutionary experiment in democracy.

The genius of Jefferson and Madison and the other founders is that they began a journey for future generations to determine the concept of equality without restricting its scope, and created a government wary of the flaws of humanity that allowed for a dynamic process to address the original deficiencies. And they did so in a political process that created a nation with a revolutionary governance system that is monumental in its achievement. We will not turn our back on this history, but we are keenly aware of its shortcomings and have learned and will continue to learn as we move forward.

As Alexis de Tocqueville, the 19th-century French diplomat, wrote in “Democracy in America,” the “greatness of America lies not in it being more enlightened than any other nation, but rather in her ability to repair her faults.”

We embrace the entirety of our history – all of the good and, yes, all of the ill. Our history as a university is inextricably woven into the history of this country. No other university has had three former presidents lay its cornerstone, two of whom were the intellectual inspiration and principal authors of contemporary democratic principles. Our history is bound up with that of this nation’s founding, the Civil War, and the system of Jim Crow that followed. It is equally bound up with the great transformations of the mid-20th century that renewed the nation’s democratic promise and opened up its universities through the GI Bill, desegregation, and co-education. We reflect, for better and for worse, the great accomplishments and the great failures of this nation.

Despite the nation’s progress, fundamental faults remain. If we really want to improve the history of our past, we must improve the history of our future by continuing to acknowledge and repair our faults and bending the arc of history to provide real justice and equality for all. In the eloquent words of Maya Angelou, “[H]istory, despite its wrenching pain, cannot be unlived, but if faced with courage, need not be lived again.”

A critical first component of repairing our faults is ensuring the completeness of our history. What President Sullivan has been leading over her tenure through the President’s Commission on Slavery and the University is an effort to do just that – to recognize the contributions of those who previously were not recognized, and to honor in our community the contributions of those such as Gibbons, Martin, Foster, Willis and the enslaved laborers. In doing so, we enrich ourselves and create a more united community that reflects all of its participants. Similarly, we will address those symbols on our Grounds that undermine our community in a manner that is holistic, thoughtful and inclusive and calls upon the expertise of thought leaders in the relevant disciplines.

The hate demonstrated on Aug. 11 and 12 awakened the country to the continuing issues of our time. Let us not squander the energy that now exists. As Elie Wiesel once stated, “[T]he opposite of love is not hate, it’s indifference.” We cannot afford an approach of indifference. Otherwise, future generations will judge us as we judge prior generations.

So I ask each person in this community – each student, each faculty member, each staff member, each administrator and each member of this board: How will you improve the history of our future?

What Is the ‘4th Side’? END_OF_DOCUMENT_TOKEN_TO_BE_REPLACED