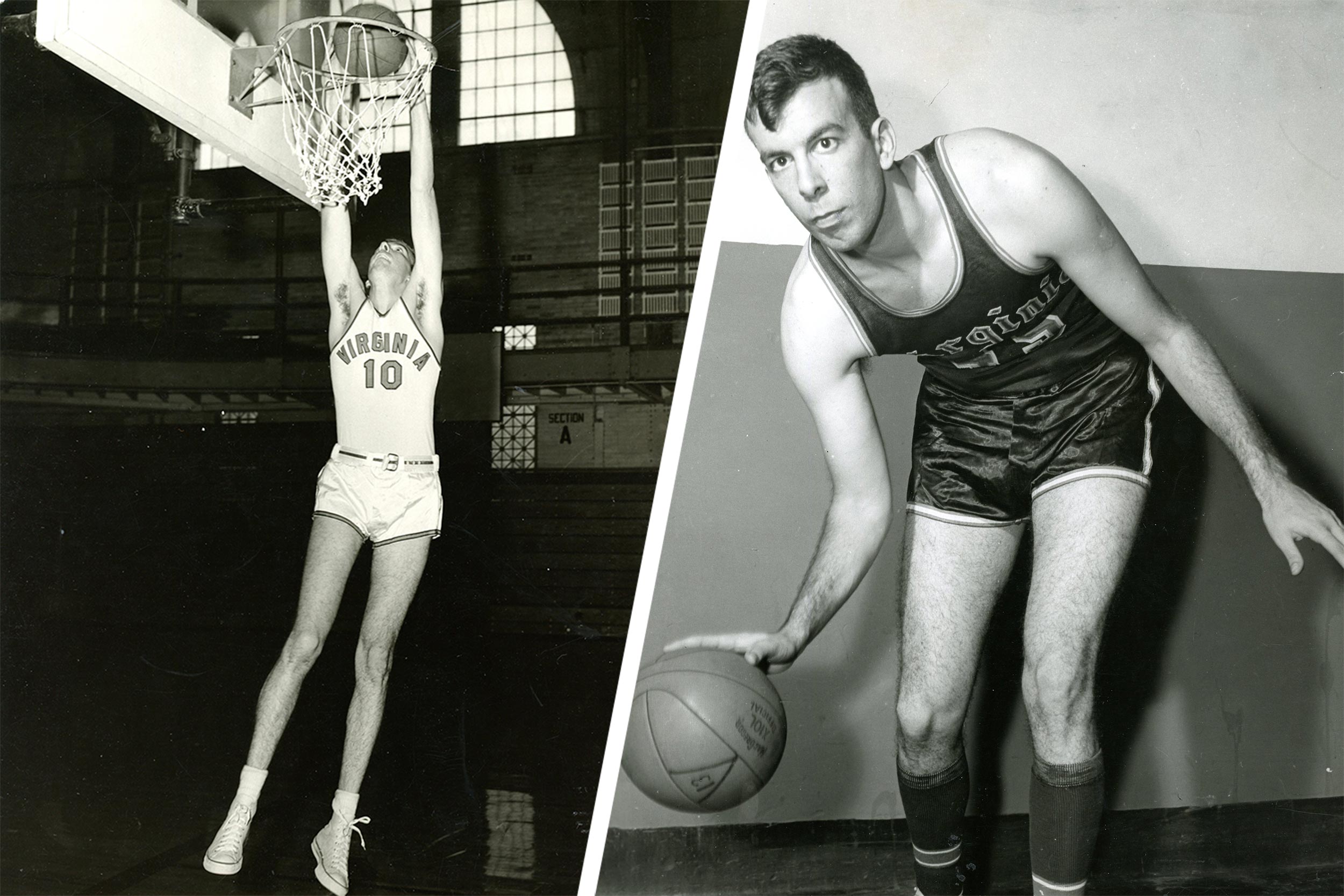 Bob Mortell posted the highest season rebounding average in UVA history during the 1959-60 campaign, and grabbed a school-record 25 rebounds in a game against Washington & Lee. (Photos courtesy of UVA Athletics)

In 1980, when a graceful 7-foot-4 giant named Ralph Sampson famously patrolled the basketball court for the University of Virginia on his way to three national player of the year awards and a place in the Basketball Hall of Fame, a friend mailed Bob Mortell a newspaper clipping.

According to the report, Sampson had broken one of Mortell’s school rebounding records.

That came as news to Mortell. “He didn’t know he had any records,” his wife, Caroline Mortell, said through smiles and tears this week, as she prepared for her husband’s memorial visitation in Charlottesville. Robert Bruce Mortell, age 83, died Jan. 4 after a long and successful career in the mining industry.

Somewhat surprisingly, two of Mortell’s UVA records survived the statistical onslaught of Sampson and the many other tall and talented players who followed in his wake.

During the 1959-60 season, Mortell averaged 14.6 rebounds per game, easily the highest average ever posted by a Cavalier. And he has the two highest single-game rebound totals in UVA history: 25, in an 86-59 victory over Washington & Lee University on Feb. 27, 1960 – his last home game in Memorial Gymnasium as a fourth-year player; and 24, in an 83-71 win over Virginia Military Institute nearly two months earlier.

Alas, in between those two record-setting games were 13 consecutive losses, as the Cavaliers posted a 6-18 overall record and a 1-13 mark in Atlantic Coast Conference play. Needless to say, it was a different era for UVA basketball, a full decade before Al Drummond became the first African-American player to receive a basketball scholarship at UVA and 16 years before the Cavaliers won their first ACC Tournament championship.

“I think it is a totally different game than when we played,” said former teammate Tony Laquintano, among the many teammates who remained close with Mortell. “The guys are so much bigger, so much stronger, so much faster – and so much rougher.”

At 6-foot-8, Mortell might have been UVA’s tallest recruit to that point in its history, Laquintano recalled. But he didn’t play much before his senior season, with an all-conference center named Herb Busch entrenched in the lineup ahead of him.

When Busch graduated, Mortell – by then a senior – inherited the starting spot. At the last practice before the 1959-60 season tipped off, head coach Billy McCann sat the players down on the court and predicted what would be in store for them. 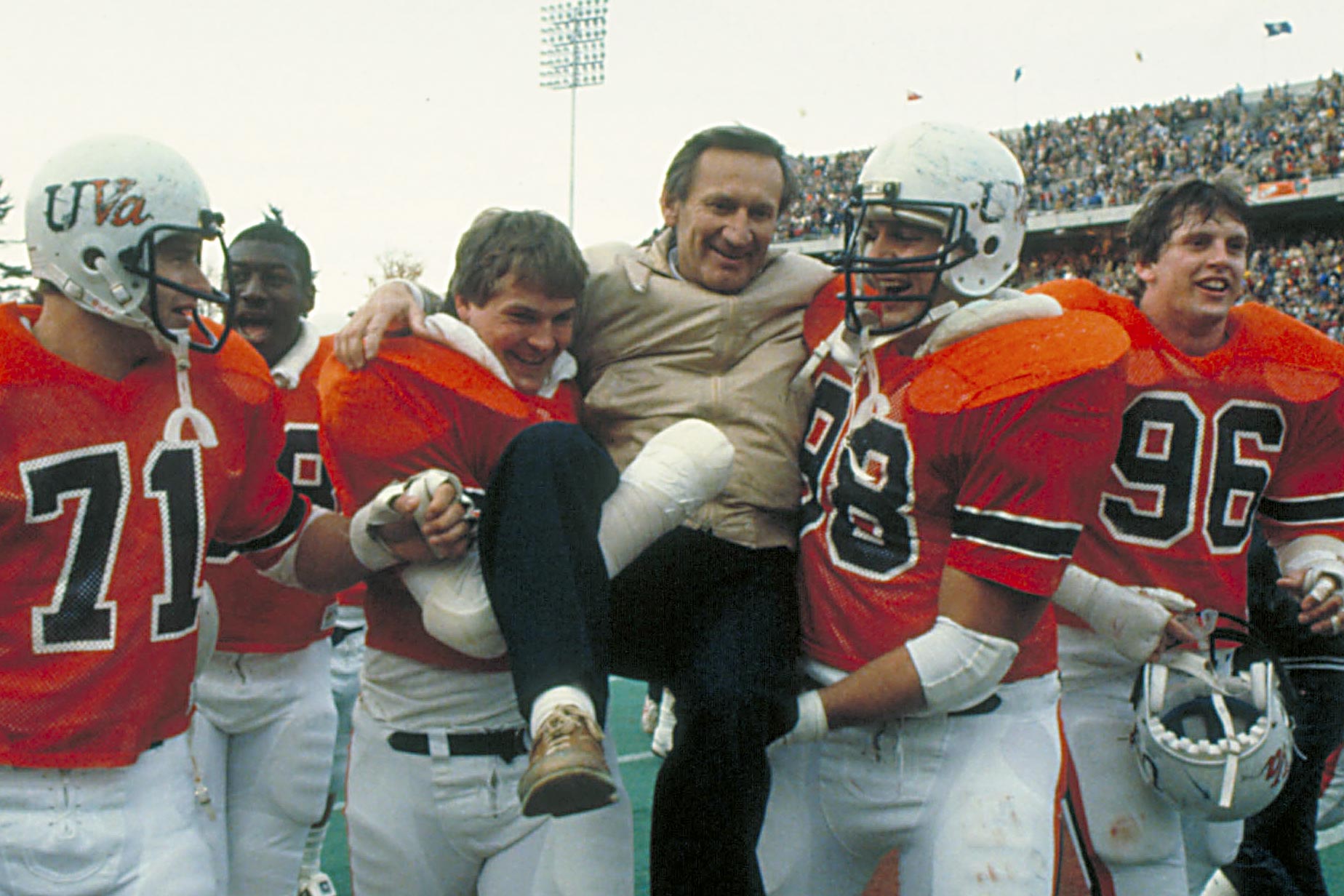 Daily Report
DELIVERED RIGHT TO YOUR INBOX
Sign up for the Daily Report, your free, comprehensive source for all UVA News.

Mortell ended up leading the ACC and finishing second in the country, behind Leroy Wright of Pacific University.

“I don’t think [Mortell] weighed more than 200 pounds. He was very thin,” Laquintano said. “He was a good rebounder, had a nice, soft touch around the basket and ran the court well. He always joked that he didn’t make the NBA because I didn’t get him the ball enough.”

In the record-setting game against Washington & Lee, Laquintano, the team’s point guard, said he made a special effort to “have Bob have the best possible game he could have scoring – and he did,” estimating that Mortell finished with around 24 points. “Of course, I had nothing to do with rebounds, but I told him I missed a lot of shots on purpose so he could rebound and score.”

After graduation, Mortell found success off the basketball court. A geology major, he built a career in the mining industry. In 1987, he founded the Eastern Drillers Manufacturing Company, a drilling equipment supplier based in Columbia, Pennsylvania.

Caroline Mortell said her husband’s athletic background prepared him well for his career. “I hope everyone gets as much out of sports as my husband did,” she said. His approach, she said, was to “do what you did well, and delegate the rest to those who knew their field. That’s what a team mentality is all about.”

Mortell also maintained close ties with his former teammates, building a second home in Albemarle County in 2005. “He preferred being here with his friends,” Caroline Mortell said.

Bob Mortell and his teammates – including Laquintano, Gene Flamm and Stu Kessler – closely followed Cavalier basketball, often gathering with pizza and beer in front of “the biggest TV he could have,” his wife said, estimating that it has a 90-inch screen. When circumstances didn’t allow everyone to watch games together, they connected on the phone.

With college basketball played so much differently these days, Laquintano said it seems unlikely Mortell’s records will ever be broken. The second-highest season average in UVA history is 12.0 rebounds per game (by Norm Carmichael in 1967-68) – more than 2½ fewer than Mortell’s mark of 14.6. And no one since the mighty Sampson has posted as many as 21 in a single game, let alone approached Mortell’s 25.

“They say that records are made to be broken,” Laquintano mused, “but if you think of all the big men who have been here over the last 60 years, and no one has broken them … I would think it will stand the test of time.”