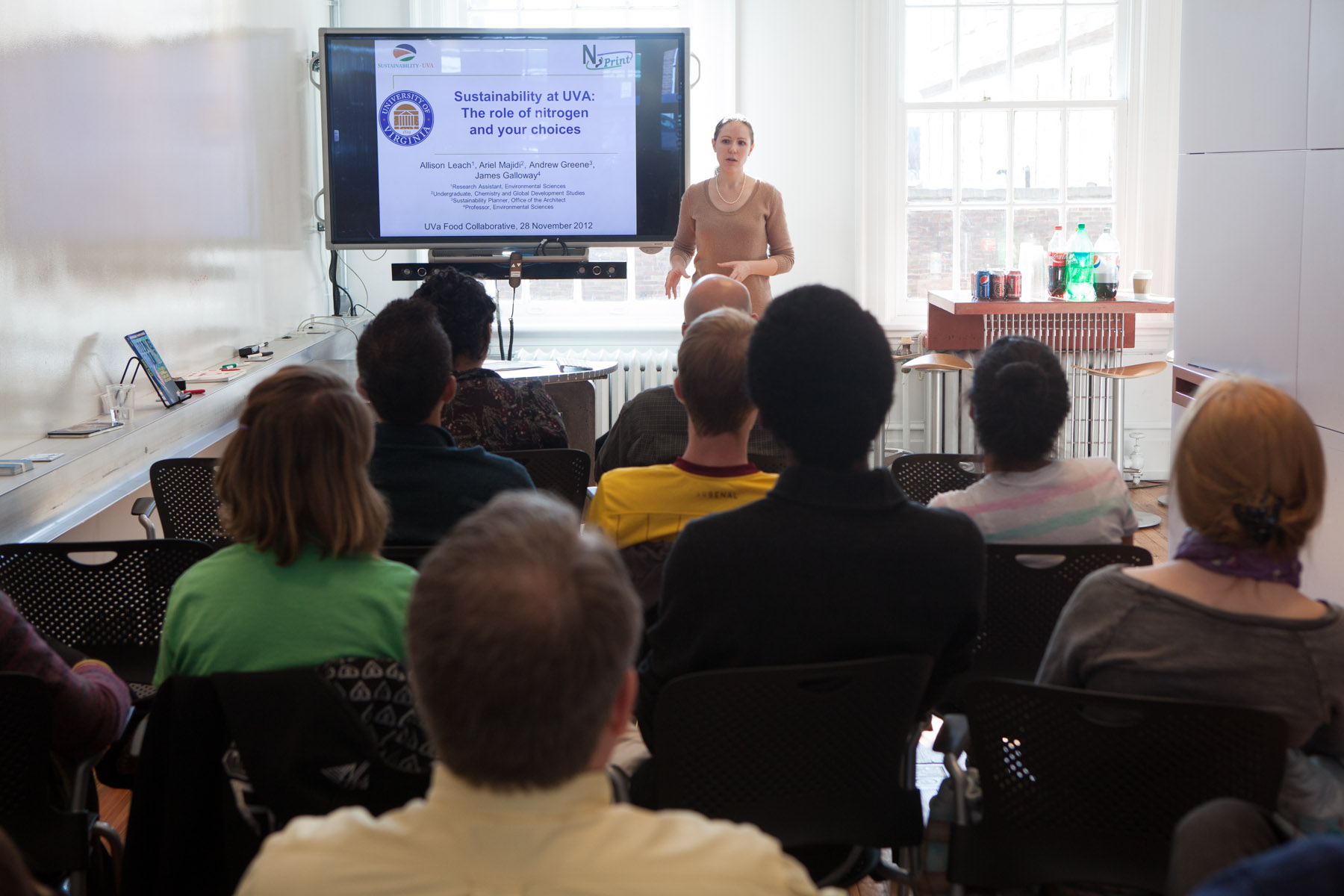 Pioneering researchers at the University of Virginia’s College of Arts & Sciences have developed a model to determine a “nitrogen footprint,” a measure of how much reactive nitrogen a person or institution generates.

The vast majority of nitrogen is harmless inert gas. The remainder, called reactive nitrogen, is found in a variety of forms, including as nitrate, ammonia and nitric oxide, and it interacts with elements of the environment to create smog – increasing levels of ozone at the Earth’s surface, acidifying the water and weakening the upper-atmosphere ozone layer.

Also working with fourth-year chemistry and global development studies major Ariel Majidi, Leach used the formula to track the University’s nitrogen footprint, which they calculated to be 517 metric tons in 2010.

Galloway called the nitrogen footprint calculation “groundbreaking” and said U.Va. is the first school in the country to measure this. He said he and Leach have been contacted by a variety of foreign and domestic institutions, including some universities.

“We just had a two-and-a-half-hour video conference on nitrogen footprint modeling in Africa,” Galloway said.

Energy use and food production are the two main components of a nitrogen footprint, Leach said. Nitrogen enters the food equation as part of production, consumption and transport. Reactive nitrogen is also a byproduct of burning fossil fuels, some coming from the fuel itself and some from heat converting inert nitrogen to reactive nitrogen.

In determining the University’s nitrogen footprint, Leach calculated about 45 percent comes from utilities and 39 percent from food production. The remaining nitrogen generators include transportation, fertilizer use and waste.

Knowing what creates a nitrogen footprint can help reduce it, Leach said.

“On the food side, we need to know the types of food, the amounts being consumed and how they are produced,” she said. “Organic food production is generally more nitrogen-efficient than conventional” In addition, she said that two-legged animals, such as chickens, are generally more nitrogen-efficient than four-legged animals, such as cows.

Using Leach and Galloway’s research, the University Committee on Sustainability has recommended targeting a 25 percent reduction in the University’s 2009 nitrogen footprint by 2025.

The recommendation, approved by the Sustainability Committee on Nov. 29, will be forwarded to the Faculty Senate and the Student Council for their consideration. The recommendation may be presented to the University’s Board of Visitors sometime in the spring.

Andrew Greene, the sustainability planner in the Office of the Architect and secretary of the sustainability committee, presented the committee with a chart that showed the University’s nitrogen footprint divided into two main areas – energy and food. Greene pointed out an overlap of the nitrogen and carbon footprints, noting that reducing U.Va.’s carbon footprint would also reduce its nitrogen levels. The University has already committed to reducing its carbon footprint by 25 percent of its 2009 levels by 2025. Greene said that about one-fifth of a 25 percent reduction in the University’s nitrogen footprint was already in practice and under way, including composting food waste. Dining Services composts food waste from Newcomb and Observatory Hill dining halls through a pilot project with Panorama Farms in Earlysville, and has contracted with Blackbear Composting to handle the food waste from Runk Hall dining facility.

Greene said Dining Services could further reduce its nitrogen footprint by purchasing food from nitrogen-efficient farms, though he acknowledged there is no certification for that, and shifting menus and recipes from beef to chicken.

Greene said if the nitrogen footprint reduction goal is approved, the University would develop an action plan with nitrogen-reduction strategies and periodic reports on how well the University was complying.

“We would have to refine projections and explore new strategies to implement,” Greene said. He conceded there would have to be an education component; while many people seem to understand carbon footprint, most do not easily grasp the impact of nitrogen.

A Year We Will Never Forget: 2019-20 in Review END_OF_DOCUMENT_TOKEN_TO_BE_REPLACED

‘What Will You Carry With You?’ Remarks From UVA President Jim Ryan END_OF_DOCUMENT_TOKEN_TO_BE_REPLACED