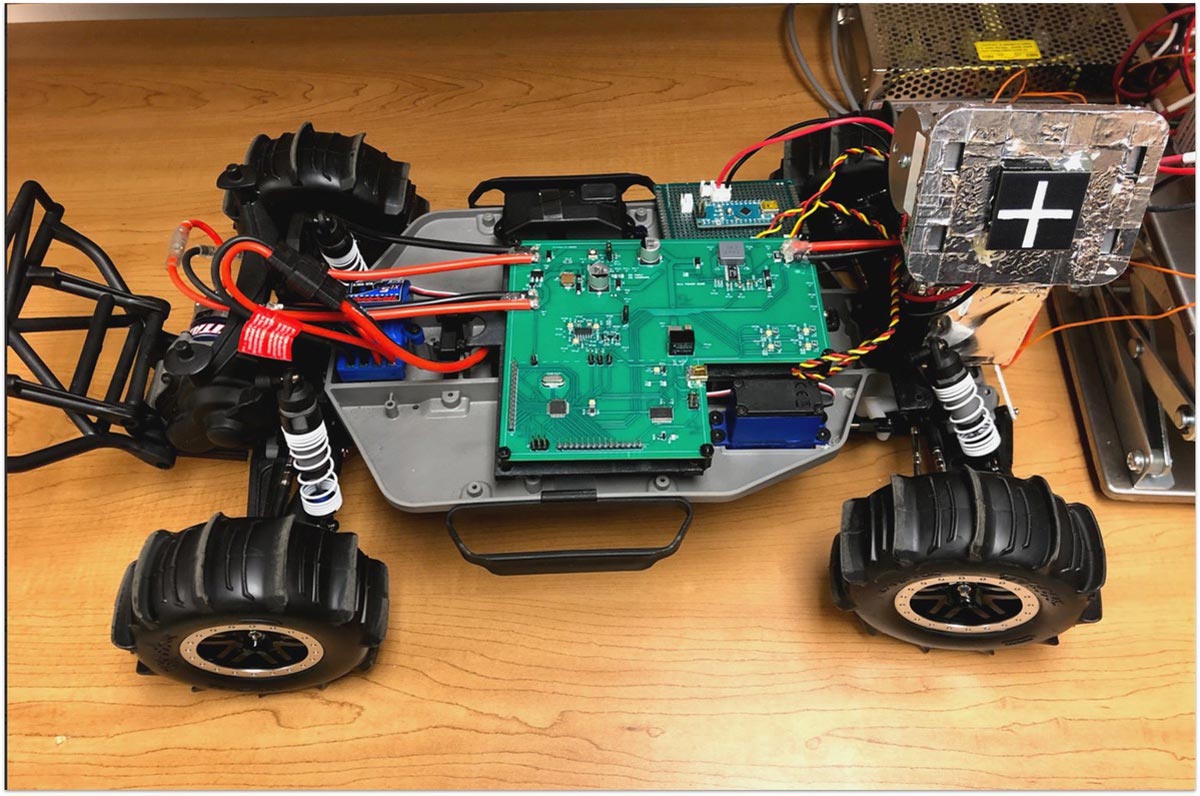 A rover model used by a UVA Engineering team in their work for NASA’s 2020 Big Idea Challenge Awards. (Contributed photo)

Artemis will join Pink Floyd on the dark side of the moon – and the University of Virginia has contributed to getting it there.

Artemis is a NASA program to return humans (including the first woman) to the moon, seeking to further explore its polar regions and the regions that remain in perpetual darkness. (Pink Floyd, on the other hand, is a rock band that made the haunting studio album, “The Dark Side of the Moon” one of its signature song catalogues.)

NASA finds one dark spot on the lunar surface particularly intriguing. The Shackleton Crater, at the lunar south pole, is 4.2 kilometers deep and lies in perpetual darkness, though its rim is lit for more than 200 Earth days due to the five-degree ecliptic tilt of the moon in its orbit. The permanently shadowed parts of the crater have temperatures around minus-289 degrees Fahrenheit, and NASA believes there is ice in these shadows, frozen and protected from solar radiation for about 3.6 billion years. NASA personnel speculate that this ancient lunar ice can provide information about the solar system, which is about 4.6 billion years old.

Mool C. Gupta, the University of Virginia’s Langley Distinguished Professor of Electrical and Computer Engineering and director of the National Science Foundation-funded Center for Laser and Plasma for Advanced Manufacturing, led a team of UVA students to participate in the 2020 Big Idea Challenge Awards, receiving a $123,000 grant in February 2020 to develop a plan for the wireless transmission of energy on the moon.

The UVA team created BELLE, or Beaming of Energy via Lasers for Lunar Exploration, which uses solar arrays on crater rims to provide energy to a laser. The laser transmits the energy to rovers’ solar panels that match the laser’s wavelength, allowing exploration of the dark areas.

“The permanently shadowed regions have been in the dark for billions of years and solar power is not available,” Gupta said. “At the top of the craters, there is plenty of sunshine. The idea we proposed is to harness the sunlight at the top of the craters, convert the solar light to electric power and use it to run a laser. That laser light can be beamed into the permanently shadowed regions and also can be tracked to provide power to a moving object like a rover.” 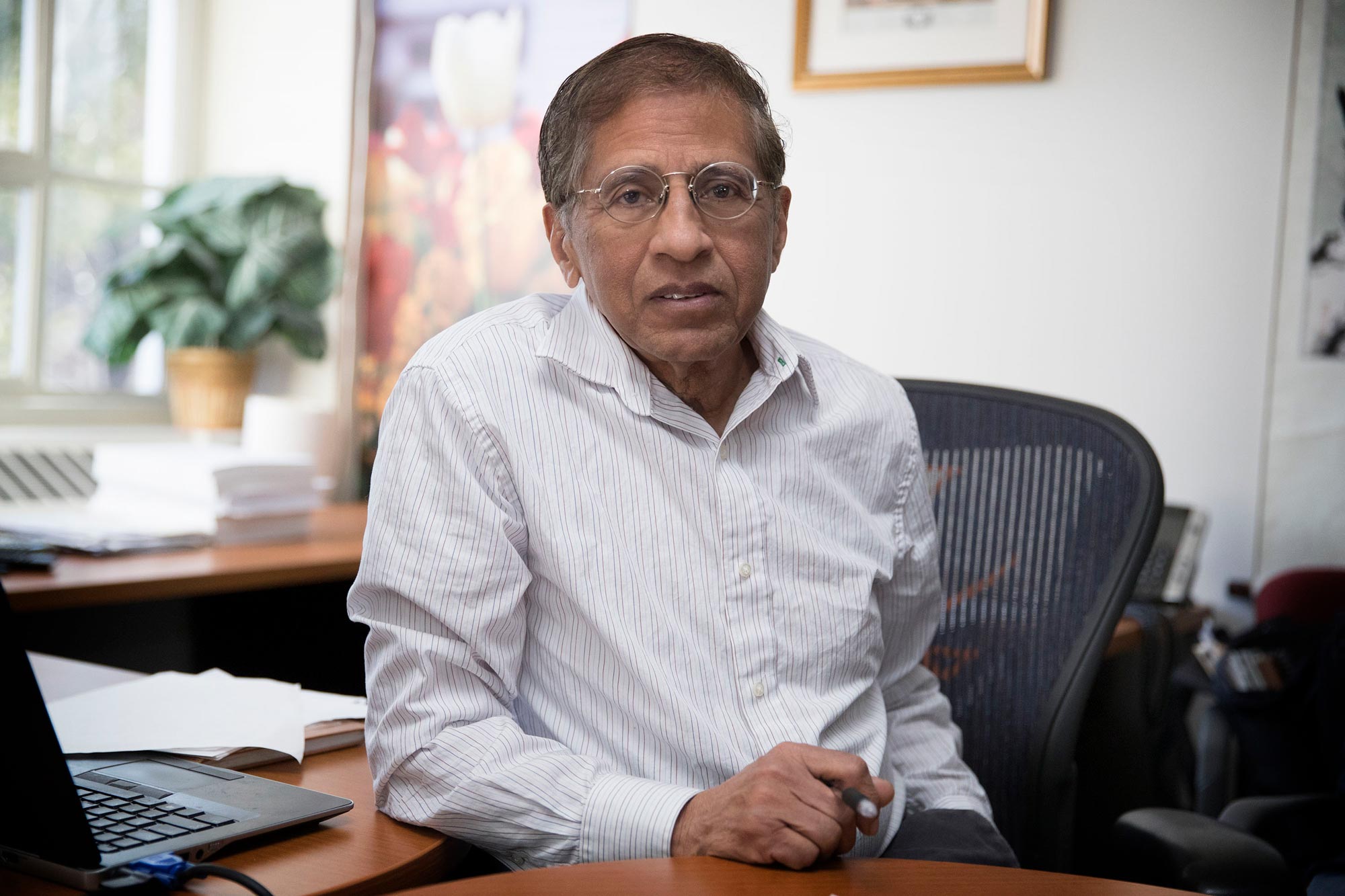 A solar panel on the rover would convert the laser beam to electric energy, powering the rover as it explores dark areas and providing energy to scientific instruments mounted on the rover.

“The laser can charge a battery mounted on the rover and it will be able to do so for a long time using the sunlight at the top of the crater,” Gupta said.

The energy-beaming technology also has a variety of potential applications back on Earth, from disaster relief to light shows.

“Both power beaming and optical tracking have significant applications in the energy and aerospace industries, including the transmission of power both to and from the ground, spacecraft, aerial vehicles, satellites, rovers and other exploratory equipment,” the team said in its report to NASA. “Wireless power transmission could also play a vital role in providing power to remote locations or in the event of natural disasters, when traditional power systems are destroyed.”

The NASA challenge was in Gupta’s wheelhouse.

“I was looking for some ideas for the exploration of the permanently shadowed regions, and based on my experience with high-power lasers and solar energy, I came up with this idea and a prepared a proposal,” Gupta said. “Later, I found that NASA in the 1990s also considered ideas of laying down 10 kilometers of electric cable from top of the crater into the permanently shadowed regions, using microwaves to beam energy, and also beaming of laser energy.”

“[Jaffe] has been working on power beaming for defense applications,” Gupta said. “I contacted him about a year ago and asked him if he would consider being an external adviser for our student competition team, to answer any questions we may have during the project. He agreed. He is very busy in his current position, so he was not directly involved, but was available if we had any higher-level questions.”

“George Wilkes is the only graduate student from my own research group,” Gupta said. “He had prior experience in the use of high-power lasers, high-efficiency solar cells, laser beam scanning system and laser safety, so it was very advantageous to include him in the team to share his prior experience of working on my research projects.”

Wilkes, who wants to work in space exploration using lasers and solar energy, said working on the project was fun.

“It makes engineering projects much more challenging when you have to consider not only solutions to the problem, but solutions that are compatible with the harsh environment of the lunar surface, where there are extreme temperatures, lack of atmosphere and heightened radiation,” Wilkes said.

Serpe said he wants to work on either renewable energy or space exploration.

“I worked on the laser tracking and power delivery systems,” Serpe said. “It was the first time I’d worked on an embedded system of such a large scope, and it was incredibly educational experience. It’s helped solidify embedded programming as my main passion and helped me build many foundational skills in the field.”

With the COVID-19 restrictions, the team presented its proposal to NASA remotely.

“A video of the operation of the system was made and sent to NASA as part of the competition,” Gupta said. “The project was challenging, as students could not get into the lab for four or five months, and some of the work was done at students’ houses. It was a challenging year, but students were motivated, committed and successfully completed the project.”

St. Martin said students had to be creative to do their work.

“Working on this project was amazing and very challenging,” St. Martin said. “I am lucky to have been leading such a talented team of engineers who were able to adapt to the situations that we faced.

“The biggest challenge we faced this semester was trying to continue work during the pandemic. We 3D-printed parts in people’s apartments, tested components with a low-powered laser, met weekly over Zoom and set ambitious but attainable goals for ourselves to stay motivated.”

St. Martin, who will pursue a Ph.D. in materials science after graduating in May, said he wants to focus his research on renewable energy.

“The biggest challenge we faced this semester was trying to continue work during the pandemic. We 3-D-printed parts in people’s apartments, tested components with a low-powered laser, met weekly over Zoom and set ambitious but attainable goals for ourselves to stay motivated. ”

“While it may not directly relate to the work we did in this project, I have learned so much about the engineering process and problem-solving through this project that will equip me for anything to come,” he said. “Watching our presentation and doing the Q&A was a really incredible experience for me. It felt like all of our hard work had finally come together into a finished product for the first time, and hearing the judges’ excitement about our work was a great feeling.”