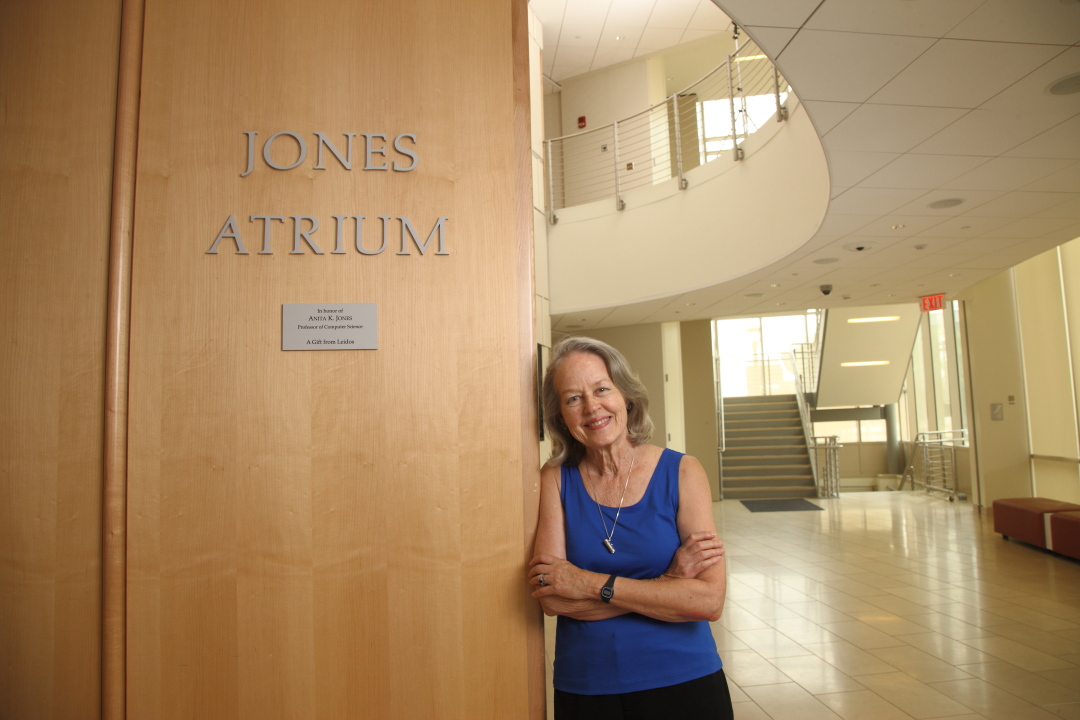 Anita Jones, professor emerita, in the Rice Hall atrium named for her.

With a generous contribution from the technology company Leidos, the atrium of the University of Virginia’s Rice Hall has been named the “Jones Atrium” in honor of University Professor Emerita Anita Jones.

For Jones, a longtime professor and former head of the Department of Computer Science at U.Va.’s School of Engineering and Applied Science, it was a particularly meaningful and unexpected retirement gift. The atrium dedication was made on the occasion of her stepping down from the board of Leidos (formerly Science Applications International Corporation, or SAIC) after decades of service.

“For an academic, that is just such a wonderful and thoughtful gift. It was a complete surprise,” said Jones, who was informed of the gift at a retirement dinner hosted by Leidos.

“We wanted to find an appropriate way to recognize her,” explained John Thomas, an executive vice president in charge of corporate strategy, who said the company reached out to U.Va. to come up with an appropriate gift. In addition to Jones’s ties to U.Va, the University is also one of Leidos’s strategic partners. “We have an ongoing relationship with the University,” Thomas said, which includes supporting research and other initiatives, primarily at the Engineering School.

Jones first came to U.Va. in 1988 as chair of the computer science department, after serving on the faculty of Carnegie Mellon University and then co-founding a small software start-up.

“It was a very attractive time to come to U.Va. in computer science,” she said. “There was opportunity to build a strong department, and that was something I wanted to do.”

That same year, she joined the board of SAIC, which later became Leidos. On the board, Jones led the ethics and corporate responsibility committee for many years.

“She really provided a lot of leadership in that area, in how the company engages with the community and supports the communities where we live and work,” Thomas said. “That was a major contribution.” He also noted that Jones was regarded as the board’s technology expert.

In 1993, Jones was appointed director of defense research and engineering at the U.S. Department of Defense, where she oversaw the science and technology program, research laboratories and DARPA. She returned to U.Va. in 1997. Later, she was appointed a University Professor at U.Va., a distinction awarded to only about a dozen faculty members at any given time, and which allows faculty to teach in any department. Jones took the opportunity to teach science and technology courses in addition to computer science.

Jones retired from teaching in 2010, but retains an office at Rice Hall and said she tries to stay involved with the University. “For example, I chaired the search committee for the next dean of engineering,” she said. “And I try to be a role model and mentor for women graduate students.”

Professor Kevin Skadron, who currently chairs the computer science department, said it was especially appropriate that Jones be recognized in Rice Hall. “She did much of the initial work to plan for this building when she was chair,” he said. “And she has served the department in so many ways.”

At UVA, There Is a Club for Everyone END_OF_DOCUMENT_TOKEN_TO_BE_REPLACED