Road Trippin’ May Get Easier, Thanks to These UVA Students 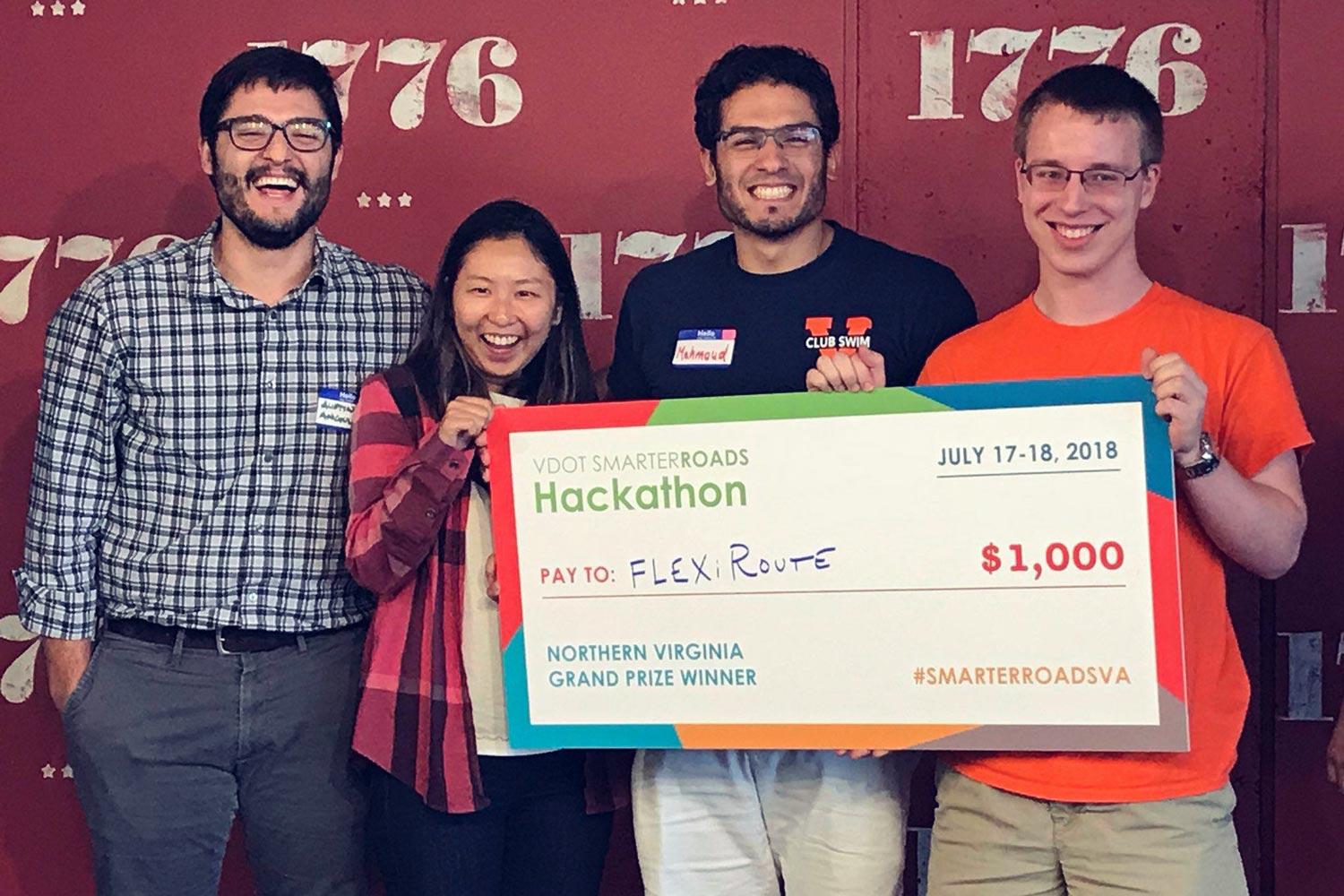 As he drove toward the Brooklyn Bridge last New Year’s Eve on his way to see New York City for the first time, Mahmoud Elnaggar was filled with excitement. The University of Virginia student had spent most of his life in Egypt and was now going to be getting a taste of the Big Apple.

But it was a sour first bite.

To Elnaggar’s surprise, there was a whopping $18 toll just to cross the bridge. “I was like, ‘Oh my God!’” Elnaggar said.

Elnaggar’s navigation app never gave him any idea that it would be that expensive.

In all, Elnaggar spent roughly $50 on tolls from Charlottesville to New York.

“If I had known beforehand how much I was going to pay for tolls, I would have maybe chosen a cheaper option – like taking a train or a bus,” Elnaggar said.

The experience planted a seed, one that came into full bloom at the Virginia Department of Transportation’s SmarterRoads Hackathon in Arlington last month.

Elnaggar and fellow UVA students Austin Angulo, Xiaoxiao Zhang and Wesley Daugherty won first place for creating FlexiRoute, a navigation app that they believe will help users avoid some of the pitfalls Elnaggar experienced on his fateful New York sojourn.

Elnaggar said current navigation apps usually provide a fast route (which includes tolls) and a much slower route (which usually doesn’t), but nothing in between.

The UVA team believes its app is different from others in that it allows users to generate routes based on alternative factors that they can assign importance to, such as cost, safety and exercise level. The app takes into consideration the cost of tolls, parking garages and public transportation, including bike-share services.

“Normally these types of options aren’t included in other routing applications or are only accessible by developing a route that is ‘public transportation only’ or ‘walking only’ with no multimodal options,” Angulo said. “Our application takes advantage of all of this and builds routes with all of these options available.”

Remarkably, none of the students on the UVA team knew each other prior to the hackathon, which gave teams 48 hours to come up with a mobile app that could solve a problem within the Virginia transportation sector.

“I had the coding background and they had the transportation background, so it worked out really well between us,” said Elnaggar, who also credited UVA systems engineering doctoral student Krista Rand for her help during a pre-hackathon brainstorming phase and UVA software engineer Simona Babiceanu for taking care of hackathon logistics.

In Arlington, the team won the $1,000 grand prize and also earned the “Idea Jam: Resiliency” award. The judging criteria was technical achievement, originality, impact, approach and polish and presentation.

“They did a great job with the data that was available,” said VDOT’s Virginia Lingham, who helped organize the event. “The complexity of the application that they developed and the way they were able to use our data that came from SmarterRoads and other open data sources out there was really impressive.

“It’s really amazing to see what these teams can come up with in such a short amount of time.”

Following the event, UVA team members said they were approached by a number of potential investors about their project.

As of now, the app only covers Northern Virginia. However, the team believes it has the potential to expand to other locales. Angulo said the trick is finding a consistent format for the various types of data.

“This has been an ongoing conversation in transportation for years now,” he said. “The importance of having consistent data-feed formats between towns, cities, localities and even states is paramount. It allows engineers to dream up and design effective tools for drivers all over the U.S. without drops in performance and functionality.”

Angulo said the team is getting closer to an improved version of the app that it plans to make available in the Apple App Store and Google Play.

“We believe we have a good algorithm and are actively seeking alternate data sources to offer even more preference options, like the level of scenery on routes,” Angulo said. “There are plenty of tweaks to be made, but we are getting there.”

Perhaps Elnaggar’s next trip to New York will be a little smoother?

“I think this app will help a lot of people, including myself,” he said, with a laugh. “People can choose the route that best suits them.”