ROTC Nursing Student Rolls Up Her Sleeves, Goes to Serve 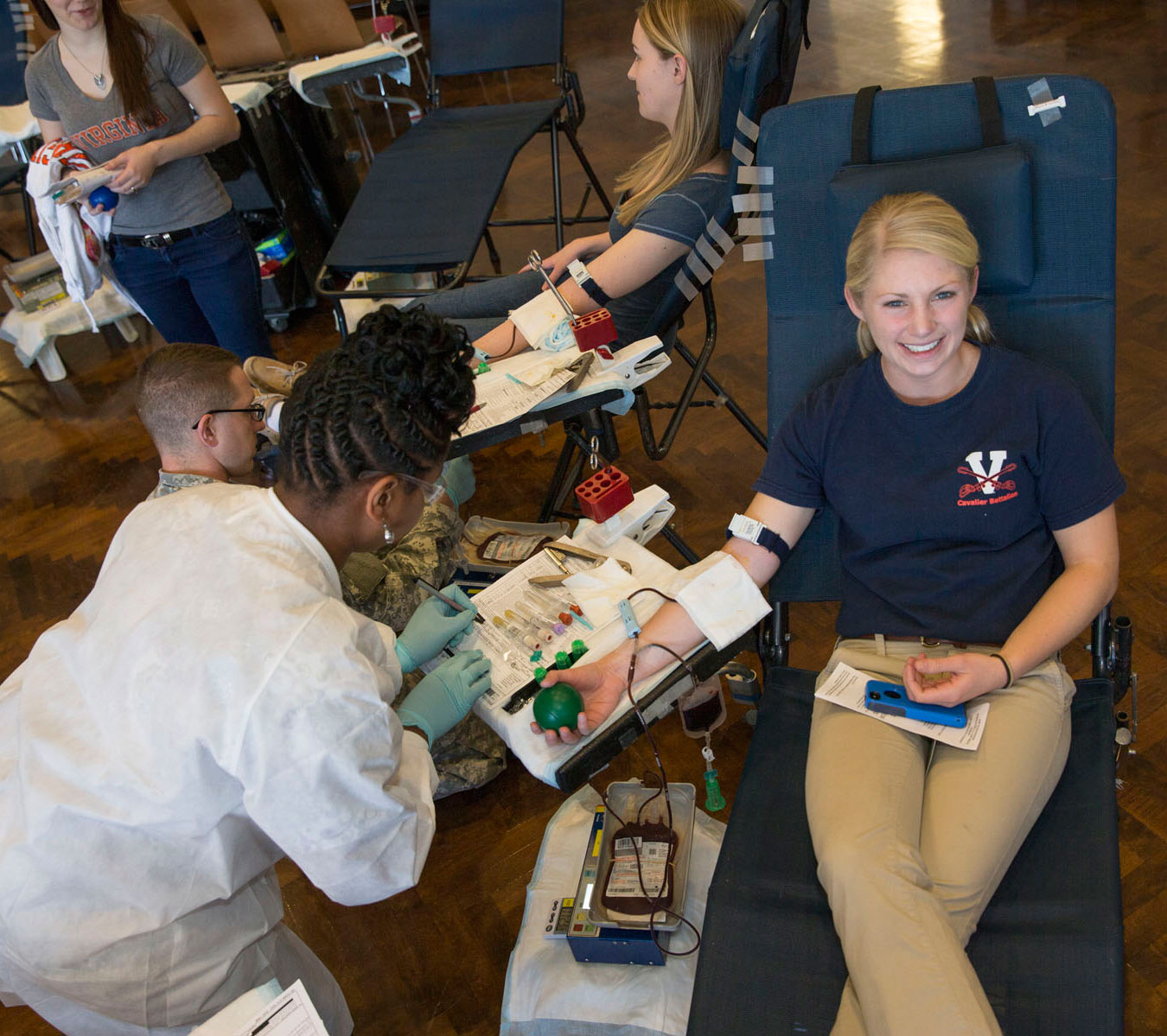 As both an Army ROTC cadet and a University of Virginia School of Nursing student, Kaitlyn McQuade is in a unique position to understand the military’s need for blood donations. And she did something about it.

“The military relies completely on donations to the Armed Services Blood Program,” she said. “If they are unable to get enough donations to fill the demand, the military has to purchase blood products from civilian hospitals.”

McQuade realized this the summer after her second year, while attending a month of Army training in Fort Lewis, Washington, where she first encountered a military blood drive.

Seeing the need, she also saw the solution. McQuade, 22, organized a blood drive in the Newcomb Hall Ballroom and brought in the Armed Services Blood Program from Fort Bragg, North Carolina. The program itself cannot solicit donors from outside the armed forces, but they can participate if invited by an outside agency. McQuade organized the blood drive two years in a row.

“I worked with their staff to coordinate all of the details of the drive, including dates, times and location,” she said. “To make the event a joint service event between the Army, Navy and Air Force ROTC programs at U.Va., I asked for volunteers from all three services to help the day of the drive with set up, clean up and getting people signed up and organized throughout the day. The volunteers also helped me with advertising the blood drive around Grounds.”

The U.Va. drive collected 71 pints the first year and 86 the second, used to treat not just active-duty personnel, but also veterans and their families. McQuade’s efforts on this year’s drive alone potentially saved 258 lives and saved the military about $43,000, according to estimates from the Armed Services Blood Program.

“Kaitlyn McQuade went above and beyond, getting everyone involved and taking the lead,” said Linda Ellerbe, public affairs specialist with the Armed Services Blood Program at Fort Bragg. “As a nurse she understands the need.”

While McQuade will graduate May 18, she has already identified next year’s organizers to ensure the program continues.

“Donating blood to the military is something that I am passionate about because it is a way to give to those who serve our country,” she said. “I can’t just walk away from a situation when I know that I have the ability to make a difference”.

“On a personal level, this is something I am passionate about because upon graduation I will be a registered nurse and a second lieutenant in the Army.”

The blood drive was a major challenge, but “I am confident that if there is something I want to achieve, I can find a way to make it happen, with some help from the right people,” she said. “I have learned that both mentally and physically, there’s a lot I can do that I never thought I could.”

McQuade also has that passion for nursing.

“I wanted to go to school for nursing because I wanted a job that would allow me to help people, and nursing allows me to care for those who are hurt or sick,” she said. “I will also be taking care of those who serve our country.”

McQuade owes the Army a minimum of four years of service because of her ROTC scholarship, but she is considering it as a career.

“I want to go to graduate school for nursing, but a lot of it will depend on what kind of nursing I want to do,” she said. “I enjoy emergency/trauma nursing as well as labor and delivery, which are two different directions.”

She will graduate from the Nursing School with distinction, and also has distinguished herself as a cadet. She completed the Leadership Development and Assessment Course at Fort Lewis in the summer of 2012, achieving the highest score on the Army Physical Fitness Test for her 400-person regiment. She has earned several ROTC awards, including a ROTC Recognition Award and a ROTC Medal from the National Society of the Daughters of the American Revolution’s National Defense Committee.

She has studied overseas, participating in the Nurse Summer Training Program at Landstuhl Regional Medical Center in Germany, and she was one of two U.Va. nursing students who spent a semester at the University of Auckland in New Zealand.

McQuade said these opportunities will influence the rest of her life. “I have met incredible people. I made the decision to join the Army during my first semester at U.Va., which shaped a lot of my time at the University. I had the opportunity to study abroad and travel to other countries, which gives you a great perspective on different cultures. I have learned a lot, not only academically, but about myself. Between challenging classes and the physical and mental challenges that ROTC demands, I have learned just how much I can accomplish.”

A native of Patterson, New York, McQuade learned about duty from her parents.

She said her parents did not push her into the military, but also that her father, who worked on Sept. 11, 2001 and through its aftermath, understood her decision.

“I could have just gone to school, but I chose to do more,” McQuade said. “When I graduate, I will be proud to have a nursing degree from U.Va., but what will have the most meaning to me, is my commission into the Army as a second lieutenant.”

A Year We Will Never Forget: 2019-20 in Review END_OF_DOCUMENT_TOKEN_TO_BE_REPLACED

‘What Will You Carry With You?’ Remarks From UVA President Jim Ryan END_OF_DOCUMENT_TOKEN_TO_BE_REPLACED