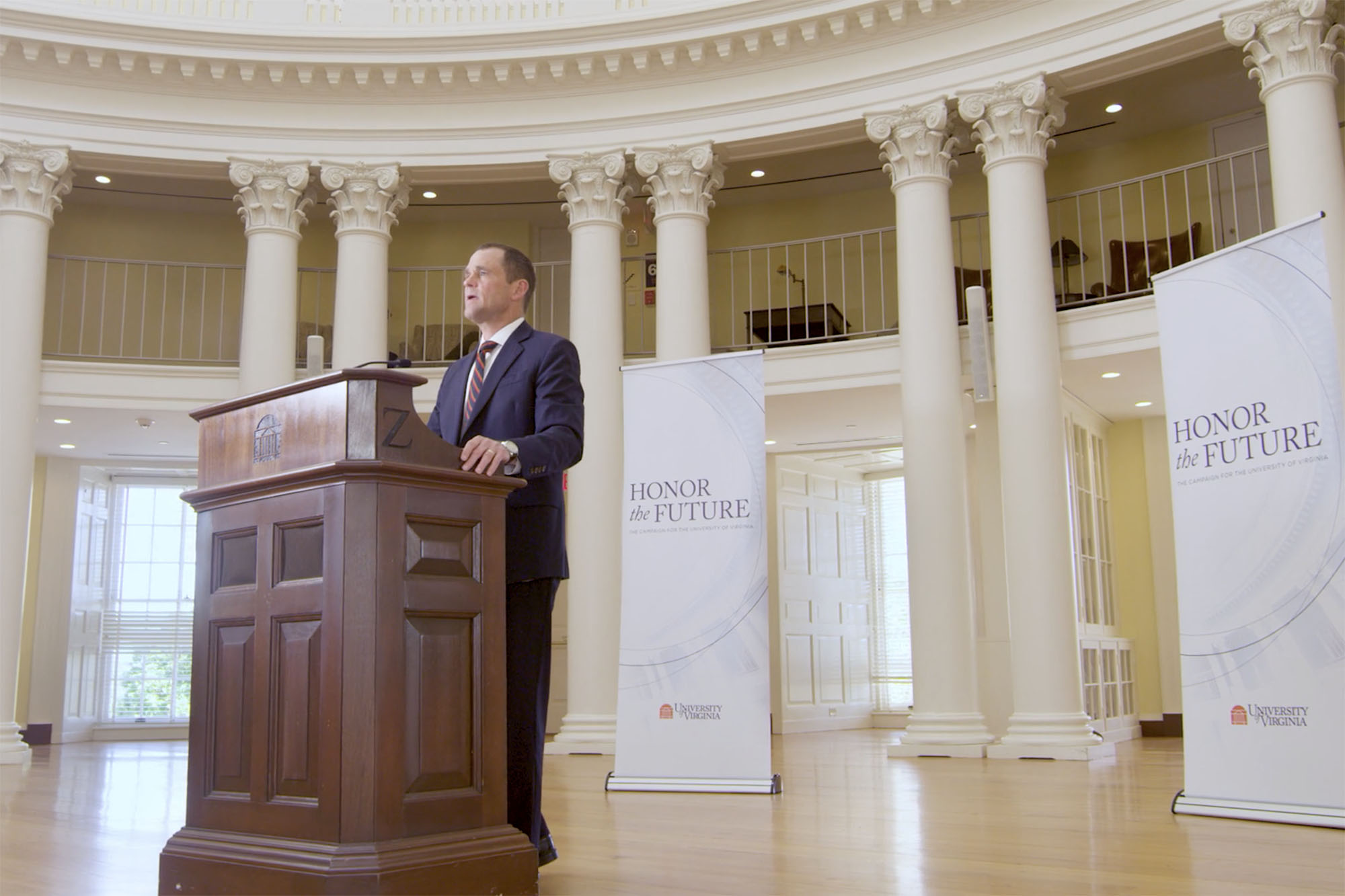 UVA President Jim Ryan said that despite the coronavirus pandemic, UVA has maintained steady progress toward its goals and stayed true to its values. (Photo courtesy UVA Advancement)

When he kicked off the University of Virginia’s “Honor the Future” campaign in the fall of 2019, President Jim Ryan delivered remarks he titled, “Dear Ms. Future.” In that imaginary conversation with the future, Ryan outlined his hopes for the University.

To put it mildly, a lot has happened since then. And in a recent campaign update titled “Back to the Future,” Ryan recounted the dramatic disruptions caused by the pandemic while highlighting herculean efforts by the University community to adjust to the impact of COVID-19, pursue the University’s mission, and continue to make progress on UVA’s strategic plan, “A Great and Good University: The 2030 Plan.”

“None of this was in the 2030 strategic plan or mentioned in our campaign kickoff,” he said of the myriad challenges and complications created by the pandemic.

Although it initially appeared the pandemic would hinder continued progress on the campaign and strategic plan, Ryan said, UVA has maintained steady progress toward its goals and stayed true to its values.

“The pandemic has taught us not only that we can adapt, but that we must adapt to changing circumstances in the world around us,” he said. “If we’re to shape the future, we must double down on the idea that the actions we take now will have implications for whether that future is more just, peaceful and prosperous.”

Ryan and Campaign Chair Peter M. Grant II hosted two virtual events on May 25 and 26 for the UVA community to share updates on the progress and priorities of “Honor the Future, the Campaign for the University of Virginia.”

Ryan described the pandemic challenges and how they have strengthened UVA’s commitment to a better future through a renewed focus on its founding values as well as recognizing the importance of embracing new values of connection, health and well-being and adapting to change. He added that the pandemic has highlighted the critical need for increasing investment in the areas of student experience and research.

Ryan also announced the campaign’s successful fundraising despite the pandemic, reporting that more than $3.5 billion has been raised toward the $5 billion goal. Examples of the campaign’s recent accomplishments include progress in fundraising for the School of Data Science and the Student Health and Wellness Center, as well as moving forward in planning for an interdisciplinary research building. Funding for Bicentennial scholarships, the Blue Ridge Scholars program, and the University Achievement awards totals $500 million, including the impact of matching funds from the Strategic Investment Fund. Fundraising for endowed chairs through the Bicentennial Professors Fund now totals more than $375 million, including matching funds.

Rising third-year commerce major and Blue Ridge Scholar Abiola Ogunkoya introduced Ryan from her home in New York City. Inspired by the pandemic, she created the Albemarle Mentorship Program in fall 2020 to aid students through the college application process.

The event concluded with a Q&A session led by Grant that included topics such as increasing opportunities for civil discourse, the Emmet-Ivy Corridor, the Honor Code, and the recently completed Final Exercises.