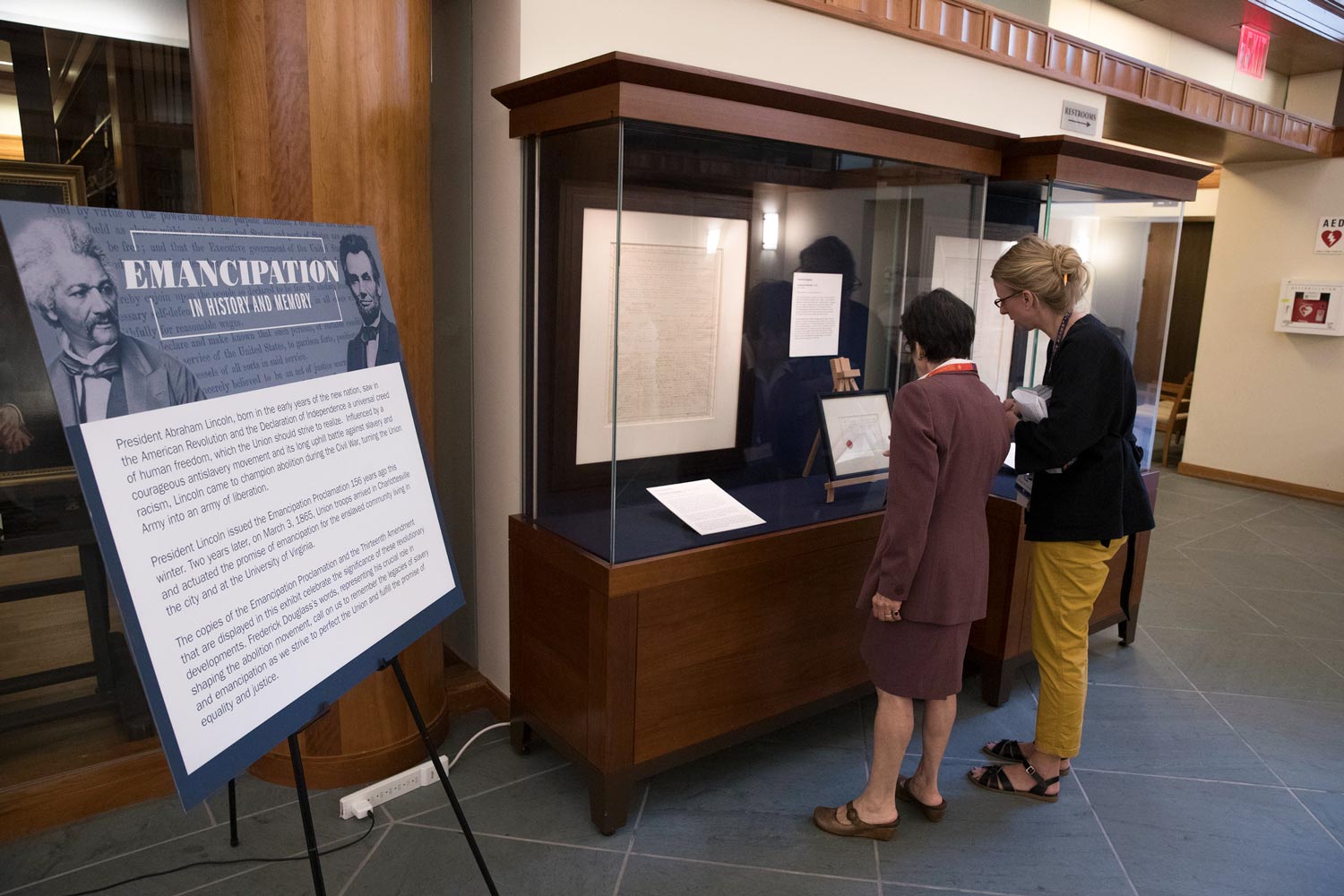 Rare copies of the Emancipation Proclamation, signed by President Abraham Lincoln, and the 13th Amendment abolishing slavery, as well as a unique note by the famous abolitionist Frederick Douglass are on display at the University of Virginia, on loan from a private collection.

Last weekend, the items on loan were displayed in the Rotunda’s North Oval Room to coincide with a Saturday program on “Emancipation in History and Memory.” That event included a panel discussion on the topic with several scholars, including Elizabeth Varon, Langbourne M. Williams Professor of American History and associate director of the John L. Nau III Center for Civil War History at UVA, plus an update on the Memorial to Enslaved Laborers with design team members Meejin Yoon and Eto Otitigbe.

Abraham Lincoln first issued the Emancipation Proclamation on Sept. 22, 1862, to take effect on Jan. 1 of the following year, although the Civil War continued until May 13, 1865.

The proclamation legally freed more than 3 million enslaved individuals in the 11 Southern states that had seceded from the Union. The broadside on display at UVA is one of 48 copies Lincoln signed in 1864 that were sold to benefit the U.S. Sanitary Commission, which cared for sick and wounded Union soldiers during the war. The National Archives in Washington, D.C. holds the original. 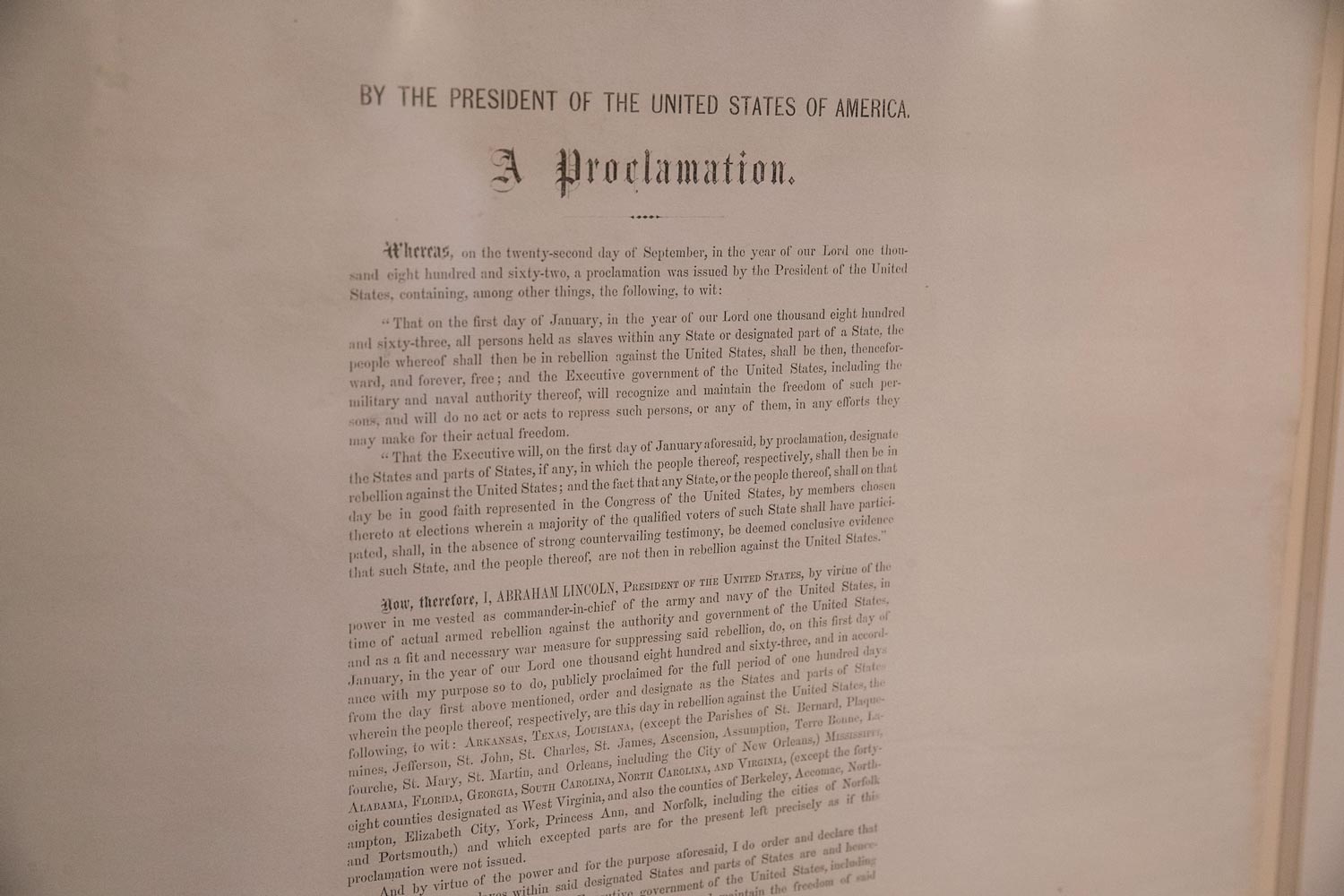 The 13th Amendment reads: “Neither slavery nor involuntary servitude, except as a punishment for crime whereof the party shall have been duly convicted, shall exist within the United States.”

To ensure the abolition of slavery, Lincoln lobbied for the ratification of the 13th Amendment up to the time of his death on April 15, 1865. In the months following his assassination, the amendment was ratified by the states and became part of the Constitution.

This rare congressional copy of the 13th Amendment was signed by Lincoln, as well as Hannibal Hamlin, vice president of the United States and president of the Senate; Schuler Colfax, speaker of the House of Representatives; John W. Forney, secretary of the Senate; 114 congressmen and 37 of the 38 senators who voted for passage of the amendment.

The 14th and 15th Amendments that followed during Reconstruction extended rights of citizenship and equal protection under the law to African-Americans.

The Right to Personal Freedom

Frederick Douglass, born into slavery in Maryland, escaped bondage and became a renowned abolitionist and orator who eventually helped recruit black Union troops. His autobiographical treatises and tireless political activism promoted emancipation as a moral crusade and Union war aim. The publication of his 1845 autobiography, “Narrative of the Life of Frederick Douglass,” and other writings revealed the cruel realities of slavery. At risk of being captured, he embarked on a speaking tour in the United Kingdom to solicit support for abolishing slavery in the U.S.

During this exile, Douglass likely penned the signed quotation from 1846 being displayed, complete with a red wax anti-slavery seal, “The Right To Personal Freedom.” 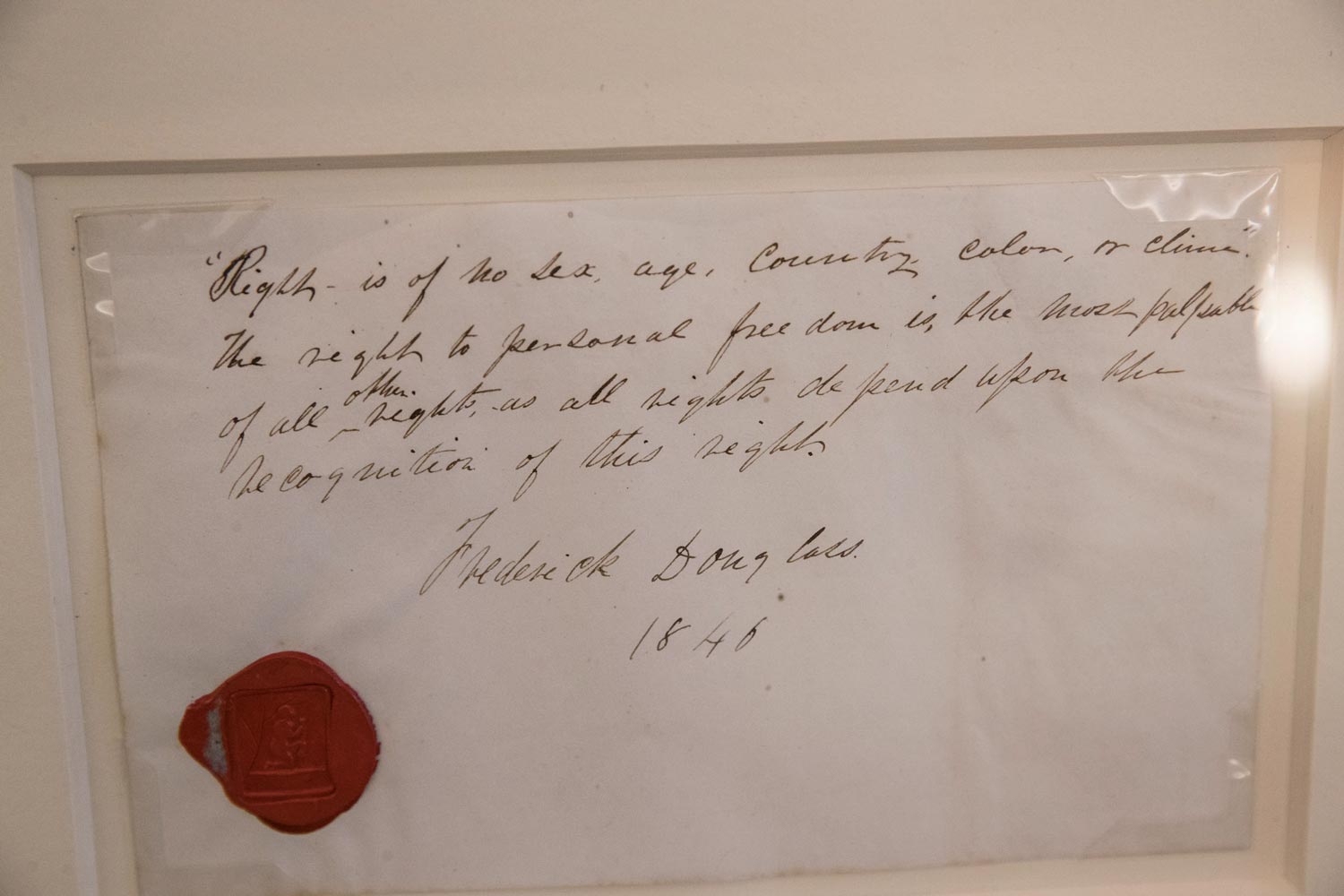 “Right is of no sex, age, country, color, or clime. The right to personal freedom is the most palpable of all other rights, as all rights depend upon the recognition of this right.”

Douglass also wrote, in 1863, that Lincoln “has dared to declare the truth of the Declaration of Independence.”

Emancipation in History and Memory

“These powerful documents remind us that emancipation is best understood as a process, rather than as a discrete event or moment,” Varon said.

“Frederick Douglass and Abraham Lincoln were essential to that process, and so too were thousands of enslaved men and women who fled Southern plantations during the Civil War, seeking refuge from slavery behind Union lines and aiding the Union war effort, and thousands of Union soldiers, white and black, who became an army of liberation,” she said.

The current cultural and political climate makes it an appropriate time to reflect on this time period, Varon said.

“In the midst of public debates over Civil War memory, and in this year marking the 200th anniversary of Frederick Douglass’s birth in 1818, we do well to reflect on emancipation and its many legacies for the freedom struggle,” she said.

The Office of the Vice President and Chief Officer for Diversity and Equity and other UVA sponsors presented Saturday’s events, with support from the University’s Board of Visitors.

“The documents on exhibit and the Emancipation in History and Memory program are made possible by the generous support of UVA Board of Visitors member John Griffin and his wife Amy,” said Dr. Marcus L. Martin, UVA’s vice president and chief officer for diversity and equity.

Frank M. “Rusty” Conner III, rector of the Board of Visitors, and John Macfarlane, a former board member who chairs the Memorial to Enslaved Laborers fundraising committee, also gave remarks.

A Year We Will Never Forget: 2019-20 in Review END_OF_DOCUMENT_TOKEN_TO_BE_REPLACED

‘What Will You Carry With You?’ Remarks From UVA President Jim Ryan END_OF_DOCUMENT_TOKEN_TO_BE_REPLACED