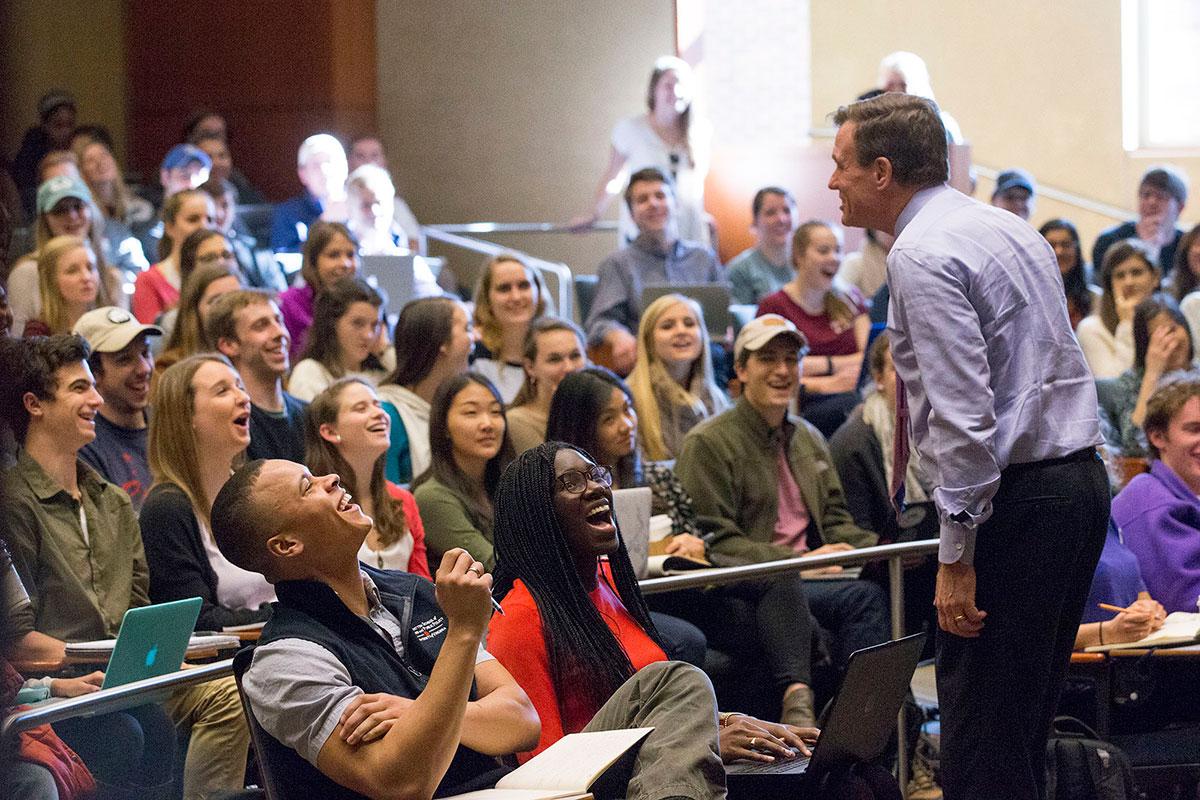 U.S. Sen. Mark Warner spoke Wednesday afternoon to University of Virginia students about the future of public policy and their role in it.

The Virginia Democrat’s talk was part of the Frank Batten School of Leadership and Public Policy’s course on “Public Policy Challenges of the 21st Century.” Taught by Gerald Warburg, a professor of practice, the goal of the course is not to offer different partisan talking points, but rather to expose students to the public policy challenges ahead and enhance their understanding of how policy solutions are adopted.

“The premise is very much in keeping with Mr. Jefferson’s philosophy that the young women and men of UVA are going to become leaders in our government,” Warburg said. “So the course is organized around a series of issues that we think will be important in the next 10, 20 or 30 years.”

Warner, also a former governor of Virginia and telecommunications entrepreneur, spoke to students about the future economy, especially those issues that are most likely to impact their millennial generation, such as the so-called “gig economy” – the growing number of companies, like Uber, that rely on independent contractors and freelancers to create their workforce – and nationwide student debt.

“For you guys, the whole notion that any of you are going to work at a single job for your whole career doesn’t exist,” Warner said. “For most millennials, the question is less ‘Where are you working?’ and more ‘What are you working on?’”

He said that as more millennials graduate and start taking non-traditional job routes, or plan to work in multiple jobs throughout their lifetime, the way the United States defines workers and their benefits must change.

“The way the law looks at this now is you’re either an employee or an independent contractor. You’re either a W2 or a 1099 [tax form], in terms of legal status,” he said. “That means if you are this cool gig economy worker, you’ve got no social insurance at all. So stuff is fine until the stuff hits the fan – as it always does – and then you’ve got nothing to fall back on.”

Warner encouraged students to think about this and how they might change the standard social benefits contract to support this new rising force of workers. He said that unemployment insurance often isn’t a viable option for gig economy workers whose incomes and working hours vary greatly over the year.

Instead, Warner suggested creating broader options for income insurance that would allow these workers to save for the slower periods in their schedules and spread out their overall income. He asked students to think about how employers could also benefit from being able to provide their workers with more portable benefit packages.

“Maybe we ought to have a little bit of policy experimentation in this whole transformation of work area and say, ‘Let’s reimagine what a social contract will look like,’” he said.

Following his prepared remarks, Warner took questions from students, including a few on the state of higher education and student debt in America. When asked how to lower the cost of college for Americans, Warner said that as a “business guy” he wants students to think first about how our nation can identify the most efficient ways to lower the burden of student debt.

He suggested that income-based repayment caps, employer participation in tuition repayment and better tools to research your potential debt before enrolling could all help curb rising student debt. Each of Warner’s solutions relates to one of his current bipartisan education proposals in the Senate.

The senator closed by reminding students that despite national concerns about the economy and the overall state of higher education, their UVA education makes them uniquely suited to take on the challenges of the future.

“We still live in a country where you get a world-class education that’s frankly second to none anywhere else in the world,” he said.

While Warner is the first Beltway visitor to speak in Warburg’s class this semester, he’s joining a long list of distinguished politicians who have come in the past and will be followed by a number of speakers from both sides of the aisle.

“We jokingly call this class ‘Batten’s greatest hits,’” Warburg said. “Our speakers represent a broad ideological balance. We try to cover a number of points of view, but all focused on the future, rather than the current political climate.”

The broad range of speakers has led to a major spike in the course’s popularity. Open to all undergraduate students, its enrollment has grown from 40 to 240 students since Warburg first started teaching it four years ago. Now, the course is also offered as a massive open online course and more than 50,000 students worldwide have viewed its lectures.