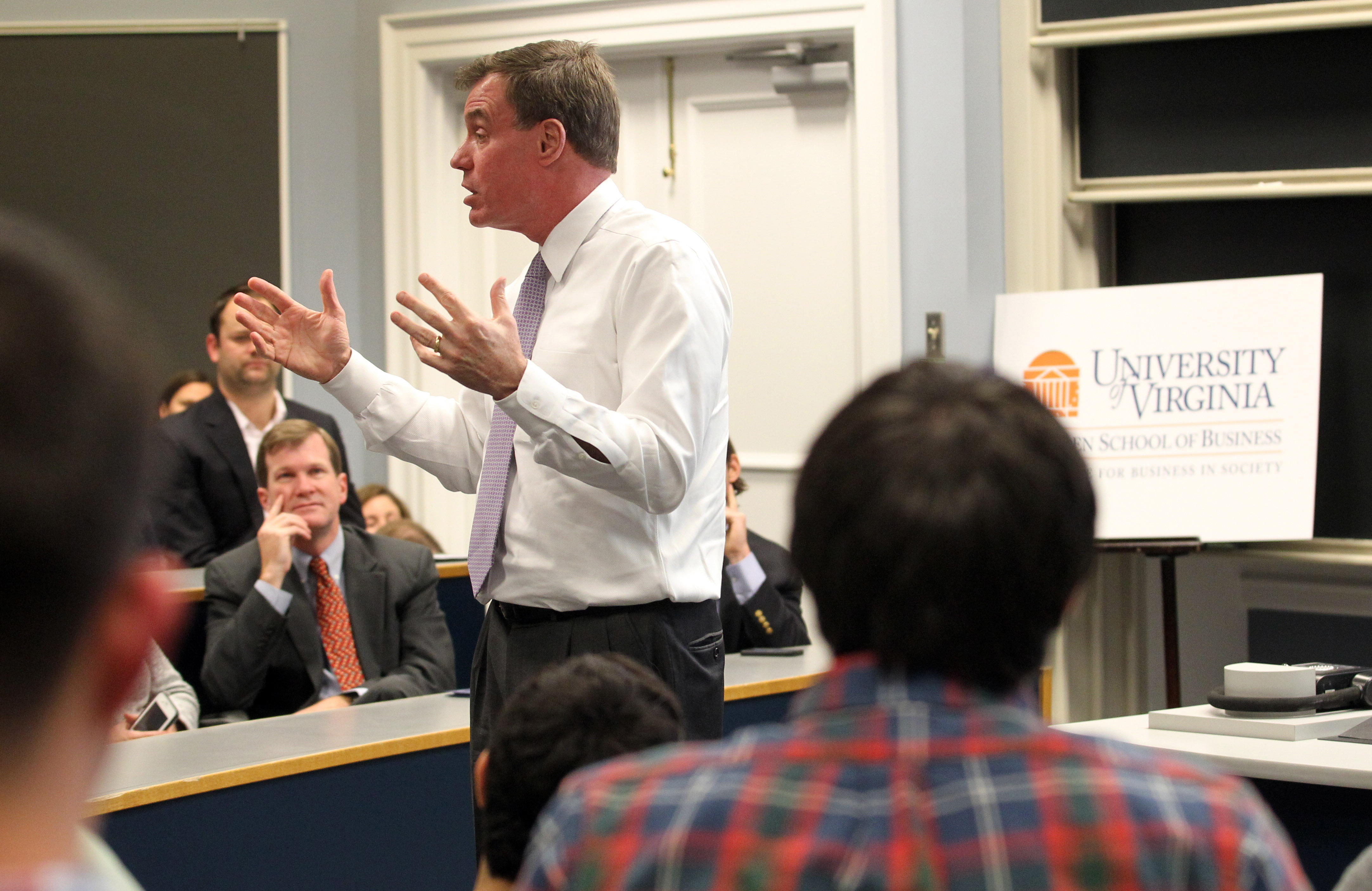 America’s biggest challenges include inequality, political polarization and gridlock, a large and growing national debt that threatens to crowd out key investments in the future, and a global competition for talent and capital that threatens America’s longstanding advantage in those areas, U.S. Sen. Mark Warner (D-Va.) said Tuesday at a graduate student town hall meeting at the University of Virginia.

The solutions, he said, include balancing the budget, electing leaders with more entrepreneurial experience and willingness to take risks, reversing the trend toward political polarization with independent redistricting of congressional districts, and immigration reform that will no longer push the best and brightest immigrants, educated at American universities, to resettle in other nations like Canada or the U.K. that have “rational immigration policy for the 21st century.”

Warner “comes from a remarkable business career as one of the co-founders of Nextel,” Darden School of Business Dean Robert Bruner said in introducing Warner to a standing-room-only crowd of more than 75 gathered in a Darden classroom. “And through his understanding of business, he brings a deeper, more nuanced understanding to public service and to public policy.”

First elected to the Senate in 2008, Warner is up for re-election this fall, facing a challenge from three declared Republican candidates, including Ed Gillespie, the former chairman of the Republican National Committee. Warner was governor of Virginia from 2002 to 2006.

Warner noted that he ran for governor based in large part “on the premise that, in an information age, you shouldn’t have to leave your hometown to find a good job.”

While the power of the information age is global, “We have candidly not done a very good job of re-empowering rural communities around America,” he said.

He said he supports the concept of “net neutrality,” the premise that Internet providers cannot favor one type of Web traffic over another, such as allowing a faster connection for video streaming from Hulu versus Netflix – a premise that was rejected by a D.C. Circuit Court of Appeals ruling last week.

On the other hand, Warner noted that as a co-founder of Nextel, he has “some sympathy as well for the network provider.” When, for instance, 25 percent of all bandwidth is devoted to Netflix’s streaming videos, he said, there must be a compensation model that ensures network providers can pay for the ongoing building and improvement of network infrastructure.

Crowdfunding may be another key boon to rural America, Warner said. Although the Securities and Exchange Commission is still finalizing regulations, the 2012 Jumpstart Our Business Startups Act – or JOBS Act – which Warner supported, will enable anyone to invest online in private companies in small increments, perhaps less than $5,000. “I’m a big advocate of crowdfunding,” he said. While it’s too early to tell how transformative Internet-based crowdfunding will ultimately be, it “could be a very powerful tool for empowering small communities,” he predicted.

While crowdfunding will inevitably result in some people being ripped off, Warner said, Internet-based crowdfunding must harness the online community’s ability to police itself against fraudulent activity, just as eBay has enabled billions of dollars of transactions with very little government regulation. Regulations can never be 100 percent perfect and “my fear is it will take so long to write the regulations, other countries will leap ahead of us,” he said.

The national debt is “the defining issue of our time,” Warner said. “We do an enormous disservice to all of you if we leave you with $17 trillion of debt that goes up $4 billion per night, and with a country that’s not able to invest in education, infrastructure and research to stay competitive.”

Congress has done “not near enough” on the issue, as it still has not recognized “that we must change our tax structure, we must change a little bit of our entitlement structure, so that in a global world we can stay competitive,” he said.

During his visit to Grounds, Warner also spoke with a cross-disciplinary seminar class on “The National Debt,” led by Darden professor Mary Margaret Frank, the academic director of Darden’s Institute for Business in Society, which organized the graduate student town hall in partnership with Darden’s Business and Public Policy Club.

Beyond the fiscal issues wrapped up in the national debt, there are “two overriding issues we have to grapple with,” Warner said. Today’s global economy is “all about the competition for talent and capital,” he said. America used to have a substantial lead on both fronts, but now faces global competition from several billion people in a newly connected world.

“Part of that talent battle is immigration reform, creating livable communities” and needing an education system that recognizes that all Americans will need some sort of skill that goes beyond traditional K-12 education, even if not all Americans need a college education, he said.

“On the capital side, we still have more of an advantage,” he said. America still has “far and away the most effective capital markets, the most robust early-stage venture funding.

“Over the last two years, I would argue that our governmental gridlock and lurching from budget crisis to budget crisis has actually been a net negative on economic growth in an almost unprecedented way,” Warner said. “When you look back historically, American public policy actions have either been neutral or net positive for the most part.”

Last week’s congressional passage of a budget covering the next two years “gets us to net neutral” which may result in GDP growth next year of 3 percent or 4 percent, he predicted.

“Think what we could do if governmental policy actions could be consensus-building enough to actually be net positive toward economic growth,” Warner said.

While government leaders have thus far failed to tackle these challenges, Warner said, “the incremental amount of changes we need to make are so small, it’s almost un-American,” for a nation that has, in the past, tackled “big things” like fascism, communism, the Civil Rights Movement and putting a man on the moon, he said.

“There needs to be a sense that we’re all in this together.”

At UVA, There Is a Club for Everyone END_OF_DOCUMENT_TOKEN_TO_BE_REPLACED