For more than six decades, the United States Army Judge Advocate General’s Legal Center and School has made its home at UVA, sharing a constant flow of ideas and a common goal to train the nation’s next generation of leaders.

For more than six decades, the United States Army Judge Advocate General’s Legal Center and School has made its home at UVA, sharing a constant flow of ideas and a common goal to train the nation’s next generation of leaders.

Much like the university where it’s made its home, the United States Army Judge Advocate General’s Legal Center and School can trace its roots back to America’s Founding Fathers. At the request of George Washington in 1775, the Continental Congress appointed the army’s first lawyer, known as a judge advocate general.

Judge advocates – or “JAGs,” as they are more commonly known – have been an integral part of the Army ever since, but it wasn’t until World War II that the Army recognized the need to offer a specialized training course for the attorneys in the JAG Corps. A temporary school began operation in the 1940s, but by the time the Korean War began, the government was searching for a more permanent home for JAG education.

The University of Virginia proved the perfect fit for the Army’s needs and so began a 66-year relationship that has fostered decades of shared teaching and student mentoring by some of the country’s most prominent legal minds. 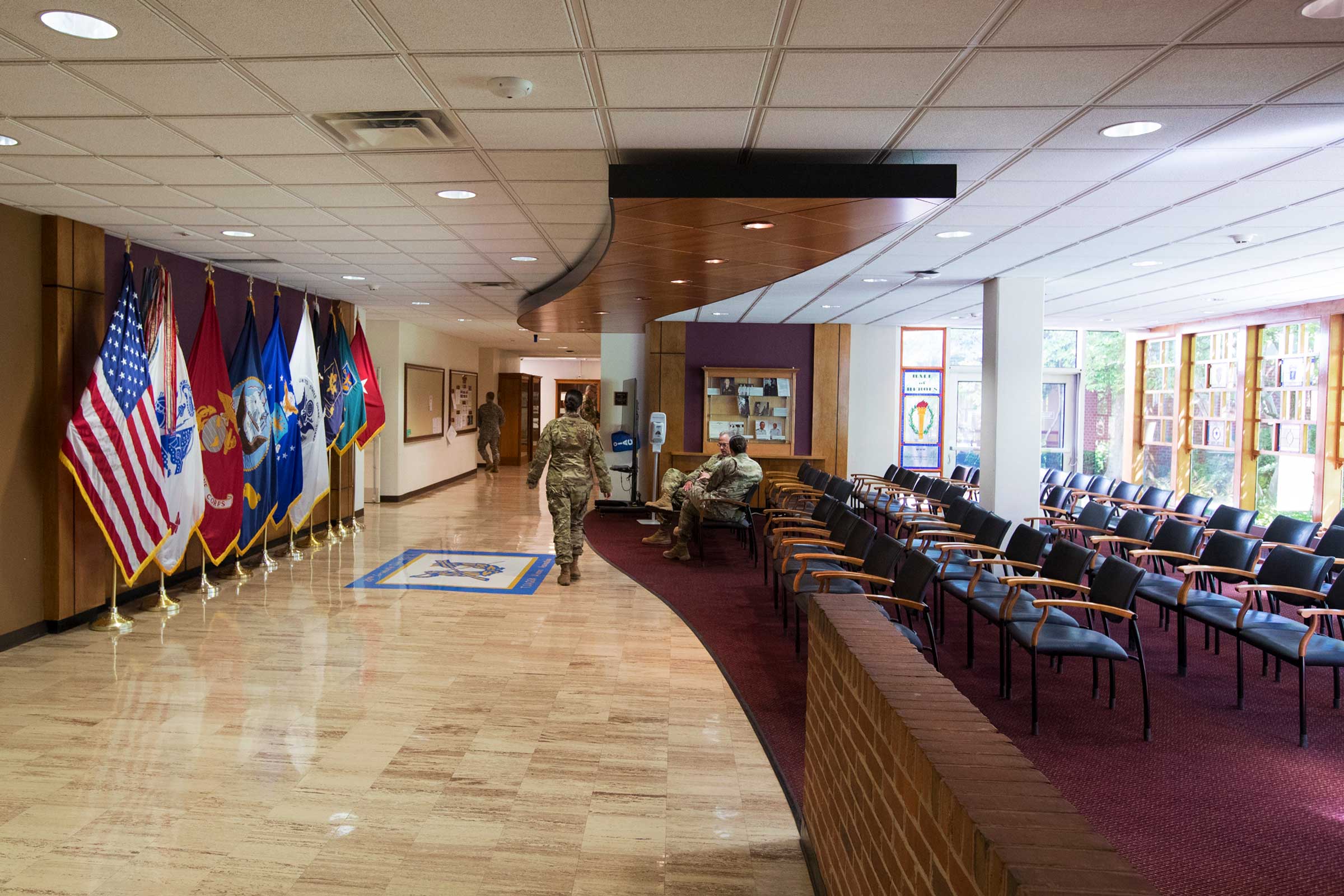 “One of the reasons we chose the University of Virginia was that it had the biggest law library in the South. The second reason was its proximity to Washington, D.C.,” Fred Borch, the JAG regimental historian, said.

“The Army also knew that it was a first-class university, but then the clincher of the deal was that the president of UVA offered us new dorm space behind the Law School to house our bachelor officers.” 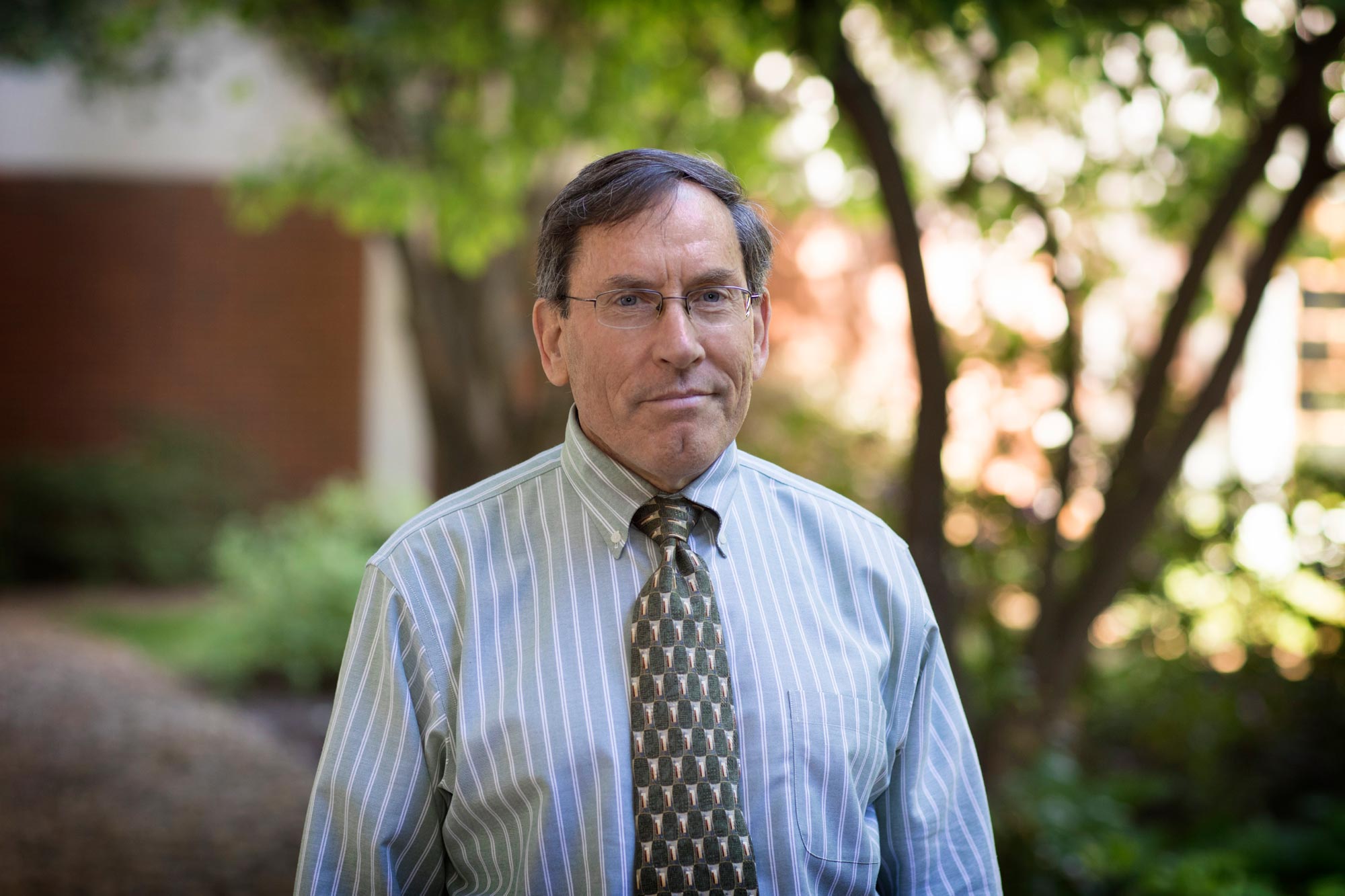 The JAG Corps moved into Kerchoff Hall – just behind the UVA School of Law’s former location in Clark Hall – in 1951 and followed the Law School to North Grounds in 1975.

A special agreement between the JAG Corps and UVA also allows students of both schools to take classes at either institution, honing their skills in diverse legal fields.

Today the JAG facility serves as both a school and a museum showing the progression of military legal history.

Inside the library, students find historic photos and uniforms, as well as rare historic pieces like carved wooden depictions of the Nuremberg Trials. 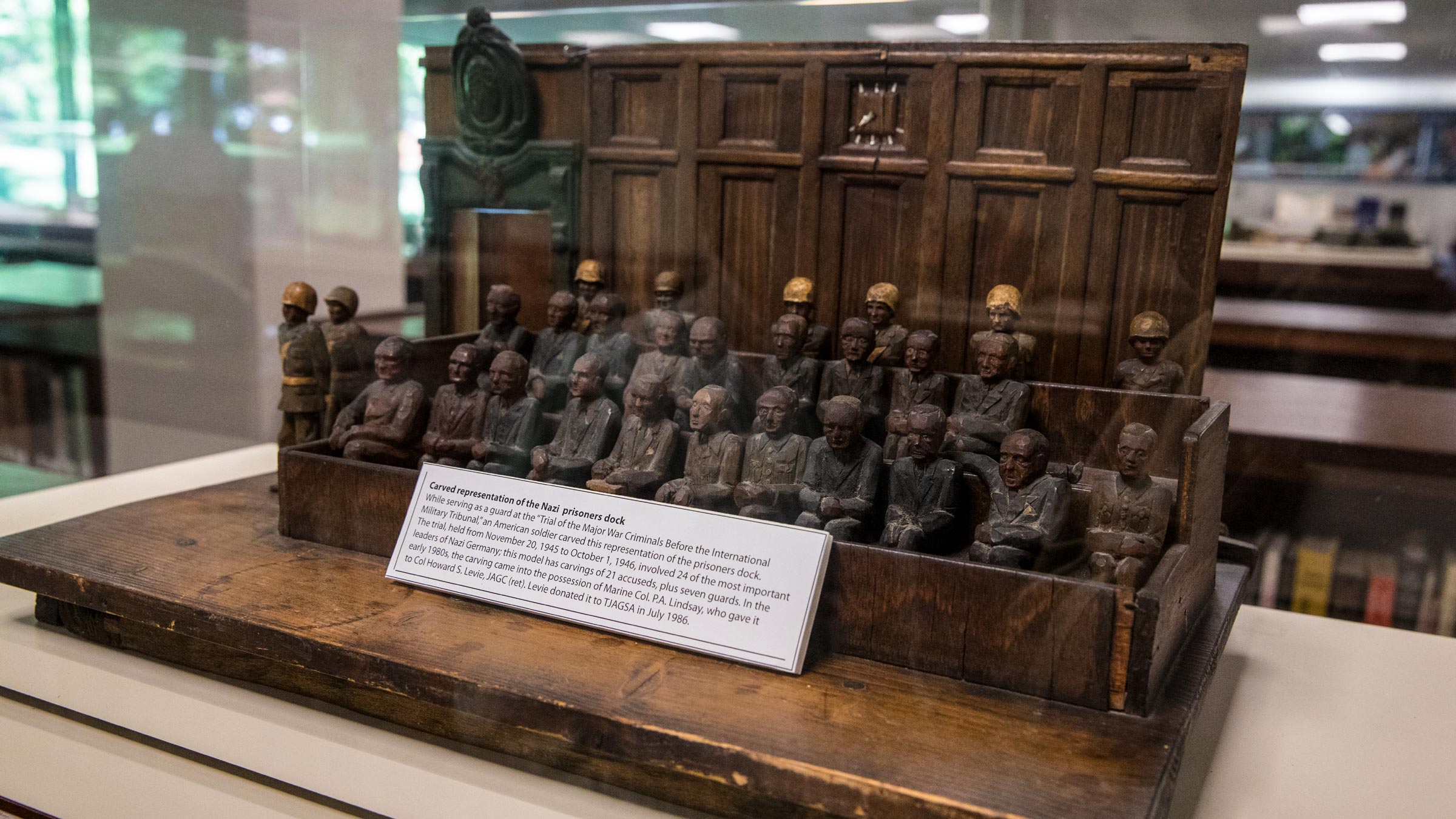 Among the artifacts and books, visitors will find officers pursuing a variety of different courses of study. The JAG School offers three primary educational tracks, in addition to numerous short courses for officers and training for ancillary legal positions, such as paralegals.

For recent law school graduates who are joining the Army JAG Corps, it’s the first stop after their Direct Commissioning Course at Fort Benning, Georgia. They receive special training in military justice through the JAG School’s Officers Basic Course before they are sent to their first posts.

The largest group of students consists of JAG officers with eight to 10 years of experience who are returning to the school to earn their Master of Laws degree. Of all the military JAG schools, the Army’s is the only one accredited by the American Bar Association to offer this degree.

Finally, there is a small group of long-time officers who return to the JAG School to receive certification to become judges. 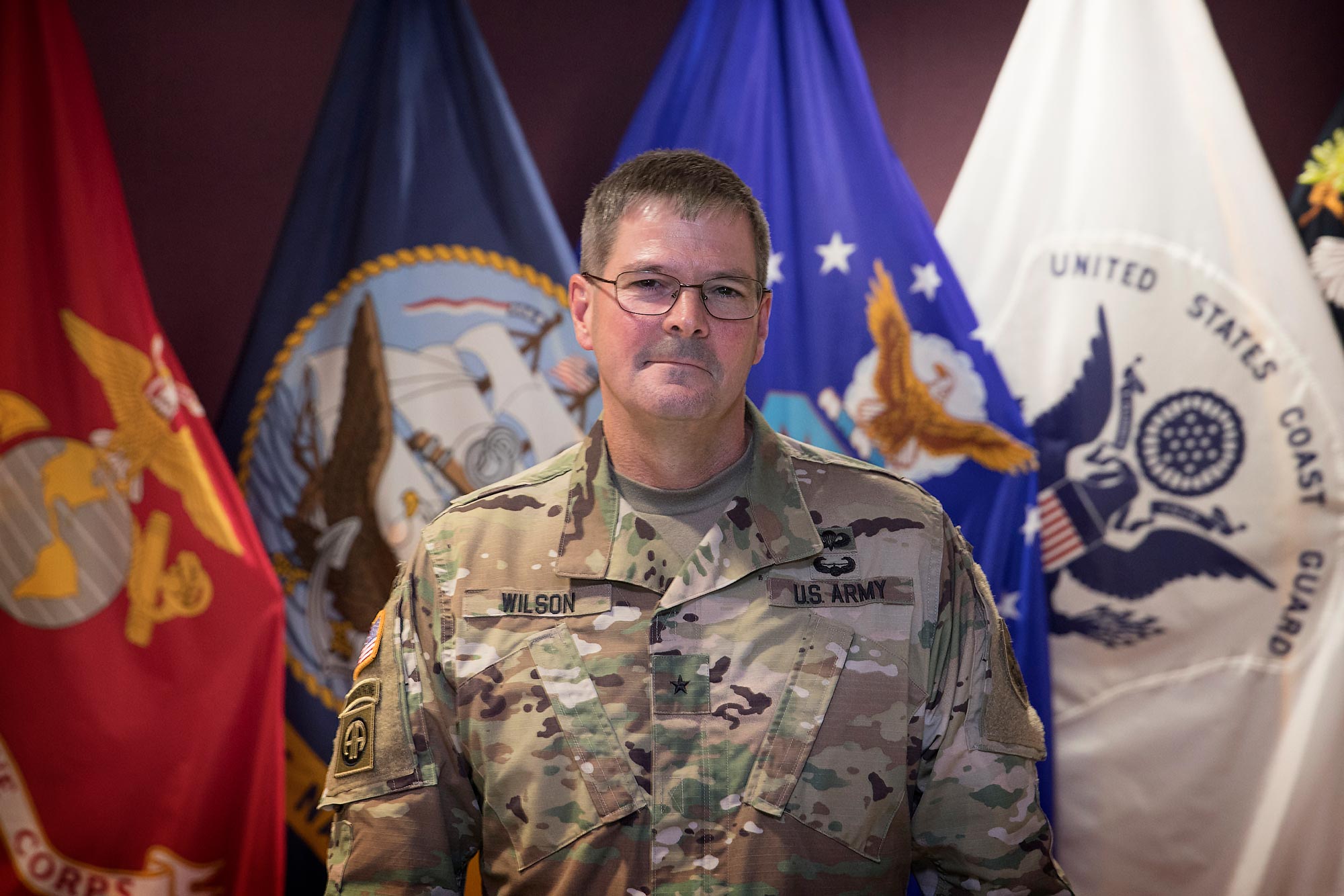 The faculty is made up primarily of experienced officers and retired veterans of the JAG Corps. In addition to experience in standard legal work, each instructor brings a unique set of field experience to the classroom.

“Probably the most interesting aspect of my career has been the deployments and the operational law, the targeting of enemy combatants and that type of thing,” said Brig. Gen. Paul Wilson, the JAG Legal Center and School commander from 2016 through 2017. “You can be on an operations center floor with the senior leadership of your unit, and you’ve got a drone or an aircraft overhead with coordinates and you’re figuring out whether you’re going to drop munitions. We spend a lot of time working hard together to avoid civilian casualties.”

Experiences like that, where JAG officers are called to advise the commanders on the legality and potential ramifications of their actions in the moment, are one of many aspects of military legal work that Wilson enjoyed sharing with UVA’s law students and faculty. As a graduate of UVA’s School of Law himself, Wilson also knows how pulling back the curtain on military opportunities can help bring in new generations of young lawyers.

“I wound up in the Army because I played softball in the North Grounds Softball League against JAG faculty members and they said, ‘Hey come join the Army, we’ll send you to Europe,’” he recalled. “It was a three-year commitment at the time, so you could see Europe and then get out and take another job. Twenty-seven years later, I’m still here.” 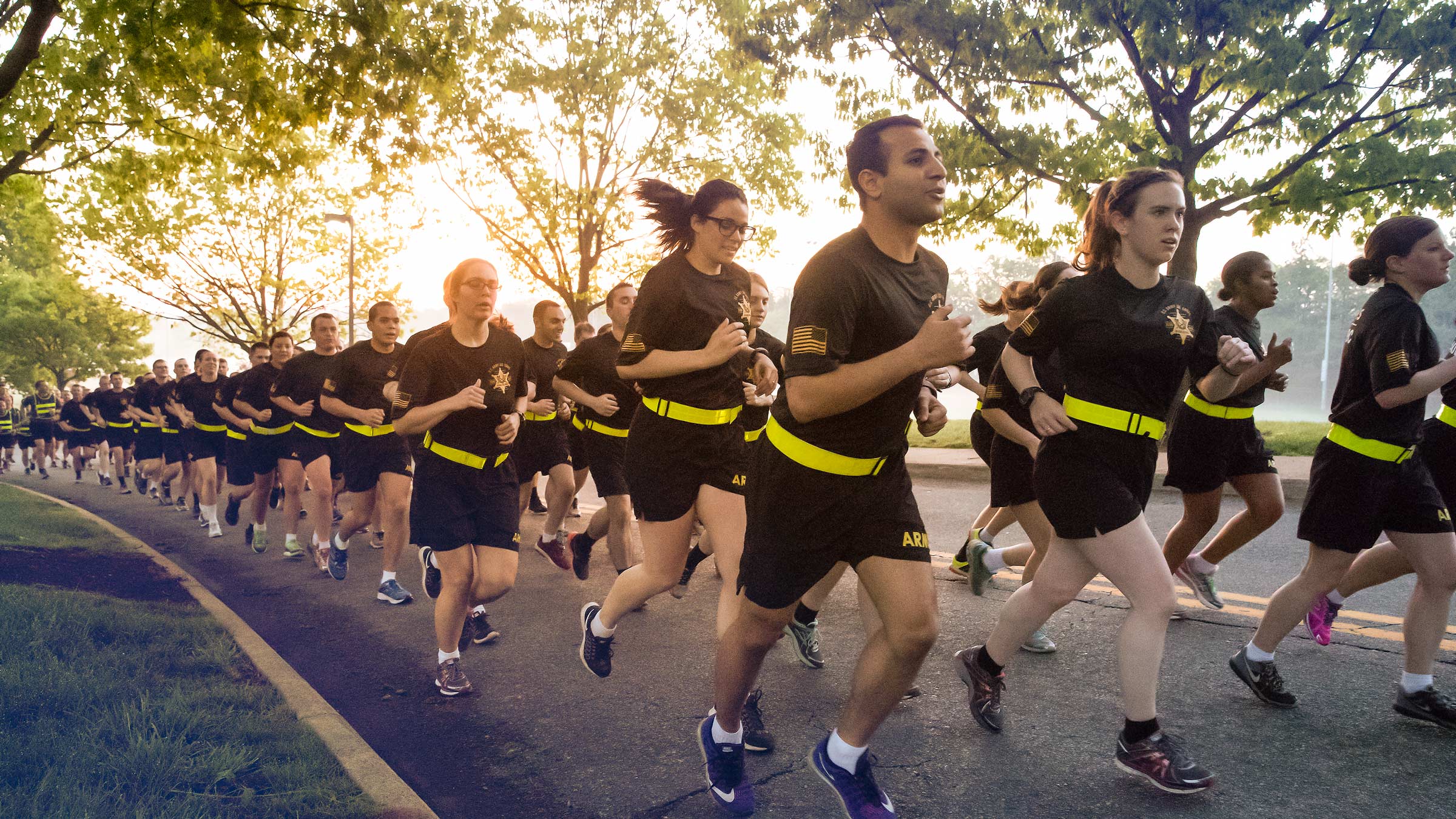 Like many of his fellow faculty members, Wilson attributes his longevity in the JAG Corps largely to the caliber of people it has allowed him to work with. There’s a sense of palpable camaraderie at the JAG School, a feeling that is on full display when officers assemble at dawn for the school’s company run. 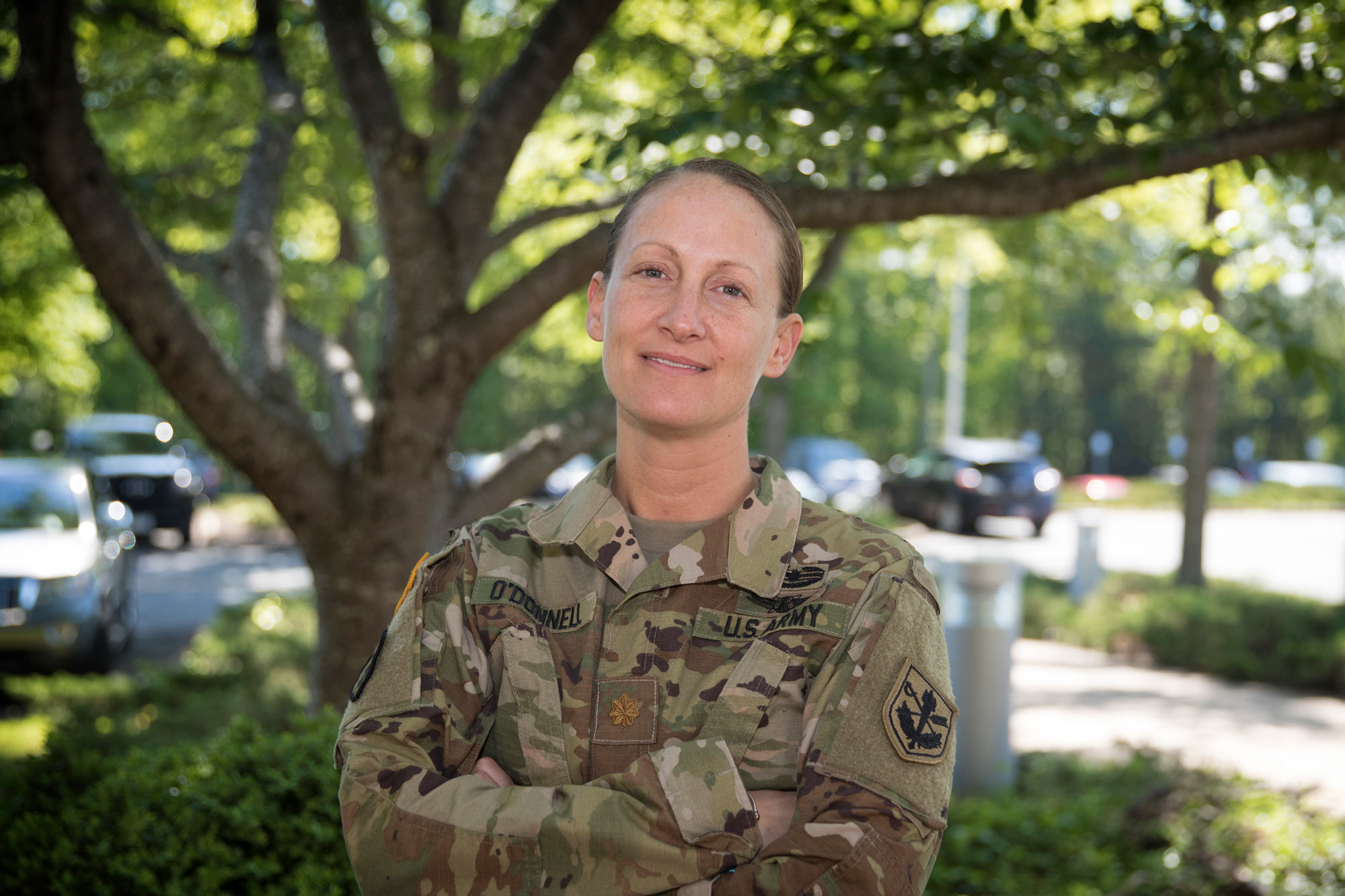 Maj. Laura O’Donnell, who teaches legal writing to the school’s Master of Laws candidates, originally joined the Army because she felt compelled to serve her country after the terror attacks of Sept. 11, 2001. She was commissioned as an officer after graduating from law school in 2006, and soon found that she, too, wanted to stay in the service much longer than her original four-year commitment.

“The work is rewarding and challenging,” O’Donnell said. “Every day you come to work is different. You’re not going to do the same thing twice. But mainly, you will not meet any better collective group of people. The people are absolutely amazing.”

She’s leaving active duty this summer after more than a decade of service, but she’ll remain part of the Army Reserve. 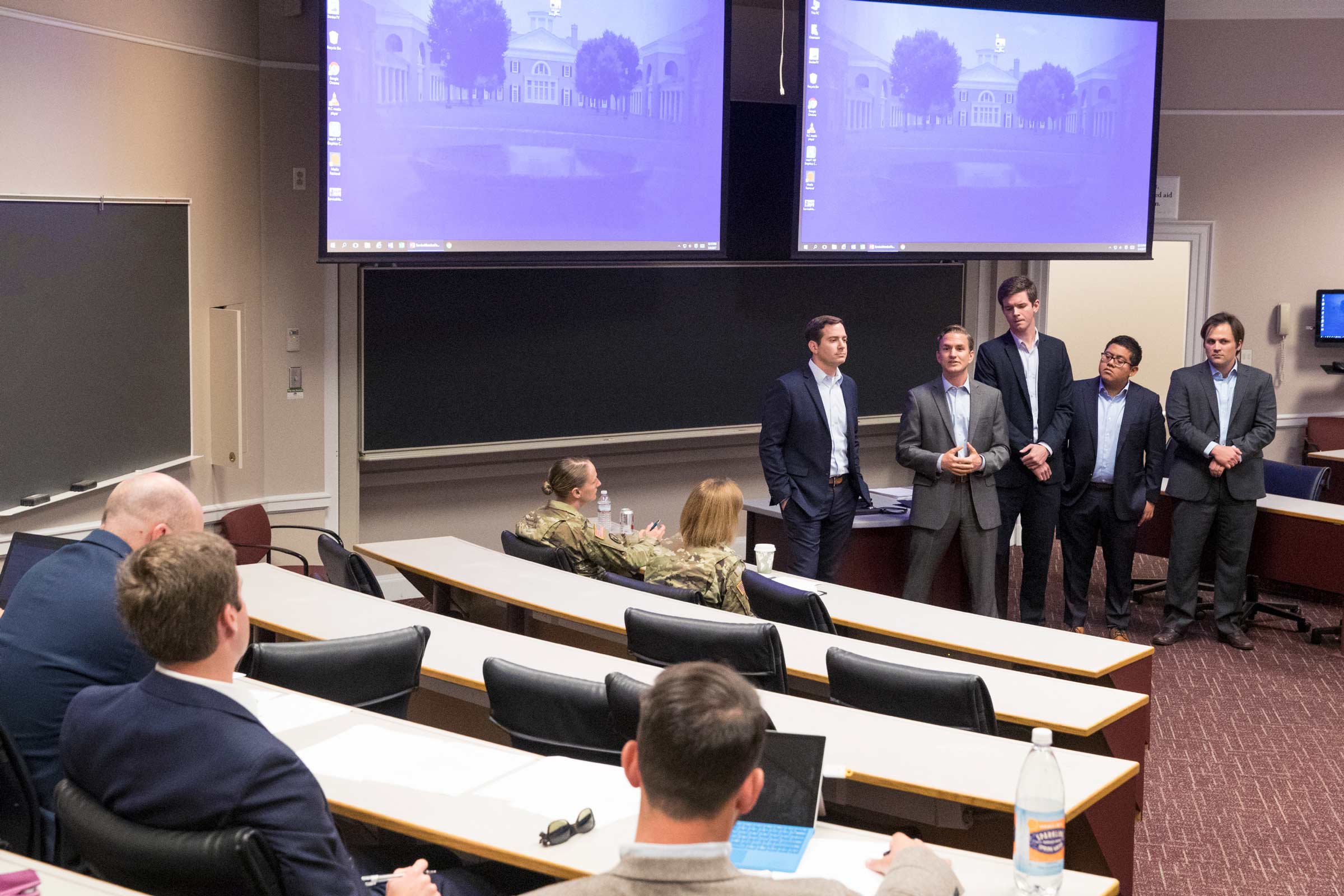 Part of the diversity of practice that Wilson and O’Donnell describe comes with the connections that are built with UVA. In addition to their regular teaching duties, O’Donnell and many of her peers work directly with UVA law students to help prepare them for the rigors of the courtroom.

O’Donnell has coached multiple mock trial teams in the past and has volunteered as a moot court judge. This year, the JAG School also partnered with the Darden School of Business for a portion of its “Leading Global Strategic Change” class taught by Kristin Behfar, an associate professor of business administration.

Students in the course were split into teams for a portion of the semester devoted to researching and proposing new solutions to help military families maintain close relationships with service members while they’re deployed. This spring, O’Donnell and fellow instructor Col. Terri Erisman  acted as judges when each of the five Darden teams proposed their solutions before the class. 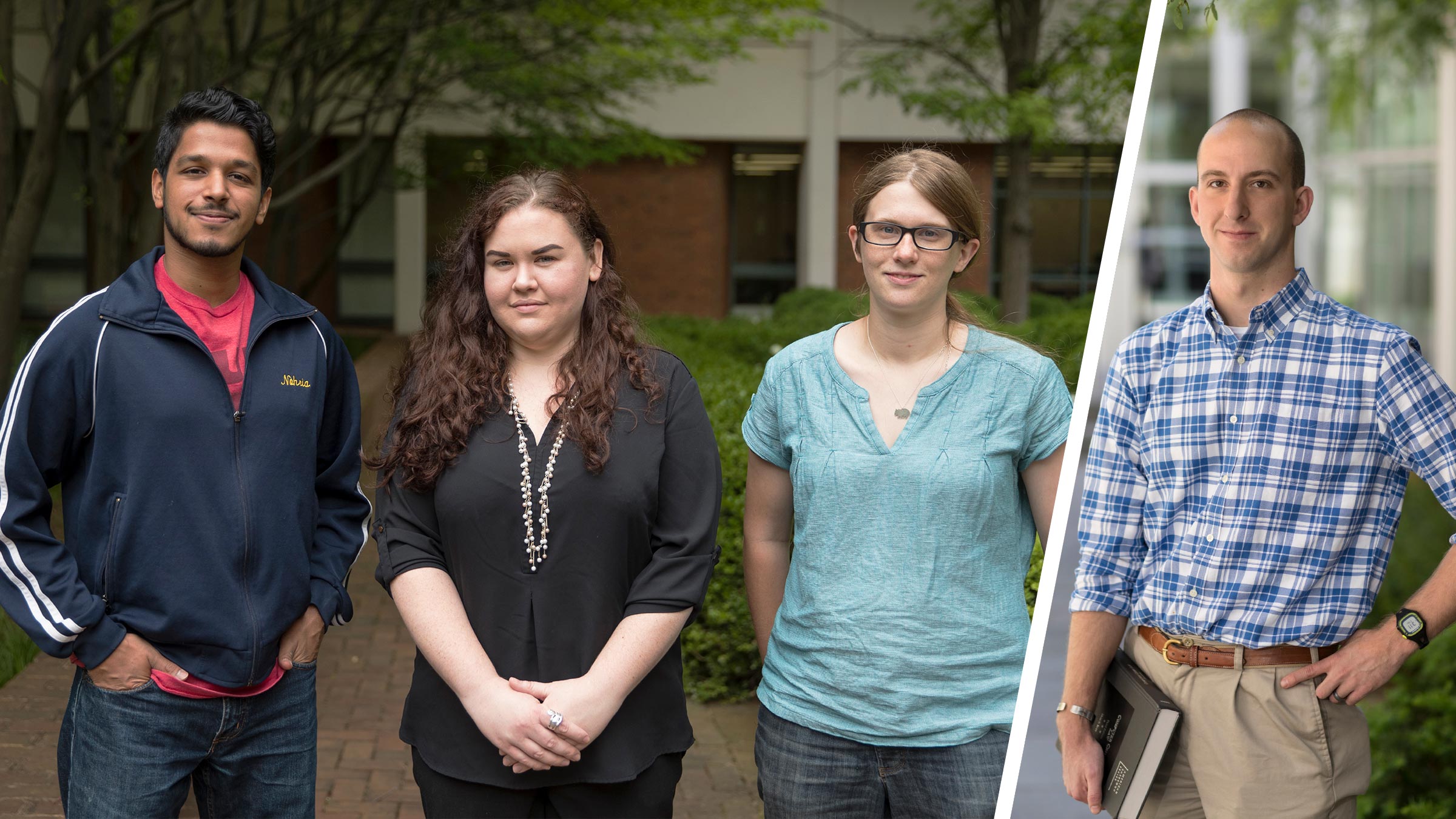 While Darden is beginning more new collaborations like this, generations of law students like Katie Mullaly, Rachel Gallagher and Shalin Nohria have benefited from the open-door policy between the JAG and Law schools. UVA law students regularly sign up for courses at the JAG School covering topics related to military justice and government operations.

“The classes are really great because you learn just as much from the JAG students as you do from the instructors,” Mullaly said.

The JAG students who share courses with the UVA law students are at the JAG School to earn their Master of Laws degrees, so they have already been practicing law and on active duty for about a decade.

Occasionally, active duty members of the military will also attend the Law School with the intent of immediately transferring to the JAG Corps once they’ve earned their degree. J.R. Lystash, now a captain in the Army and a recent graduate of the Law School, chose to enroll at UVA while still on active duty.

“I wanted to be a lawyer forever. I was planning to just do my four years in the Army and then attend law school, but then I really loved the Army for its camaraderie and ethic,” Lystash said. 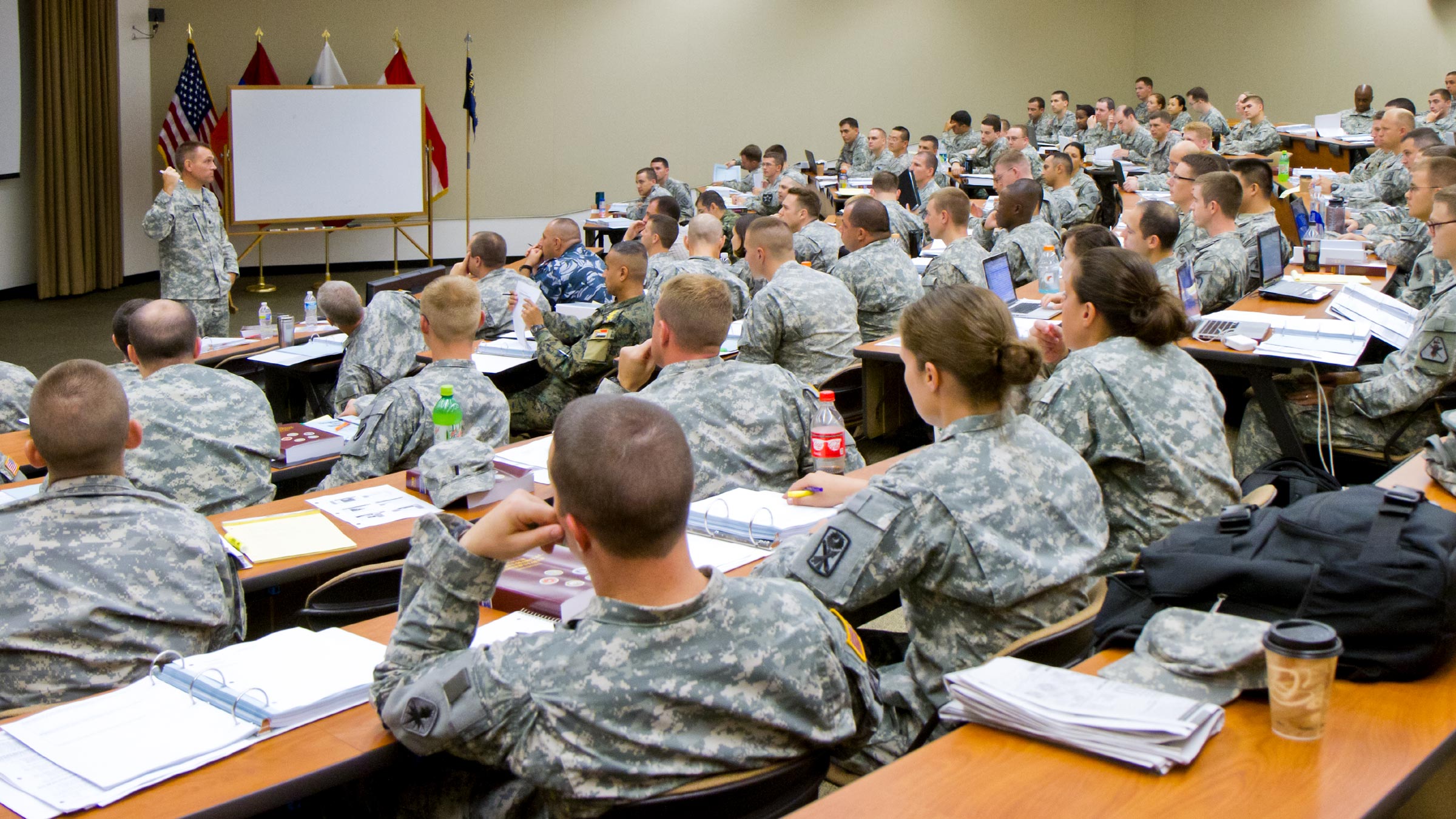 Even for those law students who never intend to join the Army, there’s a lot to be learned from JAG courses.

“The three areas where I think we get most of the curiosity is military justice, government contracts and international operational law,” said Moe Lescault, the associate dean of the JAG School. “Probably one of the biggest is operational law. Through deployments, we bring an experience to the table that shows how this theoretical stuff is playing out in the real world.” 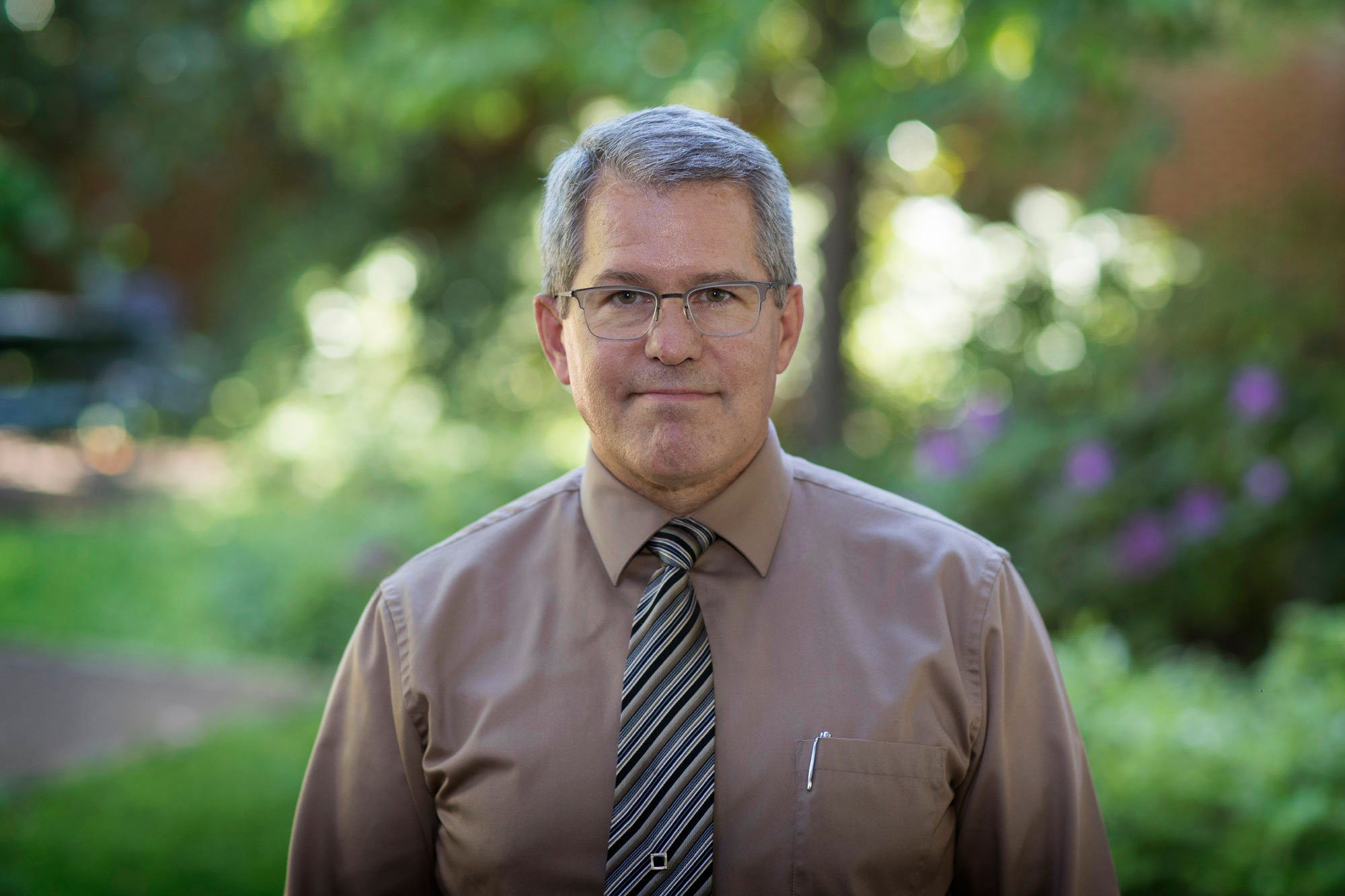 As they’re learning about international law in military practice, students also have the opportunity to learn foreign perspectives on U.S. operations and military justice.

The Army has longstanding legal training arrangements with U.S. allies, and reserves space each year for foreign JAG officers to attend the master’s program.

This year that included master’s students from Egypt, South Korea and Armenia.

“Most of these military schools are partly about developing personal relationships,” Borch said. “So the lawyers who are here in our yearlong masters course – they’re the future leaders of law in the Army – are meeting their counterparts in Egypt and other countries who are probably going to be the future leaders in their home country.” 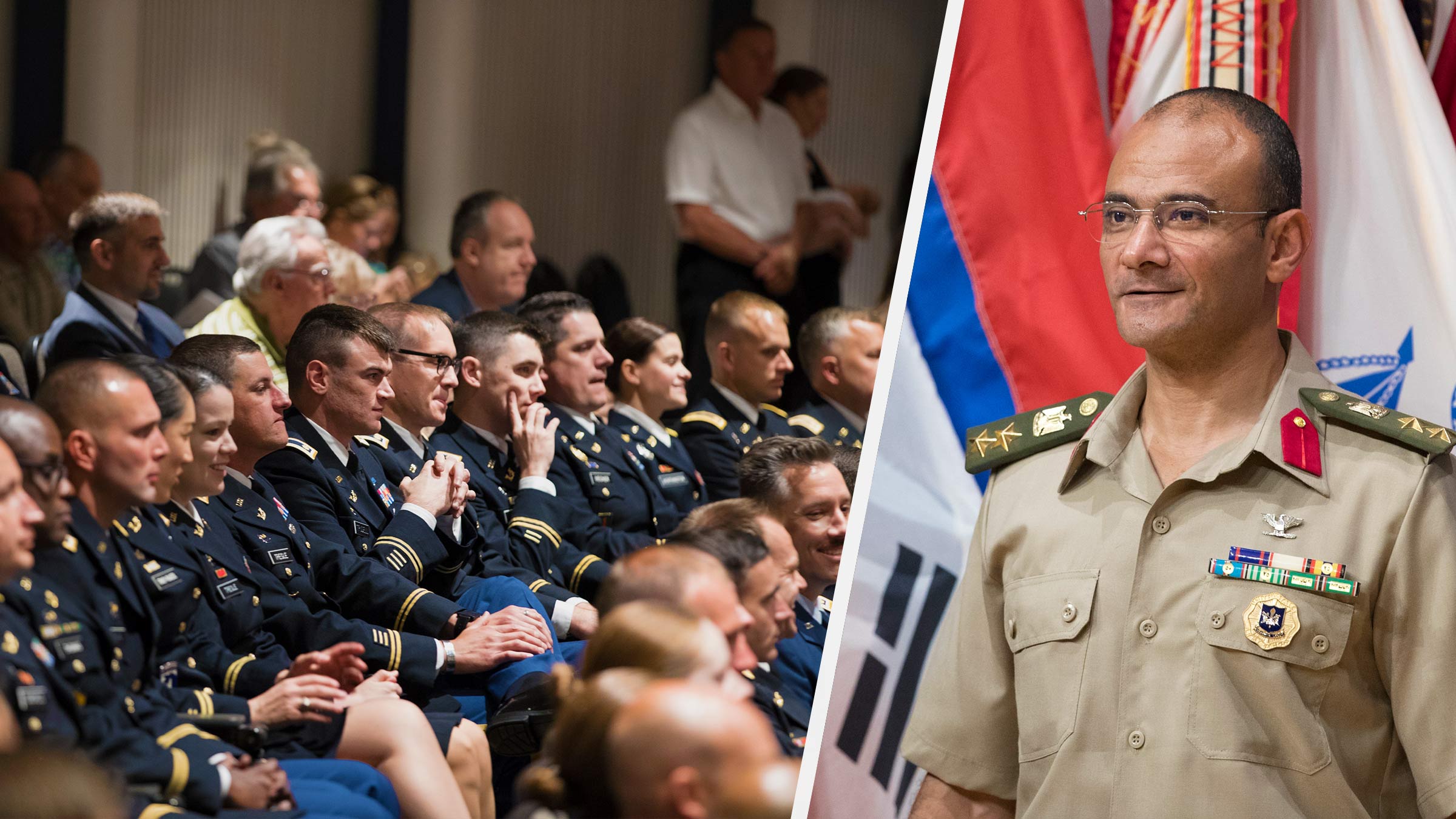 Whether a student is attending JAG courses as a member of the U.S. military, a foreign officer or as a UVA law student, that sense of future leadership and shared duty runs throughout their programs. The JAG School relishes the opportunity to be intertwined with UVA not only because it helps broaden the educational experience of all those who attend, but also because it helps identify young legal leaders who could join their ranks.

“The person we want as a judge advocate is someone who is committed to a higher calling and wants to serve and be part of a bigger team,” Wilson said. “As you spend a lot of time in the military, you will see that along with integrity, we prize above all the ability to lead.” 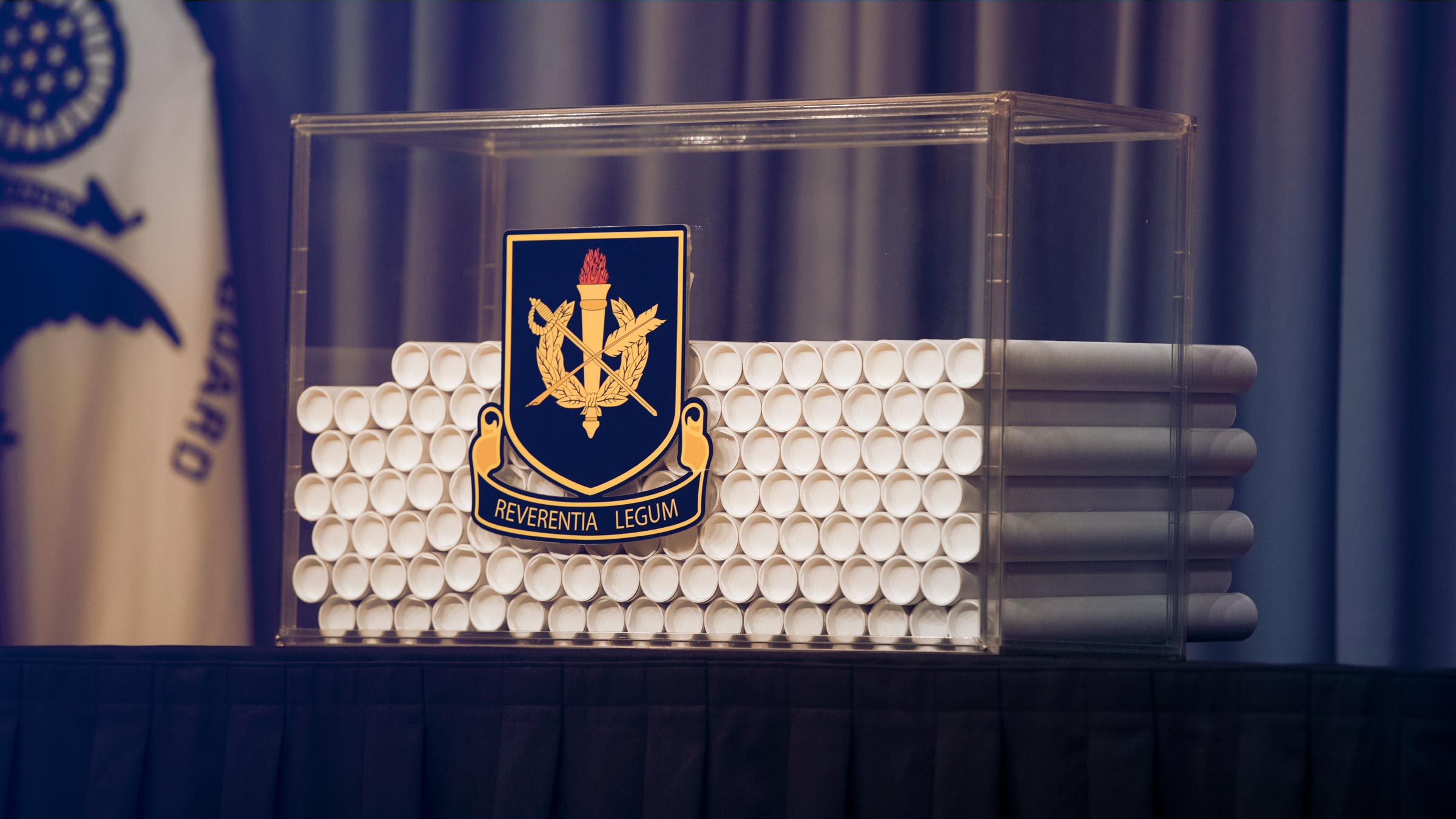