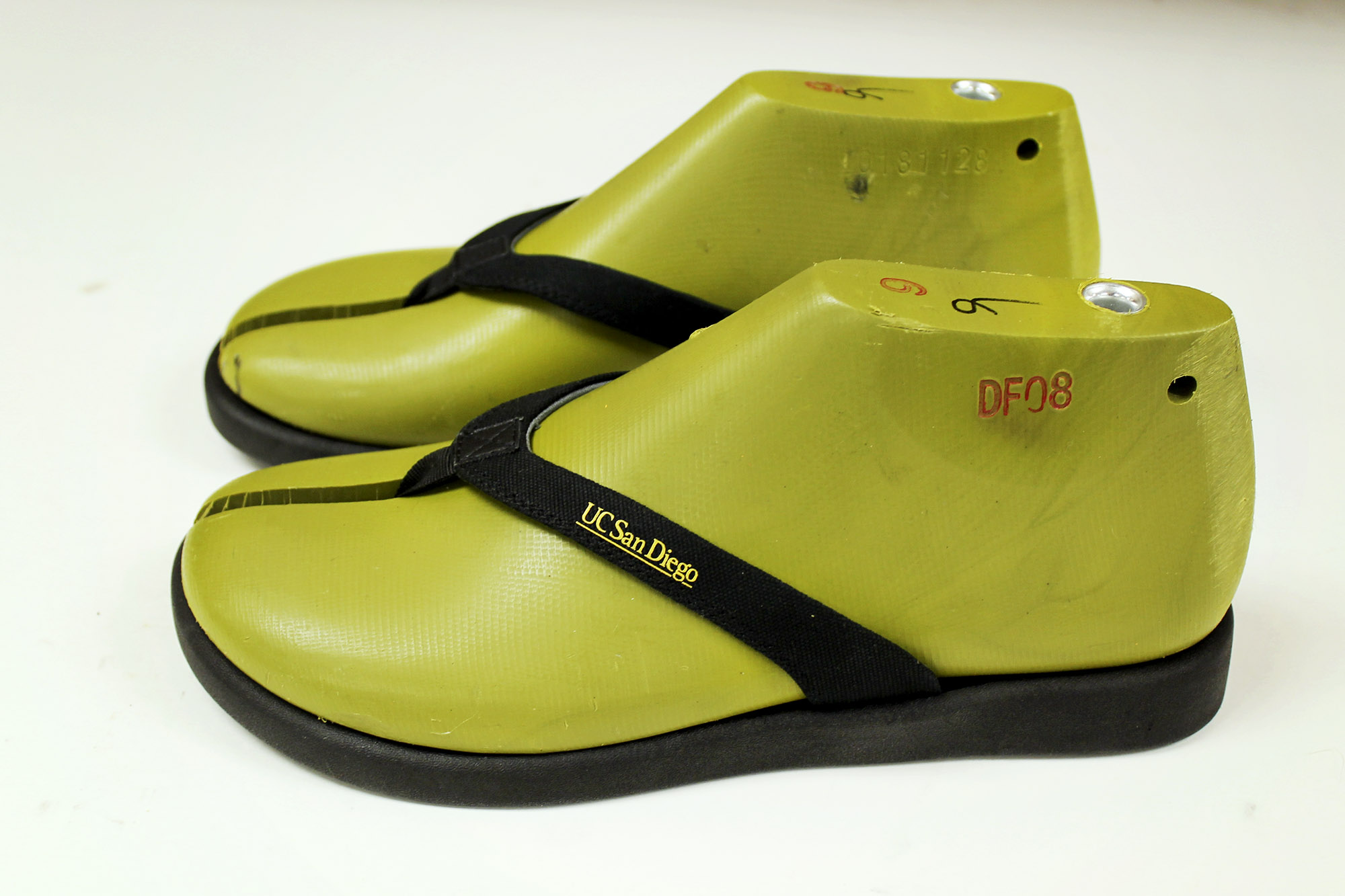 University of Virginia alumnus Tom Cooke and his wife, Claudette, live in Solana Beach, California, a coastal town with some of the world’s most beautiful beaches. With houses built high atop bluffs that overlook the ocean, the town, located 25 miles north of downtown San Diego, gives new meaning to the word “picturesque.”

And then there is the awesome surf spot known as Cardiff Reef, which Cooke – an avid surfer – puts right up there with any other spots in the state.

But there is one thing that can really irk Cooke about his surroundings.

It happens when he comes across old flip flops and other discarded objects made of cheap plastics in and around the beach area – things that are just waiting to pollute the ocean.

Of course, the problem is by no means unique to Cardiff, yet that doesn’t take away the sting every time Cooke sees it.

That was one of the main reasons Cooke, who graduated in 1996 from UVA’s School of Engineering and Applied Science, joined Algenesis, a material science and technology company, as its president about nine months ago. The startup company with an environmental bent has found a way to make a flip flop that is made from plants (yes, plants!) and is 100% biodegradable.

The team developed an algae-based polyurethane – the foamy plastic that’s commonly used to make the footbeds of shoes and sandals – that it believes can revolutionize not only the footwear industry, but the entire plastics sector.

During a recent phone interview from his home in Solana Beach, Cooke could hardly contain his excitement.

“It addresses all three of the major forms of pollution associated with petroleum plastics,” Cooke said. “It has lower carbon emissions, which results in cleaner air, and because it biodegrades in the natural environment, it reduces both land and sea pollution. It won’t trash the planet like we’ve done to date.

Cooke is not your typical Californian. He grew up on a five-acre farm in Winchester before coming to UVA on a partial track-and-field scholarship.

Cooke’s father had taught him to pole vault, and he wound up being part of successful Cavalier track teams alongside Tiki and Ronde Barber (who also excelled on the football field). 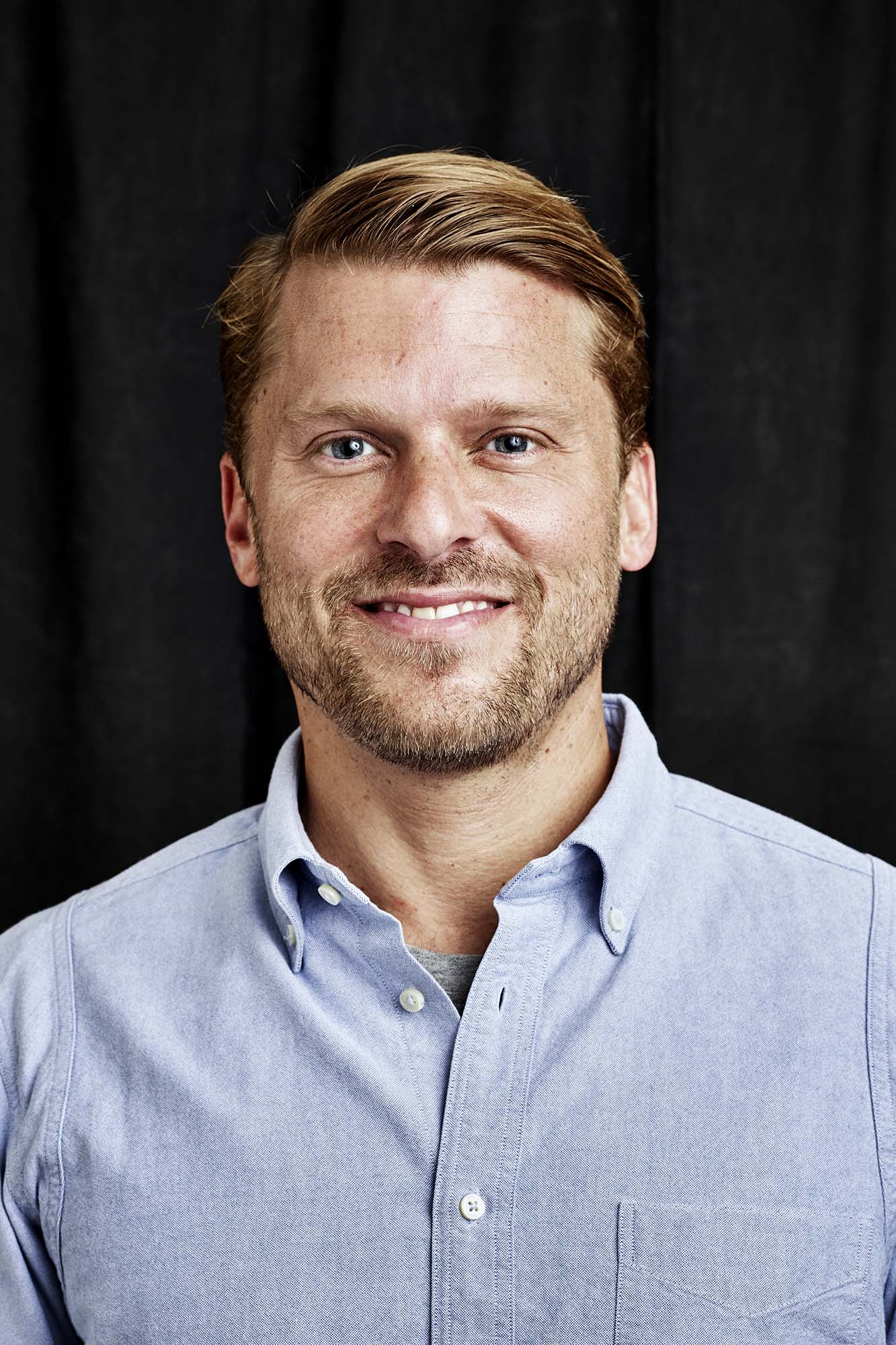 At UVA, Cooke majored in mechanical engineering and minored in fine art. During his time on Grounds, Cooke said several professors had a huge impact on him. One of his favorites was Timothy Scott, who spent 35 years as undergraduate laboratory director in the mechanical engineering department and is now at Sweet Briar College.

“I was a pretty wild kid back then, and what [Scott] stressed was practicality in our education,” Cooke said. “It wasn’t just a lot of theory and core math and science. He was more interested in how those things were applied and the type of real-world skills you would need.

“In his lab class, he taught me to hand-draft blueprints and mold drawings for a number of projects.”

Cooke said that specific skill was what landed him his first job out of college, working in product development at Vans, the Los Angeles-based skateboarding shoe and apparel company. As part of the interview process, Cooke was asked to create blueprints for shoe soles.

Cooke, a big fan of skateboarding as a kid, had always been interested in shoe design, but over time shifted his career path to product management and marketing.

“That was a super fun time,” Cooke said. “It was an opportunity to be their partners and make their signature shoes for them and interact with them on a really personal basis.”

“As a young guy, and especially as a skateboarder, that was a really cool brand to be a part of,” Cooke said. “I grew with that company professionally and was able to contribute as the business grew from $100 million to $1.5 billion in revenue over a 16½-year stretch. That was really fun.”

Outside of work, Cooke, due to injuries, had stopped skateboarding and taken up surfing. It was around that time, in January 2013, that he headed south to San Diego to become vice president of global product for the Reef brand, known for its sandals and flip flops.

“I always needed to have my personal passion and skills and talents kind of merge,” Cooke said. “That was always my core idea. I didn’t just want to do something for making money or just because it was a job. It kind of had to meet certain criteria. And that was a super successful formula for me.

“It was logical for me to go that way. It was like, ‘Do something you love and it won’t feel as much like work.’ And so it just so happened that my passion for skateboarding and surfing that led me into this amazing career with brands like Vans and Reef.”

It was while working at Reef and continuing to fall in love with surfing that things began to crystallize for Cooke. 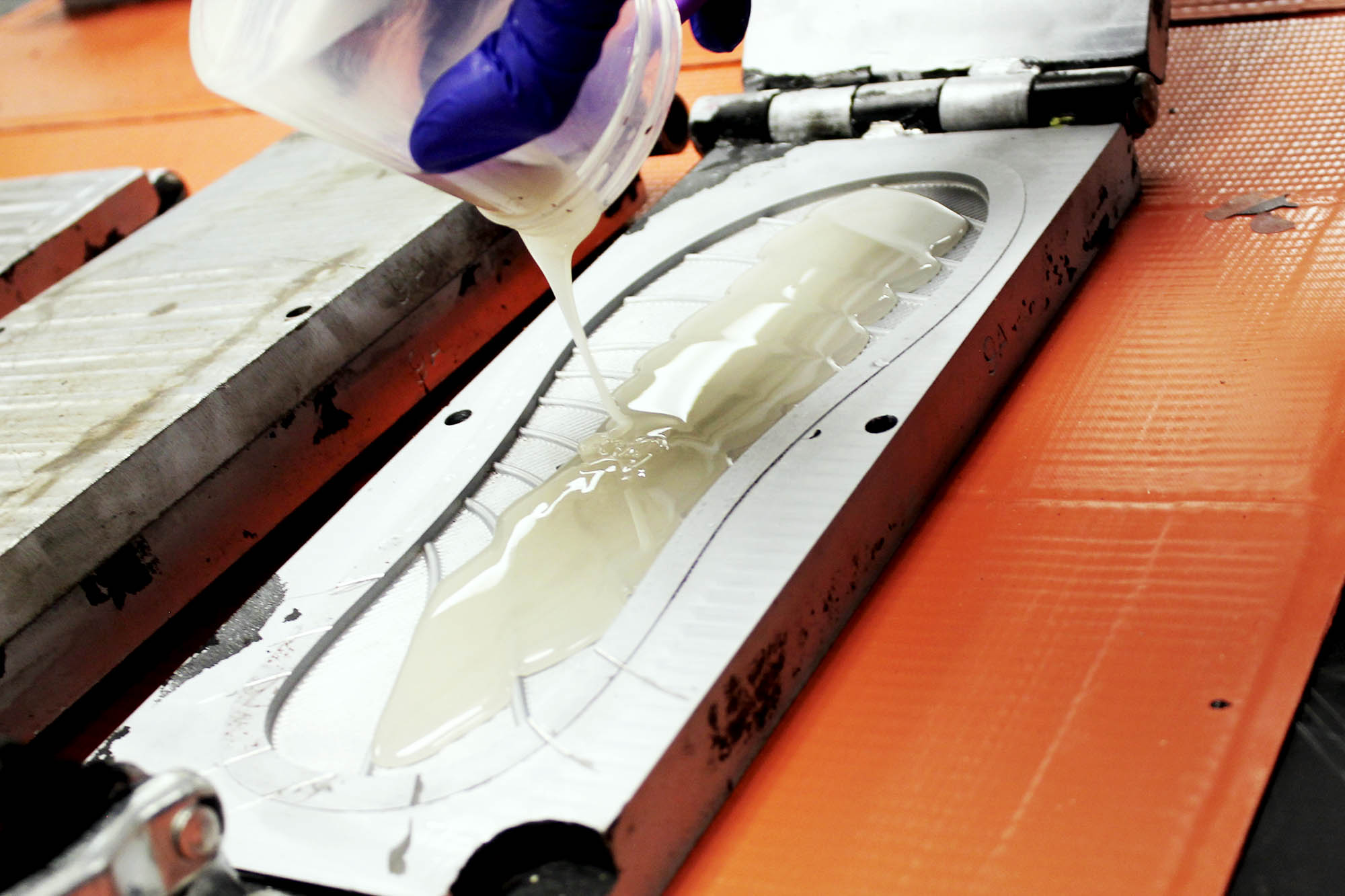 “I always had the compass in my mind of, ‘Companies should be doing good in the world. They shouldn’t be just about making shareholders rich,’” he said. “It was also at a time I was seeing the death of the coral reefs from scuba diving and just the ocean plastic pollution from surfing. The issues were weighing heavy on me.

“You start thinking about, ‘OK, what do I really want to do with my life? What kind of impact do I want to make?’ You start to ID your issues, and I had clearly ID’d climate change and marine plastic pollution as two big passionate issues for me.”

Cooke knew flip flops weren’t being made as sustainably as they could be and set out to find a better way, eventually meeting University of California. San Diego scientist Stephen Mayfield, who had invented a polymer made from algae and other plant-based feed stocks.

About nine months ago, Cooke joined Mayfield at Algenesis.

Mayfield, the company’s CEO, said he hired Cooke for several of his important “hard skills,” but also for a few of his intangibles. 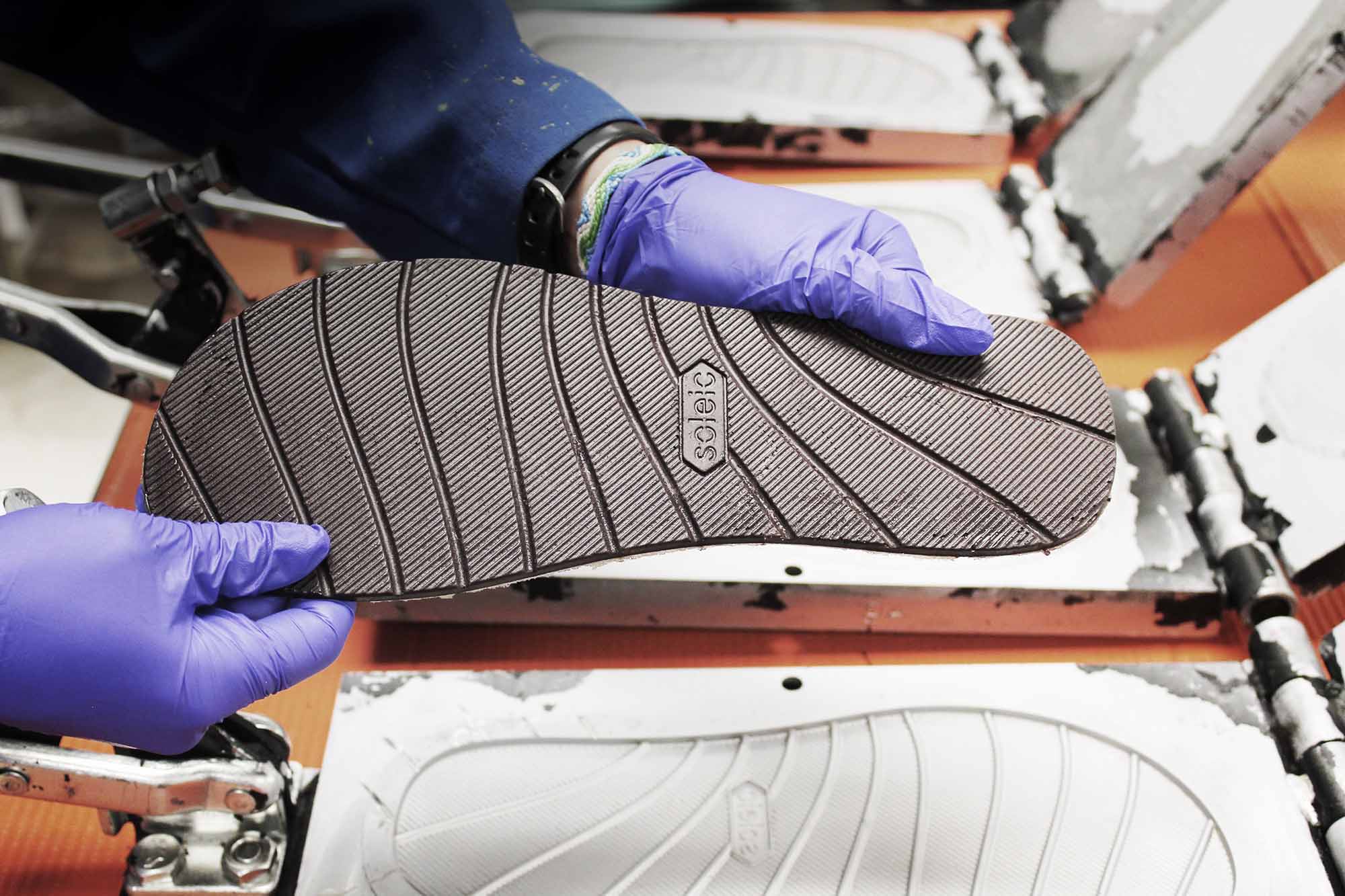 “When we met Tom, he didn’t talk about designs, or manufacturing processes, or even building a brand. He talked about plastic pollution, degradation of our oceans and climate change, and the need for all of us to do everything we can to restore balance on this planet,” he said. “He talked about how he spent a career in an industry that was creating plastic waste at an ever-accelerating rate, and that he wanted to be part of the solution to that problem.”

Mayfield said Cooke is the best hire he’s ever made.

“Most scientists, and maybe most people, think that a great discovery or great invention will change the world, and that is simply not true,” Mayfield said. “Inventions and innovations change the world when they are incorporated into products, and those products are used.

“We had some really innovative sustainable materials, and we needed to put those into products so they could be used. And that is what Tom is so good at, designing products that incorporate new materials – some really cool products.”

Cooke said Algenesis has raised more than $12 million in government grant funding. Presently, the company is fundraising for its commercial launch. The goal is to launch flip flops with a leading sandal brand next year and launch shoes with a newly created direct-to-consumer brand, “BlueView,” sometime within the next year.

Until then, Cooke – who still has family living in the Winchester area – plans to continue his love affair with Solana Beach and Cardiff Reef.

“For me, it’s the epicenter of surf life,” he said.