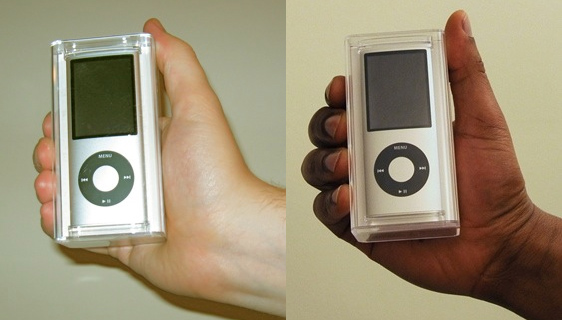 If you walked into a store to buy a brand-new Apple iPod, would you be less likely to buy it, or want to pay less for it, if it were presented by a salesperson who was black rather than white?

Transpose that shopping experience to Craigslist, and that sums up how the average American behaves, according to newly published research co-authored by University of Virginia professor Jennifer Doleac.

A yearlong experiment selling iPods in about 1,200 online classified ads placed in more than 300 locales throughout the United States, ranging from small towns to major cities, tested for such racial bias among buyers by featuring photographs of the iPod held by a man’s hand that was either dark-skinned (“black”), light-skinned (“white”), or light-skinned with a wrist tattoo. In all other respects, the photos were very similar.

The experiment, conducted from March 2009 to March 2010, found that black sellers did worse than white sellers on a variety of metrics: they receive 13 percent fewer responses, 18 percent fewer offers, and offers that are 11 to 12 percent lower. These effects are similar in magnitude to those associated with a white seller’s display of a tattoo, which the authors included to serve as a “suspicious” white control group.

“We were really struck to find as much racial discrimination as we did,” said Doleac, assistant professor of public policy and economics at the Frank Batten School of Leadership and Public Policy, who co-authored the paper with Luke C.D. Stein, assistant professor of finance at Arizona State University’s W.P. Carey School of Business. Stein and Doleac conducted the experiment while both were doctoral students in economics at Stanford University.

Their paper, “The Visible Hand: Race and Online Market Outcomes,” was published online Thursday by The Economic Journal of the Royal Economic Society.

In those thicker markets with at least 20 other iPod ads, black sellers received the same number of offers and equal best offers relative to whites. Conversely, black sellers suffered particularly poor outcomes in thin markets with fewer buyers and sellers, where they received 23 percent fewer offers and best offers that were 12 percent lower – very similar to the results for the tattooed sellers’ ads.

Furthermore, black sellers do worst in markets with high property crime rates and more racially segregated housing, suggesting that at least part of the explanation is “statistical discrimination” – that is, where race is used as a proxy for unobservable negative characteristics, such as more time or potential danger involved in the transaction, or the possibility that the iPod may be stolen – rather than simply “taste-based” discrimination (against race itself), Doleac explained. However, “it is also possible that animus against black sellers is higher in high-crime or high-isolation markets.”

The authors also found evidence that black sellers do better in markets with larger black populations, “suggesting that the disparities may be driven, in part, by buyers’ preference for own-race sellers,” they write in the conclusion.

The experiment ads all featured a silver, 8-gigabyte “current model” iPod nano digital media player, described as new in an unopened box, and for sale because the seller did not need it.

Doleac and Stein never met with the buyers in person. Instead, when it came time to set up a meeting, the researchers said they were out of town and offered to ship the iPod to a buyer’s home in exchange for payment via PayPal, an electronic payment system widely used for online person-to-person transactions. This proposal is generally suspicious, as classified ad websites like Craigslist strongly advise users to deal locally only with in-person transactions, and avoid deals involving shipping or mailing or online payments. In response to this suspicious offer, those corresponding with black sellers reacted much more negatively, implying less underlying trust.

The average ad received 2.7 responses (probable scam responses were ignored), and the text of all subsequent email interactions was scripted to be consistent.

“The environment in which we conducted our experiment has many advantages,” Doleac explained. “Buyers have no reason to make offers that they do not anticipate ending in a transaction. Trust also plays a key role in the interactions – the buyer expects to meet a seller in order to complete the transaction and faces the real possibility of deception or theft. These are characteristics of many ‘real-world’ market transactions that are not present in the markets considered by many other studies.

“We believe our study isolates the effect of race on market outcomes more convincingly than previous studies and provides some insight into why buyers are discriminating,” Doleac said.

Meet the New Cavalier on Horseback: She’s Eager To ‘Carry On a Legacy’ END_OF_DOCUMENT_TOKEN_TO_BE_REPLACED

Monkeypox Is Spreading, But University’s Risk Believed To Be Low END_OF_DOCUMENT_TOKEN_TO_BE_REPLACED

Virginia Football – For All Virginia END_OF_DOCUMENT_TOKEN_TO_BE_REPLACED