Spring Hedgehog Review Focuses on Work in the Precarious Economy 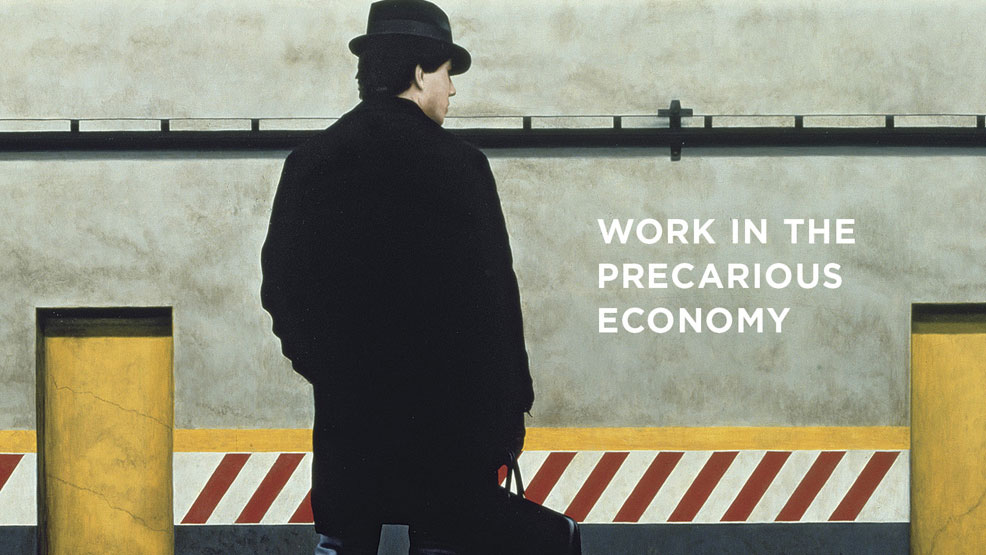 Is it just Uber drivers and other gig workers, or all we all temps now? Are the stable career and the 9-to-5 job on the verge of extinction? Are we now all free to make our own futures? Or fated to perpetual insecurity?

Addressing those increasingly common questions, The Hedgehog Review, an interdisciplinary journal published by the University of Virginia’s Institute for Advanced Studies in Culture, devotes its spring issue to “Work in the Precarious Economy.”

By some scholarly estimates, roughly one-fifth of today’s global workforce belongs to the “precariat,” a vast, growing and class-transcending assortment of part-time, short-term, contract, migrant, or undocumented workers, managers and professionals who often toil alone at home, take on various gigs, or start new businesses with little or no hope of longevity, steady incomes or benefits. If, as Hedgehog Review editor Jay Tolson points out, work is so central to Americans’ identity and happiness, how are we dealing with the cultural as well as economic consequences of “precarity”?

Although it’s tempting to blame computerization and the new technologies for the downsizing and disruptions that characterize much of the modern economy, historian and Hedgehog contributor Louis Hyman shows how the embrace of temp work and consultant-led transformations of the corporation undermined the employer-employee social contract: “The origins of precariousness in the rise of temp agencies and the fall of the postwar conglomerate run much deeper than the advent of digital platforms,” Hyman writes.

In their respective essays, “Liberated as Hell” and “The Disruptables,” historian Brent Cebul and sociologist Benjamin H. Snyder explain how space and time have become flexible and unpredictable in a working world without dedicated workplaces or fixed working hours. Both authors explore Americans’ ambiguous attitudes toward the “bounded career” of the recent past (which provided security at the cost of conformity and submission to routine) and the improvised career of the present (which allows for autonomy, but lacks most institutional supports). While many of today’s disruptables claim to thrive in the gig economy, just as many are daunted by its challenges to happiness, health and general well-being.

The meaning of work also matters to Americans. Religious studies scholar Philip Lorish considers the ways in which the work culture of Silicon Valley tries to foster a new technology-centered conception of mission and calling, one that contrasts in telling ways with older, more religiously based conceptions of vocation and the good life.

Are craft breweries and cottage industries a possible way forward, or merely the fragile offshoots of the hipster lifestyle? In his look at the artisan economy in Portland, Oregon, Charles Heying, a professor of urban studies, moves “beyond the myth of romantic localism” to reveal a particularly imaginative yet practical alternative for the future of work – one that blends localism with the exigencies and opportunities of a globalizing economy.

Will your lawyer one day be replaced by an app? Noted Harvard University psychologist Howard Gardner asks whether there will be a future for the professions in the precarious era. The winner-take-all mentality that features so prominently in the new economy has contributed, he argues, to the erosion of the efficacy, self-confidence and ethical authority of professionals, with growing costs to society.

In her close ethnography of the “self-assembled” career, anthropologist Carrie M. Lane tells how professional organizers and odd-job workers, mostly women, find their self-employment both sustaining and rewarding despite formidable challenges. One key to their success: finding, creating and joining new institutions of mutual support and solidarity.

Author and UCLA professor Mike Rose rounds out the thematic essays with a passionate appeal for real vocational education – education that “gives workers back their heads” and enables them to meet the realities of constant change in the new work environment.

What happens when writers run for office? In the first of two non-thematic essays, “Books and Ballots,” literary scholar and biographer Steven G. Kellman offers a fast-paced account of the ups and downs faced by writers who take their visions beyond the bounds of the printed page into the world of electoral politics.

And finally, in “Housework,” philosopher Mary Townsend offers a thoughtful appraisal of an activity that is too often dismissed as mere drudgery. Defending housework as thought, she calls for respect for unskilled labor inside and outside the home.

The Hedgehog Review is published three times a year. The summer issue (out July 1) will look at the problems of meritocracy. To subscribe, click here.

What’s Next for UVA’s Class of 2022? END_OF_DOCUMENT_TOKEN_TO_BE_REPLACED