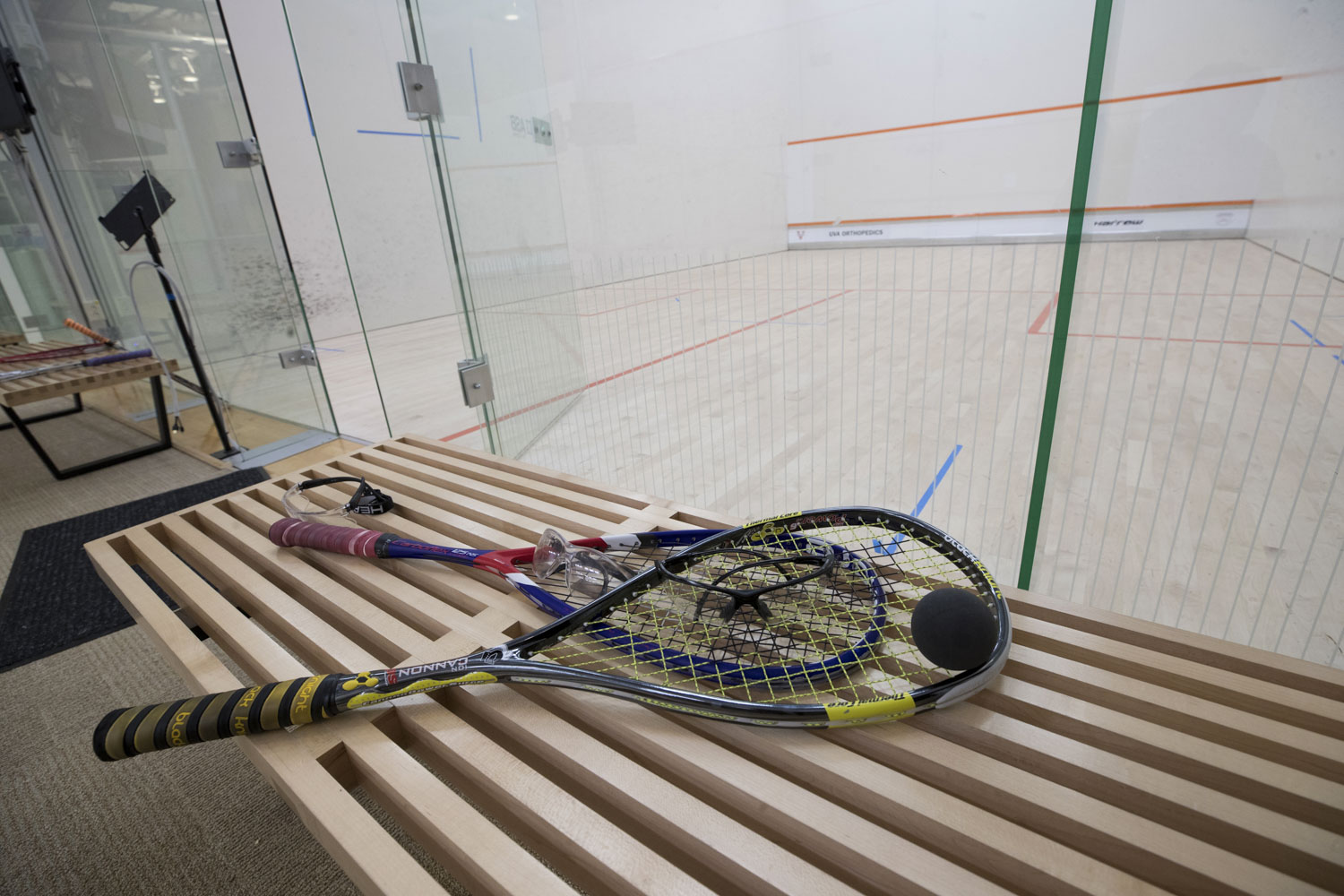 After a just-completed expansion, the McArthur Squash Center, which opened in 2013, now has 14 singles courts and two doubles courts. (Photos by Dan Addison, University Communications)

One of the most prestigious squash events in the world – one that has never come to the United States – is coming to the University of Virginia.

Starting Sunday, UVA will be at the center of the squash universe when the Boar’s Head Sports Club’s McArthur Squash Center hosts the World Masters Squash Championships.

This will be the first time that the Masters, which takes place every two years, will be played in the U.S. The last three events have taken place in South Africa, Hong Kong and England.

“It could be another 20 years before this tournament is held in the United States again,” Boar’s Head Director of Squash and UVA coach Mark Allen said.

More than 800 participants – plus their families – will flock to Charlottesville for the event, which runs through Aug. 4. In all, between 1,200 and 1,500 visitors from around the globe are expected. Most will arrive a day or two before the start of the tournament and depart a day or two afterward.

The Charlottesville Regional Chamber of Commerce is estimating an economic impact between $750,000 and $1 million. 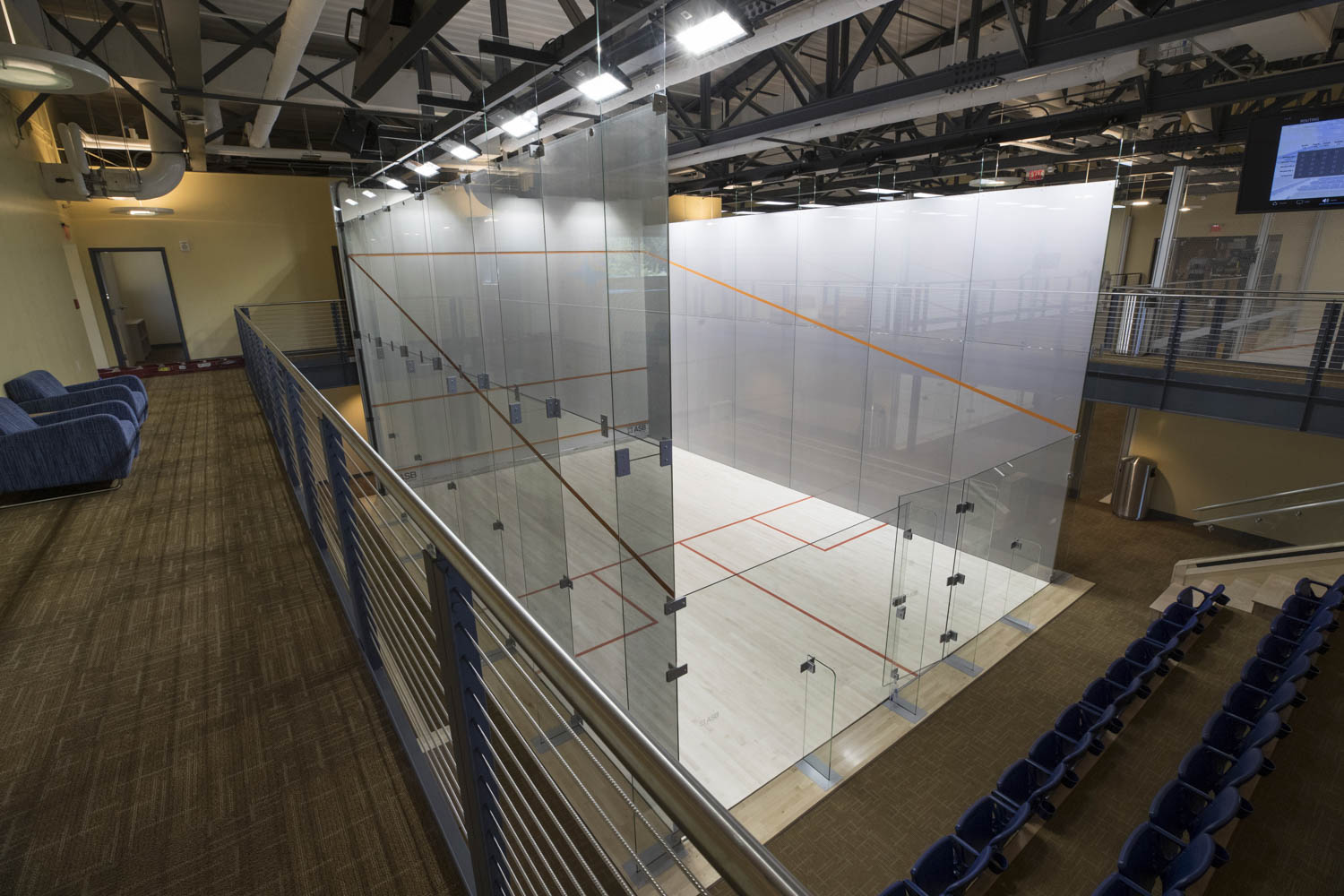 There are only a handful of glass-encased “show” courts in the world. The Boar’s Head Sports Club now has two of them.

Construction of five new singles courts was just completed at the McArthur center, giving the venue a total of 14 singles and two doubles courts.

“We had arguably the best facility in the country,” Allen said, “but to host all the major events – both nationally and internationally – there needed to be a minimum of 14 courts. This now puts us in a position where we can host any squash event that is out there.”

The tournament is free and open to the public. Early-round matches also will be played at nearby St. Anne’s-Belfield School.

In its first year as a varsity sport this past winter, the UVA men’s team went 15-8 and finished as the 14th-ranked team in the country; the women went 14-9 and finished 13th.

Since its opening in 2013, the McArthur center has successfully hosted the U.S. Masters and National Championships. That proved to be a feather in the cap when bidding for the World Masters came around three years ago.

Organized by the World Squash Federation, the competition is broken into 10 age groups, ranging from over-35 to over-80.

While no junior players compete in the Masters, Allen still expects the event to pay dividends for UVA down the road.

“In a lot of cases, these players have kids who in five, 10 years are going to be looking at colleges,” Allen said. “There will be no shortage of parents of future potential recruits coming through here and I think that’s a positive for the long-term growth of the program.”

The skill level of participants runs the gamut from former pro players to weekend warriors.

“This tournament is about giving back to the sport and to those who are passionate about playing it,” Boar’s Head Sports Club manager James Neiderer said. “We feel fortunate to be able to support UVA in hosting these types of events – in both squash and tennis -- that bring so much energy and excitement to Charlottesville.”

Among the big names will be Australian Sarah Fitz-Gerald, who has won five World Open titles and will be competing in the over-50 group; Natalie Grainger, the two-time defending over-35 champion; and former top-20 player Laurens-Jan Anjema of the Netherlands in the over-35s.

Allen said some of the best matches he’s ever seen have been between players in the older age groups.

“I was watching the over-70 in Johannesburg in 2016 and I’ve rarely been as inspired,” he said. “Watching two 72-year-old men duke it out – the level of athleticism and skill was just amazing.

“If you ever wanted an example of how a lifelong sport can keep you in shape and healthy, this was it. I was truly blown away by how high the level of squash still was.”

With the tournament taking place at a time in the summer when, traditionally, there isn’t a whole lot happening on Grounds – summer camps have concluded and UVA athletics remain on hiatus – Allen and his team are excited to have center stage.

“When McArthur Squash Center was built, it was built with these kinds of world-class events in mind,” Allen said. “This is typically held in major cities around the world, so it’s fantastic that we were selected to be able to host this event.”

When Less Is More: How Harnessing the Power of Subtraction Can Add to Life END_OF_DOCUMENT_TOKEN_TO_BE_REPLACED