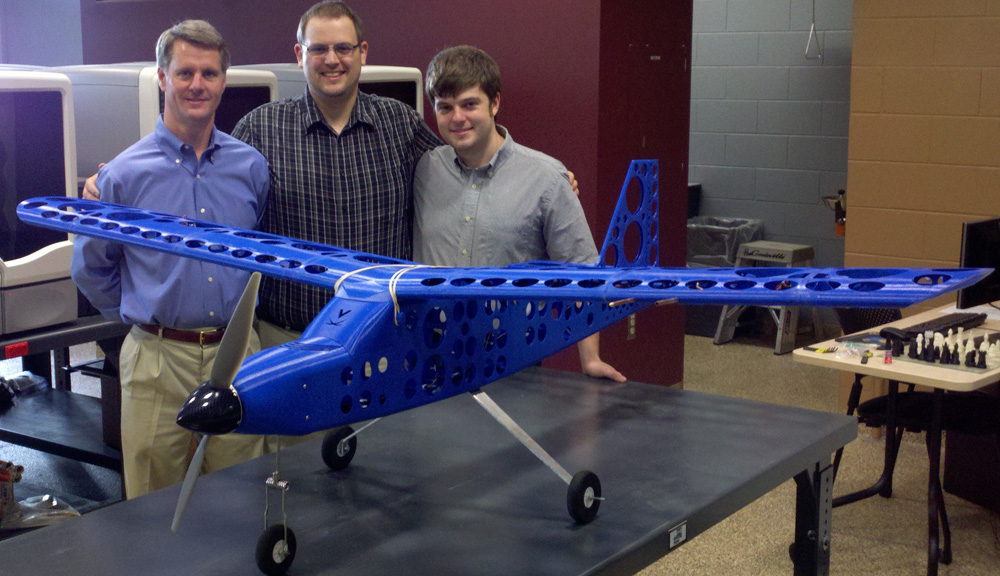 When University of Virginia engineering students posted a YouTube video last spring of a plastic turbofan engine they had designed and built using 3-D printing technology, they didn’t expect it to lead to anything except some page views.

But executives at The MITRE Corporation, a McLean-based federally funded research and development center with an office in Charlottesville, saw the video and sent an announcement to the School of Engineering and Applied Science that they were looking for two summer interns to work on a new project involving 3-D printing. They just didn’t say what the project was.

Only one student responded to the job announcement: Steven Easter, then a third-year mechanical engineering major.

“I was curious about what they had to offer, but I didn’t call them until the day of the application deadline,” Easter said.

He got a last-minute interview and brought with him his brother and lab partner, Jonathan Turman, also a third-year mechanical engineering major.

They got the job: to build over the summer an unmanned aerial vehicle, using 3-D printing technology. In other words, a plastic plane, to be designed, fabricated, built and test-flown between May and August. A real-world engineering challenge, and part of a Department of the Army project to study the feasibility of using such planes.

Three-dimensional printing is, as the name implies, the production or “printing” of actual objects, such as parts for a small airplane, by using a machine that traces out layers of melted plastic in specific shapes until it builds up a piece exactly according to the size and dimensions specified in a computer-aided drawing produced by an engineer.

In this case, the engineers were Easter and Turman, working with insight from their adviser, mechanical and aerospace engineering professor David Sheffler, a U.Va. Engineering School alumnus and 20-year veteran of the aerospace industry.

It was a daunting project – producing a plane with a 6.5-foot wingspan, made from assembled “printed” parts. The students sometimes put in 80-hour workweeks, with many long nights in the lab.

“It was sort of a seat-of-the-pants thing at first – wham, bang,” Easter said. “But we kept banging away and became more confident as we kept designing and printing out new parts.”

Sheffler said he had confidence in them “the entire way.”

The way eventually led to assembly of the plane and four test flights in August and early September at Milton Airfield near Keswick. It achieved a cruising speed of 45 mph and is only the third 3-D printed plane known to have been built and flown.

During the first test, the plane’s nosepiece was damaged while the plane taxied around the field.

“We dogged it,” Easter said. “But we printed a new nose.”

That ability to make and modify new parts is the beauty of 3-D printing, said Sheffler, who works with students in the Engineering School’s Rapid Prototyping Lab. The lab includes seven 3-D printers used as real-world teaching tools.

“Rapid prototyping means rapid in small quantities,” Sheffler said. “It’s fluid, in that it allows students to evolve their parts and make changes as they go – design a piece, print it, make needed modifications to the design, and print a new piece. They can do this until they have exactly what they want.”

The technology also allows students to take on complex design projects that previously were impractical.

“To make a plastic turbofan engine to scale five years ago would have taken two years, at a cost of about $250,000,” Sheffler said. “But with 3-D printing we designed and built it in four months for about $2,000. This opens up an arena of teaching that was not available before. It allows us to train engineers for the real challenges they will face in industry.”

MITRE Corp. representatives and Army officials observed the fourth flight of Easter and Turman’s plane. They were impressed and asked the students to stay on through this academic year as part-time interns. Their task now is to build an improved plane – lighter, stronger, faster and more easily assembled. The project also is their fourth-year thesis.

“This has been a great opportunity for us,” Easter said, “to showcase engineering at U.Va. and the capabilities of the Rapid Prototyping Lab.”