Student Spotlight: From Ancient Greek to ASL, Morris Has a Way With Words 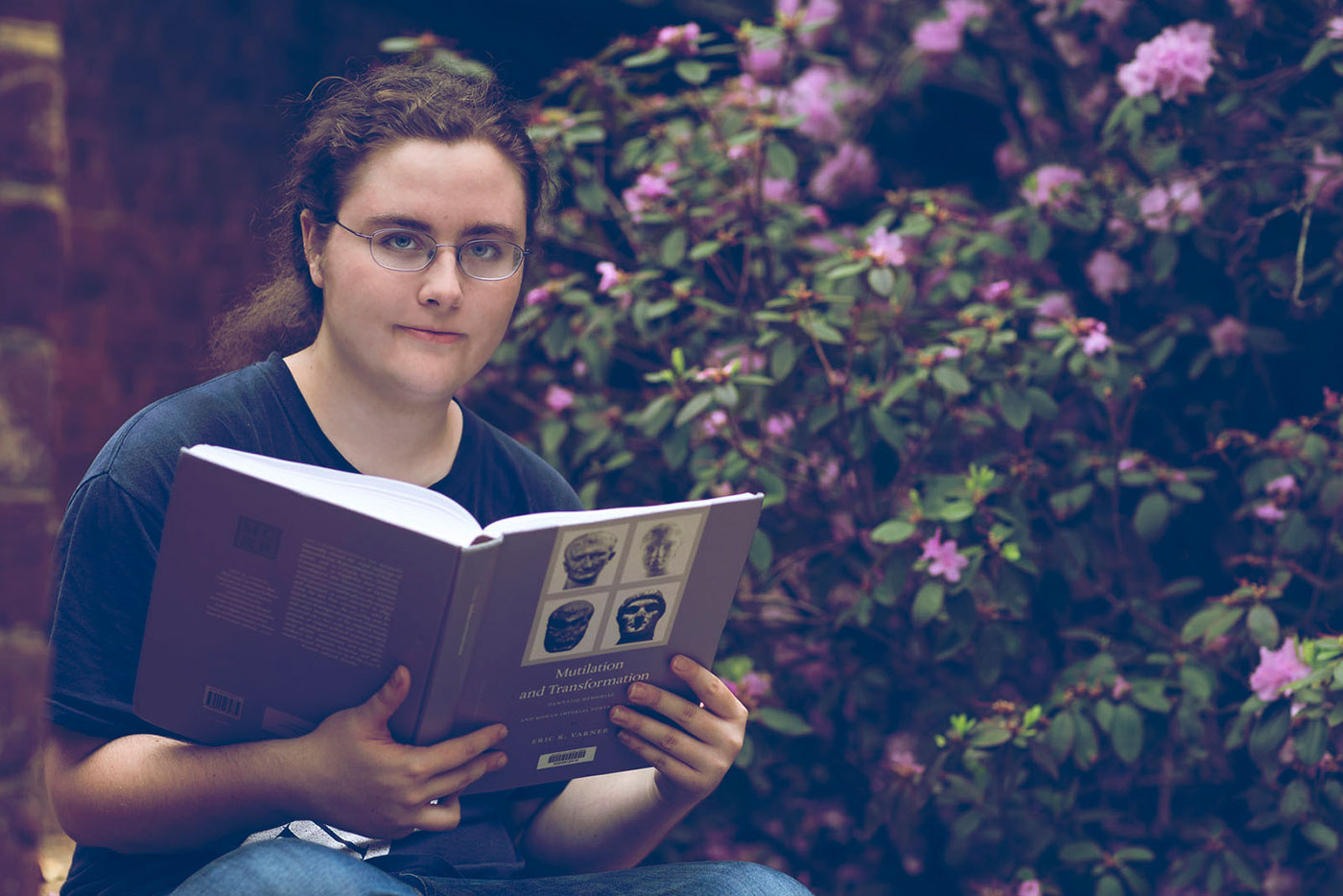 She may have only been 9 years old, but when Brittany Morris found a copy of Alison Weir’s “The Six Wives of Henry VIII,” she became captivated by the lurid tales and intrigues of the court of Henry VIII. She has pursued European history ever since.

Before embarking on her undergraduate career, Morris independently studied classical antiquity and the political, social and cultural history of the European monarchies during the medieval era and the early modern period, in addition to classical and medieval literature. Having taken five years of Latin before college, she still continues to study Latin in addition to ancient Greek.

“I suppose I’ve always been fascinated by, among other things, the interpersonal dramas of the medieval era, as well as intrigued by the evolution of the institutions of the monarchy and the church in addition to the development of the feudal system,” said Morris, who grew up in the Washington, D.C. area.

Morris demonstrates a facility with languages – in addition to English, Latin and ancient Greek, she communicates through American Sign Language and uses an ASL interpreter to communicate her ideas in class discussions and presentations.

Born to deaf parents and deaf since birth, she considers American Sign Language to be her first language. Having been a full-time mainstreamed student in public schools since kindergarten, she said her parents were more concerned about ensuring that she receive a better education than they did in schools for the deaf during the 1960s and ’70s than in “normalizing” her. They supported her abilities and passions, such as studying ancient languages and history.

Assistant professor Ahmed al-Rahim, who directs the medieval studies program, leads the upper-level course Morris took last semester. A specialist in medieval Islamic civilization, he said she stands out as one of the best students he’s ever had, no matter what age or stage of learning.

“Ms. Morris actively and with great insight participated, through her sign-language interpreters, in the ‘Colloquium in Medieval Studies,’ a seminar showcasing the scope and scholarly depth of the faculty members of the Program in Medieval Studies,” al-Rahim said. “Her grasp of French literature and language was, for a first-year student, truly impressive – culminating in a brilliant paper.”

“One great thing about medieval studies here at UVA is that it’s interdisciplinary and quite flexible,” said Morris, who added that she loves her courses.

Important in working with interpreters who attend classes with her, Morris said, is making sure they understand how she communicates, so they can represent her ideas to her professors and peers accurately and effectively – “and I sign fast,” she said, chuckling.

She works with several different sign-language interpreters, prepping them on the subjects she’s taking, such as giving them her English translations of Latin and Greek texts for in-class translations as well as transcripts of her oral presentations, and meeting with them between classes to review the material.

“The interpreters are just mediums through which my perceptions, sentiments and the like may be expressed in such a way that is reflective of my sensibility,” she said. “They merely facilitate communication – communication assuredly doesn’t begin with them. However, I have to develop strong working relationships with them by interacting with them often, both inside and outside of class, so they may get accustomed to my own particular mode of self-expression.”

Morris said she’d like to see more hearing people approach her and other deaf people not as people with a disability, but as individuals first and foremost. She asserts that “disability” is too general of a term, sounding like a description of a homogeneous group, which it is not. “The term ‘disability’ is very much a mental and social construct,” Morris said.

“Since the overwhelming majority of deaf children have hearing parents, I feel extremely privileged to have deaf parents, because they didn’t oppress me by pathologizing my deafness, by treating it as something to be rectified,” Morris said. “After all, that deafness automatically makes someone inherently inferior is an extremely ancient misconception. Through them, I was born into the deaf community, and came to feel affirmed in my identity as a culturally deaf person.”

Diversity is important to recognize in the deaf community because not everyone is the same. “A common misconception is that deaf people are homogeneous and should be treated in a similar manner, and I think this is due to the tendency of people to automatically relegate people who are perceived to be different to the realm of the ‘other.’ In truth, the deaf community is extremely heterogeneous, with different backgrounds, interests, experiences, communication modalities, goals,” Morris said. “Each deaf individual has his own idea of what exactly the deaf community, deaf culture and deafhood constitutes. The deaf experience is far from being a monolithic entity and continues to defy all arbitrary definition.”

Neither is the deaf community separate from the hearing community. “Using such terms as ‘hearing world’ and ‘deaf world’ would be merely creating a false dichotomy,” Morris said. “It implicitly and erroneously assumes that deaf people are necessarily segregated from hearing people by virtue of their deafness. In reality, we all inhabit the same world, ideally as friends and allies.”

What’s Next for UVA’s Class of 2022? END_OF_DOCUMENT_TOKEN_TO_BE_REPLACED