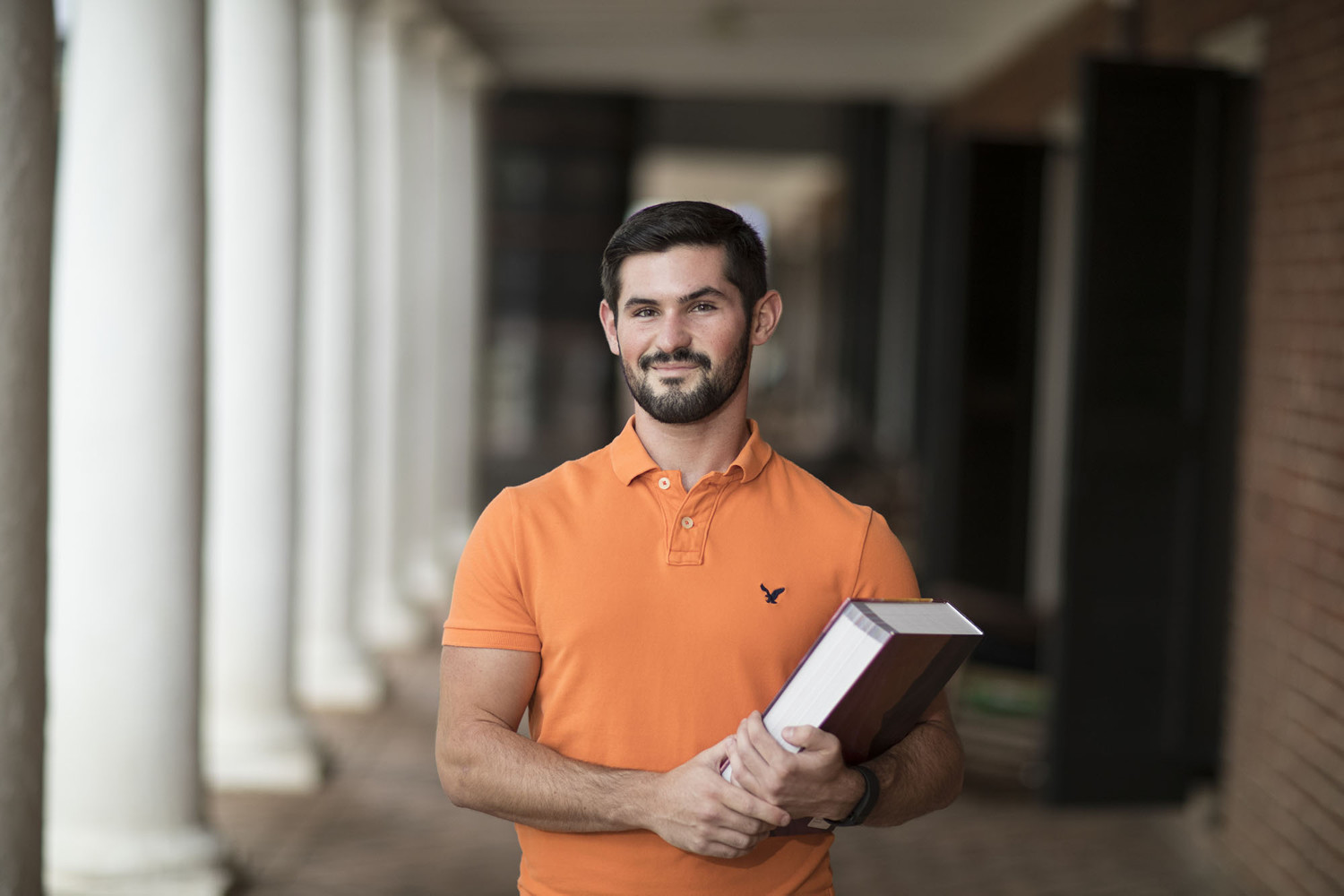 After spending long hours in the classroom and on the hospital floor completing clinical rotations, Josh Moore, a fourth-year nursing student at the University of Virginia, looks to physical fitness for a release.

So on Sunday and Tuesday evenings in UVA’s Aquatic & Fitness Center, Moore, a certified INSANITY instructor, leads his class through a series of movements that target all muscle groups using only body-weight resistance. In each 60-minute class, participants can expect to work on plyometrics (jump training) and endurance, strength and balance, agility and coordination, and core.

“Working out is one of the best ways to deal with stressful days,” Moore said.

Staying in shape isn’t just for personal benefit, though, he said. He also believes that his role in the health care profession is influential, and that he should be a walking example of healthy choices.

“Nurses, in my opinion, should be the epitome of health,” he said. “If I’m preaching about eating right and exercising to my patients, then I should be upholding that image.”

But Moore didn’t always follow the lifestyle he now embodies. Challenging teenage years resulted in stress eating and weight gain for Moore, and he avoided physical activity out of fear of ridicule.

Then, the summer before his senior year of high school, a TV commercial advertising the INSANITY program caught Moore’s eye.

“I decided the way I was living wasn’t what I wanted anymore,” Moore said. “I tried the program and realized it was something I really enjoyed.”

The fitness program quickly became a habit for Moore, and during his first year at UVA he became a certified INSANITY instructor with the goal of bringing the benefits of fitness to other people’s lives.

It wasn’t until a nursing school trip to Nicaragua over spring break last spring, however, that Moore truly began to realize the positive impact he was having on his peers. During a community health clinic visit, Moore encouraged his classmates to join him in a workout to relieve some stress.

“It was 100 degrees and I had hooked up my phone to one of the only stereo systems in the city,” Moore said. “But we did the workout, and that was when my classmates really encouraged me to teach the class at UVA.”

Now, Moore’s classes at the Aquatics & Fitness Center regularly bring in waves of participants who are eager to see just why Moore is so passionate about the exercise program.

Moore encourages his class participants to embrace that difficulty, though, because the greatest risks often result in the greatest rewards. Take Moore’s personal path to UVA, for example.

Unsure of whether or not he was going to attend college right out of high school in Cedar Bluff, Virginia, Moore applied to UVA on a whim. To his surprise, he was accepted. Now he occupies a room in UVA’s iconic Academical Village, an honor accorded only to students who make a major contribution to the University community.

“To move from a small town in Southwest Virginia to living on the Lawn at the University of Virginia is just surreal,” he said. “I still wake up some mornings and look out my door and think ‘How did this happen?’”

Though Moore says UVA has become a special place that has contributed to his personal and professional development, upon graduation next spring, he plans to return home and find a place within his community as a pediatric nurse.

“The kids are fantastic and they are so resilient,” Moore said. “To get the opportunity to be a bright spot in their day makes it all worth it.”

When Less Is More: How Harnessing the Power of Subtraction Can Add to Life END_OF_DOCUMENT_TOKEN_TO_BE_REPLACED