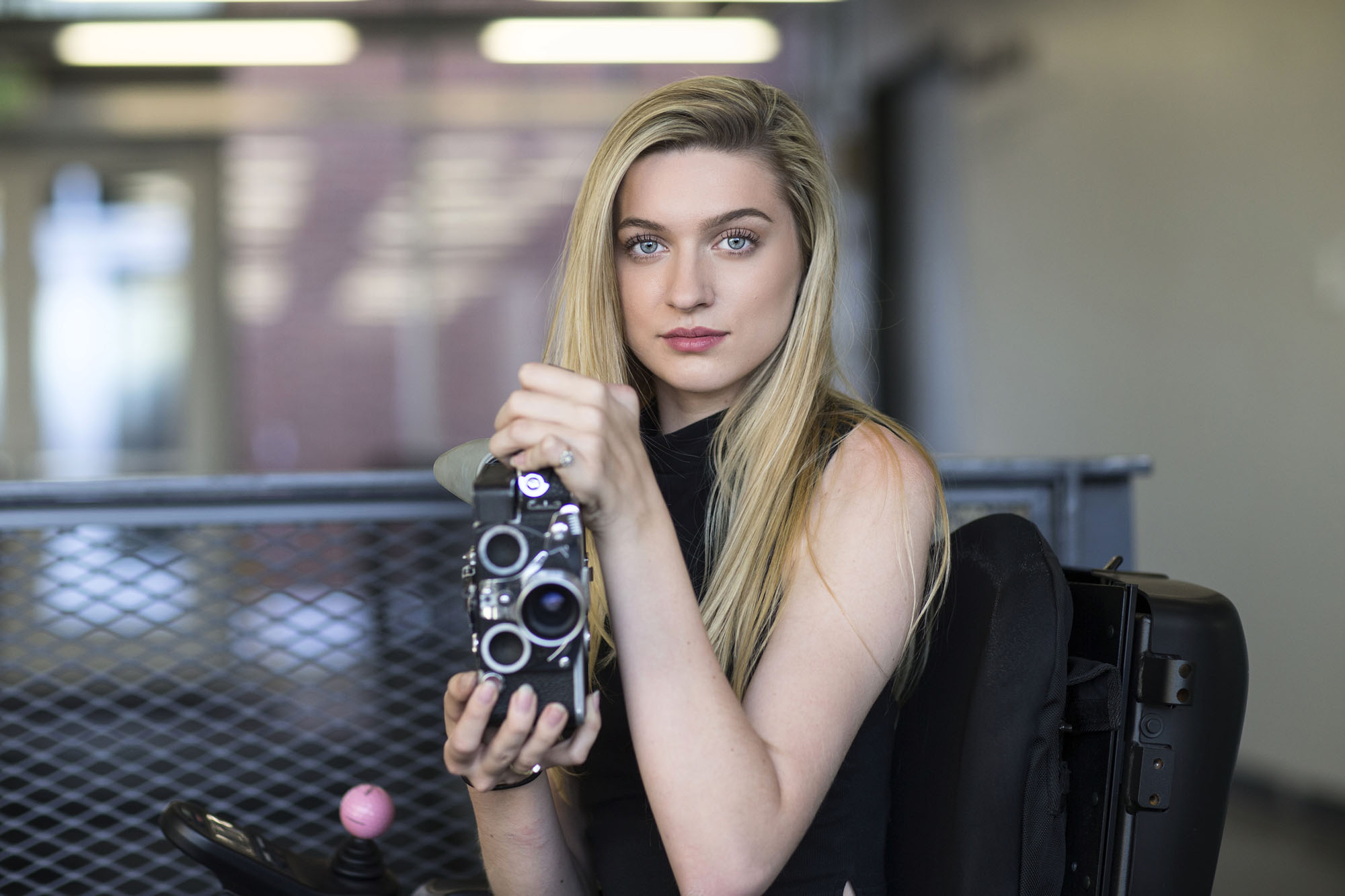 A documentary filmmaker? Or graphic designer? Or photographer? Michelle Miles is pursuing her budding interests in several fields like any other enthusiastic first-year student at the University of Virginia.

While deciding where she wanted to go to college, however, Miles wondered if UVA, as well as other older colleges and universities on the East Coast especially, wouldn’t be a good fit. She thought she’d have to choose a more modern setting, she said.

Miles, who’s lived in Charlottesville since she was 6 years old, began getting around in a wheelchair a half-dozen years ago in seventh grade. She knew the local area, full of old streets and buildings, wasn’t totally accessible, but had improved. She decided to give UVA a look anyway.

Taking the tour of the Grounds, Miles was pleasantly surprised to find that UVA’s newest dorms were the most accessible of any of the schools she was considering. Now she lives comfortably in Shannon House, one of the latest replacements to the Alderman Road dorms. Next year, she’ll join the Brown College community.

“I was surprised at how accessible everything was,” she said, adding that the Robertson Digital Media Lab is one of her favorite places so far.

Interested in film and multimedia, Miles is already taking her second course in cinematography with Professor of Art and filmmaker Kevin Jerome Everson.

“Michelle is a joy to have in the class. She came highly recommended from some friends in Los Angeles at Film Independent,” Everson wrote in a recent email from California, where he was preparing to judge the organization’s Film Independent Spirit Awards.

He also praised her work. “Michelle is a good filmmaker. Her last two projects from the fall term were amazing. ... She has an amazing eye. Michelle will be a talent you can’t ignore.”

Miles met a California connection of Everson’s at the Los Angeles Film Festival last June, which she and fellow high-schooler Grace Hoffman attended with their short film, “Beatrix.” They won best short documentary in the festival’s Future Filmmakers competition for their depiction of artist and style icon Beatrix Ost, who lives outside Charlottesville and in New York.

Judges described the film as a “beautifully shot portrait [that] explores individuality and the joy in finding oneself.”

That could serve as a way of describing Miles as well.

She’s finding herself in extracurricular activities focused on multimedia and the arts. Working for V Magazine, a student-run arts, culture and fashion magazine, she’s taking photographs and writing an editorial.

In true Wahoo fashion, she joined a new student effort – creating a multimedia publication called the Fuse, for which she serves as media director and co-chair of design.

“It hasn’t launched yet, but we are recruiting new members to build our teams, refining our website and developing content,” she said.

Pursuing her film interests, she’s a member of the Filmmakers’ Society, a student-run group that presented the Virginia Student Film Festival last month. The event, started at UVA in 1997, accepts short films submitted by undergraduate students enrolled in any university in the U.S.

“The committee watched all of the films that were submitted before sending them to the judges and made decisions about which would be included in the festival,” Miles said.

Life on Grounds Through Her Lens

Since being on her own at college, Miles said she’s become more aware of accessibility and wants to be part of progress where needed. “If I don’t bring it up, I don’t know who will,” she said.

When she did encounter some difficulties, she wrote a letter to Vice President and Chief Student Affairs Officer Patricia M. Lampkin. Soon after, Wynne Stuart, associate provost for academic support and classroom management, met with Miles and asked if she’d join the University’s Committee on Persons with Disabilities, which works to remove barriers to access.

“We always try to have two students on the committee, and we do at the moment,” said Stuart, who chairs the committee. “Early in the first semester, Michelle wrote a really good letter about circulation challenges that she was having around Grounds. … It is always helpful when we find a student who is interested and can serve more than one year.”

There’s more to it than installing a few ramps, Miles said. “It’s fundamental – our social treatment of disability.” Sometimes her non-disabled friends get more upset than she does, she said.

“Everyone has their own challenges. A disability is just one piece,” she said.

Elizabeth Barnes, a UVA associate professor of philosophy and author of the forthcoming book “The Minority Body: A Theory of Disability,” agrees. In a new blog, Disability@UVA, started by the Disability Advocacy and Action Committee, Barnes tackles the premise that having a disability is a bad thing for a person.

“We tell our students that different people are good at different things, and that a big part of taking ownership of their time at UVA is figuring out how they learn best, what they like to learn and what they care about when it comes to their education,” Barnes wrote. “People have different abilities, skills and interests – and that’s a good thing. Part of what we want to foster in an academic community is an appreciation for the ways in which we’re different and for the unique value these differences can bring. Disability is a part of that spectrum of diversity.”

Under UVA’s Office for Diversity and Equity, the Disability Advocacy and Action Committee works on theoretical and programmatic issues, like raising awareness by holding a biennial disabilities studies symposium, the latest of which took place last month. The committee also has begun an initiative for an academic program in disability studies.

The University’s ongoing renovations of the Academical Village and other buildings are making the latest upgrades in technology, access and safety. These improvements help pave the way for academic success and an enriching experience for students, including Miles.

She’s finding her way at UVA. She just happens to be getting there in a wheelchair.