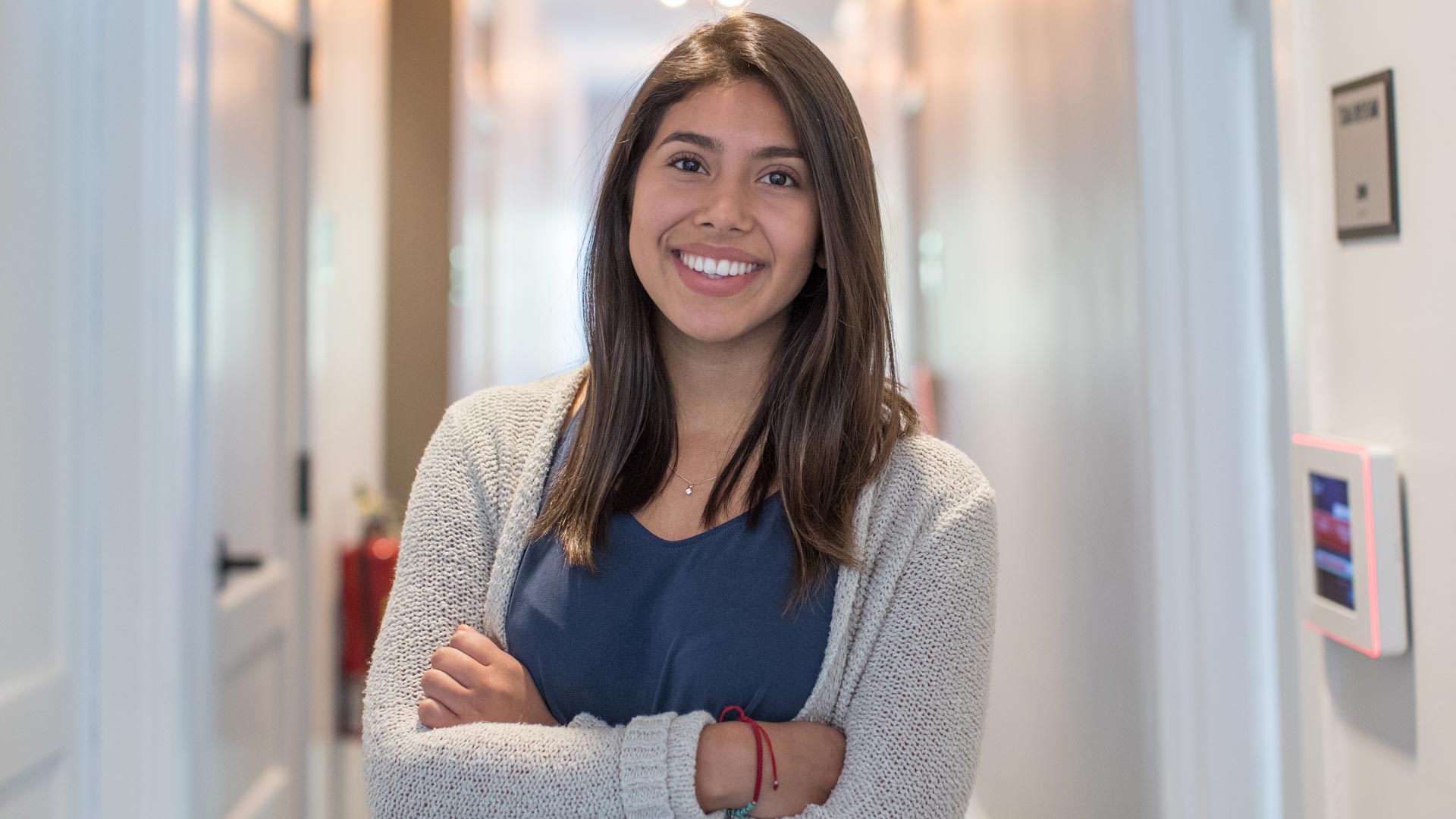 Second-year student Nicole Leal hopes to explore immigration law one day, but for now she is focused on making a difference on Grounds. (Photo and video by University Communications)

University of Virginia second-year student Nicole Leal has found her own voice by helping others raise theirs.

The Lynchburg native, who described herself as a very shy high-schooler, joined a peer-mentoring program for Hispanic and Latino students when she arrived on Grounds and got involved in numerous outreach programs for Latino students and communities, first to make connections herself and then to help other students feel connected.

“Coming here, I was a bit scared, but as time went on, I met people through the Latinx Student Alliance, the mentoring program and other organizations,” said Leal, who hopes to pursue a double major in sociology and American studies, concentrating in race and ethnicity. “I did not think I would be involved in so many organizations that help others have a voice, but I love it.”

“Nicole is amazing,” said Carmen Lamas, an assistant professor in the English department and American studies program who taught Leal as a first-year student and continues to mentor her. “I see her as a leader by example, because she has this quiet, dedicated persistence and thoughtfulness about all that is happening in our country.”

In addition to her own studies and working a part-time job at Corner restaurant Roots Natural Kitchen, Leal coordinates community events for the Latinx Student Alliance Outreach Committee, spends several hours each week mentoring students at Walton Middle School through the Rise Together program and has served as an English as a Second Language teaching assistant at Charlottesville High School.

“Many of them come from low-income families and would be the first in their families to go to college,” said Leal, herself the first in her family to go to college. “Our goal is to help them become better leaders, grow more confident in themselves and hopefully take an interest in higher education.”

She is also an intern in the outreach program of the Office of Undergraduate Admission, where she helps organize information and events for prospective students and their families. Last fall, Leal translated letters and informational brochures for an event for prospective Latino students so that Spanish-speaking families could learn more about UVA, scholarship opportunities and different organizations on Grounds.

“Many of the students’ parents and families are primarily Spanish speakers. That’s how it was with my family,” said Leal, recalling having to summarize each presentation for her parents. “My parents wouldn’t understand everything written on the pamphlets or said at the presentations, so I would interpret for them. Once here, I made it a priority to push for bilingual information at these events.” She said Associate Dean Valerie Gregory, the director for Admissions Outreach, wants to continue the effort after hearing very positive feedback from families.

Leal’s parents immigrated to the United States from Mexico before she was born. She is the oldest of their three children; her two younger brothers are currently in high school and middle school in Lynchburg.

“My parents met here and I grew up speaking Spanish at home, though now my English is a bit better than my Spanish,” she said.

Though Leal was born in the United States and thus is a U.S. citizen, some of her friends are protected by the Deferred Action for Childhood Arrivals policy, which allows undocumented immigrants brought into the country as minors to remain and become eligible for work permits, Social Security and temporary protection from deportation. Continuation of the policy is currently being debated at the White House and in Congress, creating tremendous uncertainty for thousands of DACA recipients, commonly referred to as “Dreamers” after a similar, unpassed proposal called the DREAM Act.

Eager to do something for friends affected by that debate, Leal decided to serve on the executive board of DREAMers on Grounds, which advocates for undocumented students and raises awareness of the challenges they face.

“I love it; it’s one of my favorite organizations that I am a part of,” Leal said. “It’s been a crazy year, and we have had to react really quickly to different events.”

The organization closely follows debates in Washington and hosts events, letter-writing campaigns and other efforts to raise awareness on Grounds and encourage students to educate themselves on immigration issues and how to be better allies for immigrants.

“We want to help undocumented students to feel welcome and to understand that they deserve the same opportunities as everyone else,” Leal said.

Coordinating events in response to the rapid ups and downs of the current debates can be exhausting, but Leal said it is all worth it when she hears how the events have helped fellow students feel supported.

“I have a really good friend who is undocumented, and I remember when I first met her, she was shy about telling her story. It took her a long time to tell me,” Leal said. “This year, she spoke at one of our events and told her story in front of hundreds of people. It was so powerful and motivational for me to keep using my voice.”

Leal has been so moved by the experience that she is already considering working in immigration law or a similar field after she graduates.

For now, though, she is enjoying her work as an advocate on Grounds, looking forward to applying to the Sociology and American studies programs and eagerly anticipating her favorite season at UVA.

“I remember last spring, when the weather was just completely beautiful, my friends and I would go to this ice cream shop – La Flor Michoacana – and come back and eat it on the Lawn with blankets and music,” she said. “We would play volleyball. It was beautiful and so relaxing.”

Those are the kinds of days that make this once-shy student feel like she has found her place. And, as Lamas points out, she has two more years to keep making an impact in the classroom and in the many groups and communities she has become a part of.

“I think that Nicole has always been a leader, and UVA, with its amazing opportunities for students who take them, has been a perfect match for her,” she said. “And, I think UVA is lucky to have her.”

Hear more from Leal and meet other members of the UVA community at this admission site.

Meet the New Cavalier on Horseback: She’s Eager To ‘Carry On a Legacy’ END_OF_DOCUMENT_TOKEN_TO_BE_REPLACED

Housing Changes Are a Breath of Fresh, Cool Air – Especially for Lawnies END_OF_DOCUMENT_TOKEN_TO_BE_REPLACED

Virginia Football – For All Virginia END_OF_DOCUMENT_TOKEN_TO_BE_REPLACED