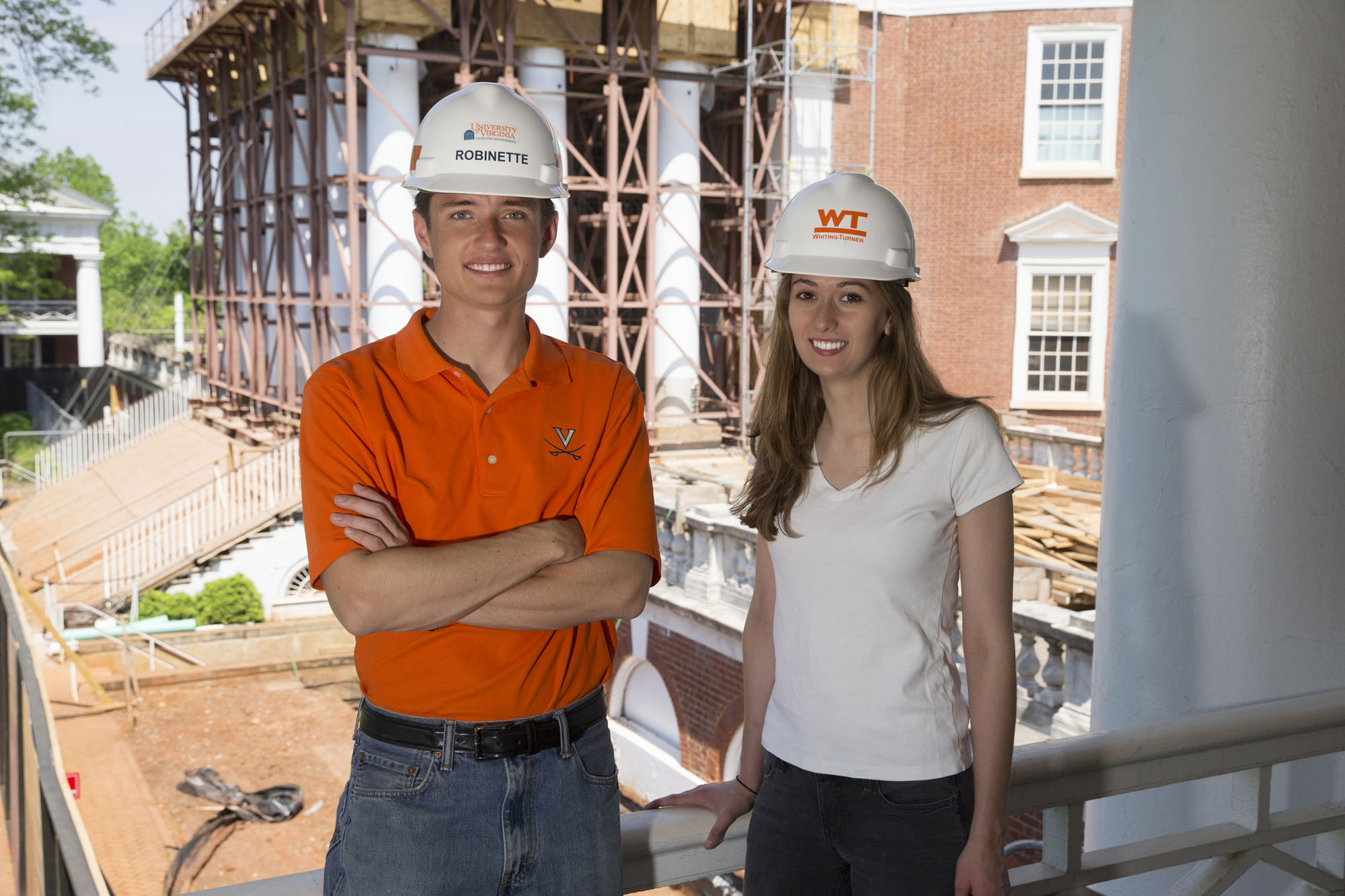 For several students at the University of Virginia, the Rotunda is a classroom – even as it is closed for renovation.

The iconic centerpiece of the U.Va. Grounds, the Rotunda is undergoing two years of extensive renovations. When it reopens in the summer of 2016, among its new features will be additional classroom and study space for students.

But for three students, the renovation site itself has been a classroom.

For the past two years, civil engineering major Grace Zammitti worked with Facilities Management project managers at the Rotunda, shadowing them, studying them, emulating them. Zachary Robinette, another civil engineering student, has been working for Facilities Management for about a year, and now, with Grace graduating, Katharine Graham, a rising third-year architecture student, has joined the team.

“They are support staff for our side and it gives them a chance to learn the real-world side of the business,” said Sarita Herman, a project manager on the Rotunda renovation. “Their main job is to pay attention and learn. And they can assist in small ways.”

They attend meetings, study plans and work with the U.Va. personnel overseeing the project. They don’t drive nails, but they contribute in other ways.

Zammitti, 22, of Ramsey, New Jersey, printed a small, three-dimensional replica of one of the recently installed marble capitals of the Rotunda. Workers from Pedrini’s Sculpture Studio of Carrara had laser-scanned parts of an original Jeffersonian capital and created a three-dimensional computer program for the computer-controlled lathe that carved most of the marble block to make the capital. Zammitti fed Pedrini’s program into the three-dimensional printer at the Engineering School and produced an exact small replica of the three-ton marble piece to prove that it could be done.

“I thought that was pretty cool, and they were really pretty excited about it,” said Zammitti, who has explored a lot of areas within the Rotunda, areas most people don’t even get close to.

“Steve Ratliff, a senior construction manager for Facilities Management, took me up on Phase I to the roof, which was one of the coolest experiences I have ever had, to stand on the roof of the Rotunda and look down on the Lawn. It totally changes your perspective of the Lawn, which was really, really neat.

“I feel like I have been in all the nooks and crannies of the Rotunda,” she said. “I’ve been on the upper level of the Dome Room; I got to watch them install the oculus. I went up on the scaffolding and so I was pretty much touching the Dome Room ceiling.”

Zammitti’s experience was a complement to her education. While she majored in engineering, she had minors in architecture and business, so she was able to follow the project from design through execution and finance. She now has a job with Rotunda contractor Whiting-Turner in its Washington D.C. office.

Not all of the students’ work is as dramatic as installing three-ton capitals and poking around the corners of the Rotunda. The interns sit in on meetings, and are also helping to catalog about 7,000 photographs and 50 to 75 banker’s boxes of notes and papers left behind by the late Murray Howard, who served for two decades as the University’s architectural historian. He died in 2007.

“These papers have been gone through, but not with the intensity necessary,” Herman said. “It’s a huge project and then when it’s done, we have to turn to Facilities Management’s records of the Academical Village.”

Robinette, 22, of Springfield, Missouri and Charlottesville, an Air Force ROTC cadet raised in a military family, is in his second year with Facilities. He worked on the last months of the New Cabell Hall renovation. Once that was completed, he transitioned to the Academical Village, and data management, cataloging the Howard papers.

His work at the Rotunda and Academical Village has put a practical patina on the work he has been doing in the classroom.

“It allows me to take what I’ve learned and put it to real-world engineering practice,” he said. “Also, U.Va. is an extraordinarily unique place in terms of history and architecture, and the Rotunda is the centerpiece of Grounds.”

Graham, 20, of Richmond, also enjoys being more connected to the University through its history.

“I am learning more about U.Va. and feeling more a part of it,” she said. “I have a deeper connection to my surroundings.”

Her connection to the Rotunda is also family-based. Her mother and her sister both worked at the Rotunda when they were students at the University, and when Graham thought about it as a first-year student, operations there were winding down in preparation for the building’s two-year closure.

“They suggested I work on the construction and I realized that would be more to my interest,” she said.

Graham is spending most of her time working with Howard’s records, but said there are other aspects of the Rotunda and Academical Village on which she will be working.

As an architecture student, she looks at the work at the Rotunda in terms of what needs to be done to a building to keep it alive and occupied and useful.

“I’m learning to do what is best for the building,” she said.

What Is the ‘4th Side’? END_OF_DOCUMENT_TOKEN_TO_BE_REPLACED