Students’ ‘Up to Us’ Campaign on Federal Debt Launches; Will Feature Mark Warner 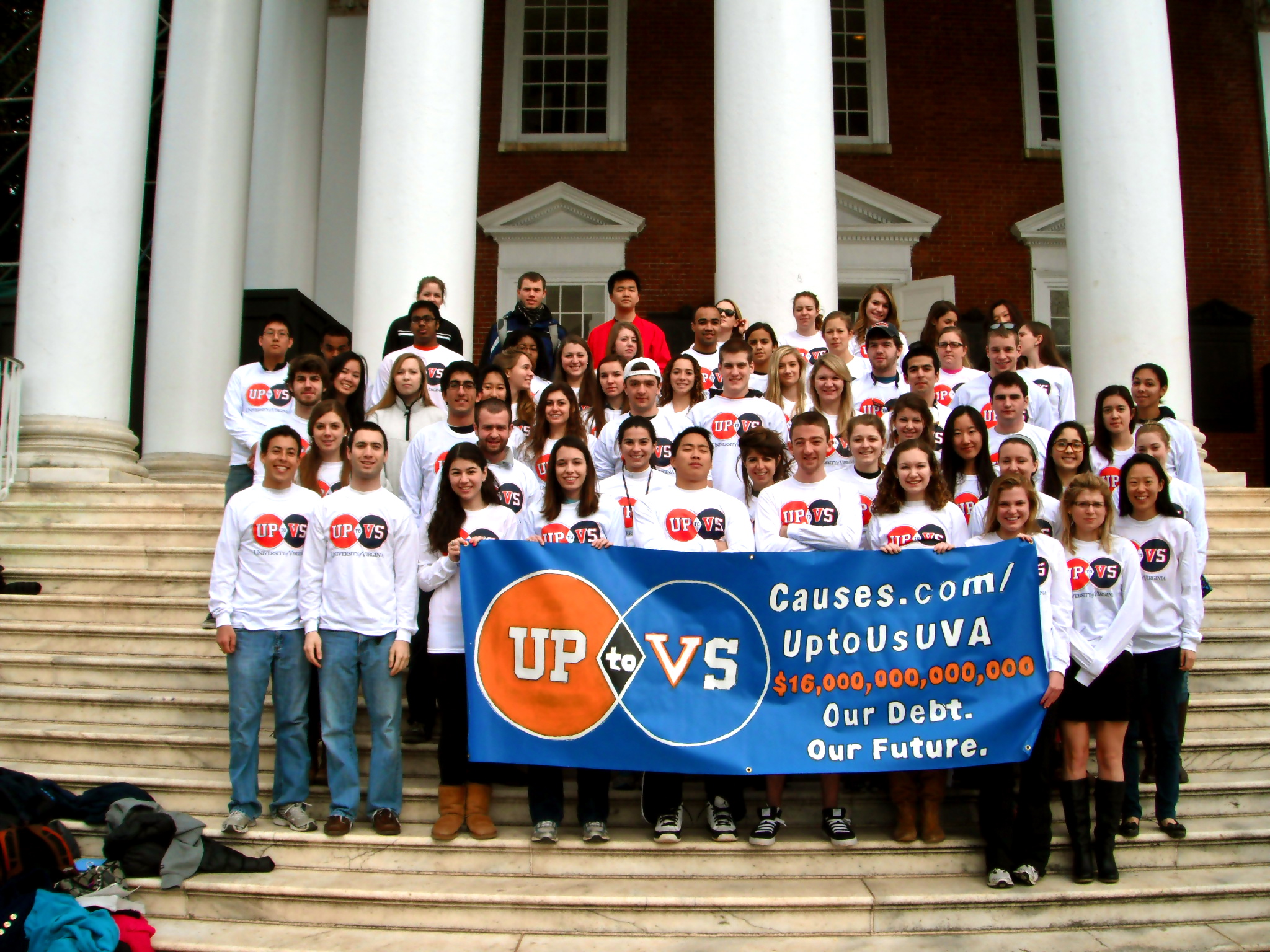 On Thursday and Friday, two events kicked off a two-month-long, student-led campaign to educate and engage the University of Virginia community about the effects of the rising federal debt – the cumulative total of annual federal budget deficits that now surpasses $16 trillion.

On Thursday, the U.Va. “Up to Us” campaign screened a documentary film about the debt, “I.O.U.S.A.,” in Newcomb Hall Theater, followed by discussion led by James Savage, a politics professor in U.Va.’s College of Arts & Sciences and an expert on the federal budget and policy. The event drew about 40 students, said organizer and campaign co-leader Lena Shi, a fourth-year global development studies major in the College who is also earning a master’s of public policy from the Frank Batten School of Leadership and Public Policy.

“With this campaign, we want to start the conversation about the national debt – what it means, how it relates to us and what can we do about it,” Shi said Friday as she introduced the second kickoff event: a “HOOs Talking about the National Debt” discussion in Garrett Hall that drew more than 60 students.

Led by five fourth-year students, the U.Va. “Up to Us” campaign, which runs through March 2, is part of the Up To Us nationwide campus competition in which student teams at 10 colleges, including U.Va., are competing to create the most thought-provoking and engaging campus campaign about the effects of the rising federal debt.

The competition – created by the Clinton Global Initiative University, Net Impact and the Peter G. Peterson Foundation – will be judged by Chelsea Clinton, former presidential spokesman George Stephanopoulos, and former Clinton White House chief of staff Erskine Bowles and former U.S. Sen. Alan Simpson, who co-chaired the bipartisan National Commission on Fiscal Responsibility and Reform in 2010 to provide a roadmap for “fiscal sustainability over the long run.”

The winning student team will receive $10,000 and will be recognized by former President Bill Clinton at the Clinton Global Initiative University conference in April.

The U.Va. “Up to Us” campaign will include almost 20 other events and efforts, Shi said, including weekly Flash Seminars, starting Jan. 31; surveys of student knowledge and attitudes about the debt; a forum with the University Democrats and College Republicans (Feb. 21); Bike Against the Debt workouts (Feb. 1); a national-debt themed trivia night at Mellow Mushroom; and a student delegation visit to Capitol Hill, including meeting with Senate Budget Committee staffers.

The campaign leaders are producing three short video commercials about the debt featuring comments from students and professors.

The U.Va. team currently leads the Up to Us national competition, according to a Causes.com leaderboard, Shi said.

As part of the campaign, U.S. Sen. Mark Warner (D-Va.) will speak about the debt Feb. 11 at noon in the Newcomb Hall Ballroom, Shi said. Registration details will be announced soon. U.Va. President Teresa A. Sullivan will introduce Warner.

Warner, a former Virginia governor, has been active on the issue of fiscal responsibility while serving in the Senate. He helped organize a bipartisan coalition of 45 senators and 100 members of the House of Representatives to urge action on the debt. He also chairs the Senate Budget Committee’s Task Force on Government Performance, which looks for efficiency gains and cost savings from federal agencies and programs.

The U.Va. Up to Us campaign is supported by a growing list of U.Va. entities, including the Darden School of Business, Batten School, School of Law, Miller Center, School of Engineering and Applied Sciences, and the Woodrow Wilson Department of Politics.

For All of Us END_OF_DOCUMENT_TOKEN_TO_BE_REPLACED