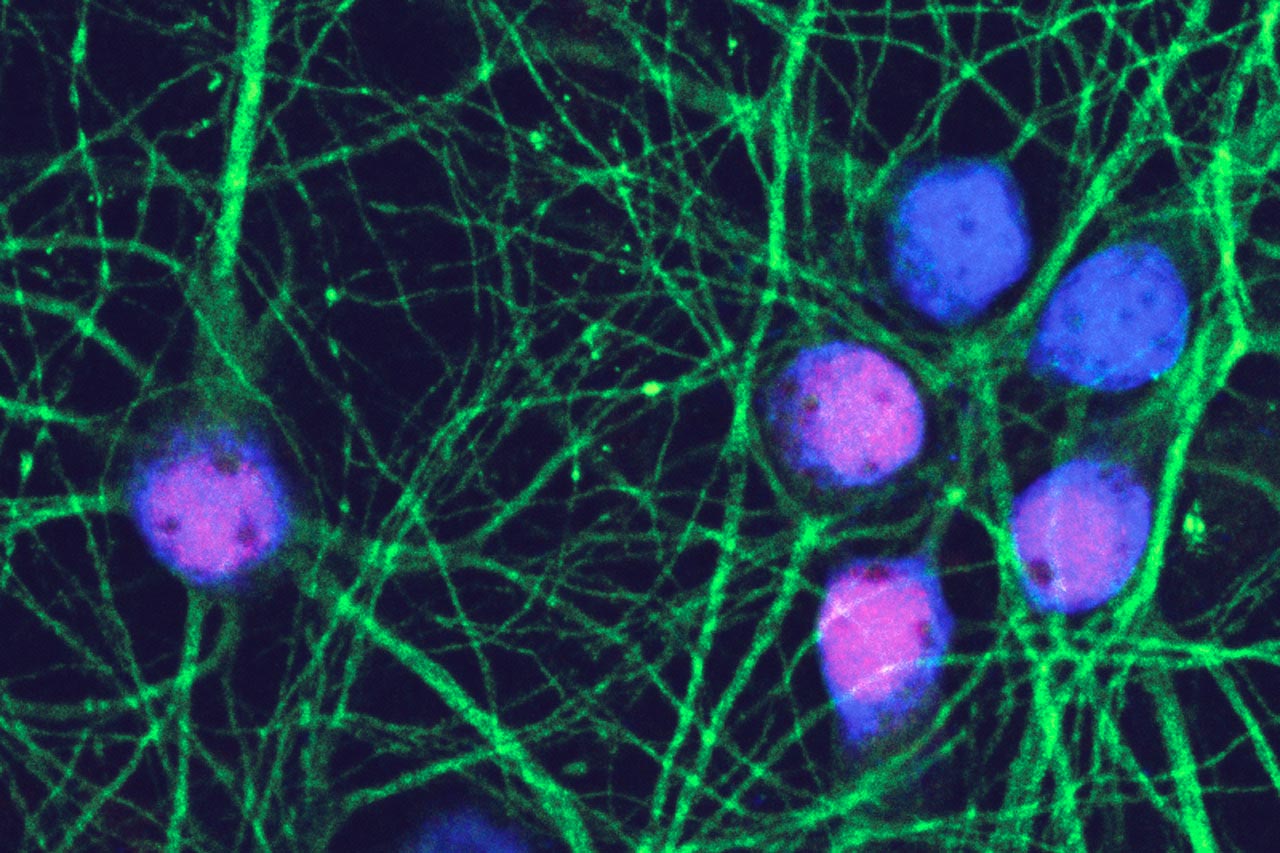 The reddish-blue mouse neurons in this image have reentered the cell cycle after exposure to amyloid beta oligomers, and thus are primed for death. (Image by Erin Kodis and George Bloom)

About 50 percent of people who reach the age of 85 will develop Alzheimer’s disease. Most will die within about five years of exhibiting the hallmark symptoms of the disease – severe memory loss and a precipitous decline in cognitive function.

But the molecular processes that lead to the disease will have begun years earlier.

Currently, there are no known ways to prevent the disease or to stop its progression once it has begun. But research at the University of Virginia offers new understanding of how the disease develops at the molecular level, long before extensive neuronal damage occurs and symptoms show up.

Additionally, the researchers have found that an FDA-approved drug, memantine, currently used only for alleviating the symptoms of moderate-to-severe Alzheimer’s disease, might be used to prevent or slow the progression of the disease if used before symptoms appear. The research also offers, based on extensive experimentation, a hypothesis as to why this might work.

The findings are published currently online in the journal Alzheimer’s & Dementia.

“Based on what we’ve learned so far, it is my opinion that we will never be able to cure Alzheimer’s disease by treating patients once they become symptomatic,” said George Bloom, a UVA professor and chair of the Department of Biology, who oversaw the study in his lab. “The best hope for conquering this disease is to first recognize patients who are at risk, and begin treating them prophylactically with new drugs and perhaps lifestyle adjustments that would reduce the rate at which the silent phase of the disease progresses.

“Ideally, we would prevent it from starting in the first place.” 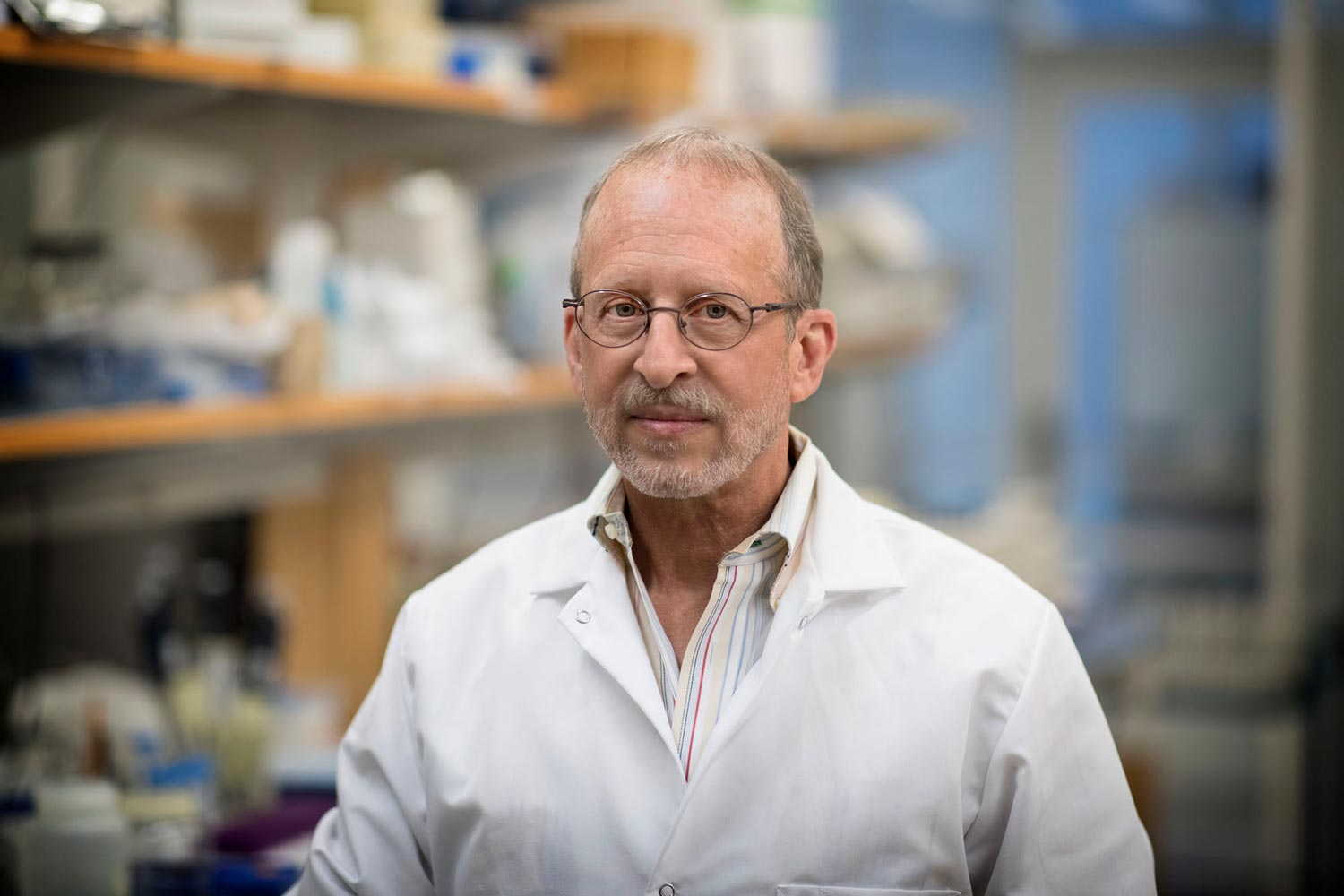 As Alzheimer’s disease begins, there is a lengthy period of time, perhaps a decade or longer, when brain neurons affected by the disease attempt to divide, possibly as a way to compensate for the death of neurons. This is unusual in that most neurons develop prenatally and then never divide again. But in Alzheimer’s the cells make the attempt, and then die.

“It’s been estimated that as much as 90 percent of neuron death that occurs in the Alzheimer’s brain follows this cell cycle reentry process, which is an abnormal attempt to divide,” Bloom said. “By the end of the course of the disease, the patient will have lost about 30 percent of the neurons in the frontal lobes of the brain.”

Erin Kodis, a former Ph.D. student in Bloom’s lab and now a scientific editor at AlphaBioCom, hypothesized that excess calcium entering neurons through calcium channels on their surface drive those neurons back into the cell cycle. This occurs before a chain of events that ultimately produce the plaques found in the Alzheimer’s brain. Several experiments by Kodis ultimately proved her theory correct. 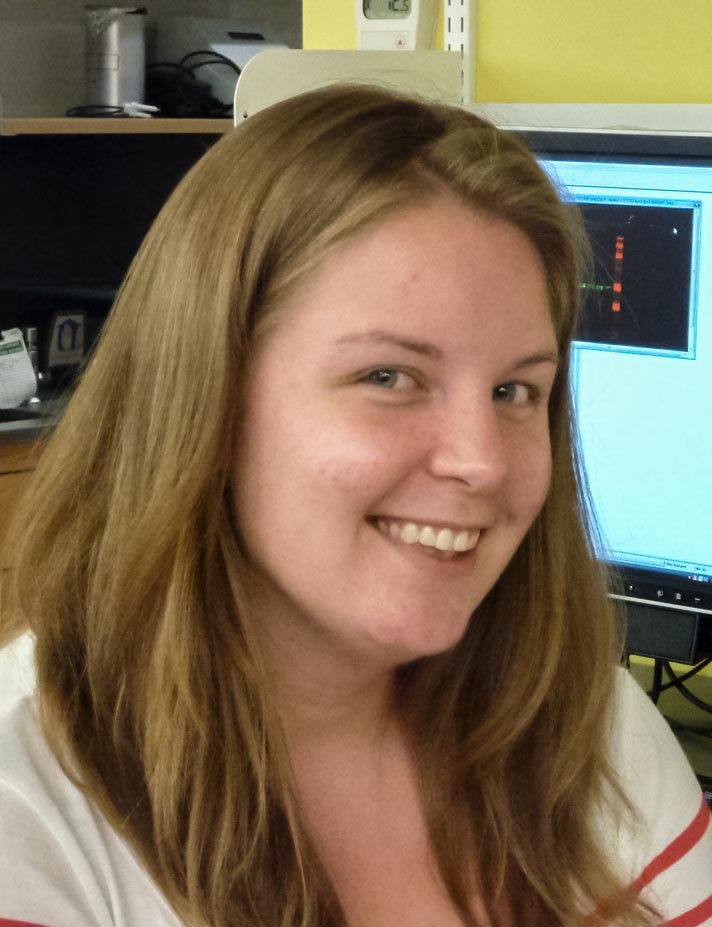 Erin Kodis, who last May earned her Ph.D. in biology, conducted the study. (Contributed photo)

The building blocks of the plaques are a protein called amyloid beta oligomers. Kodis found that when neurons are exposed to toxic amyloid oligomers, the channel, called the NMDA receptor, opens, thus allowing the calcium flow that drives neurons back into the cell cycle.

“The experiments suggest that memantine might have potent disease-modifying properties if it could be administered to patients long before they have become symptomatic and diagnosed with Alzheimer’s disease,” Bloom said. “Perhaps this could prevent the disease or slow its progression long enough that the average age of symptom onset could be significantly later, if it happens at all.”

Side effects of the drug appear to be infrequent and modest.

“I don’t want to raise false hopes,” Bloom said, but “if this idea of using memantine as a prophylactic pans out, it will be because we now understand that calcium is one of the agents that gets the disease started, and we may be able to stop or slow the process if done very early.”

Bloom currently is working with colleagues at the UVA School of Medicine to design a clinical trial to investigate the feasibility of using memantine as an early intervention.

Message from President Ryan Regarding Fatal Shooting on Grounds END_OF_DOCUMENT_TOKEN_TO_BE_REPLACED