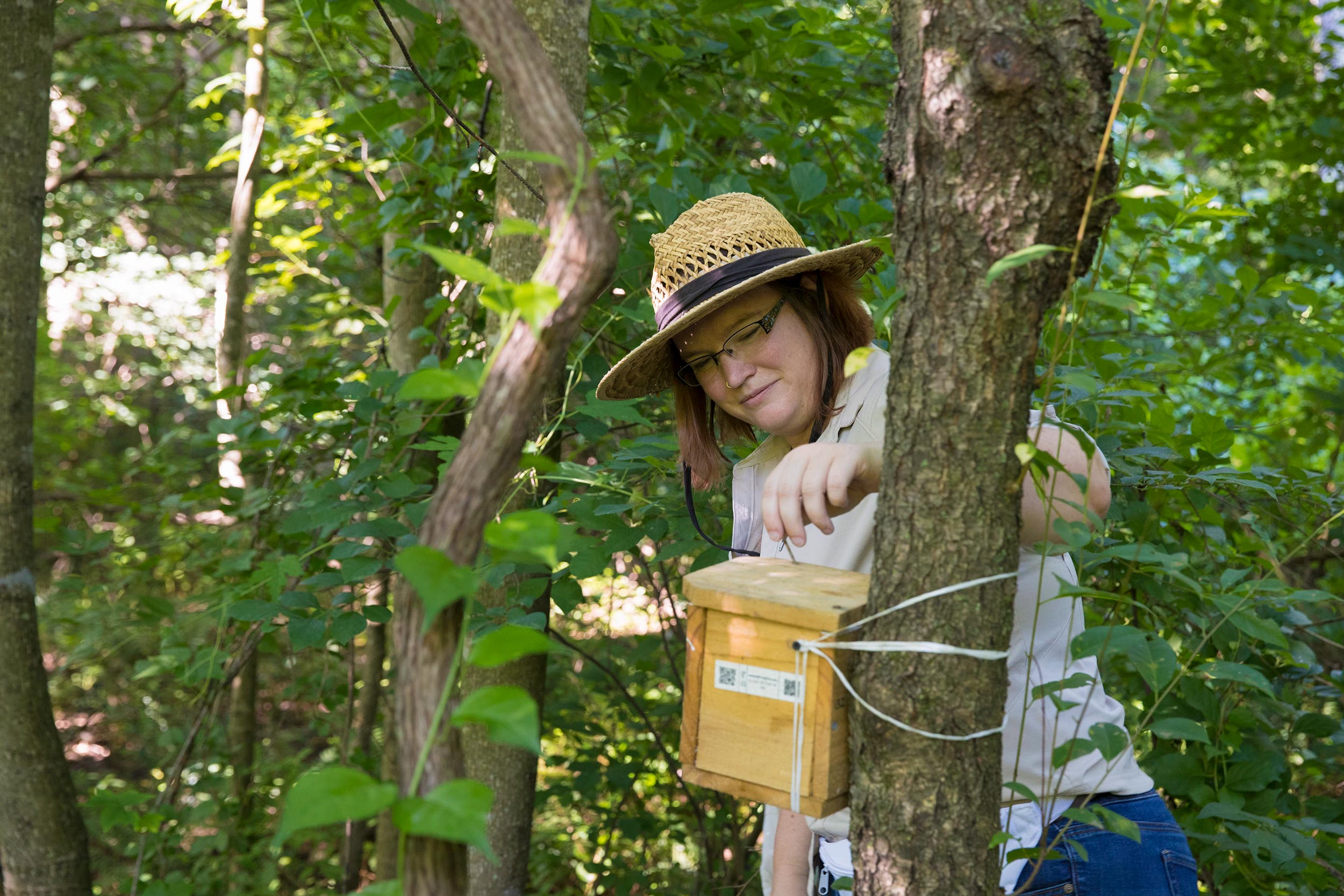 Imagine becoming a zombie and digging your own grave. OK, don’t imagine that.

Imagine a bumblebee becoming a zombie and digging its own grave. Now this actually happens, in a sense.

Bumblebees, which are native to North America, frequently are attacked in the air by a type of parasitoid fly called a conopid. The fly will implant the bee with an egg that – during a 10- to 14-day span – will grow within the bee’s abdomen and somehow induce it to dig its own grave. The bee dies underground, and the fly larva pupates and feeds on the bee’s innards as it hibernates through the winter inside the carcass. In the spring, the fly emerges from the bee as an adult and goes about its business preying on various insects. In the summer, the fly will attack and zombify a bumblebee for its own proliferation.

What effect does this have on bumblebee populations? That is what Amber Slatosky, a University of Virginia Ph.D. candidate in environmental sciences is working to understand. 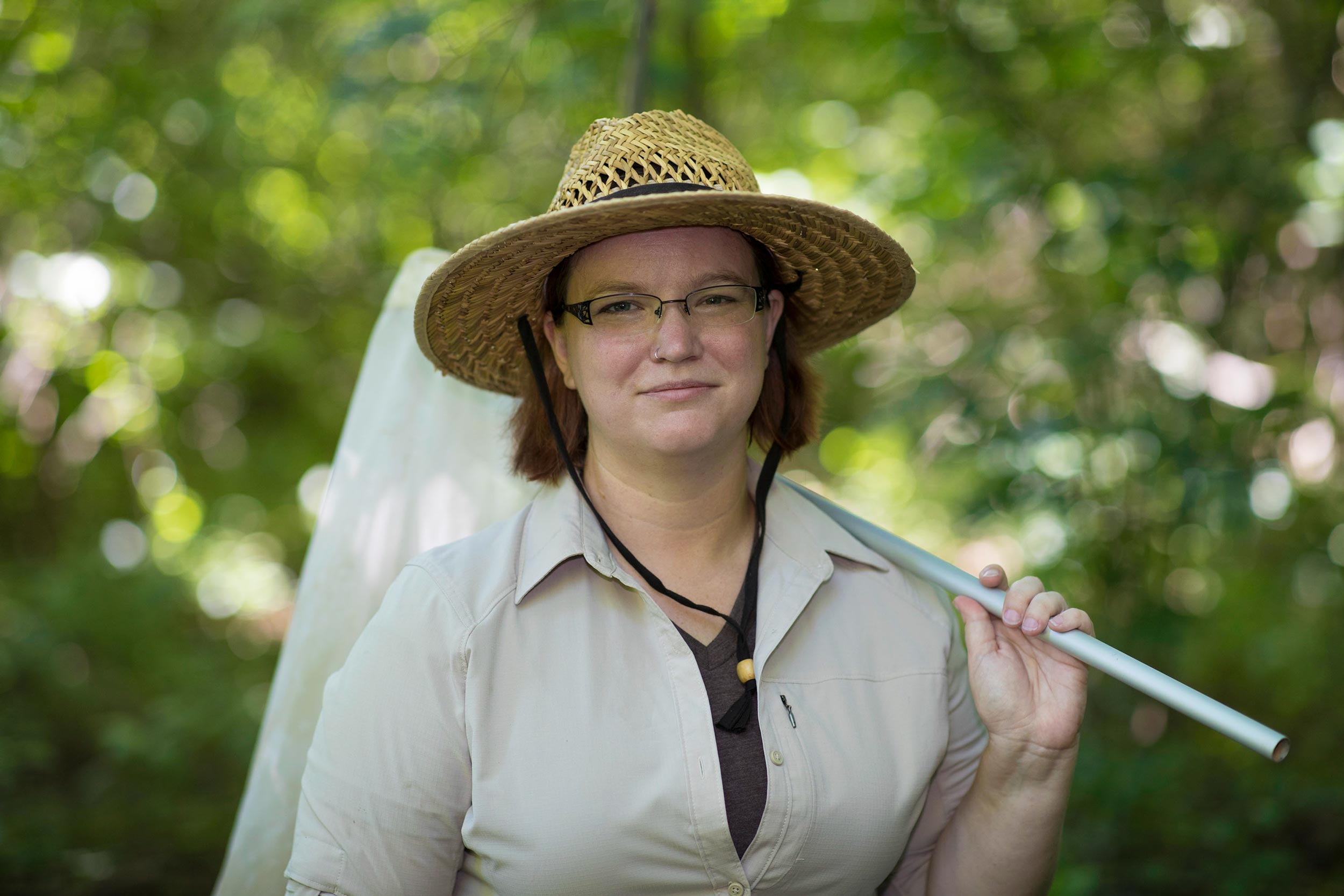 Slatosky has set up almost 200 nesting boxes at several locations in Virginia to attract queen bumblebees and encourage nesting so she can study bee behavior and the effects of conopids on bumblebee populations across species. Most of the boxes are at UVA’s Blandy Experimental Farm and Arboretum in Clarke County, and at UVA’s Observatory Hill. Slatosky also has set up 15 boxes in Charlottesville’s McIntire Park, in a planned botanical garden area.

Bumblebee populations are declining for many reasons, she said – pesticide use, loss of habitat, climate change, competition from non-native bees, and parasites. Conopids are a natural threat because they shorten the lifespan of bees, change their foraging behavior and may cause the infected bees to abandon their colonies, which can affect the hive’s population.

Slatosky keeps several of her study colonies under constant surveillance in high-tech boxes where each worker bee in a colony – which can range from 20 to 400 workers – is identified by a glued-on numbered tag for visual identification and a miniscule microchip identifier.

“The bees’ comings and goings are recorded by a microchip reader and a motion-sensing camera,” Slatosky said. “The temperature and humidity, which affects behavior, also are recorded. We can watch video as the workers bring in food and exit to forage. This data helps us determine how much foraging the bees do, and how much pollen and nectar they bring to the nest.”

Slatosky is finding that, upon examination, 20% to 80% of worker bees are infected by conopid flies, depending on location, which can be “an additional stress” on bumblebee populations. She is trying to sort out the bigger effects of this on overall bumblebee populations, in relation to other broader threats that are putting bumblebees in decline.

Overall, she is seeing successful nesting at many of her nesting box sites as she gains a unique perspective on the secret lives of bees and their foraging behavior.

So far, her nesting boxes in the McIntire Botanical Garden have not attracted queen bumblebees, but there are bumblebees in the garden area, which is still in the design phase.

“The botanical garden offers a fantastic opportunity to do some valuable research on insect populations in a wild area,” Slatosky said.

“It has been our great pleasure to welcome Amber [Slatosky] into the McIntire Botanical Garden, even as our garden is not fully open to the public,” said Joan Swanberg, president-elect of the garden’s board of directors. “Important research, like Amber’s bumblebee study, is a key component in the mission of botanical gardens like ours and provides yet another example of the way the McIntire Botanical Garden can provide rich educational resources to our community. We look forward to future collaborations with UVA as we both work toward supporting, understanding and celebrating our natural world.”

Slatosky said that people can encourage bumblebee foraging in their yards by planting native flowering vegetation, and not just ornamentals. The bees are docile, interesting to watch and won’t sting unless a hive is heavily disturbed.

“Most nurseries, and particularly plant societies, can help people select plants that will be good for bumblebees, which are so important to a healthy ecosystem,” she said. “By creating good habitat, we can help grow the populations of these important native pollinators.”

At UVA, There Is a Club for Everyone END_OF_DOCUMENT_TOKEN_TO_BE_REPLACED