Study Suggests Learning Rhythm May Be Like Learning a Language 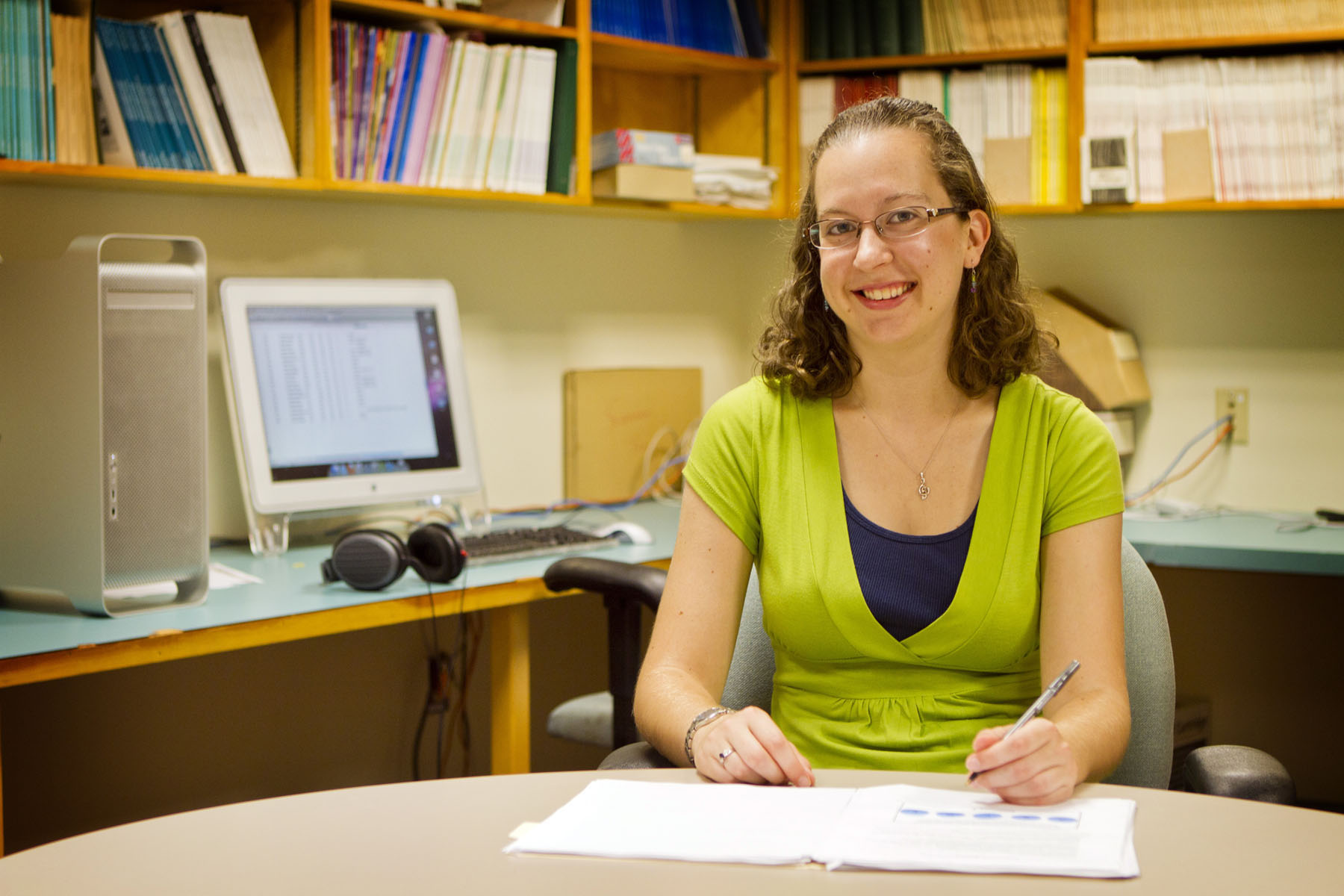 Listen to the UVA Today Radio Show report on this story by Kate Colwell:

August 1, 2011 — In psychology professor Michael Kubovy's lab at the University of Virginia, salsa music is playing. The researchers are not having a dance party – they're learning how the brain works.

Laura Getz, a psychology student in U.Va.'s Graduate School of Arts & Sciences whose proposal earned her a graduate research fellowship from the National Science Foundation, is studying how the brain organizes auditory input from the world. Her experiment, which tests to see whether subjects can match different kinds of salsa music – like mambo, meringue, bamba and calypso – with their correct beat patterns, examines how human auditory systems perceive and organize sounds.

She chose salsa because it is so highly organized and standardized that it is easy to manipulate. "It's less ambiguous than other forms of music," she said.

The beat patterns are created by hitting wooden clave sticks together. These clave patterns are said to form the structural foundation of all Latin music, but Getz wondered how crucial they were to the untrained listener.

"Musicians say the clave pattern is of fundamental importance," she said. "I was interested to see if that is true."

By removing the beats from the music and replacing them with manipulated beat patterns, some of which did not synchronize with the music, the experiment tested to see whether people used syncopation as a relevant cue to figure out the patterns.

Getz teamed up with Scott Barton, a Ph.D. candidate from the College's McIntire Department of Music, and sought out test subjects with different levels of musical background. Barton, who is writing his dissertation in composition and computer technologies, wrote the software for the experiment. He synthesized clave examples, superimposed them onto real music and integrated these into the software.

The duo used four samples each of mambo, meringue, bamba and calypso dance music and put five clave patterns on each sample. Subjects were then asked to listen to the different clave choices for each musical selection and choose which rhythm sounded correct on the computer.

The experiment took a surprising turn when these subjects produced strikingly different results. While musicians and dancers had varying degrees of success with the task, non-musicians appeared to be picking choices at random even on the 24th trial.

Kubovy, whose lab investigates the general rules for perceptual organization in vision and sound, explained that the experimental results in progress display a "very interesting phenomenon that unless you are quite trained in this form of music, it doesn’t come naturally to you to perceive these rhythmic patterns."

This may come down to the amount and kind of music to which a person has been exposed over time, he said. "People who love and dance salsa are sensitive to these things, but people who grew up in a different environment listening to pop music really seem to have no clue as to what's going on in this music."

Getz and Kubovy expected the results to follow established principles of perceptual organization. They also predicted that subjects would pick up a rhythm hierarchy through passive listening, like the tonal hierarchy, where some tones are perceived as part of a pattern. Instead, the non-musical subjects' inability to discern different musical patterns prompted Kubovy to come up with his own interpretation for how the brain acquires rhythmic perceptual organization.

"I suspect it's a little bit like learning a language," Kubovy said. "What we think is that there are certain things that are very much language-like in the perception of rhythm and that their perceptual organization is based on experience."

The clave beat, Kubovy explained, is so implicit, it's like a skeleton for the music – it doesn't show up on the surface. Salsa dancers feel it in their bodies and perceive and move to it even though it is not really being played. Kubovy suggests that salsa dancers and people who have grown up in the Caribbean are like native speakers of salsa, and that other people acquire salsa as a second language. The untrained subjects in the experiment show that rhythm perception does not come naturally, but is learned, which brings into question what other perceptual structures must be learned over time.

"We don't know which kinds of patterns come naturally and which don't, so what this is doing is opening up the whole question of what is universal and what is not," Kubovy said.

The results for this study could have implications for music education. As Kubovy explained, all languages have nouns but not all languages have a past tense. This experiment unlocks the possibility that maybe some rhythm patterns like 4/4 time may come readily to everyone because they are universal, whereas the sophisticated syncopation of salsa must be learned.

As a composer, Barton is interested in results as an indicator that the listener may hear music very differently from how the composer intended it.

"What's important to you is not necessarily what's going to be perceived from the listener's perspective," he said. "I think that this experiment gets that and that's why it could be significant."

Kubovy's lab, which is funded by the NSF and previously the National Institutes of Health, is about to start a study of a wide range of syncopated rhythms from Africa and the Caribbean. The lab is recruiting salsa dancers without music experience to participate in the study before fall semester begins. To sign up, email kubovylab.uva@gmail.com.

What Is the ‘4th Side’? END_OF_DOCUMENT_TOKEN_TO_BE_REPLACED