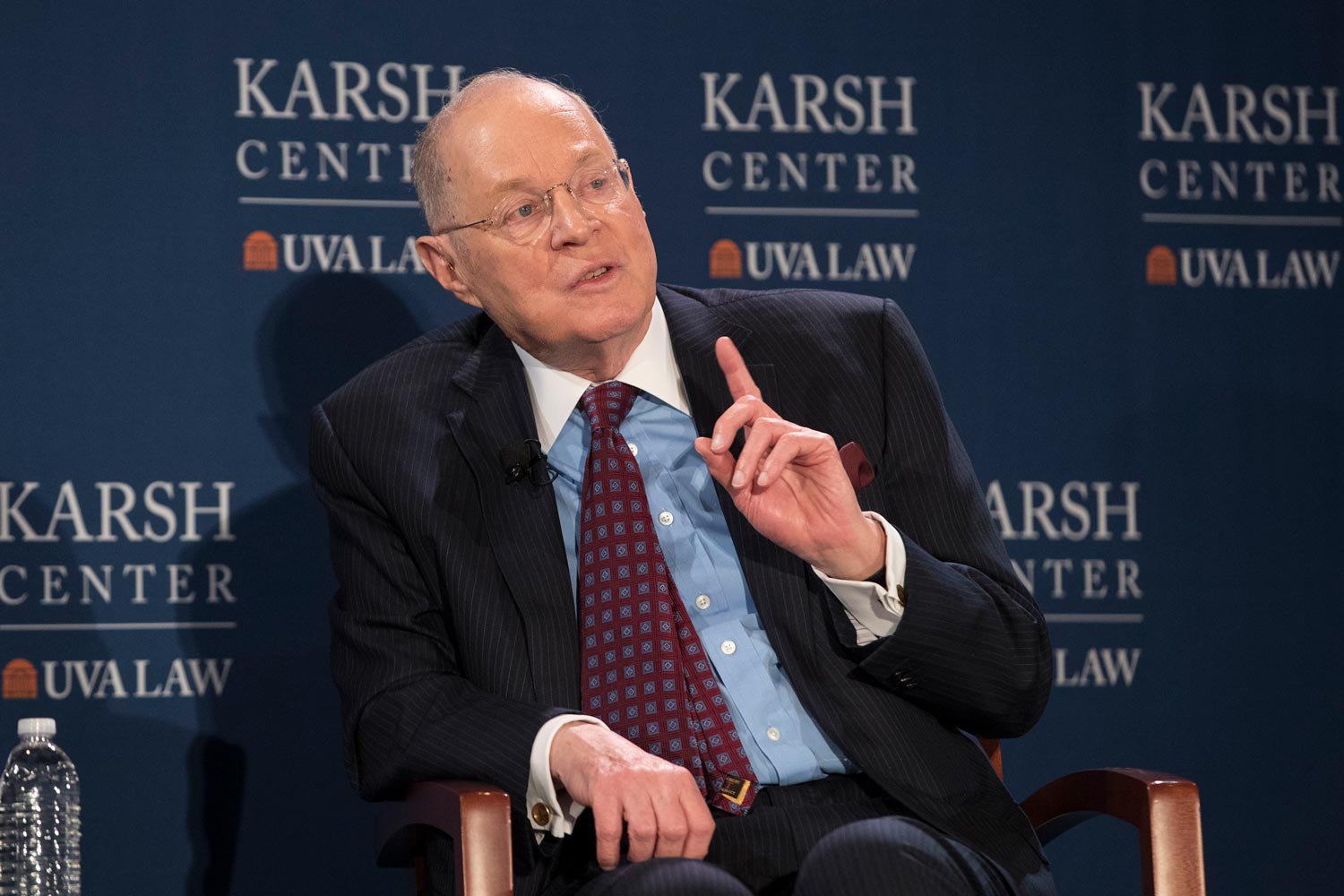 Retired Supreme Court Justice Anthony Kennedy spoke Friday at the University of Virginia School of Law during an event sponsored by the Karsh Center for Law and Democracy. (Photo by Dan Addison, University Communications)

Retired U.S. Supreme Court Justice Anthony Kennedy said Friday at a special event held at the University of Virginia School of Law that he has no regrets about retiring from the court when he did — and that despite recent contentiousness related to confirming new justices, the court and its time-honored processes still work.

“The public will see the system works,” Kennedy said. “Over time, over a very short time, you will see that the system has worked and these justices are working very well with their colleagues."

The conversation doubled as the inaugural event for the new Karsh Center for Law and Democracy, which is housed at the Law School, and a future episode of “The David Rubenstein Show,” which will be broadcast on Bloomberg and PBS.

Financier-philanthropist David Rubenstein interviewed Kennedy, 82, in one of Kennedy’s first public appearances since leaving the court this summer after three decades.

“None at all,” said Kennedy, who explained that he wanted to spend more time with his wife, Mary, who was in attendance.

Kennedy is the first justice to have two of his former law clerks ascend to the Supreme Court. They also happen to be the most recent additions. Neil Gorsuch, with whom Kennedy served alongside briefly, replaced the late Antonin Scalia. Brett Kavanaugh followed after Kennedy’s retirement.

Kennedy rejected the idea that a justice can hand-pick his replacement.

Kavanaugh’s appointment and confirmation were the subject of intense vitriol. While Kennedy did not address the allegations leveled at his former clerk, he said he believed the court would continue to be a civil institution.

Law Dean Risa Goluboff, in her introductory remarks, noted that Kennedy was the last justice to be confirmed unanimously, in 1988. Kennedy’s thumbs up after the remark drew laughs, given the frequent political wrangling over appointees.

“Quite a feat,” Goluboff said.

Kennedy attributed his oath to review cases with an open mind for turning his vote in Obergefell.

"I think it surprised me," he said. "The nature of the injustice is you can’t see it in your own time."

He also said that adopted children who wouldn’t have the benefit of married parents weighed heavily on his mind as he spent the weekend grappling over the 2015 decision.

“As I thought about this, and I thought about it more and more, it seemed to me wrong —unconstitutional — to say that over 100,000 adopted children could not have their parents married.”

He spoke less about Citizens United, but repeated the idea that, to have decided otherwise would have curtailed free speech in films and other media.

A large portion of Kennedy’s comments were responses to requests from Rubenstein to explain how the court works. Kennedy used the opportunity to demystify the institution, and to express his confidence that the model serves to provide outcomes with integrity.

“Your duty in every case is to ask why you are doing what you are about to do,” he said he tells judges. “If you make up your mind in advance, you are not following that oath.”

He said he worries that democratic dysfunction portrayed in the media creates a false impression and hurts the argument for our system of government abroad.

“We’re not making the case for democracy,” he said.

The Karsh Center for Law and Democracy, funded through the generosity of law alumni Martha Lubin Karsh ’81 and Bruce Karsh ’80, aims to facilitate discussion about some of today’s most pressing issues related to our civic function through talks, interdisciplinary programming and symposia. Professor Micah Schwartzman is the center’s inaugural director.

The center is funded as part of a $44 million gift from the Karshes, the largest donation in Law School history. The Karshes are educational philanthropists who met at UVA Law. They announced the gift in May.

Bruce Karsh, a former Kennedy clerk from when Kennedy served on the U.S. Court of Appeals for the Ninth Circuit, credited his “first full-time boss” with providing an early path to greater success.

The couple announced, as part of the event, that they were endowing a faculty chair in Kennedy’s name.

Among his accolades, Kennedy received the Thomas Jefferson Foundation Medal in Law in 2003; the medals are the University’s highest external honor.

When Less Is More: How Harnessing the Power of Subtraction Can Add to Life END_OF_DOCUMENT_TOKEN_TO_BE_REPLACED