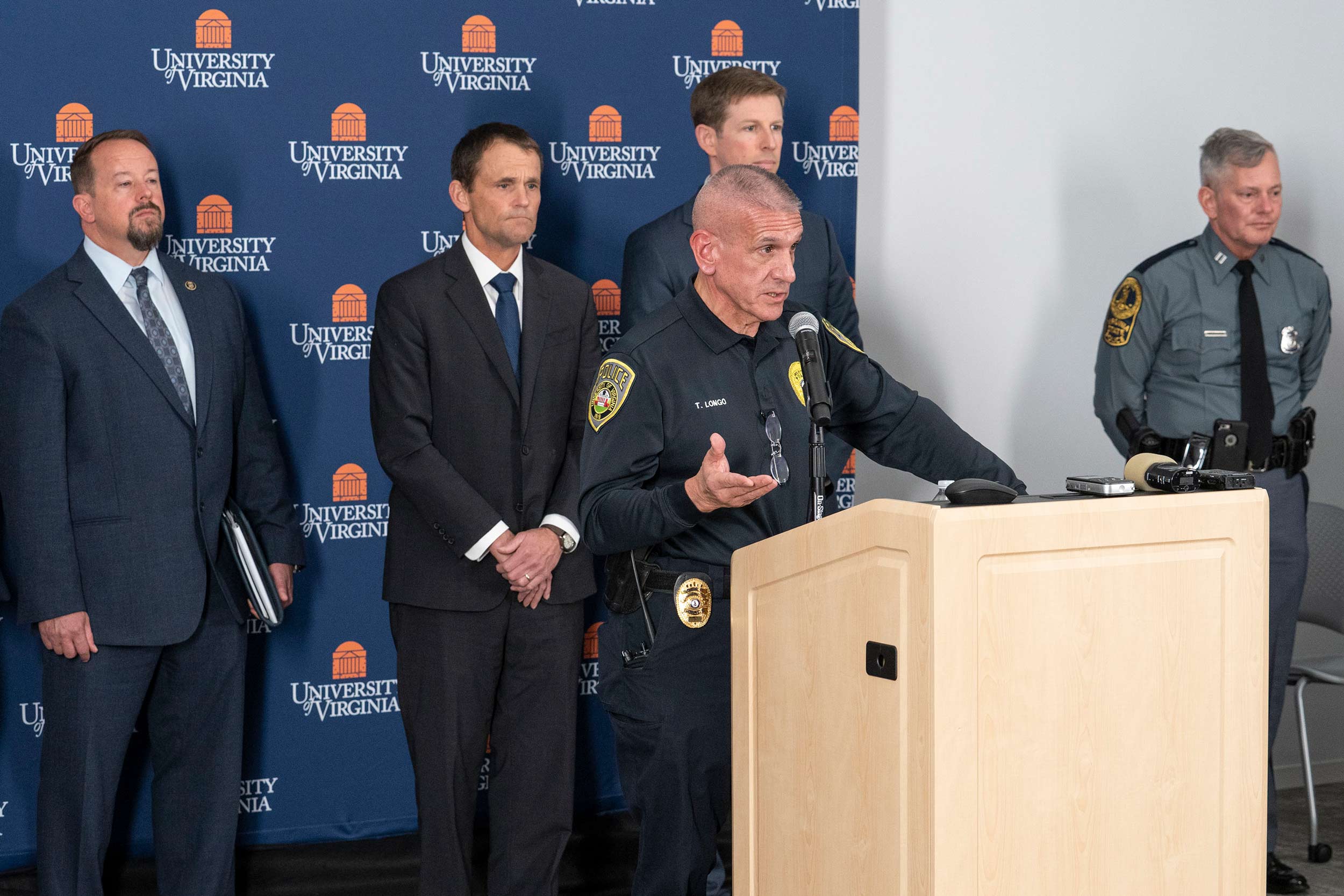 UVA Police Chief Tim Longo provides a morning update on the fatal shootings of three University football players. Two other students were wounded. During the news conference, Longo was informed the suspect had been arrested. (Photo by Dan Addison, University Communications)

Three members of the University of Virginia football team were shot and killed on a charter bus that had just returned to Grounds Sunday night from a class field trip, University police said Monday. Two other students were wounded and are in the hospital as of Monday afternoon.

During an 11 a.m. news conference Monday to discuss the shooting and the search for the gunman, a Virginia State Police captain interrupted University Police Chief Timothy Longo during his address to whisper that the suspect was in custody.

Police and University officials said the suspect was also a University student who had at one time also played for the football team, but it wasn’t clear if he had a relationship with the other players on the bus.

“This is a sad, shocking and tragic day for our UVA community,” Ryan said. “Let me say how deeply sorry I am for the victims and for their family and friends.”

Just before 11 a.m., University officials ended the shelter-in-place order that had been in effect more than 12 hours. They said about 500 students spent the night “sheltered in buildings throughout Grounds, in libraries, classrooms and other spaces” until the directive was lifted.

University officials canceled classes Monday and postponed the men’s basketball game that had been scheduled for Monday night in John Paul Jones Arena. Throughout the early morning, a series of alerts to students, faculty and staff said police officers from several agencies were searching on and off Grounds for the suspect, identified as Christopher Darnell Jones Jr.

Henrico Police issued a statement later Monday saying that they had taken Jones into custody “without incident” in the 5700 block of Edgelawn Street, in the eastern portion of the county.

Longo said Jones would be charged with three counts of second-degree murder and using a gun in a crime. Longo said the charges could later be upgraded if “certain facts and circumstances arise.”

University officials said the shooting happened around 10:30 Sunday night on a charter bus that was returning students from a play in Washington as part of a class activity. Two of the students – Perry and Chandler – were found dead inside the bus. Davis died at a hospital, officials said.

Officials said they estimated there were about 25 students on the bus, but said it was unclear if Jones was one of those students.

As police converged on the bus, UVA Emergency Management issued the first of several notifications to students, faculty and staff reporting gunshots at Culbreth Garage near the Drama Building. Other alerts quickly followed telling students to shelter in place and that the gunman was at large. The alerts later included the suspect’s name and photograph, what he was seen wearing, and the license plate of the SUV he was believed to be driving.

Monday morning, Longo said Jones had previously been the source of concerns.

“Mr. Jones came to the attention of the University of Virginia’s threat assessment team” first in the fall of 2022, Longo said. The chief said someone notified the Office of Student Affairs that Jones talked about having a gun. However, the chief said, the person who notified student affairs said he did not see a gun and no one reported that Jones had a firearm.

Longo said Jones' name came up as part of a hazing claim, and that he had been charged with a concealed-weapon violation that Jones did not report to the University.

However, Longo said the University Police Department had no previous contacts with Jones. No one speculated on a motive, saying that was under investigation.

“This has been an unimaginably sad day for our community,” Ryan said. “The entire University community is grieving this morning. My heart is broken for the victims and their families and for all who knew and loved them.”

Ryan urged students to take advantage of counseling through Student Health and Wellness and for staff to reach out for help through the Faculty & Employee Assistance Program.

“We need to comfort and support each other and those closest to the victims of this horrendous shooting,” Ryan said.

“Please know we will do everything we can to honor their lives,” Ryan continued. “And we’ll come together soon as a community to mourn these losses.”