These 3 ’Hoos Are Part of the College Football Playoff Team 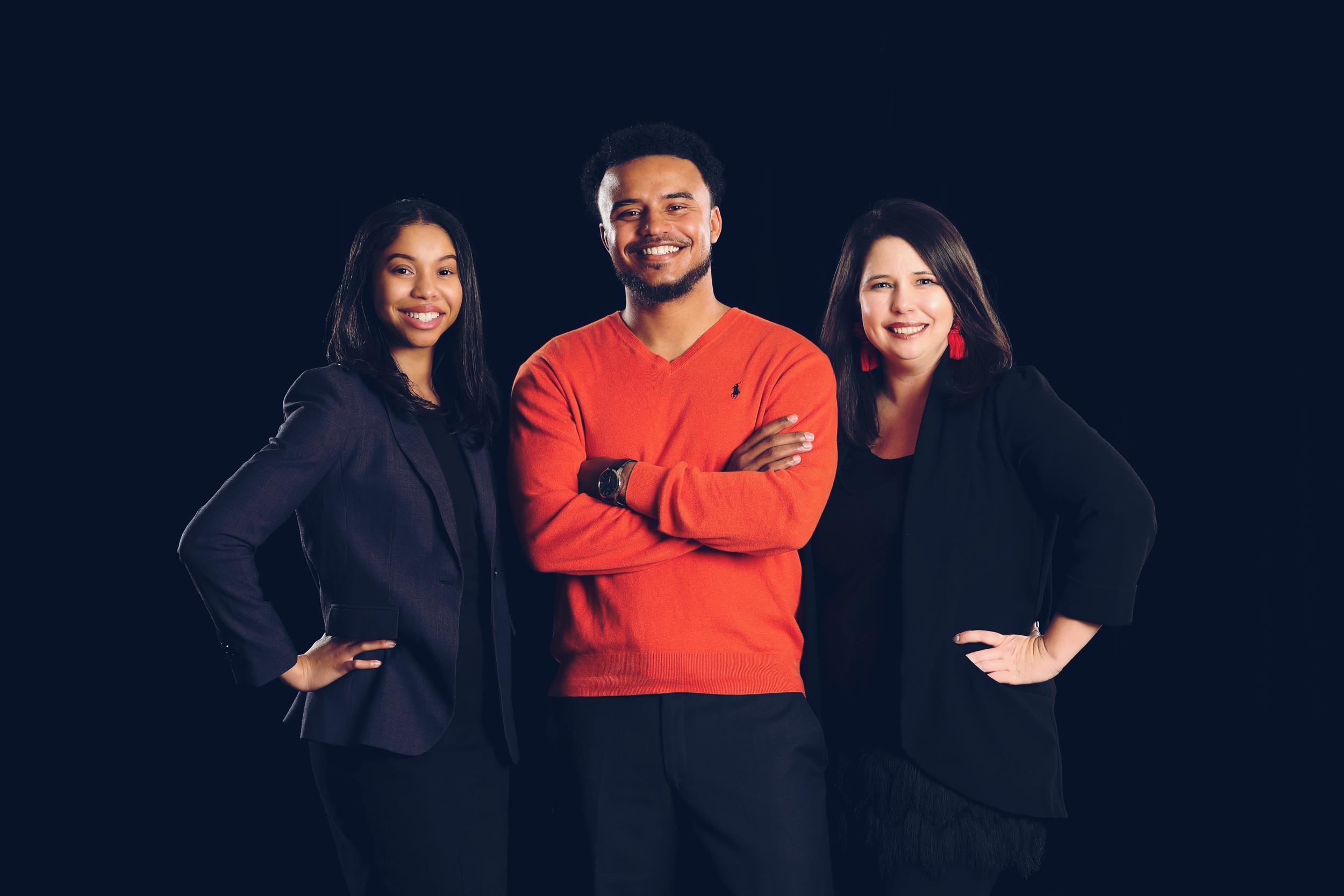 The University of Virginia football team, which made great strides this year in qualifying for its second straight bowl game under head coach Bronco Mendenhall, hopes someday to be in contention for a spot in the four-team College Football Playoff, which crowns the national champion.

Until then, the ’Hoos’ representation at the sport’s biggest event comes in the form of three alumni who work behind the scenes as part of a 26-member staff based in Irving, Texas.

Now in her sixth year at the College Football Playoff, 2005 alumna Allison Doughty serves as the director of events and hospitality services. The daughter of Hall of Fame Roanoke Times sportswriter Doug Doughty coordinates private events and meetings that take place throughout the year and manages volunteers and hotel accommodations.

Rijo Walker, a former safety on the Cavalier football team, is a double ’Hoo after earning his master’s degree in athletic administration from the Curry School of Education and Human Development in 2016. In his third year at the College Football Playoff, his main task as team operations coordinator is creating the nearly 300-page participant manual that goes out to the four semifinalists.

Kiana Hairston, a former sprinter on the Cavalier track and field team, joined the College Football Playoff as the intern for team operations in August shortly after graduating from UVA.

With the start of the playoffs on Dec. 29 – and the national championship game set for Jan. 7 at Levi’s Stadium in California – UVA Today caught up with Doughty, Walker and Hairston.

Q. What aspect of the job do you enjoy most?

Doughty: My favorite part of the job is getting to work closely with managing all the behind-the-scenes elements of the selection committee. So many college football fans would die to get anywhere close to the committee room, and I get to have a front-row seat. I manage all the details of their meetings and work closely with committee members on their needs for travel, accommodations and anything else they need.

Working with people like [selection committee members] Condoleezza Rice, Ronnie Lott and even getting to become close friends with former Virginia Tech coach Frank Beamer – even being a UVA grad – has been a real highlight.

Walker: Student-athlete experience. Seeing ideas turn into renderings, and then into real-life art is special. But seeing the players’ expressions when they initially arrive at the airport and/or hotel is priceless. It makes the yearlong work worth it.

Hairston: I enjoy knowing that I’m creating a first-class experience for the student-athletes.

Q. After years of not having a single-elimination postseason tournament, how do you think fans are liking the College Football Playoff?

Walker: I think fans are excited about what the CFP is bringing to college football. It is an opportunity for the four best teams to decide who is the national champion. Growing analytics on social media and TV show that the brand is growing and people are locked in! The best part is that each week in the college football regular season is important, so fans are literally watching games that have playoff implications every week.

Doughty: Fans love it. ESPN has conducted surveys that say there’s an 80 percent approval. I don’t know many things that have an 80 percent approval rating, except maybe Bodos. We’ve seen an unbelievable amount of success, even more than we ever dreamed, and the momentum is continuing to grow.

Q. Is it pretty cool to be working with fellow ’Hoos?

Doughty: We always talk UVA sports or what restaurants and spots have come and gone and how UVA was different when I went there in the early 2000s and when someone like Kiana went to school – graduating in 2018.

Walker: We can relate to almost every aspect of our time at UVA, even though we all went there at different times. For all of us to be from the state of Virginia, we enjoy the nostalgia and memories of shared experiences. Texas is awesome, but there is nothing like the beaches in the Tidewater, history and bustle of Northern Virginia and the scenic mountains of Southwest Virginia.

Q. Any new aspects to the festivities this year that fans either attending or watching on television can enjoy?

Doughty: Every year brings some new elements, since we rotate cities [for the games]. We are adding a fan activation this year for fans traveling to the game called “The Quad,” which is designed to be the ultimate outdoor meeting place for fans, family and friends.

On TV, we are excited to have our second year of having a halftime performance. In addition to the marching bands, we will have a concert from Imagine Dragons that folks at home can enjoy.

Q. How did your time as a UVA student prepare you for what you are doing now?

Walker: Going to UVA taught me how to navigate the world around me. I learned from so many people while I was there. I learned soft skills that stick with me now. I intangibly received an education on the “how” (i.e. writing skills, listening skills, social skills, etc.) of various things. We operated at a high level at all times, so it’s just ingrained in us and is normal to us.

I truly believe that you can teach skills for a given job, but character is a piece that UVA seeks in undergraduates and develops, thus giving alumni a great launching point for the real world.

Doughty: People are always shocked to know I was a history major at UVA, because that doesn’t exactly translate to working in sports or customer service/hospitality. But, majoring in history taught me all sorts of real-world business skills, like oral and written communication skills, a detail-oriented approach, skills for working independently and an ability to meet deadlines in fast-paced environments – all translatable skills.

However, what prepared me most for what I’m doing now was working in the athletic department [in recruiting]. Working with the football and baseball programs gave me the real-world experience that anyone who wants to explore working in sports should have and led to great connections and relationships that I still have today.

Q. What have been your impressions of the UVA football team the last few years? Do you dream about seeing them in the College Football Playoff someday?

Doughty: It would of course be a dream come true to see UVA in the CFP one day. I’m really excited for the future and what Coach Mendenhall is building. It seems more than just a flash in the pan and a real lasting legacy that he is trying to build. Also, I’m a huge Bryce Perkins fan. Really excited to have him back next year!

Walker: Virginia is a team that is clearly progressing every year. We are on our way to being a big deal in the ACC. Until that time, I’ll continue to do mockups and renderings of various pieces using UVA logos and colors. I envision the CFP look and feel paired with the blue-and-orange V-Sabre and it gets me excited. So I think of the ’Hoos being in the national championship game a lot.

Hairston: To the credit of Coach Mendenhall and his staff, UVA football has truly brought about a new standard. With UVA being ranked in the College Football Playoff weekly rankings for the first time since the CFP’s inception in 2014, I think we’re heading in the right direction.

What’s Next for UVA’s Class of 2022? END_OF_DOCUMENT_TOKEN_TO_BE_REPLACED