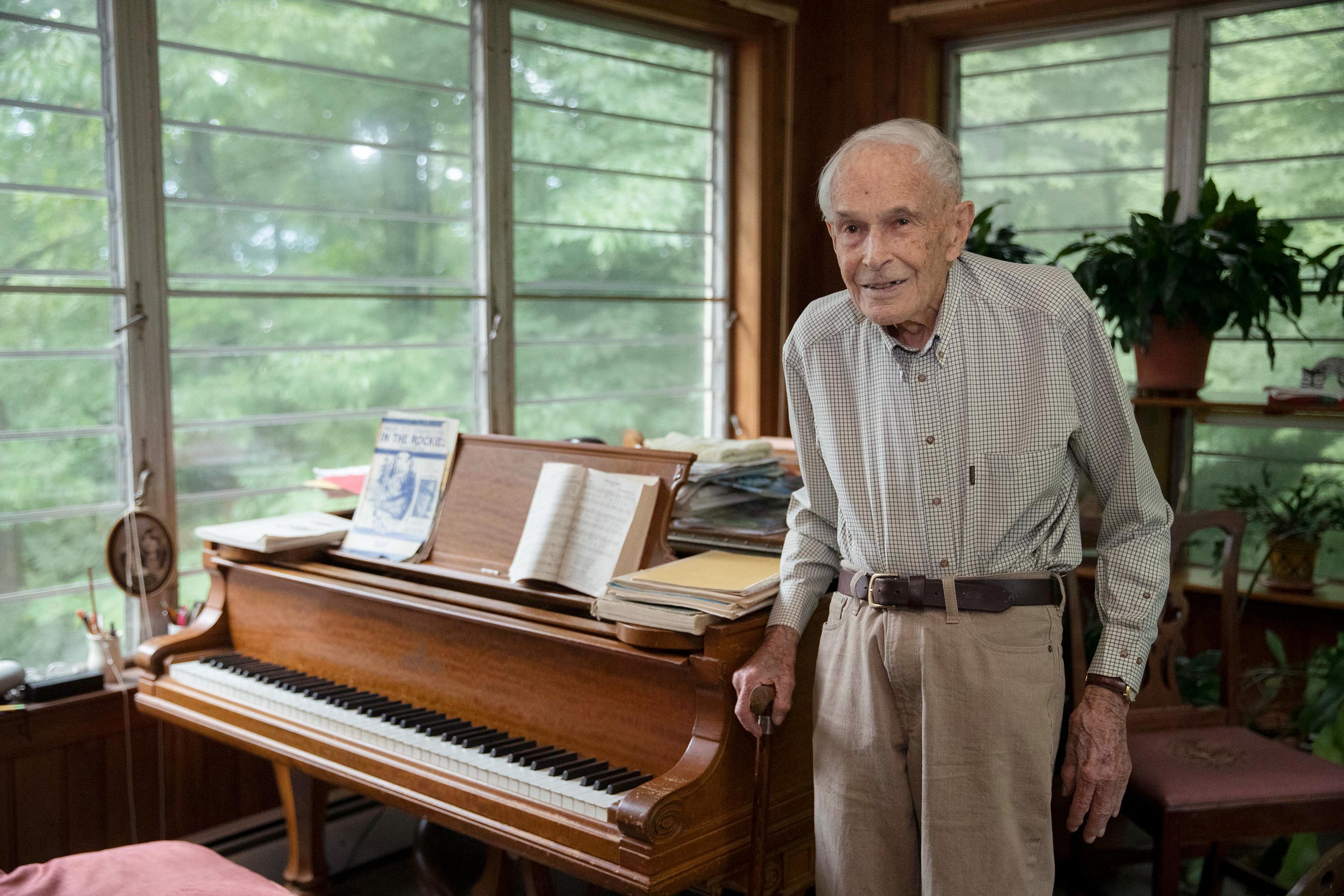 Thomas Crowell gives credit to diet and exercise for his longevity.

Crowell, a retired University of Virginia chemistry professor, turned 100 years old on July 9 at a party surrounded by members of his extended family.

“I have oatmeal every day,” he said, dressed in a tan-and-green checked shirt and khaki pants, sitting in a sunroom in his home surrounded by his daughters’ plants and his musical instruments. “I remember, long ago, I would stop in a cafeteria in New York City and I would have oatmeal, toast and coffee for 30 cents. A more likely reason for my longevity is exercise in old age.”

Crowell, who wears hiking boots all the time, even to church, walks almost daily in his neighborhood and remembers walking, as a younger man, the streets of New York City for exercise.

“I don’t sit still.” he said. “They say that just sitting is not good at all. In my work, when I was doing research at UVA, if someone would come in to talk with me, I would say, ‘Come in the lab’ then I worked while we talked.”

Crowell, who was raised in Caldwell, New Jersey, went to local schools and finally to the Putney School in Putney, Vermont, for two years where a good instructor in chemistry and math put him on his path.

“I wondered if I wanted to major in math, and I mistakenly thought the only jobs that would be available would be as an insurance actuarial, but that was my rather loose reasoning,” he said.

While he focused on chemistry as an undergraduate at Harvard University and later as a graduate student at Columbia University, Crowell also kept his hand in mathematics.

“While I was a graduate student at Columbia in chemistry, I was offered a very challenging job teaching math courses at Bard College, which is up the Hudson an hour or so,” Crowell said. “I would get on the train at 7 a.m. and teach math for two days before returning. That was a lot of fun, a good year.”

But chemistry had a tactile lure than mathematics lacked.

“I like to work with my hands and do the actual experiments,” Crowell said. 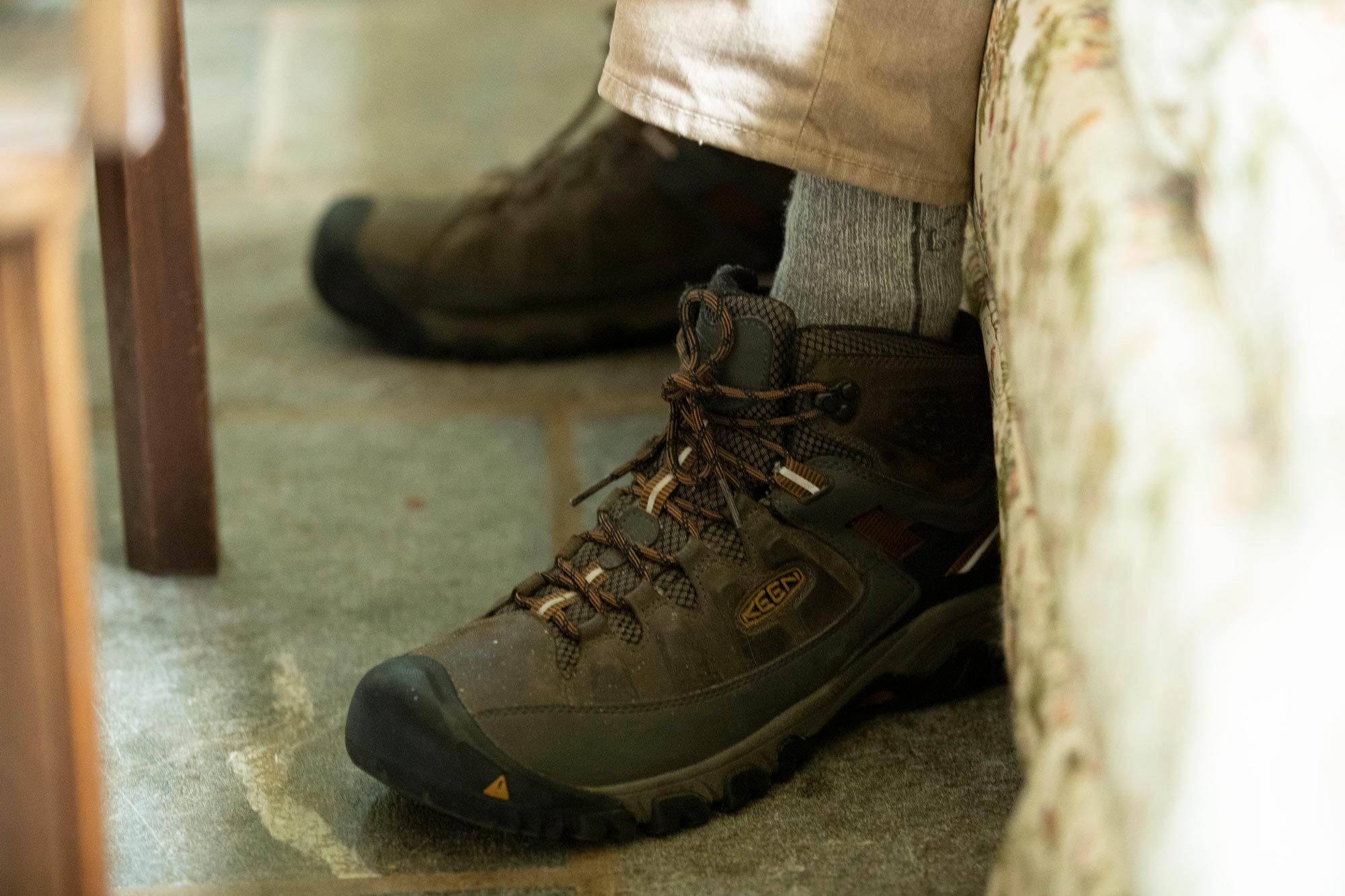 Crowell’s move toward chemistry carried him through interesting times, including, he said, work on the Manhattan Project, the top-secret U.S. government project to develop an atomic bomb during World War II. Like most of his classmates, he had graduated halfway through his senior year at Harvard, at which point he signed onto the Manhattan Project.

“My first task on the Manhattan Project was to go to the library at Columbia every day and copy down, by hand – there were no copiers in those days – every reference in the library to the chemical compound BF3, boron trifluoride. Boron is a low-molecular-weight element found in boric acid.

“I got very tired of that. It was a terrible job doing that. Now you could go to your computer, punch a button and out would come all the articles ever written on boron trifluoride, but there was no such thing then.”

Then Crowell shifted from the library to the laboratory, this one at Havemeyer Hall at Columbia University.

“They needed those boron compounds as part of the whole project,” Crowell said. “My job at first was to do a lot of work with that compound. The Manhattan Project, of course, was secret and so we didn’t talk about it. What we were doing we didn’t even know. There was a rumor that they were working on a bomb, which was true, but bombs were being dropped every day in England and I thought the point was to release large amounts of power, which was an understatement. I thought maybe that power might be used for Army trucks.

“We had no idea of the terrible consequences of what we were doing until the actual attack on Hiroshima came out in the paper. That was a complete shocker.”

After the war, Crowell attended an American Chemical Society conference in Chicago, where many jobs were advertised. At the conference he met Bob Lutz, who taught organic chemistry at UVA. Lutz suggested Crowell interview for an opening at UVA and chemistry chair Arthur F. Benton hired him.

“My doctoral research had been in the field of physical organic chemistry, and was completely different from my work on the project.” Crowell said. “My specialty was measuring the reaction rate, kinetics, which means you mix up a couple of chemicals and you stand with your stopwatch or your calendar and see how long they take to react and see what is the exact mathematical formula for the rate of change.”

The chemistry department was housed in Cobb Hall and Crowell set up a lab for himself where he could blow glass for scientific insturments, and he started teaching courses in physical organic chemistry and organic structure.

William L. Duren Jr., the dean of the college, appointed Crowell chair of the department in 1955, even though he was one of the junior chemistry professors.

As chair, Crowell held the key to the stock room where chemicals were stored.

“One day someone called me up and said there was liquid coming out from under the stock room door,” he said. “It was coming from some bottles of concentrated hydrogen peroxide, and they can blow up if they are not properly vented for the escape of oxygen. So, with the help of a graduate student, who wrapped himself in canvas, we went in and we pulled out these boxes of hydrogen peroxide. That part of being chairman I really enjoyed.”

What he enjoyed less were the academic politics, people angling for positions and seeking favors.

“Someone even came to my home one evening to try and get his person promoted,” Crowell said.

Crowell, who retired in 1984, increased the department’s research and appointed new faculty members in physical chemistry.

“Dean Duren, after my five-year term was up, thanked me for my efforts to keep the department together, actually it was due to the efforts of many young instructors,” Crowell said.

In the classroom, Crowell taught the importance of small things.

“I tried to teach them to keep their eyes open,” he said. “If you have an unexpected result, don’t throw it away, because probably there is some clue there. Don’t neglect small clues and watch for unexpected results.”

Crowell’s life was not limited to chemistry. After he came to UVA, he met and married a nursing student, Mary M. Wheat, and they shared a life and a love of music.

“When Mary and I were first married and I was a young professor at UVA, the music department was in Minor Hall,” he said. “I would climb up on the masonry of the great big window of Minor Hall, push the window open and climb in. I would go around to the locked door and let Mary in so we could play four-hand piano.”

“Music runs all through my narrative,” Crowell said. “Half of the pleasure and drive in my life has been music, in particular playing the French horn.

“In my junior year in college, the opportunity opened up to play in a large orchestra conducted by Arthur Fiedler – not the old Arthur Fiedler you may have seen with a white beard, but a young, vigorous man about 40.” 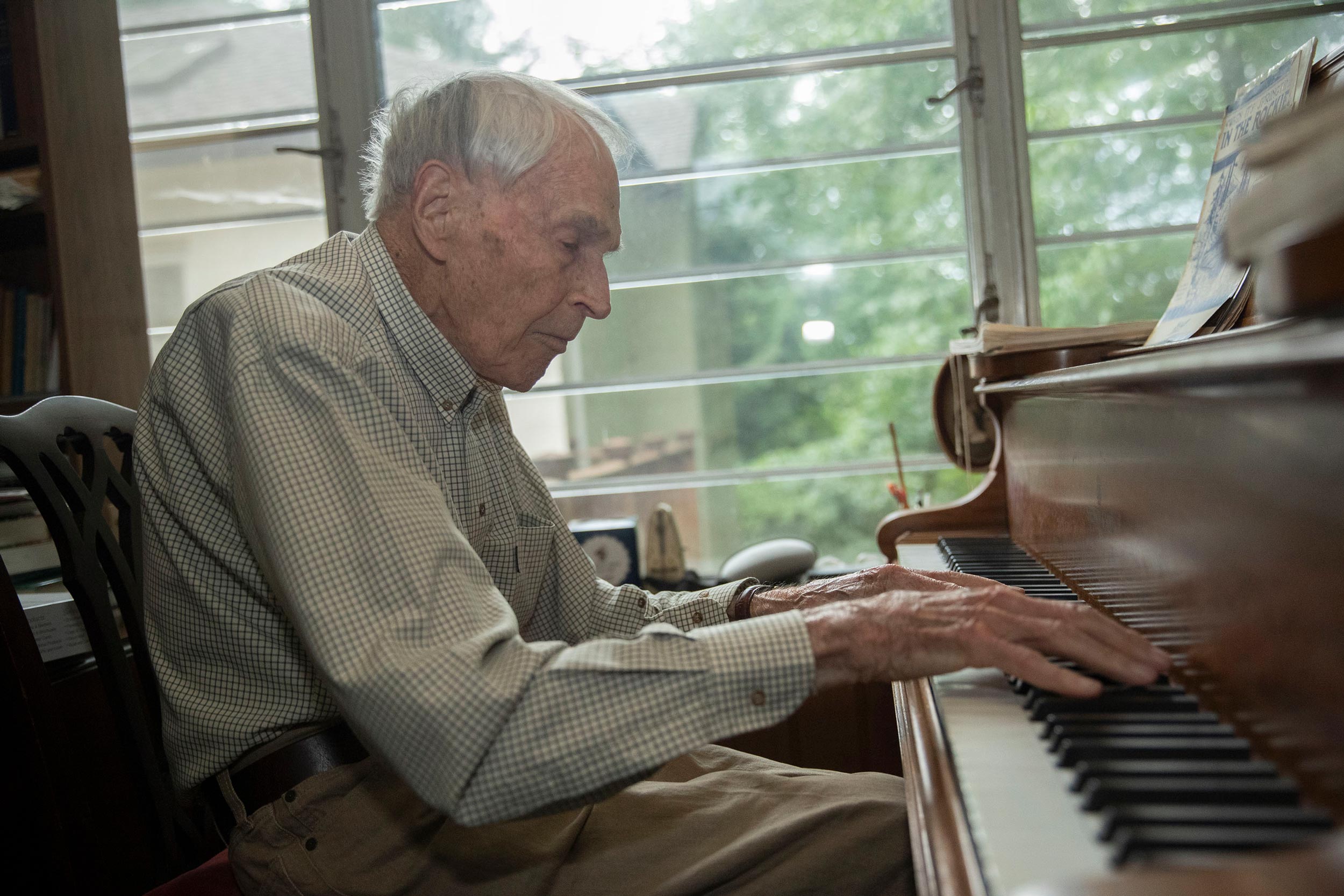 “I took piano lessons in the 1920s and learned to play the piano somewhat and to sight-read music pretty well,” he said. “One year I accompanied the University Singers.

“I now have a chance to practice the piano. I play miserably, but without much vision, I have memorized a couple of the preludes and fugues for Bach’s The Well-Tempered Klavier. I get a kick out of it, even with my fingers hurting and starting to not do what I want. Even with that, I feel the effect of practice. When I practice, I can play better.”

Crowell also enjoys books, but macular degeneration has forced him to use a large magnifier.

And he is trying to broaden his grasp of languages, having studied Spanish and reading some in French and German.

“I do read a little,” he said. “For a while I was reading a lot of history. My daughters read to me every day.”

Crowell keeps busy with his daily routines of exercise and music, because staying active keeps him young.

“The years go by, and unless you plan your time, time just passes,” Crowell said.

Netflix to Add Ads. Why This Could Be a ‘Game-Changer’ for Your Viewing Experience END_OF_DOCUMENT_TOKEN_TO_BE_REPLACED

What’s Next for UVA’s Class of 2022? END_OF_DOCUMENT_TOKEN_TO_BE_REPLACED