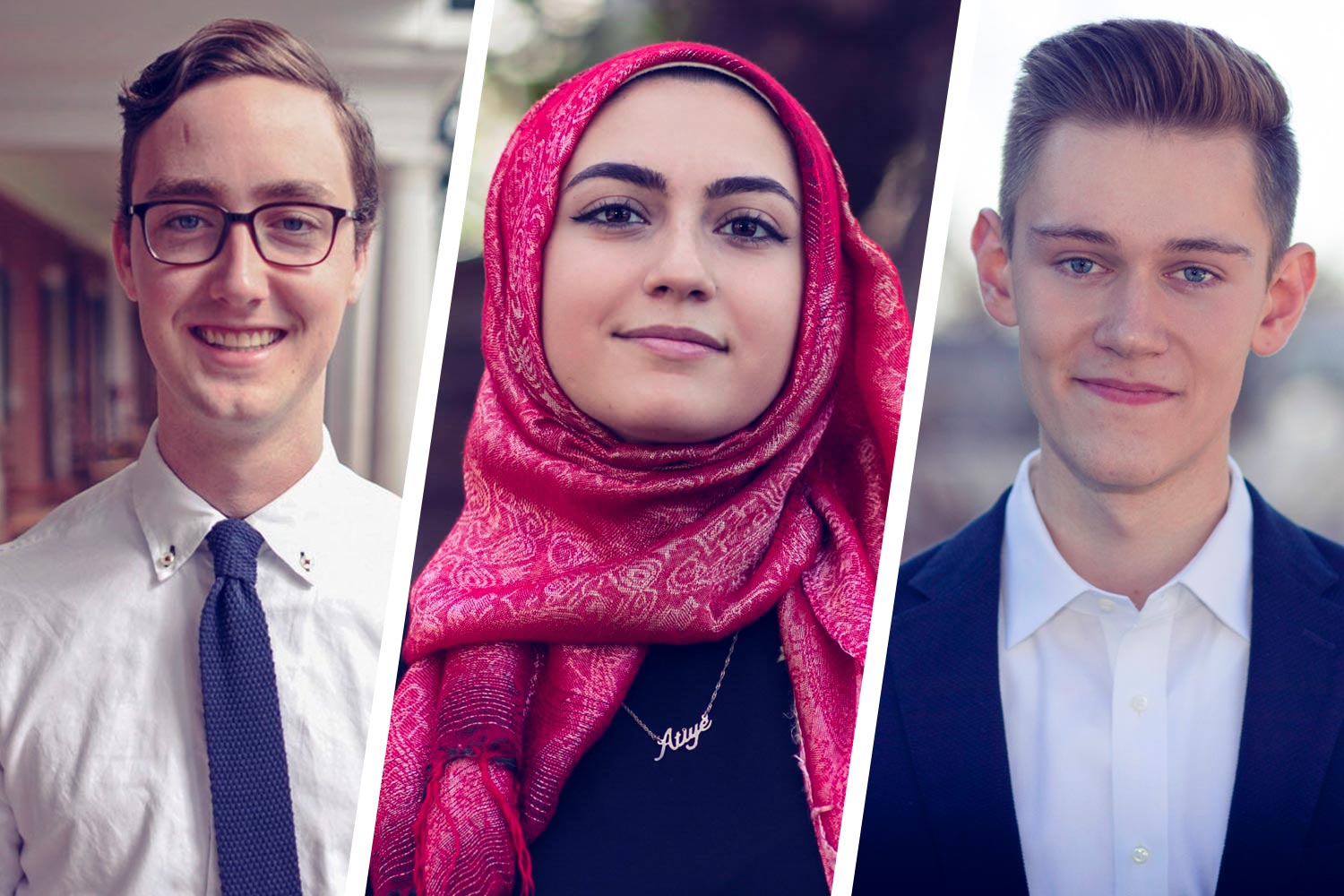 Three University of Virginia scholars – all with ties to the University’s political and social thought program – have earned Marshall Scholarships, paying their way for graduate study in the United Kingdom.

Marshall Scholarships, which finance American students studying in the United Kingdom, cover university fees, cost-of-living expenses, annual book grants, thesis grants, research and daily travel grants, as well as fares to and from the United States. Regional committees of British consular personnel and former Marshall Scholars select up to 40 scholars each year to study at graduate level at a United Kingdom institution in any field of study. The scholarships are largely funded by the British government. There are 43 scholars in this year’s class, making it the largest Marshall Scholars class since 2007.

Nenon, a Charlotte, North Carolina native, is currently living in Kampala, Uganda as the monitoring and evaluation officer for Global Grassroots, a non-governmental organization that seeks to empower women and girls.

He said the scholarship will allow him to build on his current work in East Africa. “I am interested in making humanitarian assistance more effective at the local level, since I work with grassroots organizations in Uganda, Rwanda and South Sudan that use limited resources very effectively,” he said. “But the humanitarian system struggles to include conflict-affected people as partners, and I want to understand how policymakers in the U.S. and the U.K. can create more collaborative responses to humanitarian crises.”

Nenon, a former Lawn resident, was a founder of TEDxUVA, a senior counselor for the University Judiciary Committee and a member of the Raven Society. A Jefferson Scholar and an Echols Scholar, Nenon received numerous research grants for his work in East Africa, including two Jefferson Public Citizens grants to study gender equity programs in Tanzania, Rwanda and Uganda, and funding from UVA’s Entrepreneurship Cup to pilot a distance-learning technology for Congolese refugees in Rwanda. He also interned at the International Rescue Committee in New York City.

A 2012 graduate of Myers Park High School, Nenon said he ultimately wants to make humanitarian assistance a more effective tool of American foreign policy, hopefully while working at a think tank or in the State Department.

“He possesses an adroit mind with a real flair for social and political theory, and he combines this with a mature capacity for effective leadership and institution-building,” Smith said. “I can say with confidence that Porter is a genuinely outstanding student who will bring great credit to all of us who have been privileged to help him on his way.”

“Porter is a sharp-eyed critic and enviably imaginative,” said Maurice Wallace, associate professor in the Department of English. “His sensitivities to the wisdom and craft of the literary enterprise are expert. Easy-going, generous toward others, a clear intellectual leader, Porter has ‘the gift.’”

Gretchen Ki Steidle, a UVA alumna and founder and president of Global Grassroots, said she appreciates Nenon’s abilities, including his humility.

“Porter is intelligent, resourceful, has a great capacity for creative and innovative problem-solving, can manage complex undertakings, has a very strong attention to detail, is passionate about learning and making a positive impact, and follows through with his commitments,” she said. “And as a strong leader, Porter also has a gentle humility that encourages more junior staff to develop their potential and makes him a joy with whom to work. He possesses cultural sensitivity and a passionate desire to contribute, as evidenced in his work in the U.S. and overseas with war survivors, refugees and undereducated communities.”

Latif, of Hagerstown, Maryland, is a social activist and an advocate for the legal rights of Muslim women. She received the 2017 John T. Casteen III Diversity-Equity-Inclusion Leadership Award, organized UVA’s “Eliminate the Hate” campaign, spearheaded events such as a teach-in to educate faculty members on the experiences of minority students, and chaired the Minority Rights Coalition. She helped organize rallies supporting Muslim, immigrant and international student rights in response to President Trump’s efforts to block travelers from seven countries from entering the United States.

She said the United Kingdom currently offers her many advantages. “I was really interested in the prospect of studying in a country with such high rates of immigration and such high rates of violence against migrant women,” she said. “I was also passionate about the idea of studying at places with such excellent resources, such as University of Edinburgh or Oxford.”

A Lawn resident, Latif has received a Harry S. Truman Foundation Scholarship, a Jefferson Scholarship and the Silver Award from UVA’s Chapter of Senoritas Latinas Unidad Sorority Inc., which recognizes excellence in advocacy and efforts toward inclusion for marginalized students on Grounds.

Latif is student director of the Multicultural Student Center, represents the College of Arts & Sciences on UVA’s Honor Committee and is a member of the Raven Society. She also serves on the Advisory Committee on the Historic Landscape of the University, convened under the leadership of professor Claudrena Harold and UVA President Emeritus John T. Casteen III. A Meriwether Lewis Fellow, she received a Harrison Undergraduate Research Grant and has conducted research on the intersectional experiences of Muslim women and best legal advocacy practices by non-governmental organizations. She served as an ambassador for the Middle Eastern Leadership Council, the public relations and marketing director of PULSE, and a Sustained Dialogue moderator. She writes regularly for the Huffington Post.

An intern at Karamah, a non-governmental organization for Muslim women that advocates for human rights, Latif has conducted research on female genital mutilation in the United States, the incidence of hate crimes against Muslim women in the U.S. and the legal precedent for religious apparel in schools. She also interned at UVA’s Center for Politics, with the “Kerning Cultures” podcast about the Middle East, and with the Institute for Practical Ethics and Public Life.

Latif brought the annual World Hijab Day to UVA in her first year on Grounds to educate her fellow students about Muslim women’s experiences with prejudice and violence. She gave a TEDx talk on challenging expectations and stereotypes of Muslim women and discussing Muslim women’s historical and politicized relationship with the hijab, a head covering worn by Muslim women.

Barbara Ruddy, director of human resources at the UVA School of Law, said Latif is dedicated to serving others.

“Attiya Latif is singularly dedicated to being in service to others around the world,” Ruddy said. “Attiya has worked tirelessly to promote understanding and peace not simply through her efforts, but by virtue of the personal example she offers each and every day. Attiya is both a beacon of hope and leader of change – change designed to improve the lives of those around her, particularly those who are marginalized by virtue of their gender and their faith.

“Rarely have I met a student of the caliber of Attiya Latif,” Ruddy said. “She exemplifies what is best about not only students at the University of Virginia, but about students and young people across the country. She is spirited, she is talented and she is singularly focused on service to others.”

Kim Forde-Mazrui, Mortimer M. Caplin Professor of Law, describes Latif as the most impressive student leader he had ever met.

“Attiya’s leadership in service of inclusion, diversity and equity manifests in so many forms that it is difficult to describe her leadership succinctly,” he said. “She engages in public speaking and advocacy; writing periodical articles and grant applications; producing video, radio and podcast programs; collaborating; organizing; mobilizing; training and mentoring. She does so, moreover, while excelling in her studies. She has a special quality, an inner force and light, which is difficult to capture in words.”

“Attiya is wise beyond her years and combines a generous supply of pragmatic wisdom with visionary perspectives,” Milani said. “She holds certain principles non-negotiable, and at the same time is flexible and tolerant. She is eloquent and articulate, yet eager to listen and learn. She is confident, yet unassuming and kind. She is interested in building bridges rather than erecting walls of separation.”

Chellman, who is in the area program in literary prose within the English major, is writing his political and social thought thesis on the relationship between James Joyce’s book, “Finnegans Wake,” and Ireland’s modern understanding of national identity.

He said he sees advantages to studying in the United Kingdom at this moment in history. “Studying in the U.K. would be particularly relevant for my interest in political divisions,” he said. “The post-Brexit political debates in the U.K. have a lot to teach Americans about how we should engage in constructive conversations.”

Chellman said he wants to combine his interests in literature with his appreciation of politics.

“I hope to be a journalist focusing on long-form content that uses narrative to address political divisions in the United States and United Kingdom,” he said. “I’m committed to building bridges between divided communities, and I believe literary journalism has a unique ability to develop empathy in an age of political polarization.

“My studies of journalism and discourse analysis through the Marshall Scholarship will make my future writing more effective. At Royal Holloway, I’ll be studying the world of new political communication and how we can use writing to change people’s opinions in an age of increasing polarization. At Essex, I’ll study the politicization of identity politics and learn to write about social identities in a productive and unifying way.”

He is co-founder and editor-in-chief of Q* Anthology of Queer Culture; former president of the Queer Student Union; former president of the Jefferson Literary and Debating Society; founder and director of the Jefferson Society Archives Project, which seeks to organize and digitize the archival collection of UVA’s oldest student group; and vice chair of the “Unpacking Privilege” training program for the Minority Rights Coalition, running the organization’s multicultural training program.

He has been a volunteer for Madison House and UVA’s LGBTQ Center. He has been a contributing writer to the Cavalier Daily student newspaper and to the Huffington Post, as well as a press intern for U.S. Sen. Mark Warner of Virginia.

Smith also praised Chellman for his scholarship and efforts as a student leader.

“Jack Chellman has managed to combine extracurricular commitments involving considerable time and leadership with consistently solid academic performance in all of his quite rigorous classes,” Smith said. “He is genuinely devoted to learning both the substance and the craft of writing about, and directly working on, issues of importance.”

Michael Levenson, William B. Christian Professor of English, said he is impressed with several facets of Chellman’s personality.

“In all of my encounters with Jack Chellman, I saw confirmation of his intellectual brilliance, his strong and sensitive leadership, his abiding kindness, his curiosity, his intellectual intensity and his unending care to turn his talents to the help of others,” Levenson said. “The meeting of such exemplary moral character with such exhilarating intelligence will contribute mightily both to his success and to the success of any community that surrounds him.”

It’s Copperhead Season in Virginia. Here Is What You Need to Know END_OF_DOCUMENT_TOKEN_TO_BE_REPLACED

What’s Next for UVA’s Class of 2022? END_OF_DOCUMENT_TOKEN_TO_BE_REPLACED