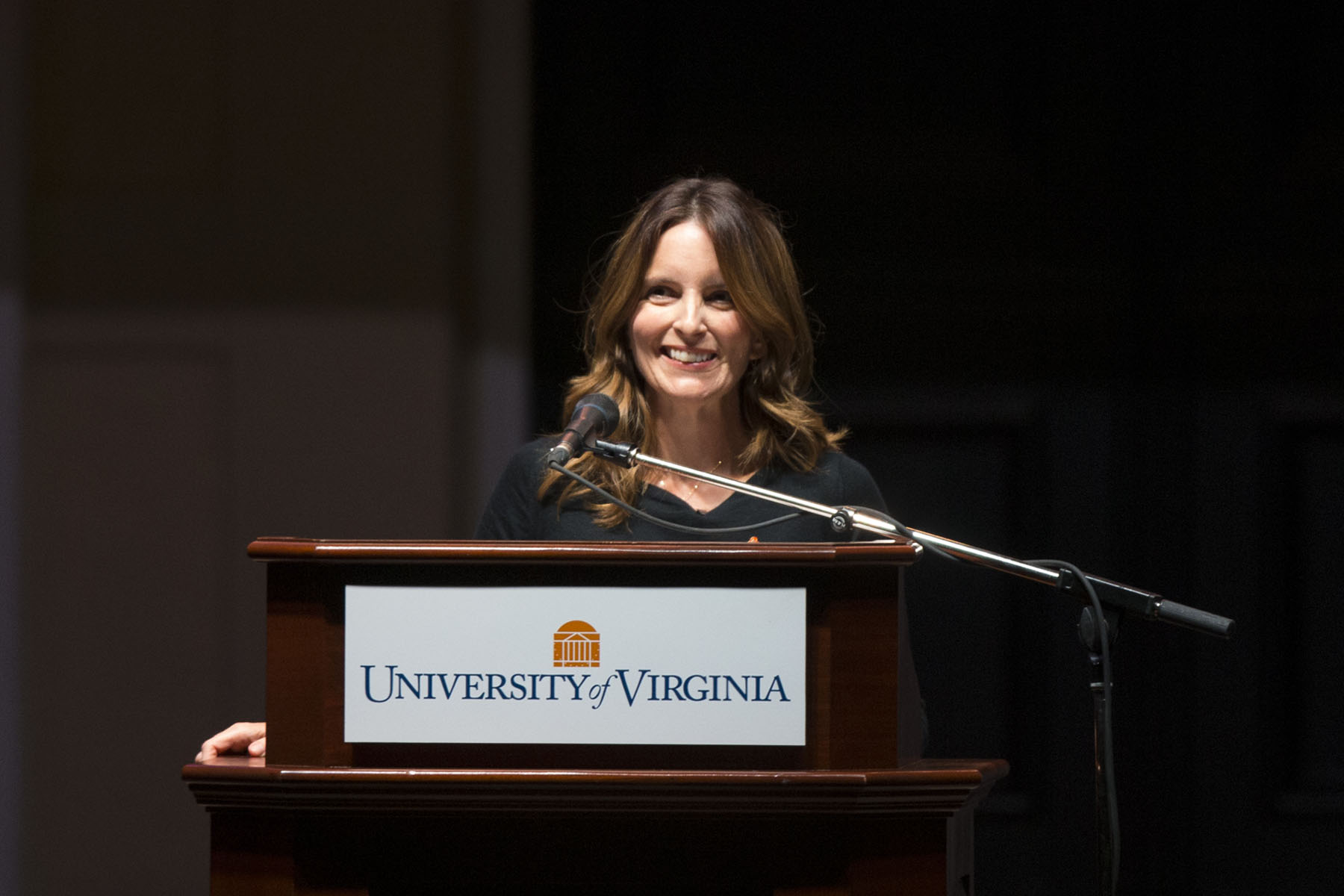 “When you are scheduled to speak right before the funniest woman on the planet, there’s just one rule: Be brief, “ University of Virginia President Teresa Sullivan told a packed audience at the McIntire Amphitheatre Saturday night.

She was introducing U.Va. alumna Tina Fey, the actress, comedian, writer, producer and star of NBC’s “30 Rock” and “Saturday Night Live,” who returned to Grounds Saturday to kick off the President’s Speaker Series for the Arts, a series highlighting the positive impact of arts on society.

During her time at U.Va., Fey studied playwriting and acting. She graduated from the College of Arts & Sciences in 1992 with a bachelor’s degree in drama.

Fey opened her speech by acknowledging that “the arts” embody an array of disciplines. She discussed her early exposure to different fields in art: dabbling in painting – “When I was in second grade, I won an art contest for my reimaging of the cover art for ‘Babar Comes to America,’” she said, referring to a popular children’s cartoon book. “If you asked me to repaint that painting today, it would come out the same, maybe a little worse.” She also recounted playing the flute, where “I got as far as learning to play ‘The Hustle,’ then got lightheaded and had to retire,” and reenacted her adolescent dancing skills, which she dubbed “Frankenstein arms.”

Fey found her place in high school theater. As a senior, she starred as Van Helsing in “Dracula,” a part normally played by a man. “But that was the least of our problems,” she joked. She recounted how during the performance, the play went from bad to worse, with parts of the set catching on fire and the tech person making multiple appearances on stage. At the culmination of a killing scene, she looked up to see a 2-year-old girl who had wandered onto the stage, laughing at her.

“By the time I arrived in U.Va. for my first year in 1940,” she joked, “I had decided … it was time to study something more serious and profitable, like English. But then I auditioned for a First Year Players production of ‘Godspell,’ and it really changed my life,” she said, receiving loud cheers from the audience.

The show pulled her to the drama department, where she played small roles as “a maid who moves chairs around in ‘Amadeus,’ and as a chicken carrier in ‘Much Ado about Nothing.’” But she ended her U.Va. acting career playing Sally Boles, a leading role in Christopher Isherwood’s “Cabaret.”

Around the same time, Fey wrote her first short play in a playwriting class at U.Va.

“It was just a slight little one-act comedy about a bunch of friends going back to their hometown for another friend’s wedding,” she said. “But I sat there in the Helms Theater, watching the play from outside, and the play got laughs. It was so fulfilling to me in a way that acting never was.

“I thought, ‘Oh, that’s what I’m supposed to do. That’s the best use of me. I’m supposed to try to write things to make people laugh,’” she said. She shifted her education focus to writing comedy.

Three artists have inspired her throughout her career, she said.

She first described the thought-provoking work of British feminist playwright Caryl Churchill, known for challenging race and gender stereotypes in her works. Fey mentioned “Cloud Nine,” a farce told through the story of a British colonial family in Africa, which contains opposite gender and race casting: the mother of the family is played by a man; a young son is played by a grown women; and an African slave is played by a white man.

“She inspires me to write politically, to write about something, to write about things that are important,” Fey said. She mentioned her 2004 movie “Mean Girls,” a comedy about aggression among high school girls, and her work in the hit TV-show “30 Rock,” which she wrote and starred in.

“‘30 Rock,’ when it wasn’t being ridiculous, was intended to be at its core about the gender, race and class difference between Liz, Jack and Tracy,” Fey said. “We wanted to hear, ‘How is Liz treated differently in the business world than Jack? How is Jack’s privileged world shattered when he gets bedbugs? Is Tracy refusing to accept the link between food and diabetes?’”

She laughed, and added: “I remember Tracy said, ‘There is no link between food and diabetes. It’s a white myth, like Larry Bird or Colorado.’”

Comedian Chris Rock was Fey’s second major influence. “I think Chris Rock is the greatest standup comedian of his generation, of my generation,” she said. “He is someone who can look at the world really, really closely, notice something true that has never been said before, and then say it. That’s the best way to write a joke – because ‘only the truth is funny’ is what we were always told in improv class.”

The third artist in Fey’s “completely organic triumvirate of my favorite people” was composer and lyricist Stephen Sondheim. “A friend and I used to watch [Sondheim’s] ‘Into the Woods’ every Friday night, as part of an abstinence program that we accidentally founded,” she joked.

Sondheim’s work, which is known for setting beautiful music in creepy stories, inspired Fey to set high standards for her work, challenge the minds of the audience and create complete and finished pieces.

“We tried to exercise that kind of care at ‘30 Rock,’” she said. “… It doesn't matter if it’s a school play or a dumb TV show, it’s your work. You should care about it so much that people get annoyed with you.

“You can’t set out to try to make something super-commercial that everyone will like. That’s like a recipe for cream of wheat,” she continued.

“Don't chase money. I don’t always know the way to judge art, but I know you can’t judge art by whether or not it made money.”

Fey closed her speech recalling her performances as vice presidential candidate Sarah Palin on “Saturday Night Live.” Her later performances as Palin were spurred by viewer demand, although she was no longer employed by the show in the weeks preceding the 2008 election.

“We didn’t set out to influence the election,” Fey said. “Like we were talking about, jokes can only validate something that people were already thinking about.

“I’m at peace that my career will eventually just be me dressing up like Sarah Palin saying ‘maverick’ at supermarket openings and bat mitzvahs,” she added. “I’m fine with that.”

After her address, drama professor Robert Chapel joined Fey for a Q&A session.

Fey’s appearance reflects a strengthened emphasis on arts and their importance in the community. For U.Va., it’s a resurgence already symbolized by the opening of the new Ruth Caplin Theatre, the dedication of the Betsy and John Casteen Arts Grounds and the January appointment of Jody Kielbasa to serve as vice provost for the arts.

“The value of free expression in the experience of music, dance, film, visual art, writing and even fashion impacts people from every walk of life, from software developers to scientists, surgeons to statisticians, and yes, even politicians in their works and beyond,” Kiebasa said in his opening remarks. “Here at U.Va., the arts serve as one of our strongest bridges to the community of Charlottesville and the commonwealth of Virginia.”

The President’s Speaker Series for the Arts is also supported by the Vice Provost for the Arts and the Joseph and Robert Cornell Memorial Foundation.

What’s Next for UVA’s Class of 2022? END_OF_DOCUMENT_TOKEN_TO_BE_REPLACED