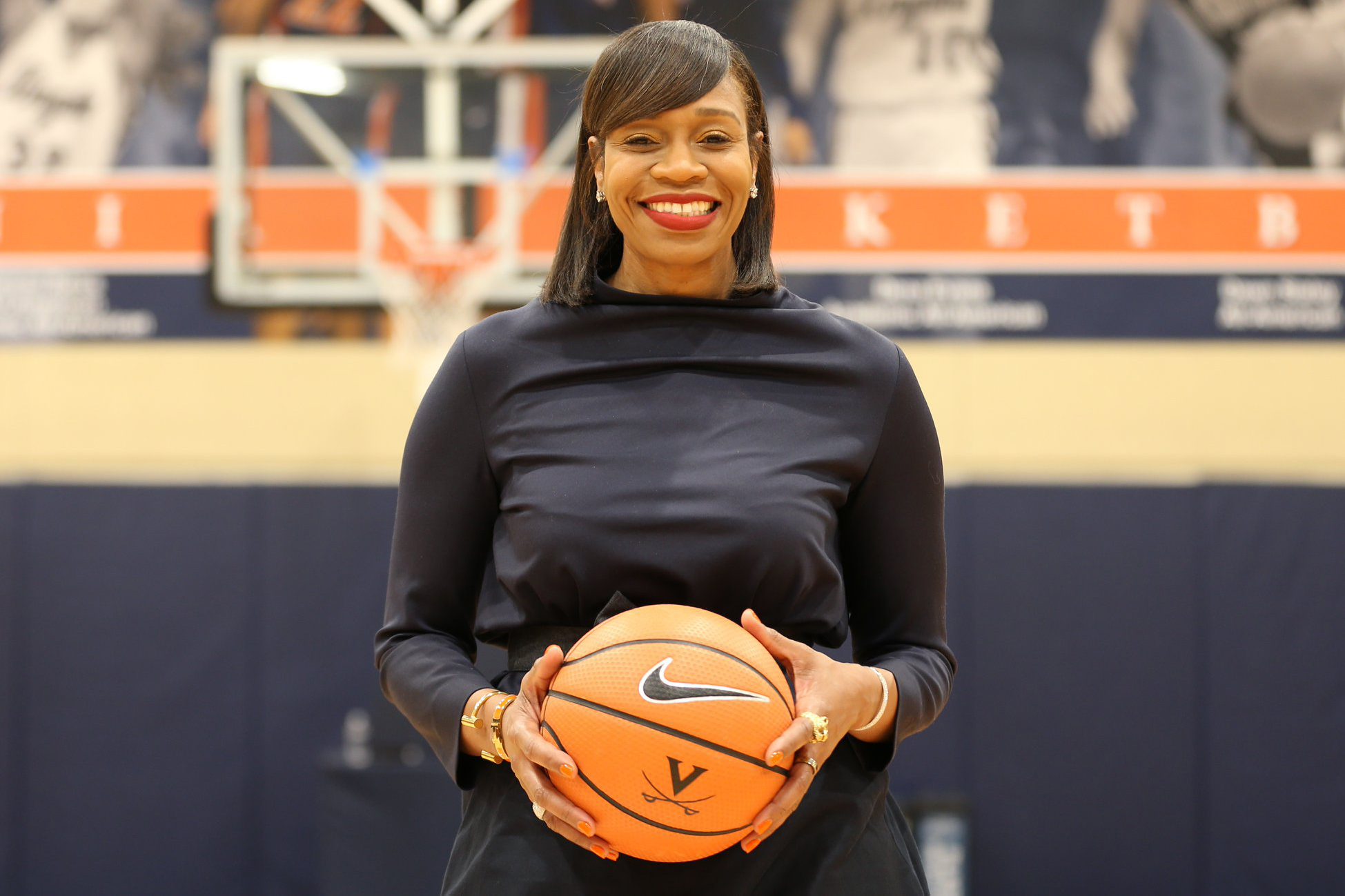 Van Chancellor was home in Katy, Texas, enjoying retirement, when he saw on ESPN’s news ticker Monday that the University of Virginia had hired Tina Thompson as its head women’s basketball coach.

“I immediately told my wife, Betty, ‘That is the perfect fit,’” Chancellor recalled Tuesday.

Chancellor coached Thompson on the Houston Comets, which won four WNBA titles in Thompson’s 12 seasons with the team, as well as on the United States team that captured the gold medal at the 2004 Olympic Games in Athens, Greece. (Thompson also helped the U.S. win Olympic gold in 2008).

Thompson, 43, was introduced Wednesday afternoon at a press conference at John Paul Jones Arena. She succeeds Joanne Boyle, who after seven seasons as the Cavaliers’ head coach retired last month to focus on a family matter. 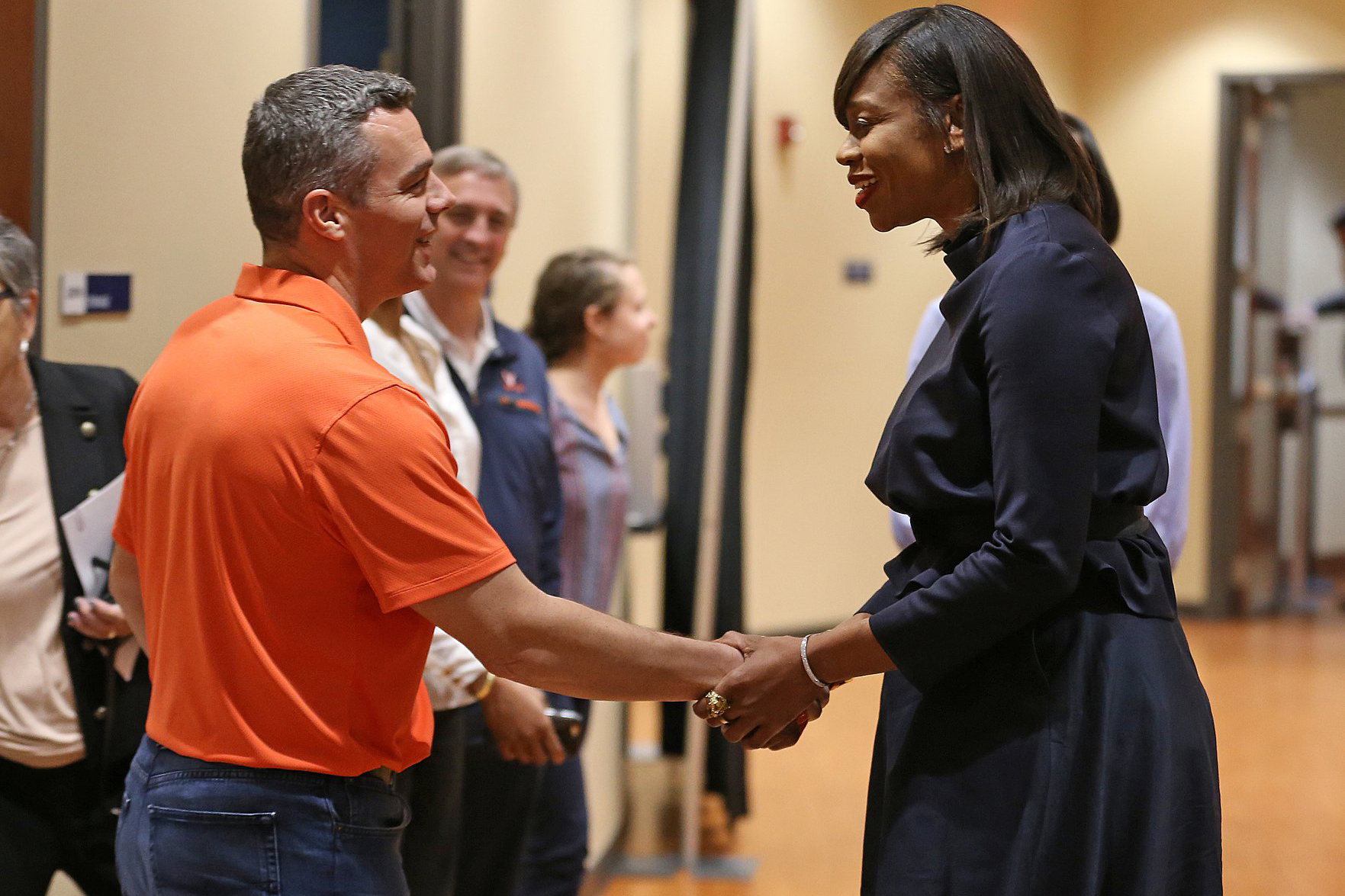 The past few days have been a whirlwind for Thompson, a graduate of the University of Southern California who’ll be inducted into the Naismith Memorial Basketball Hall of Fame in September.

After flying back to Charlottesville on Tuesday, Thompson met with UVA’s returning players that afternoon at JPJ.

“It went great,” Thompson said. “They were a little quiet at first, so I had to initiate the conversation a little bit, but they warmed up once I told them what my vision was, and not only what I expected of them, but how I was all in in helping them get there, that we were going to build a foundation of trust and communication, and that it takes time.

Thompson’s playing career ended in 2013, and she left the WNBA as its all-time leading scorer (7,488 points), though that total was later surpassed by Diana Taurasi.

This will be her first experience as a head coach, but that doesn’t concern one of her predecessors at UVA, Debbie Ryan.

Ryan coached against Thompson twice. When Thompson was a freshman on a team whose seniors included Lisa Leslie, USC ousted UVA 85-66 in a Mideast Region semifinal on March 24, 1994 in Fayetteville, Arkansas.

As a player, Ryan said, the 6-2 Thompson “was such a force. We’re not talking just a post player, we’re talking a force. She owned the paint. If you went in there, you dealt with her. That was it.

“She was ultra-competitive. She had to be a very hard-working player, because she made herself just so dominant.”

Ryan, who was inducted into the Women’s Basketball Hall of Fame in 2008, guided the Wahoos to three Final Fours in her 34 seasons as their head coach. She texted Thompson this week to offer her support, as did Boyle and UVA men’s coach Tony Bennett.

Elsewhere in the basketball world, many of the sport’s biggest names, including former UVA great Dawn Staley, now the head coach at the University of South Carolina, applauded Thompson’s hire.

“I think it’s a steal for Virginia,” said former USC coach Cynthia Cooper-Dyke, who played with Thompson on the Houston Comets.

“She is an absolutely incredible person, first and foremost, she’s a hard worker, and her knowledge of women’s basketball is so immense,” said Cooper-Dyke, who like Thompson starred at USC. “She’s a great teacher of the game, a hard worker and quick learner. She’ll be a great mentor for the young women who become part of her program at Virginia.”

There will be challenges for Thompson in her new role, but Cooper-Dyke’s faith in her friend is immense.

“If I were to vote for anybody to be put in that position, it would be Tina Thompson,” Cooper-Dyke said.

Thompson, who grew up in Los Angeles, knows she has much less coaching experience than most of her counterparts in the women’s game.

“I don’t really have any fear about that,” she said, “because I’m very aware that there’s a learning curve and through the process I’m going to make mistakes. I don’t step into this position feeling as if I know everything. I don’t approach anything in that way. In my opinion, when you do that, you have immediately stifled yourself.” 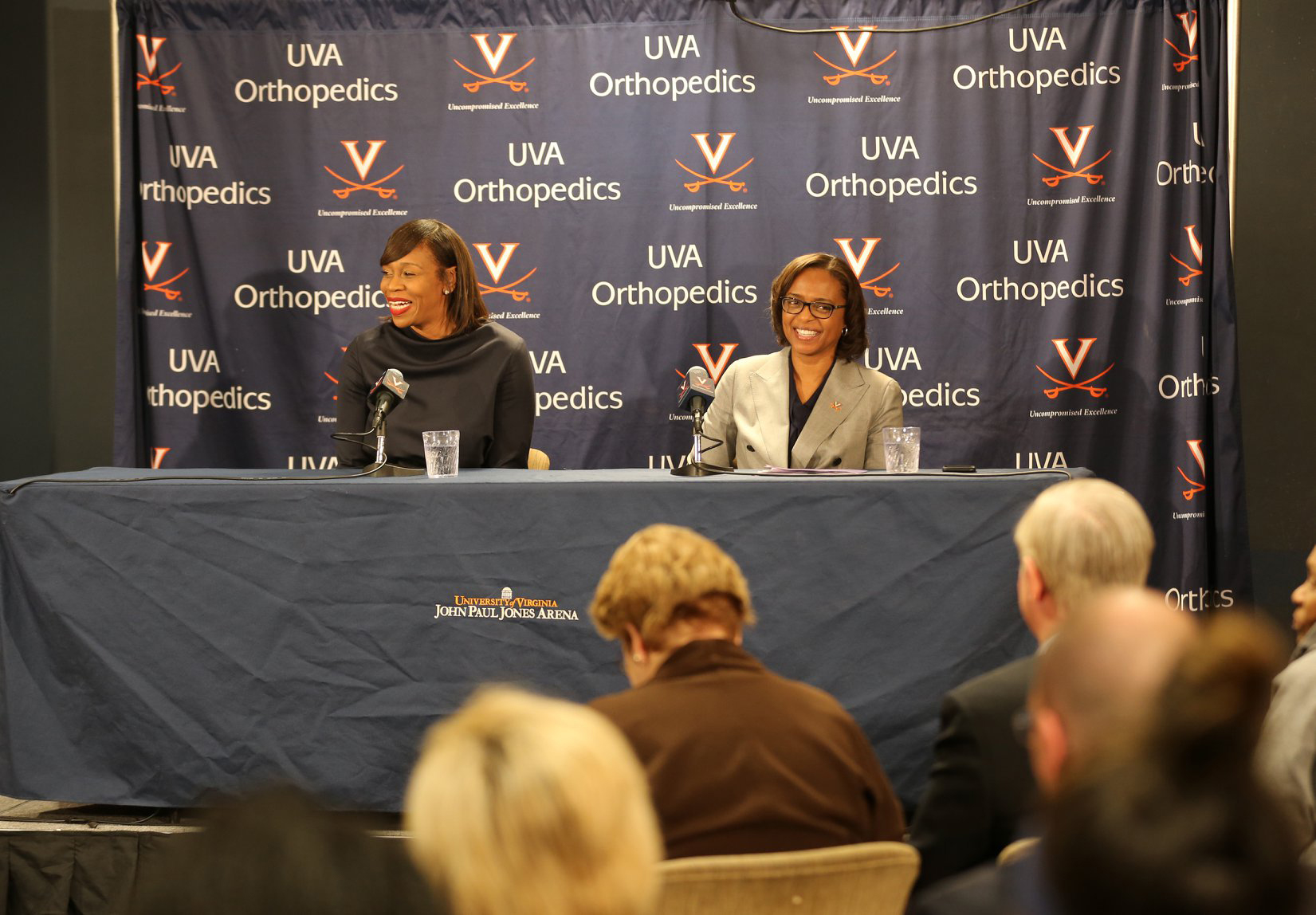 Her attitude, Thompson said, is that “every day is a learning process. Every day you’re going to be put in a situation where you can learn something, whether it’s what you should do, how you should do it better, or what you shouldn’t do. But there isn’t an experience that I’m going to face that I can’t learn from. And I’m going to be open to suggestions. I’m excited about the fact that Coach Ryan is open to having conversations with me and wants to give me the knowledge that she has.”

Her vision for the program?

Chancellor, who coached at the University of Mississippi and Louisiana State University as well as in the WNBA, said he thought Thompson might become a lawyer once her playing career ended. That was a possibility, Thompson acknowledged.

“I planned to go back to school,” she said. “I always had aspirations of being a lawyer and eventually a judge. That was my goal before the WNBA.”

When she retired as a player, Thompson expected to start working as a TV commentator. But when Aston invited her to join the coaching staff at Texas, Thompson couldn’t pass up the opportunity. It soon became apparent that she was a natural.

“A lot of superstars are not that hard workers when they become coaches,” Chancellor said. “But when I checked on her when she was an assistant at Texas, my friends would tell me how hard she would work in summer recruiting.”

In a statement released Tuesday, Aston said, “I am so thrilled and proud, not only for her, but for women’s basketball, that Virginia had the vision to hire Tina. I am thankful that she took a chance on Texas and was able to grow as a coach here. Tina impacted our program in many ways, but, most importantly, she helped a lot of young women see the future in a positive light.”

In Thompson’s three seasons on Aston’s staff, the Longhorns went 84-21. Thompson established herself as an effective recruiter almost immediately.

“That was easy. I just told the truth,” Thompson said. “That was one of the things I was very adamant about before I took the job. I will never tell a kid or a family anything that I don’t know or believe to be true. In my opinion, it’s very difficult when you create a scenario you can’t live up to.

“I always told them the truth. I told them what our real intentions were, what our expectations were, and in my opinion that process lets you know which guys are right for you and which aren’t.”

“I think it’s a steal for Virginia.”

Thompson will be on the road recruiting this weekend. The makeup of her staff at UVA is still to be determined. She met Tuesday with each of Boyle’s assistant coaches – Katherine Graham, La’Keshia Frett Meredith and Tim Taylor – some or all of whom could be retained.

“I got positive feelings and feedback from all of them,” Thompson said, “but the reality is, in a 45-minute, 50-minute conversation, you can’t really get to know someone. You can’t find out whether or not you work well together. It is a process. So what I did was ask them what they wanted and what they were willing to do. And all three of them were open to figuring it out: getting to know me, and me getting to know them. And in a period of time, we both decide whether this is something that works for them, and we would go from there. I think that that is the best way for me to make an educated decision about how we should move forward.”

Thompson said she knew of Carla Williams, but had not met UVA’s new athletics director before the search began for Boyle’s successor. Williams played basketball at Georgia and later was an assistant coach there, and Thompson learned they had mutual friends in the sport.

The more she researched Virginia, the more Thompson realized how closely its values align with hers.

Once she started coaching, Thompson said, she knew she eventually would pursue a head job.

“The way I’m wired is that whatever it is that I decide to do or profession I try to enter, I want to be the absolute best,” she said. “I want to lead from the front, and in this profession, that’s being a head coach. I quickly knew that that’s something that I wanted to do. I have a vision. I have a feeling of what I want to give kids, how I want to pour into them my experience.

“The only way I can do that is being a head coach, because I don’t think that someone else can tell my story better than myself.”

Her son, Dyllan, who turns 13 next month, is a basketball fan who urged his mother to look into the opening at UVA.

“I was kind of shocked that he knew the possibilities of being at a place like the University of Virginia and where the program was at this moment,” Thompson said. “He was so encouraged.”

She smiled as she recounted the conversation Tuesday night.

“He said, ‘We will do great things there.’ And I said, ‘OK! I absolutely agree with you. I totally think that that’s possible.’ So it was just another one of those things that says this is good.”

A Year We Will Never Forget: 2019-20 in Review END_OF_DOCUMENT_TOKEN_TO_BE_REPLACED

‘What Will You Carry With You?’ Remarks From UVA President Jim Ryan END_OF_DOCUMENT_TOKEN_TO_BE_REPLACED