Tony Bennett Declined a Raise. Then He and His Wife Pledged $500K to Career Program 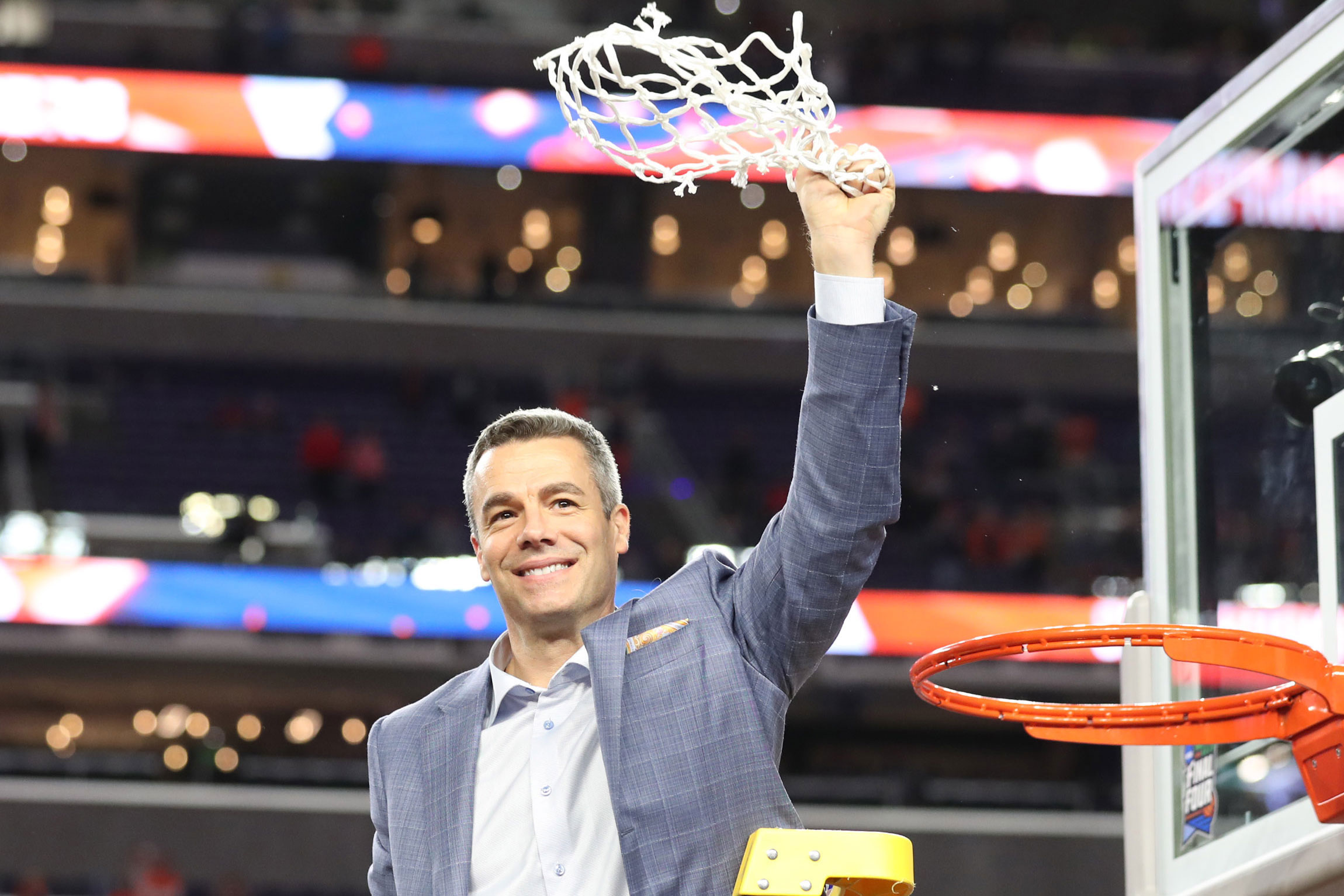 Tony Bennett, Dean and Markel Families Men’s Basketball Head Coach, said he was “blessed beyond what I deserve,” declined a raise and made a gift to a career development program for his players. (Photo by Matt Riley, UVA Athletics)

As he heads into his 11th season at the University of Virginia, Tony Bennett is at peace. He remains fiercely competitive and committed to his program, but he’s not driven by financial reward.

“I have more than I need,” Bennett, the Dean and Markel Families Men’s Basketball Head Coach, said. “I’m blessed beyond what I deserve.”

His 10th season ended on April 8 with the first NCAA title in program history, a feat that was celebrated Friday night during a gala at John Paul Jones Arena. The Cavaliers’ appearance in the Final Four was their first in 35 years, and their magical NCAA Tournament run, which came 12 months after a historic first-round loss to the University of Maryland, Baltimore County, united alumni, fans and the Charlottesville community.

“I know I’m a little biased,” Bennett said Friday night, “but I think it’s one of the greatest sports stories ever told.”

In the aftermath of the national championship, athletics director Carla Williams, with UVA President Jim Ryan’s blessing, met with Bennett to discuss revisions to his contract that would have included a substantial raise.

Bennett discussed the offer with his wife, Laurel. Then he declined the raise.

“This just does not happen in our industry,” Williams said.

Bennett asked Williams to focus instead on additional compensation for his staff and improvements that would benefit his program. He extended his contract another year and now has seven years remaining on his deal.

“Laurel and I are in a great spot, and in the past I’ve had increases in my contract,” Bennett said. “We just feel a great peace about where we’re at, all that’s taken place, and how we feel about this athletic department and this community and this school. I love being at UVA.

“President Ryan and Carla were very gracious in what they offered to me as a potential contract, but I have a very good contract. I have more than enough, and if there are ways that this can help out the athletic department, the other programs and coaches, by not tying up so much [in men’s basketball], that’s my desire.”

Bennett came to UVA from Washington State University, where in his three seasons as head coach he compiled a 69-33 record, with two trips to the NCAA Tournament and one to the National Invitational Tournament.

At Virginia, he’s built his program on the biblical pillars of humility, passion, unity, servanthood and thankfulness. Bennett’s record with the Wahoos is 254-89, with seven NCAA tournament appearances and one trip to the NIT.

He’s a prominent member of an athletics department with ambitious goals. Fundraising is well under way on a master plan to transform the athletics precinct on North Grounds. The project’s centerpieces include a new football operations center and a new Olympics sports center.

The latter’s features will include the Center for Citizen Leaders and Sports Ethics. That’s part of a new comprehensive student development program in which UVA’s Department of Athletics will collaborate with the University’s academic departments and centers to provide educational opportunities in career, leadership and personal development, as well as community engagement and academic achievement.

“I fully support what we’re trying to do,” Bennett said. “I see the big picture.”

Those are not empty words. The Bennetts have pledged $500,000 toward a career-development program that’s been launched for current and former UVA men’s basketball players.

“Tony’s decision – to turn down a well-deserved raise and instead invest in his players and UVA athletics more broadly – tells you everything you need to know about him as a leader and as a human being,” Ryan said. “Tony is one of the most selfless people I’ve ever met, and this is just the latest example. He and Laurel show us what it means to be great and good, and I hope they will continue to be a part of the UVA family for many years to come.”

Williams, too, saluted the Bennetts.

“I’m thankful for their consideration of the department, for their gift to the Master Plan, and for their commitment to the young men in our basketball program,” she said. “We want to lead the way, nationally, in regards to the student-athlete experience. Career development programming for our men’s basketball players will help set that standard and differentiate our program.

“I know they do not want any praise or recognition, but it is important for me to acknowledge how thankful I am for Tony and Laurel.”

Bennett said the idea was his wife’s. “She’s always said, ‘Is there something we can do that can make a difference?’ That’s been on her heart and mind, and we’ve talked about it a lot,” he said.

“We try to train our guys to be the best basketball players they can be, the school educates them, we try to teach them what it means to be a leader, and we try to pour the pillars into them. But what else can we do? There’s an incredible advantage in being a student-athlete here, but there are some disadvantages. You’re so consumed with your studies and then your workouts and your playing that you don’t always have the time to really pursue as many internships and career opportunities [as other students].”

Before coming to UVA in December 2017, Williams was deputy athletics director at the University of Georgia. Her colleagues in Athens included Ted White, who’s now a deputy AD at Virginia.

At Georgia, Williams and White made significant investments in student development, particularly career development for student-athletes. After Williams discussed the Bulldogs’ initiatives with Bennett, he spoke to his wife about how something similar might work at UVA.

“That’s where our heart is,” Bennett said. “Our donation is all about career development.

“Whether your players play professionally for 15 years, five years or zero years after college, they can still be working on the things that are going to help them out. For a lot of players, when their [basketball] careers are done, they’re starting over and they say, ‘Coach, can you help us?’ This is a way, without monopolizing a lot of their time, to be actively working on figuring out what it is they want to do and preparing them, giving them opportunities.

“Carla said this is generational. That’s where my heart is. This might be more significant than what we can do for them with the championships and winning. Whether they know it or not, two-thirds, three-quarters of their life is going to be outside the game. It’s going to be in work and providing for their families.”

Bennett is thrilled about the career development initiative, as well as the additional support the University is providing for his basketball program. Bennett’s staff has been well-compensated, and it recently added another member: Kirk Penney, whose title is director of player development/coaching staff consultant. Moreover, strength and conditioning coach Mike Curtis’ base of operations, the weight room at JPJ, will be expanded over the next year.

“We have one of the most beautiful facilities, I think, in college basketball, but some things have been unchanged for 13 years,” Bennett said of JPJ, which opened in 2006.

“Two years ago, we renovated our locker room, and that was significant. That hadn’t been touched. So things like that are important and make a difference. Adding a staff member and having the weight room expanded are significant things, and I prioritized those things after the season.”

He smiled. “Every year you do that. It just so happens that when you win a national championship, you probably have a bigger opportunity to do things.”

Reflecting on his first decade at UVA, Bennett said, “I so appreciate, more than people realize, how I’ve been taken care of since I’ve been here, from the previous administration, with Craig Littlepage and Jon Oliver, to the donors, to President [Teresa] Sullivan, and now Carla and President Ryan coming to me and saying, ‘We want to do something for you.’”

The administration has addressed the program’s needs, Bennett said, “and I have more than enough. So this is an opportunity, I think, to make a difference in the athletic department and in areas of our program that are important.”

With a new season approaching, Bennett is eager to build upon the foundation he’s laid.

“When you find a place that fits you and hopefully you fit, and it aligns with everything that matters, and you’re freed up as a coach to run your program in the way you deem best, to have success, and the administration allows that opportunity, and the fans support you,” Bennett said, that’s a special combination.

“As the saying goes: Don’t mess with happiness. Certainly there have been other opportunities, but I love the college game, I love what this University stands for, I love how as a staff we’ve been allowed to try to work towards it. It’s a journey. It’s hard. I love being here and continuing to try to build,” Bennett said.

“You see some things come to fruition when you have some success. It validates that, and then you start looking at the young men that you’ve coached and what they’re going on to do and the differences they’re making in society and in this program. You see how this has become a basketball family, which was a hope when I first got here. Now you’re seeing all these former players come back. They’re training here with Coach Curtis, they’re giving back, they’re doing things in the community, they’re involved with our current players.

“They’re what’s right about the game. That was my whole vision: Can you run a program that maybe suggests a different way to do it? I think we’ve found these guys that have so bought into the mission of this university, this athletic department and our specific program. They’ve embodied our pillars, and they’ve gone on to carve out successful professional careers and hopefully beyond.”

When Less Is More: How Harnessing the Power of Subtraction Can Add to Life END_OF_DOCUMENT_TOKEN_TO_BE_REPLACED