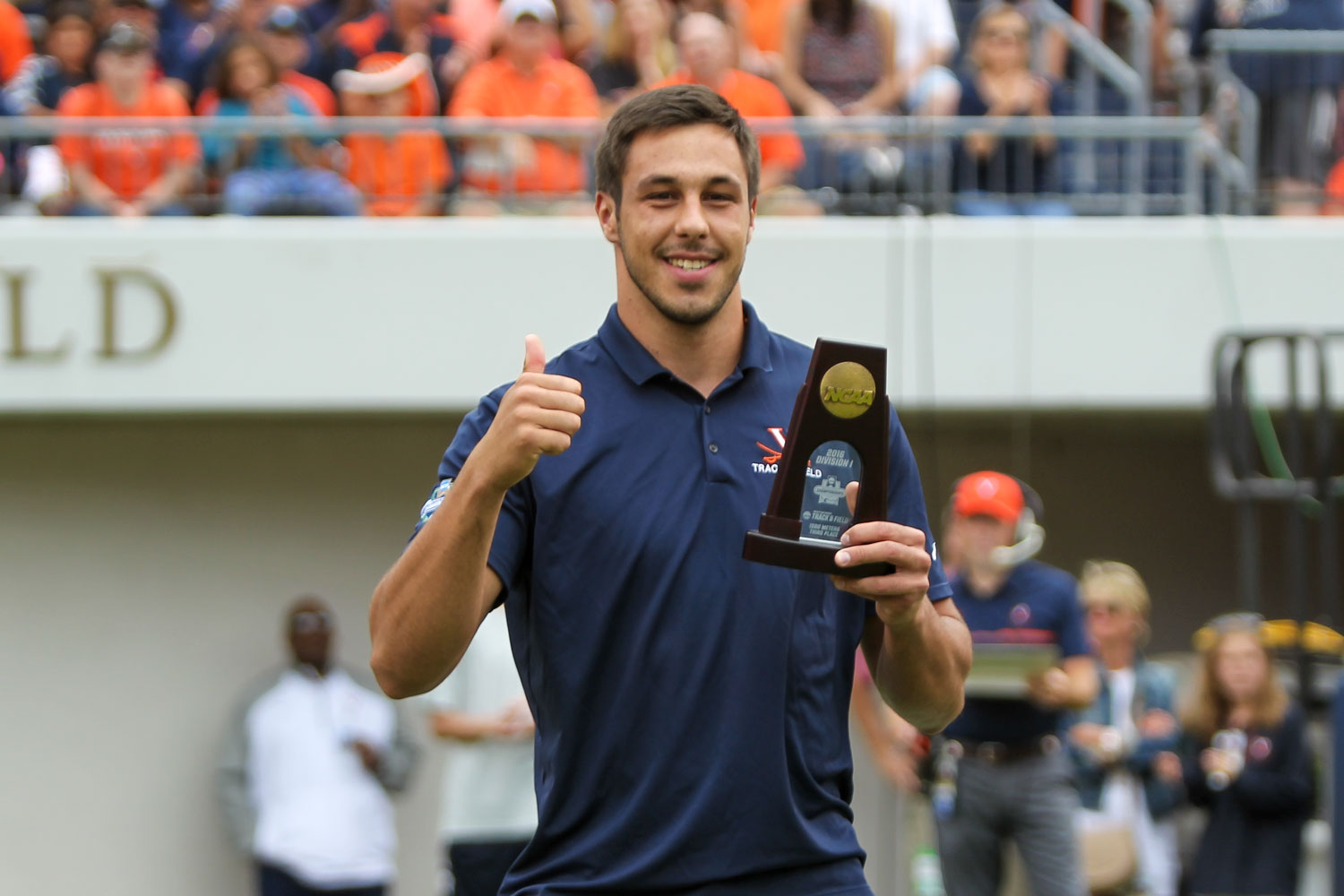 In the spring of 2014, standing next to the track at Lannigan Field, Bryan Fetzer was asked about the newest member of his program, Filip Mihaljevic.

“He’s definitely a program-changer kind of kid,” said Fetzer, head coach of the track and field and cross country teams at the University of Virginia.

Reminded recently about that bold statement, Fetzer smiled. Some predictions are easier to nail than others.

“We knew he was special,” Fetzer said. “I trust my assistant coaches and their talent evaluation.” 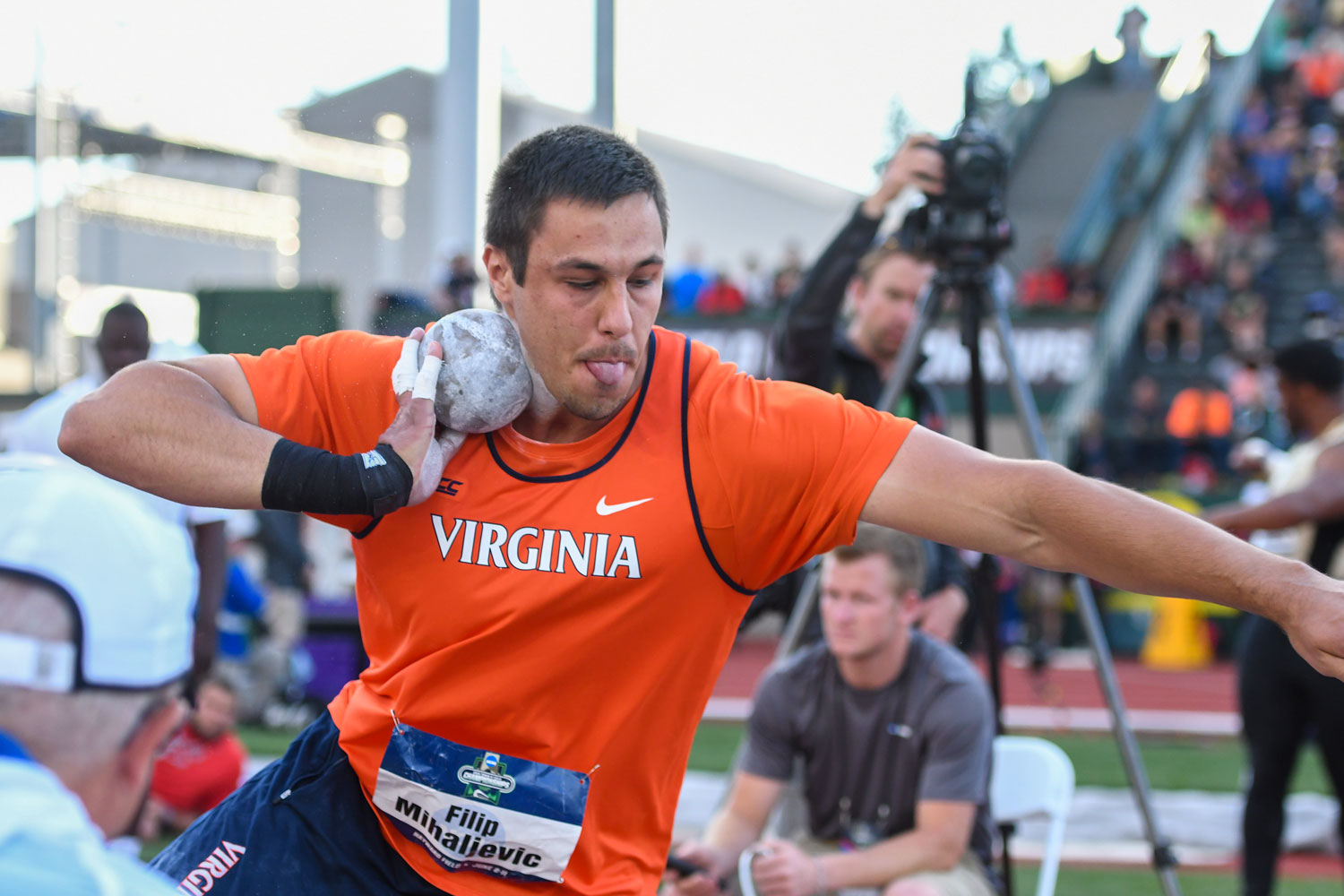 The Cavaliers’ throws coach, Martin Maric, a former NCAA champion in the discus, had raved about Mihaljevic’s “potential and his athleticism,” Fetzer said. “And then when I got to watch Filip [at a meet in Italy], you could see it. He has some incredible God-given abilities, and it was more about refining them and him growing into the frame that he has, and he did.”

If he’s not the greatest male athlete to come through UVA, Mihaljevic (pronounced Mee-holla-vich) is on the short list. During his four seasons of outdoor track and field and three of indoor –  Mihaljevic will graduate in December and won’t compete indoors for the Wahoos in 2018 – he won three NCAA championships and 10 ACC titles.

“I couldn’t have asked for more,” said Mihaljevic, who carries a double major in German and environmental sciences.

In June, Mihaljevic became only the third male thrower this century to sweep the shot put and discus titles at the same NCAA meet. His tour de force propelled Virginia to a third-place finish at the NCAA championships, its best performance ever.

“He is the face of UVA track and field for the last four years,” said Maric, a two-time Olympian for Croatia. “He carried the team a long way, and because of his leadership, everybody else on the team said, ‘OK, we’ve got to be a little tougher.’

“He definitely flourished. He was blooming, and he was growing on this team, and it grew with him. So as he got better, everybody else around him got better.”

“He said that I would be one of the kids who’s going to change the program, who’s going to turn it around,” Mihaljevic said. “But that was just on paper. But then it actually happened, and we did even more than we were expected to do.”

Mihaljevic, who was born in Bosnia, moved to Croatia when he was 17 and launched his track and field career with the storied ASK athletics club. He was 19 when he enrolled at UVA in January 2014.

“When he came, it was obvious to me that he was going to be one of the best of all time in this sport,” Maric said. How smoothly Mihaljevic would adjust to life in the United States, however, was uncertain.

When Mihaljevic, who has dual citizenship in Bosnia and Croatia, began competing for the ’Hoos in the spring of 2014, he earned All-America honors in both the shot put and the discus. Many more accolades would follow. As important to him as his feats as a thrower, though, are the relationships he’s made in Charlottesville.

His closest friends at UVA include decathlete Jack Lint and fellow throwers Oghenakpobo Efekoro – better known as Pobo – and Hilmar Jonsson. They’ll continue competing for Virginia after Mihaljevic leaves to pursue a professional career in track and field, but the bond that unites them will endure.

“It’s not only about track,” Mihaljevic said. “It’s not about decathlon, shot put, discus. We’re friends for life now, and I’m sure they’ll come to visit me. I’m sure I’ll come to visit them again here. We probably won’t be in touch as much as we are now, because we live together, but I’m sure we’ll be in touch on a weekly basis.”

Mihaljevic, who stands 6-foot-7, weighed about 240 pounds as a UVA freshman. He’s around 265 now and hopes to top the 270-pound mark in the spring.

In the summer of 2016, Mihaljevic represented Croatia in the shot put at the Olympic Games in Brazil. If he stays healthy, that’s not likely to be his only Olympic appearance.

“He’s not even close to being where he’s going to be,” Fetzer said. “He has the capability of being one of the best throwers in the history of the world.”

“He has two more Olympics to be in his peak,” Maric said. “He’s not even reaching his peak right now, and he’s already one of the best shot-putters in the world.”

Because he didn’t start throwing until his senior year of high school, Mihaljevic said, he hasn’t come close to reaching his potential in the sport.

“When I got here, I had been doing track for only a year and a half, really,” he said. “So I think I’m just starting, especially with my body weight.”

At 265 pounds, “I know I’m a big guy for most of the people,” Mihaljevic said, but not for his rivals at the Olympics in 2016 or at the IAAF World Championships in London this summer.

“When I get to 300 [pounds], I think I’ll be in the peak, with the body weight and strength levels,” Mihaljevic said. “Because my strength levels are still not even close to [those of] some other people, my bench or squat or clean. So I think I have a lot of improvement there.”

Throwers accounted for all UVA’s points at the NCAA outdoor championships in Eugene, Oregon. In addition to Mihaljevic’s sweep of the shot put and discus titles, Jordan Young placed third in the discus, Efekoro fourth in the shot put, and Jonsson fourth in the hammer throw.

“It’s going to be hard to match this,” Maric said. “This group was historic.”

Mihaljevic laughs when he thinks back to January 2014. He was the only male thrower in the Cavaliers’ program that semester. (There were two female throwers: Christine Bohan and Logan Clements.)

“At the time, I wasn’t worrying about that. I was just focusing on myself and trying to improve myself,” Mihaljevic said. “But then I realized how important the team is. And then Jordan came and then Pobo came and then Hilmar came.”

Mihaljevic marvels at the progress the throws program made during his career.

“It’s not like we’ve been here for 20 years,” he said. “We’ve made our legacy in the last four years, which is amazing. It usually doesn’t happen. It usually takes way more time to turn a program around, to establish yourself as one of the best in the history [of the sport].”

Mihaljevic, who in June was named the men’s scholar-athlete of the year for ACC outdoor track and field, will head to the Middle East after graduating from UVA. In Qatar, he’ll be reunited with his high school coach, Ivica Jakeljic.

He hopes to return for graduation on the Lawn in May. He benefited as much from UVA, Mihaljevic said, as the school benefited from him.

“I’ve been here for four years. [Without UVA], I wouldn’t have been where I’m at now.”

A Year We Will Never Forget: 2019-20 in Review END_OF_DOCUMENT_TOKEN_TO_BE_REPLACED

‘What Will You Carry With You?’ Remarks From UVA President Jim Ryan END_OF_DOCUMENT_TOKEN_TO_BE_REPLACED