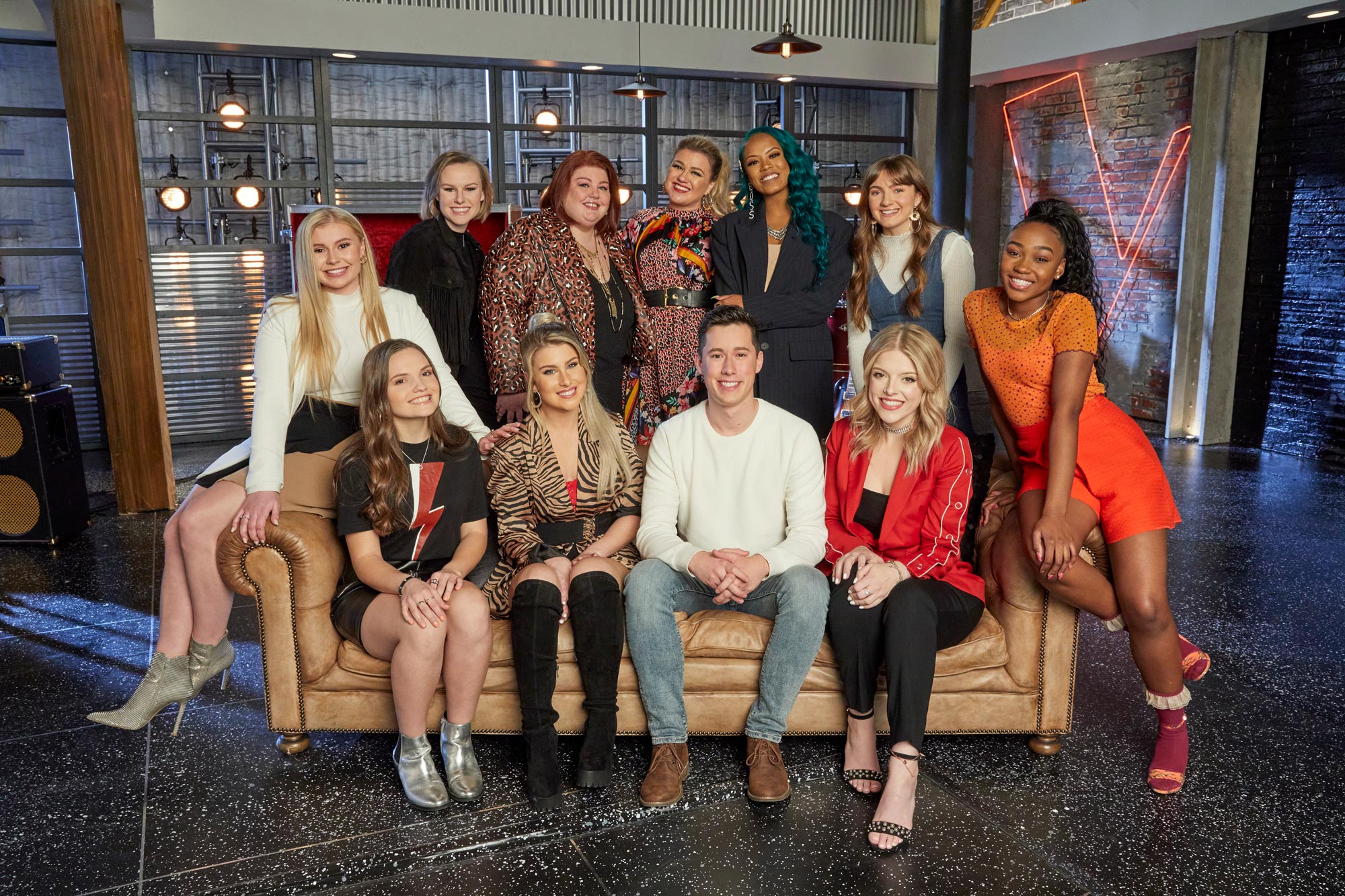 Editor’s note: This story was corrected March 24 to reflect uncertainty about the air date of Iverson’s appearance and the format of the competition.

This story may lift your spirits. Micah Iverson, a 2016 University of Virginia graduate and former president of the Virginia Gentlemen, is on “Team Kelly” – as in celebrity mentor Kelly Clarkson of “The Voice,” a singing competition – and you can tune into NBC on Monday nights to cheer him on as he vies to stay on the show.

Iverson is a member of an extraordinary family. He is one of nine siblings who were all raised in Tokyo by their missionary parents. Not only that – he and four of his siblings are UVA grads, and one of his older brothers, Joel, was also a president of the popular a cappella group, the Virginia Gentlemen when he was a fourth-year student in 2002.

Iverson performed Kodaline’s “All I Want” last week on “The Voice’s” blind audition show, in which celebrity judges Clarkson, Nick Jonas, John Legend and Blake Shelton sit with their backs to the performers and punch a button to spin around if they want to recruit a singer to their teams.

The song opens softy, with these lyrics:

‘I Love This Already’ – Kelly Clarkson

As Iverson began to sing, Clarkson said effusively, “Oh, I love this already,” before his voice lifted to a crescendo accompanied by a heart-thumping, galloping bass drum. Iverson was only 40 seconds into his performance when Clarkson slammed her hand down on her button to swing around and see Iverson for the first time.

At that moment, the camera shifted to six members of Iverson’s family, including his tearful mother, Carol. Watching offstage, they erupted in cheers as Clarkson swayed happily to Iverson’s performance.

Just as the Wahoo was closing out his song, eyes closed, Jonas and Shelton both spun their chairs around. In a moving moment, Iverson opened his eyes to see that now three judges were vying to have him on their teams. He was visibly choked up.

The performance has been viewed nearly 6 million times on YouTube since it was posted March 13. 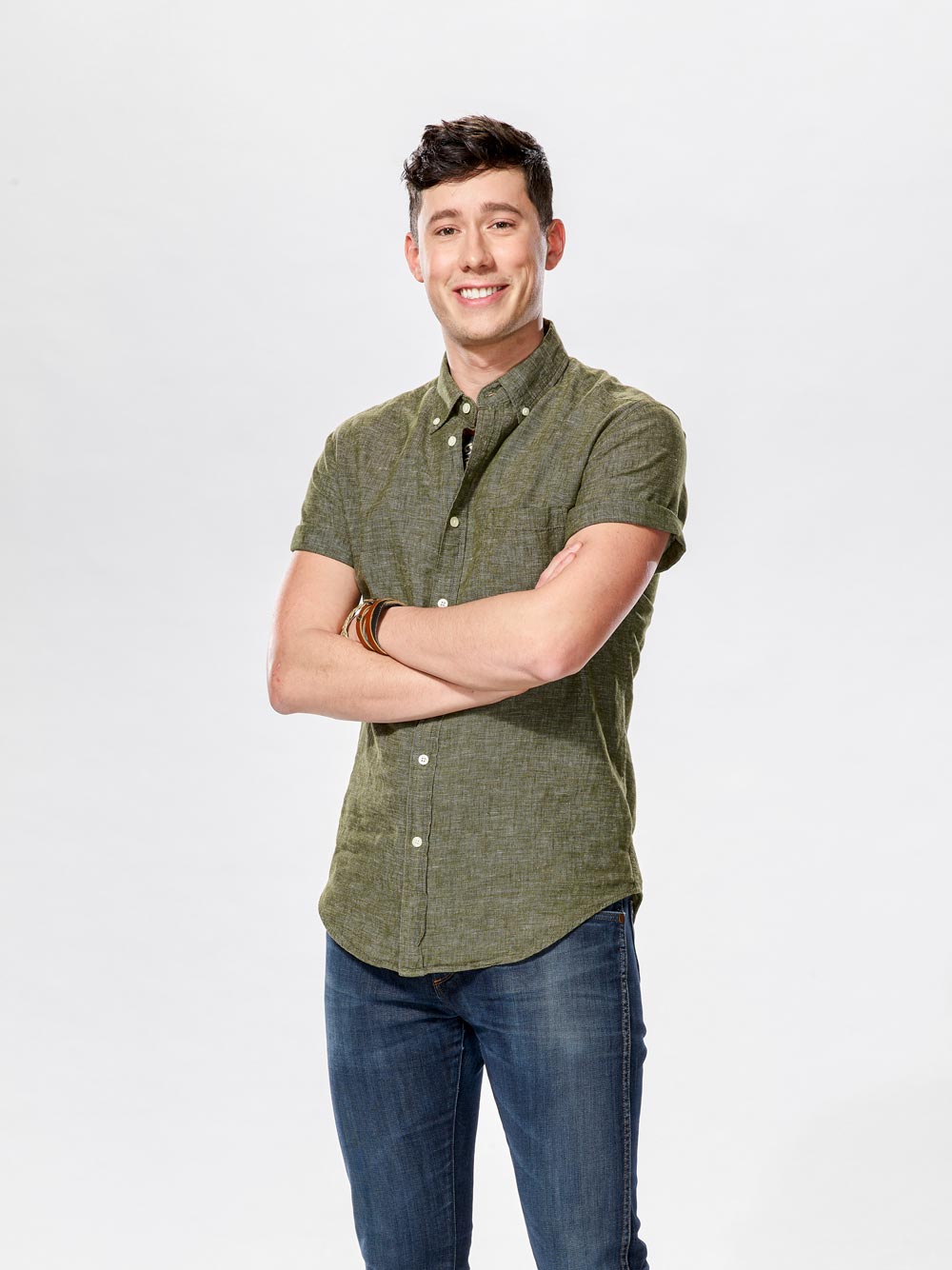 “Micah, your tone has this lovely, like ethereal kind of presence, and I think you should have been a ‘four-chair-turn’ and I regret not turning,” said Legend, an 11-time Grammy award winner known for such songs as “All of Me.”

Iverson, who double-majored in English and religious studies, said he has always loved music, but “I just never gave it a serious chance.”

“So, it was affirming to hear that these famous people, who are really musically vocally talented, actually heard something in my voice that they thought they could work with, specifically Kelly,” whom he chose as his coach.

It also didn’t hurt that Clarkson has also gone through a talent show as Iverson is doing right now. She was the very first winner of “American Idol” in 2002.

“She’s still musically relevant after all these years and she’s done this before. She knows what it’s like to go through a reality television show,” Iverson said.

Being a Virginia Gentleman helped Iverson to become the talented singer he is today.

“I was not that good when I first joined,” he laughed. “I had a lot of heart and a lot of passion, but technically, I was pretty undeveloped.

“They were like, ‘This kid’s OK. His brother was in the group, we’ll let him in,’” he recalled. “I think that’s where I learned a lot about vocal exercises, increasing my range and technique.”

So, what can viewers look forward to Monday night?

“I’m really curious about what it’s like working with Kelly,” Iverson said. “I’ve gotten to know her a little bit from the show so far. She’s awesome and really invested in me. I’m the only guy on her team, so I’m in a lane of my own on the show. So, moving forward, it would be cool if readers just stuck with the show.”

Social media is also a great way to track Iverson’s success on “The Voice.”

“Right now, some of my friends have started #MicahMondays and #TeamEstrogen because I’m the only guy on Team Kelly,” he said.

Iverson’s road to the “The Voice” started last fall after his very insistent best friend, fellow UVA grad and fellow Virginia Gentleman, Israel Vaughan, convinced him to attend tryouts being held at a convention center in Atlanta, where Iverson lives. He decided to give it a shot literally right before the auditions began and stood in line along with thousands of other “Voice” hopefuls. He wasn’t holding out too much hope, but was excited to be called back for more auditions and eventually make it to the televised blind auditions. 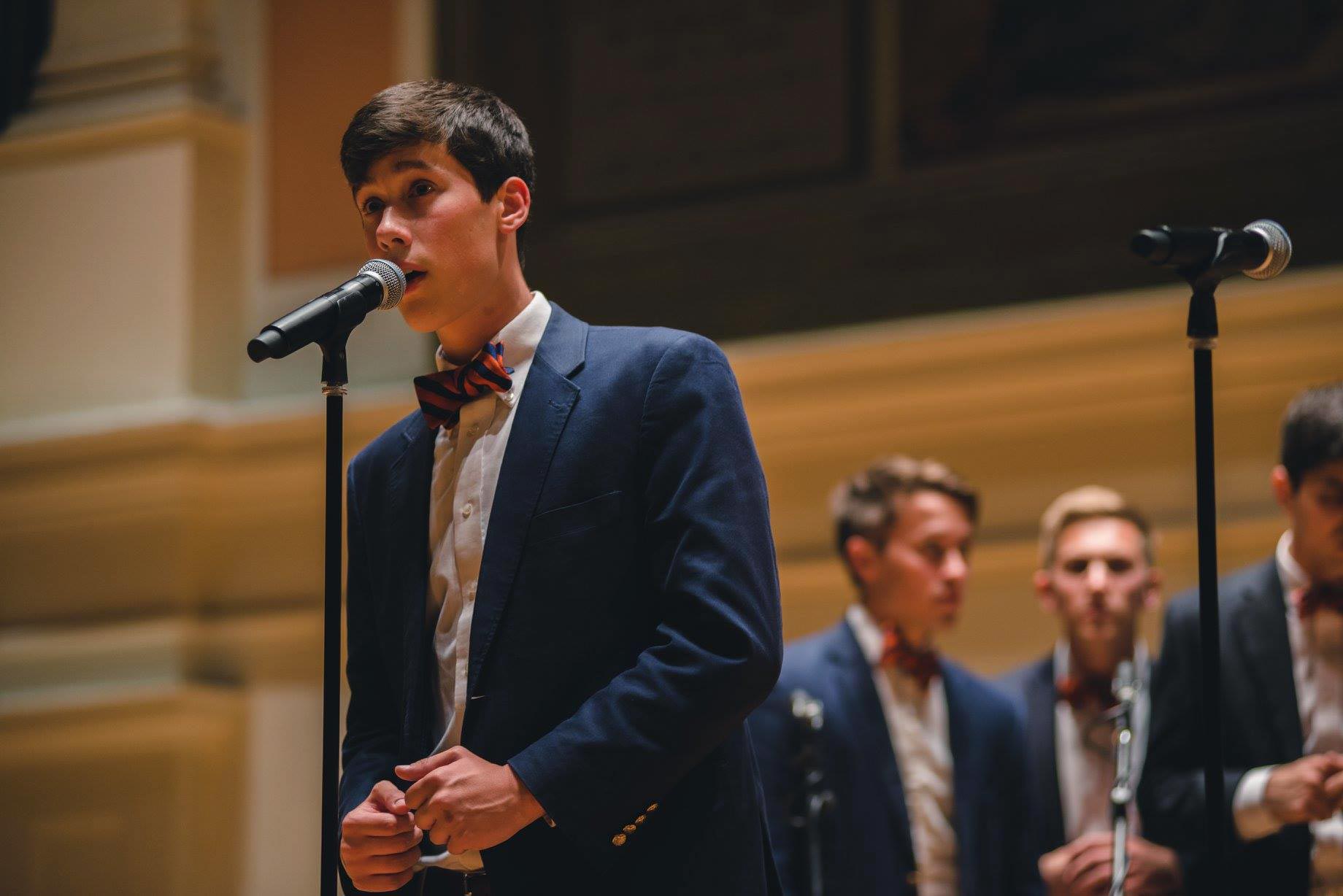 His appearance on the show has created some fan sites, where admirers have dug up as much information as they can about him, including the fact that he went to Antarctica with the Virginia Gentlemen.

“It’s honestly so strange,” he said. “People I have never met know all these very specific details about my life. At the same time, it is flattering, and I’m honored that anyone would take interest in my musical journey.”

The singer said he really hopes people can find some comfort and solace by watching the show during these difficult times.

“I have a couple hundred direct messages from people I don’t know on Instagram, and some of them are incredibly uplifting,” he said. “Earlier today, an elderly woman messaged me. She said she is a small business owner who makes dresses and that she is pretty fearful of everything shutting down. She said she’s had my song on repeat all day because, as small as it is, it’s something for her to focus on and listen to and she wrote me to thank me for that. 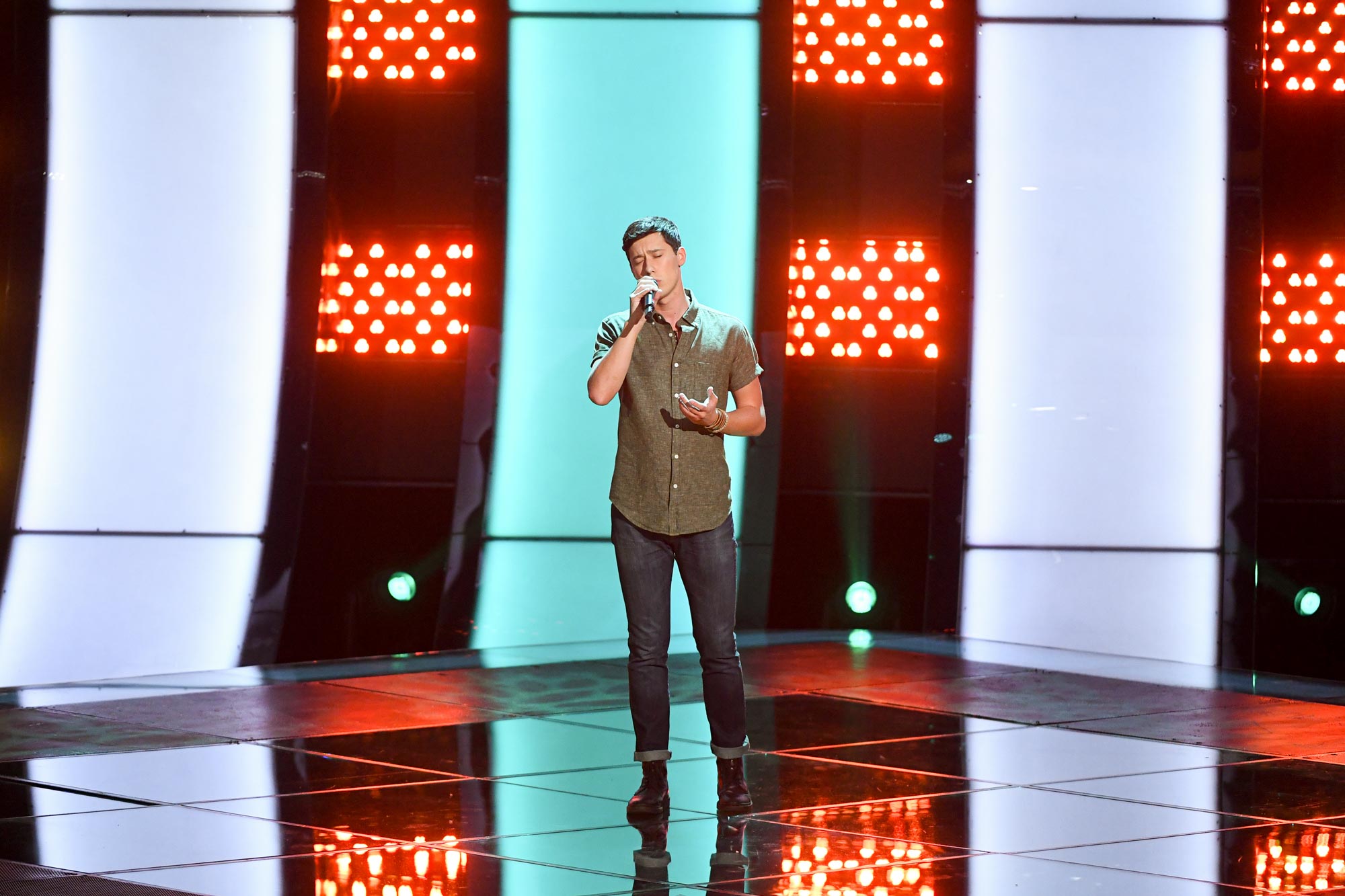 “I didn’t expect to have even that small impact, but I’m all the more grateful,” he said.

Iverson will return to the stage for one of the show’s remaining two “battle round” episodes (the first aired March 23), in which each team’s leader – Clarkson, in Iverson’s case – chooses a single song that two team members will perform as a competitive duet. Coaches select the most impressive singer to advance to the knockout rounds, and also have the option to “save” one performer or steal one from a different team.

The next stage of the competition features the playoffs, with live performances from a winnowed group of performers. Final rounds feature the top 12 performers; viewers can vote for their favorites online or by using their Xfinity X1 remotes and following the on-screen prompts. You can vote up to 10 times per artist. “The Voice” airs Monday nights at 8 p.m. EDT.

What it Means to Be a Cavalier Baseball Player END_OF_DOCUMENT_TOKEN_TO_BE_REPLACED