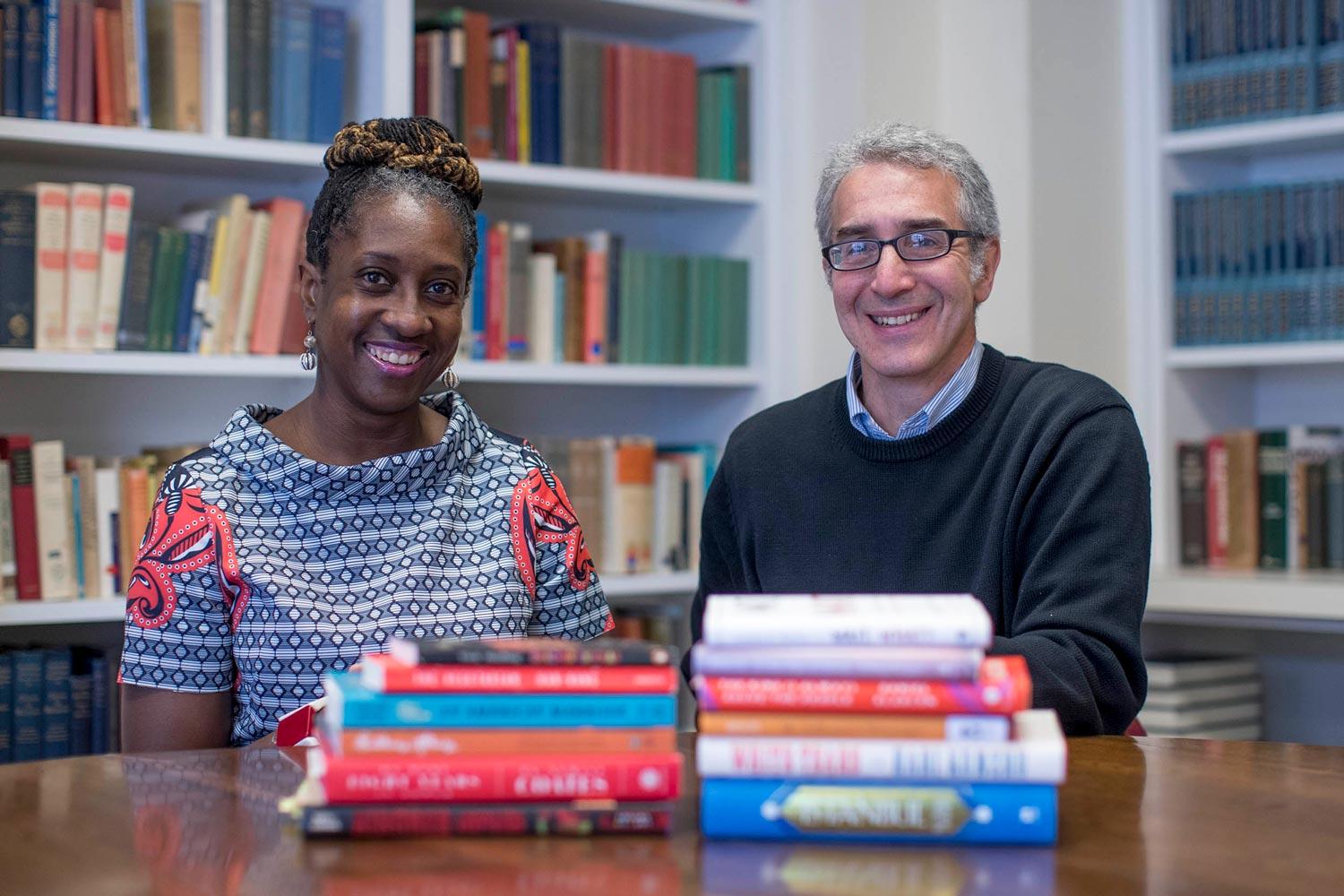 There’s no shortage of interesting books to dive into over the winter break or consider giving as gifts. To help you decide, University of Virginia English professor Lisa Woolfork and UVA Bookstore’s general books manager Roy Cadoff took to the University’s Facebook page to recommend a dozen recent titles, fiction and nonfiction.

Woolfork studies and teaches African-American and American contemporary literature and popular culture. On the English department faculty for 17 years, she just completed her first semester as a College Fellow, teaching in the New College Engagements Curriculum.

Cadoff, a 1990 alumnus of the College of Arts & Sciences, returned to the Grounds about two years ago and has worked in bookstores for more than 15 years. Among his duties, he keeps the shelves stocked with UVA authors and other new books.

No UVA list would be complete without a couple of the books recommended below. The full list Woolfork and Cadoff suggested is also included, from a meditation on silence and why it is essential, to a collection of essays by marginalized women on mothering and their activism to make a better world for their children.

UVA family and friends have probably heard of the first author Cadoff recommends. He’s someone we’ll be seeing and hearing a lot of starting next year: UVA President-elect James E. Ryan, who published “Wait, What? And Life’s Other Essential Questions” from a commencement speech he gave at Harvard University’s Graduate School of Education, where he is currently dean.

“It’s just five essential questions people should be asking themselves about life. It’s been very popular around Grounds,” Cadoff said, jokingly adding, “for some unknown reason.

“It’s a fantastic read to get a grip on what you should be thinking about and essential questions you should be asking throughout life.”

“I think it’s wonderful to think about a leadership position where people are asking questions that lead to self-reflection,” Woolfork said, adding it’s a good way to get to know about UVA’s incoming president.

In recommending “We Were Eight Years in Power: An American Tragedy” by Ta-Nehisi Coates, Woolfork pointed out that the title does not really refer to Barack Obama’s historic tenure as the first African-American president. The quote actually comes from the Reconstruction era. After black Americans gained the right to vote and entered into politics, the implementation of Jim Crow laws in the South cut down their electoral power. The book is a collection of Coates’ essays originally published in The Atlantic magazine – “on where we are and where we might go,” Woolfork said.

For Cadoff, “White Tears” by Hari Kunzru is the year’s best novel. “Like many novels, it takes place in New York City. It’s really a thriller book, yet it’s the music that pervades it. It’s all about the blues and the authentic feel of the blues and this long-lost blues hit that [these young music producers] find. But is it real or is it not real?

“His writing is magical. It’s going to be one of those books you pick up every couple of years and read again.”

A novel that Woolfork has read many times and recommends, Octavia Butler’s “Kindred,” is one she often teaches. She used the new graphic adaptation this past semester in the New College Curriculum course she co-taught, “Making the Invisible Visible.” Butler, a black female science-fiction writer who has won many awards, first published it in 1979.

“In graphic novels, the illustrations, the pictures – that’s what drives the narrative,” Woolfork said, “and these are absolutely beautiful images. Each one is thoughtfully rendered. … You can really fall into this book.

“The process of adaptation of this novel is incredibly well drawn. What you see is the care and diligence in adapting this powerful story and broadening its accessibility,” she said of Damian Duffy, who wrote the adaptation, and John Jennings, who illustrated it. “And the class really appreciated it, too.”

“Graphic novels don’t get enough credit for all that’s in them,” Cadoff said.

Capping off their conversation, Cadoff offered a book that makes a great gift for UVA lovers and celebrates the University’s bicentennial: “Mr. Jefferson’s Telescope: A History of The University of Virginia in 100 Objects” by Brendan Wolfe, an editor at the Virginia Foundation for the Humanities.

It’s an attractive, small volume to flip through. Each object – and many are unusual or unfamiliar – is accompanied by a well-written, one-page synopsis about what it means or what was going on at the University at the time, he said.

The University of Virginia Press published the book. The Albert and Shirley Small Special Collections Library has an accompanying exhibit where the pieces are on display until June.