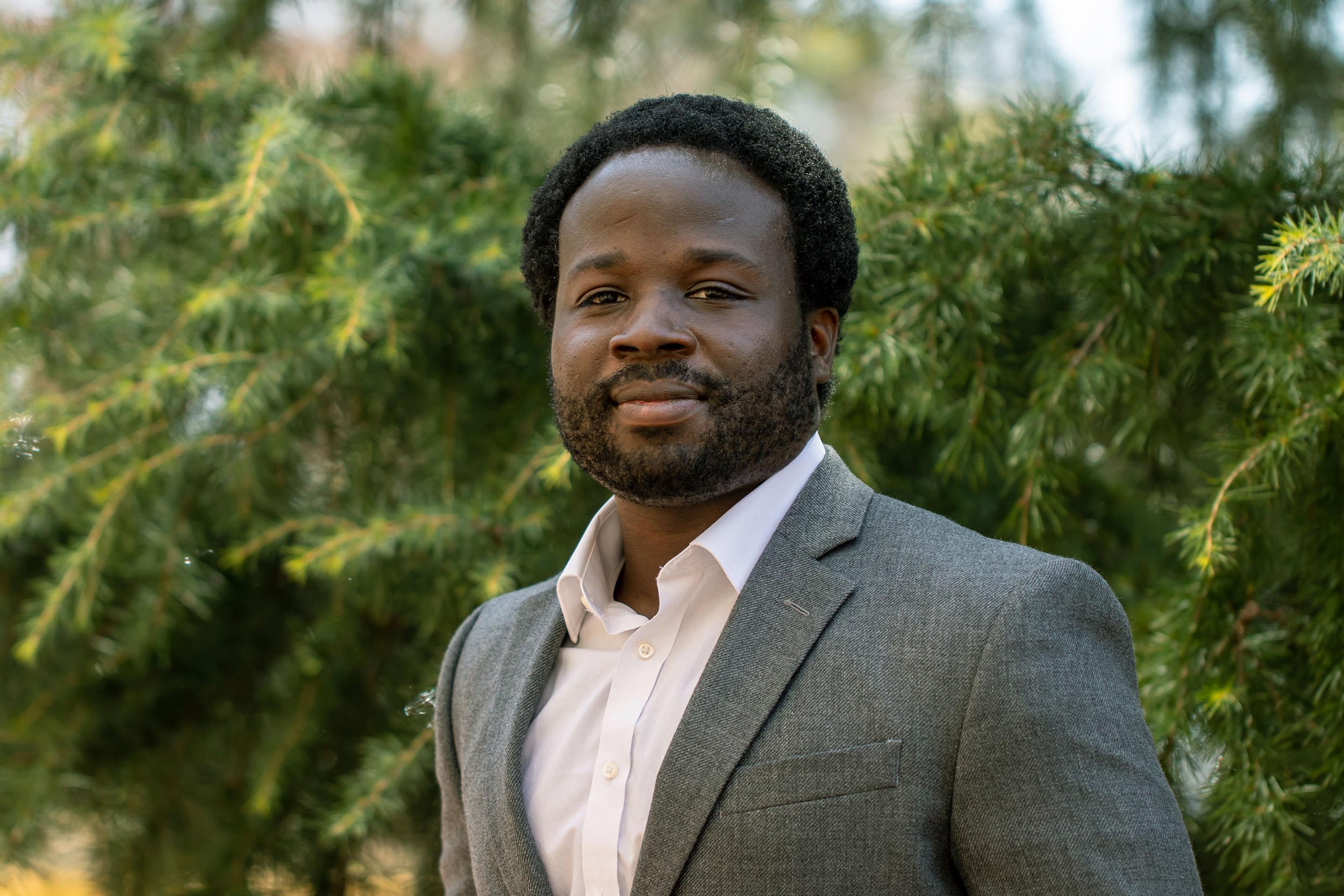 “One of the things about synthetic chemistry that I really love – the types of molecules I have been able to make now in my research group, this is the first time the world has ever seen them,” Gilliard said.

Gilliard, a University of Virginia chemistry professor (and currently a visiting professor at the Massachusetts Institute of Technology), manipulates chemistry to create compounds from fundamental reactions, then seeks practical applications for them.

His work has attracted a lot of attention. In the past year, Gilliard has received a Sloan Research Fellowship, which provides support for the general functioning of his lab, not a specific project; and a grant from the Arnold and Mabel Beckman Foundation’s Beckman Young Investigator Program, for his work with temperature-responsive molecules. The National Academy of Sciences also has selected him as a Kavli Fellow, which includes an invite to participate in the Kavli Frontiers of Science Symposium in Irvine, California, in October at the academy’s Beckman Center.

“We have published a number of important papers over the last two to three years, and that, in combination with the new data that is coming out of the lab, has generated some excitement,” Gilliard said.

Gilliard talks in plural, explaining his work to a visitor in terms of what “we” have done.

“I use ‘we’ because no faculty member, no researcher in a chemistry department in 2021, does anything alone, anywhere,” Gilliard said. “‘We’ for me is my entire research team. I have graduate students, I have post-docs and undergraduates who work with me, so I have a group of about 14 people who work with me right now.”

Dean Harman, professor of chemistry and the former department chair who hired Gilliard, said he is highly impressed with his colleague.

“Robert is the type of colleague everyone wishes they could have,” he said. “He’s someone you want to have lunch or go out for coffee with. Although a brilliant scientist, Robert doesn’t take himself too seriously and genuinely cares about others. He is a gifted teacher and mentor and values these qualities as highly as he does his research. He has a gentle demeanor and great sense of humor and a laugh that lights up a room.”

Gilliard, who was raised in Hartsville, South Carolina, did not have a chemistry set as a child, nor did he explore a lot of science as a youngster. However, he did enjoy science projects and classes in high school.

“I really got interested in this field as an undergraduate, when I started doing undergraduate research at Clemson with professor Rhett Smith,” Gilliard said. “Actually, I started as a chemical engineering student, and I didn’t really like that. One of my general chemistry professors said I should try research. That is pretty much how I got started, with those elementary conversations and listening to mentors. Once I got started in the research, I found I really loved what I was doing.”

“We are making molecules that can sense a specific temperature.”

That love carried Gilliard through a Bachelor of Science degree at Clemson, a Ph.D. at the University of Georgia and a research appointment as a UNCF-Merck and a Ford Foundation Postdoctoral Fellow, first in Zürich, Switzerland, and then at Case Western Reserve University in Ohio.

“I met some UVA faculty members and talked to them,” Gilliard said. “Someone I had mentored in the past was a graduate student here and spoke very highly of the place, and from those initial connections, I had the opportunity to interview here.”

Gilliard, who joined the UVA faculty in 2017, sees the University as a good fit for him.

“They have supported my research vision from the beginning, and that was really important to me,” Gilliard said. “That is one of the reasons I decided to come here. And it has gone well.”

Gilliard is the first UVA professor to be a recipient of the Beckman Young Investigator award, which provides funding for promising young faculty members in the early stages of their academic careers in the chemical and life sciences, particularly to foster the invention of methods, instruments and materials that will open new avenues of research in science. The Arnold and Mabel Beckman Foundation will provide Gilliard $600,000 over a four-year period for his research.

“The subject of the Beckman Foundation grant is that we are making molecules that can sense a specific temperature,” Gilliard said. “You have a molecule and, based on the temperature of the substance, it changes color or it changes fluorescence. So if something is colorless at room temperature, and if I heated it up to 50 degrees Celsius, it might change to orange or blue. It is the by-eye detection of heat; or cooling, it can go in the reverse direction.”

“Imagine temperature-responsive firefighting gear. If firefighters were in a fire and their gear heated up too much and was compromised, it could change color or fluoresce, letting them know that the efficacy of their gear was compromised and they would know to get out.”

One of my favorite reactions. Beautiful reduction!! pic.twitter.com/3JelA5NeEX

The video above, filmed by Kelsie Wentz, a graduate student in Gilliard’s research group, is an example of a chemical reduction reaction performed in their lab. Wentz has “played a pivotal role in our success,” Gilliard said.

Gilliard said the materials could also be used for food and medical packaging where maintaining the specific temperature of a substance is important, it could provide consumers with information on product integrity without the need for expensive analytical equipment.

“The COVID-19 vaccine that just came out, the Pfizer one, it is shipped in a small vial that is colorless and it has to remain cold,” he said. “The people who transport these are not scientists, and during shipping sometimes those containers could break or the cooling system malfunctions or it is left outside too long. If we had a thermochromic material and it reached 20 degrees Celsius, which is just below room temperature, it will let someone know this is too hot because now the colorless vial has turned green or blue. Now I know this vial of vaccine has been compromised.”

This summer and fall, Gilliard is one of seven Dr. Martin Luther King Jr. Visiting Professors at MIT, where he is working with Christopher C. Cummins, who researches organophosphorus compounds for biological applications and also phosphorous-containing heterocycles (a class of organic chemical compounds) that have an impact on materials chemistry.

“It is an extension of the work I have been doing and it is meant to raise the profile of my work,” Gilliard said. “MIT is one of the top programs in the country so being here and being connected with those folks could result in new opportunities for collaboration and problem-solving.”

The visiting scholars are expected to engage with life at MIT through teaching, research and other scholarly interactions. Gilliard said aside from mentoring and community engagement, he is just performing research.

“I go into the lab, but mostly to observe and learn what different techniques and processes they are using here that I can potentially bring back to UVA,” he said. “Everyone does things a little bit differently, but I am still working with my same research group.”

“As the pandemic restrictions ease a little bit, I want to bring at least part of my group to MIT to go around and see how they are doing things. Maybe we can bring back some of the training; maybe they can learn from us.”

“The compounds we use are earth-abundant … [they] feature elements such as bismuth and magnesium, which are non-toxic.”

Gilliard is also in the beginning stages of a Research Corporation for Science Advancement Scialog project, funded by the Alfred P. Sloan Foundation, to combat climate change by transforming the greenhouse gas carbon dioxide into less environmentally harmful materials. Gilliard’s lab is working with researchers from the University of Colorado Boulder and the University of Michigan to produce ligands, a stabilizer, to bond CO2 to help it interact with other elements.

“If you have a molecule of CO2, you can coordinate a ligand to CO2 to help stabilize it and/or activate it,” Gilliard said. “We make the ligand, we bind it to CO2 and it then changes the composition of CO2 to prepare it to be able to react in other ways and help it be reduced.”

“The ligand helps it react in a way that it would not normally react,” Gilliard said. “CO2 by itself is difficult to react. It is hard to reduce, and the way chemists typically reduce it, they use a catalyst. Those catalysts are generally very expensive, particularly the ones that are made up of transition metals, noble metals, palladium, platinum, iridium, rhodium.

“We want a metal-free method, and one way to do that is to use electrochemistry in combination with these ligands. That is the difference between the traditional methods and the methods we are using.”

Gilliard’s lab is also making compounds that are safer.

“The compounds we use are earth-abundant … [they] feature elements such as bismuth and magnesium, which are non-toxic,” he said.

Gilliard works with what he says is an uncommon part of the periodic table.

“But what I study is the ends of the periodic table – the two ends, groups 1 and 2 and 13 through 18. It is the overlooked class of elements, but now we are coming to find that those elements can have properties that are just as important and invaluable as the ones that are in the middle. And you can do similar chemistry at a lower cost in many cases.”

“It is always the case that some of the most unpredictable science leads to the most impactful science.”

T. Brent Gunnoe, Commonwealth Professor of Chemistry and director of graduate studies in the Department of Chemistry, described Gilliard’s work as “ground-breaking and leading to new understanding of what is possible in structure and bonding.”

“He is a superb mentor and teacher to students at both the undergraduate and graduate levels,” Gunnoe said. “Based on my observations, students in Robert’s research group and classroom have universal admiration and respect for his talent and dedication. It has been a pleasure to collaborate with Robert on research projects, where his affable personality and intensely strong work ethic helps create a productive and enjoyable effort. This is evidenced by the many collaborations across Grounds with Robert as a participant.”

Gilliard says he enjoys the unpredictability of his research.

“It is always the case that some of the most unpredictable science leads to the most impactful science,” he said. “Penicillin was an accident, and it revolutionized medical treatment.”

“This is why I am a very big proponent of fundamental science, because when you try to predict every single thing, you leave no room for new possibilities and new discoveries. The problems we tackle are important, but a lot of times when you are digging for something, you find something else that is more important than what you were digging for in the first place. That’s happened so many times.”

“Most of the time when you make these new compounds with new bonding, you will find that they have applications you could not have predicted even a short time ago,” he said. “I like discovery and I like learning and presenting that type of information to the field.”

Gilliard wants people to be able to benefit from his research and find new and previously unknown applications for his work.

“I hope that a lot of people will find the types of new molecules that we are making very useful for a range of different applications that are not known yet,” he said. “I see a broader utility for the classes of compounds that we have been making. My field is very international, and many people are interested in the chemistry of earth-abundant and widely available main-group elements.”

It’s Copperhead Season in Virginia. Here Is What You Need to Know END_OF_DOCUMENT_TOKEN_TO_BE_REPLACED

What’s Next for UVA’s Class of 2022? END_OF_DOCUMENT_TOKEN_TO_BE_REPLACED