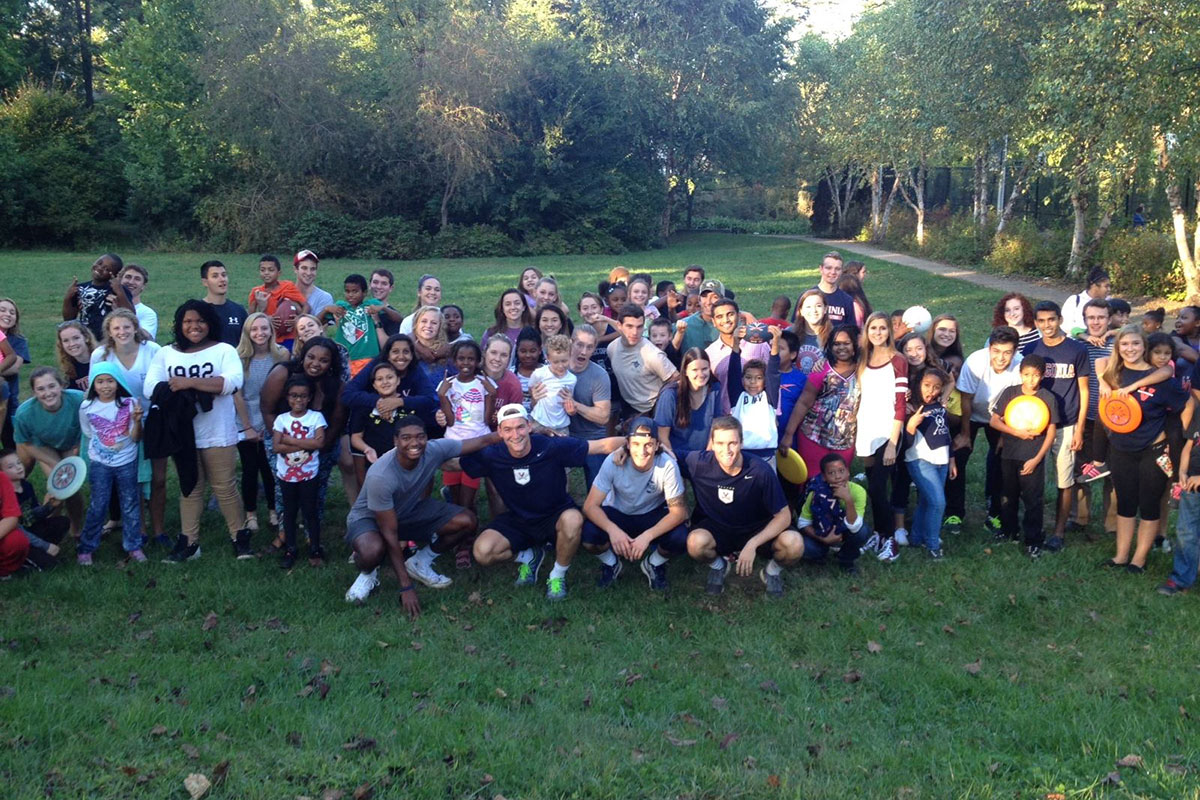 The men’s soccer team talked sportsmanship - and Frisbee technique – with the group in October.

Sam Marshall is a second-grader at Clark Elementary School in Charlottesville. During a typical day, the 8-year-old is studying words, learning patterns in mathematics and about the Earth and space.

Sam’s day diverges from the typical on Wednesday afternoons, when he rides a school bus to the Grounds of the University of Virginia, where he meets Brooks Anderson, a first-year student from Centreville.

For the next two hours, the two will play, laugh, learn and explore what to most elementary school students is a bit of a mystery: life on a college campus. 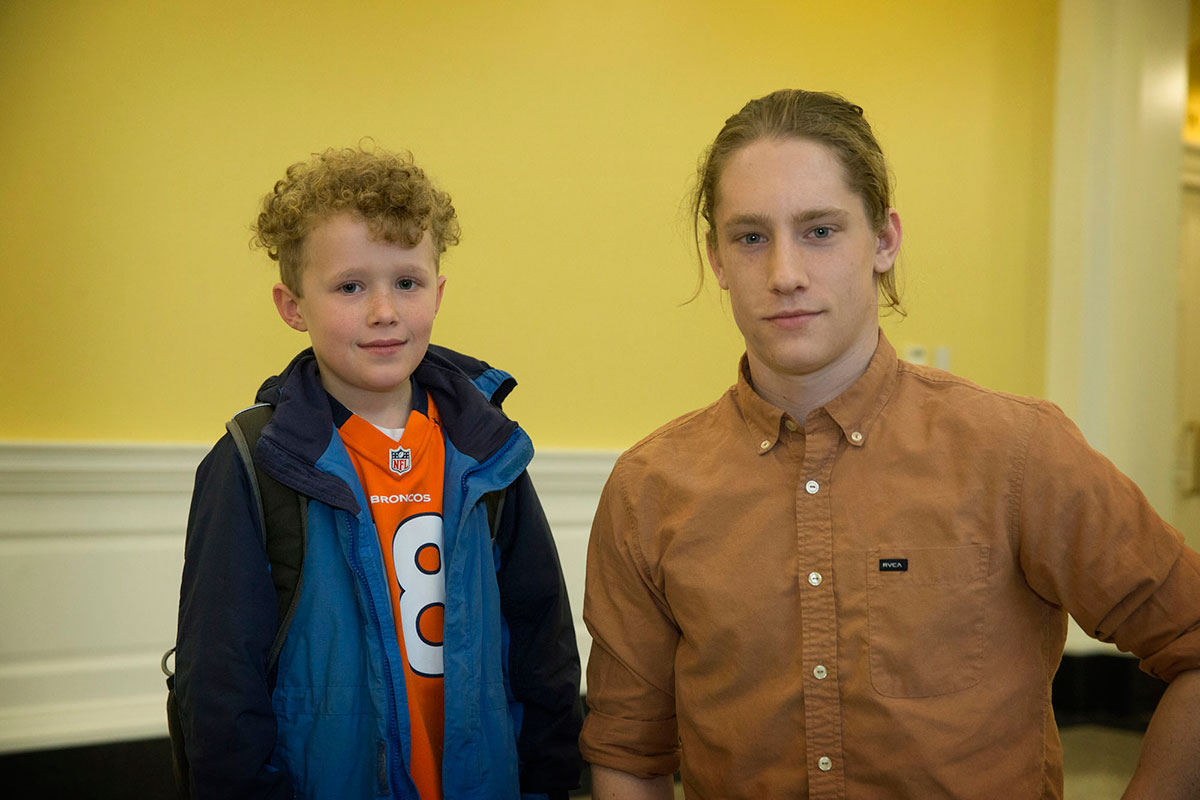 Their friendship is a product of UVA’s College Mentors program, now in its second year. About 80 “little buddies” come to Grounds each week to connect one-on-one with their mentors, all undergraduate students.

How Does it Work?

The College Mentors program is a national non-profit with programs at more than 30 universities. It is now in its second year at UVA.

The program’s self-declared mission is to “connect college students with the most to give to kids who need it most.” Teachers and principals from Clark and Johnson elementary schools in Charlottesville identify students for the program; most of the little buddies either live below the poverty level or would be the first in their families to attend college (though Sam does not fit into either category).

“The mentors are paired with the same little buddy every week so they are able to form really close bonds,” said UVA’s College Mentor president, Hayley Anderson, who is both a fourth-year psychology major and Brooks Anderson’s sister.

She said each week the group participates in an activity that falls into one of three categories; higher education, community service or culture and diversity.

Last fall, members of UVA’s men’s soccer team told the little buddies what it takes to be a student-athlete. Chemistry students showed the children how to make ice cream. On Veteran’s Day, the group met members of the ROTC and wrote letters to service members. And during the holidays, the mentors and buddies decorated Christmas cookies and made ornaments for patients in UVA’s Transitional Care Hospital.

Brooks Anderson said the program is a win-win for the children and the mentors. For many first- and second-year students, there can be long periods of time where classes and tests dominate their world. Being a mentor is a wonderful escape. “It’s absolutely a bright spot in my week. It’s really such a stress reliever,” he said. 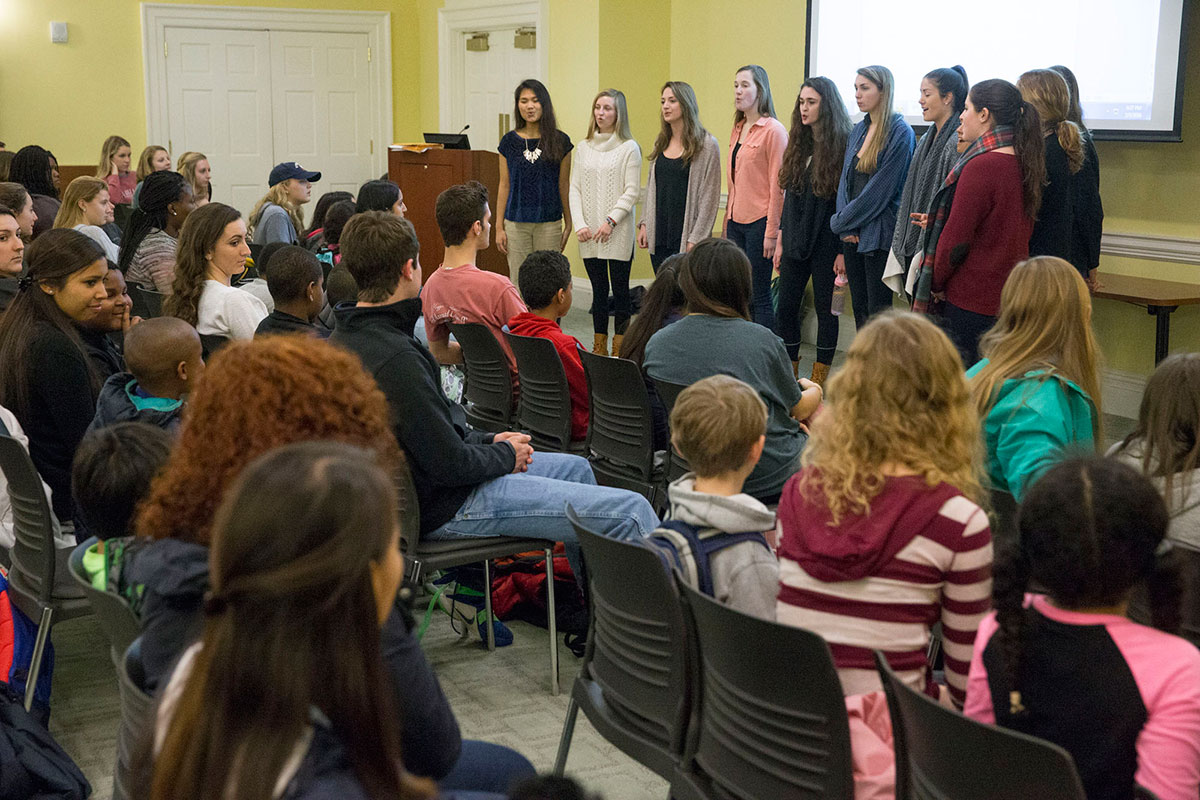 The Virginia Sil’Hooettes performed for the mentors and their “little buddies” earlier this month. (Photo by Dan Addison)

Sam’s mother, Amy Marshall, said her son has a father, but mostly lives with his two mothers. Thus, spending time with Brooks is wonderful, she said. “He is modeling for him how to be a good man,” she said.

For his part, Sam said Brooks makes him “feel happy,” and that they have fun together.

The program has definitely had an impact on young Sam’s plans for the future. When he started, college was not really on his radar screen. Does he think he wants to go now?

How to Get Involved

The program is popular with undergraduates. “To see all the ‘little ducklings’ marching around Grounds” is great PR for the program,” Brooks Anderson said.

About 150 students applied to be mentors at last year’s fall activities fair. Eighty students were accepted.

(To find out if you are good fit, click here and join Brooks and all the “little buddies” next semester.)

At UVA, There Is a Club for Everyone END_OF_DOCUMENT_TOKEN_TO_BE_REPLACED