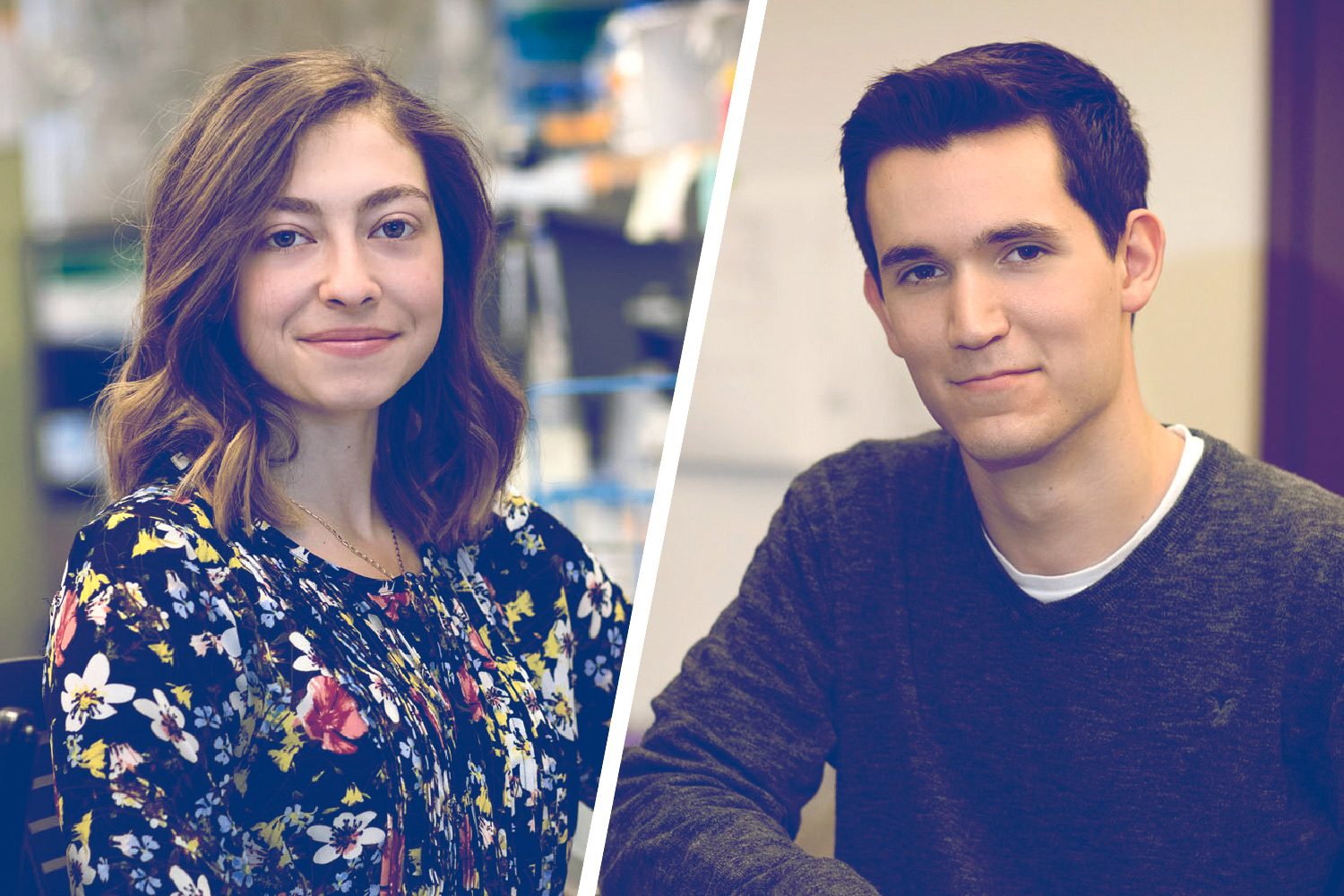 Nayla Labban of Richmond, a second-year biology major focusing on neurobiology, and J.C. Panagides, of Sterling, a third-year biomedical engineering major with a minor in applied mathematics, have landed Arnold and Mabel Beckman Foundation Scholarships.

“These are some of the highest awards in the nation for excellence in undergraduate research,” said Associate Professor of Biomedical Engineering William Guilford, who directs the Beckman Scholars program. “Our students always deliver exceptional research proposals, living up to the Beckman’s guiding principle that ‘there is no satisfactory substitute for excellence.’ We are fortunate to have such incredibly hard-working undergraduate scientists at UVA, guided by such dedicated research mentors.”

Labban works in the laboratory of Sarah Kucenas, an associate professor of biology, studying a particular neuronal cell type known as MEP glia, which marks the boundary between the central and peripheral nervous systems.

“Understanding which genes confer their regulatory behavior could be the key to unlocking the causes and potential treatments of demyelinating diseases (which reduce nerve function) and peripheral neuropathies,” she said.

Panagides, who is exploring using silver as a tool in fighting microbes, said the Beckman Scholarship will enable him to practically evaluate an idea to combat the complex biological phenomenon of antibiotic resistance that began to form while he was in Africa. He hopes his research will start a lifelong career in pathology.

Jason Papin, a professor in the Department of Biomedical Engineering and director of the Computational Systems Biology Laboratory in which Panagides is a research assistant, said the student is looking at strategies for grouping and utilizing antimicrobials in optimal ways.

Nayla Labban: Her Laugh and Her Excitement About Science Are Infectious

Kucenas said Labban personifies the type of student with whom she enjoys working and she thinks of her as a graduate student, based on her maturity and depth of knowledge.

“Nayla has made my lab a better place and made me a better mentor,” Kucenas said. “Her insatiable thirst for knowledge and excitement about science is infectious and she makes others around her better. I have no doubt that Nayla is destined for success. I feel privileged that she has allowed me to foster her growth.”

Kucenas described Labban as “fearless,” saying, “She jumps in feet-first when tackling new techniques and questions in the lab and has proven to be indispensable on the project she is currently working on. She’s also incredibly personable and is always smiling and laughing in the lab. Anyone who walks by can see the obvious enthusiasm and passion she has, and it is infectious.”

Laura Fontenas, a post-doctoral student working in Kucenas’ lab, has been mentoring Labban for a year and is impressed with how much she has evolved.

“As time has passed, I have seen her become more and more passionate about getting data and understanding what lies behind the results,” Fontenas said. “Nayla has gained in confidence and experience and today she can lead experiments independently and confidently and, above all, makes me proud.”

Fontenas said it is a pleasure working with Labban, not just because of her talent, but also her other traits and activities.

“Nayla is diligent and very reliable, but beyond all her professional skills, she is a very funny and easy-going young woman  who has a great sense of humor and plenty of interests that make her unique,” she said. “She supports UVA in so many different ways. She does not miss a football or basketball game, she helps refugees learn English, and she also is involved in student life by being an awesome resident assistant. I could not have dreamt of a better student and friend.”

An Echols Scholar, Labban has received the Virginia Council on Women STEM Scholarship, the Linhart Foundation Scholarship and the SUEZ Academic Achievement Award Scholarship. She currently is a resident adviser and next year will be a senior resident for Housing and Residence Life; she also is a scribe in the UVA Health System’s Department of Emergency Medicine, a teaching assistant for the Department of Biology’s “Introduction to Neurobiology” course and a Madison House Medical Services hospital volunteer. She is a member of the UVA Muslim Student Association and the UVA Middle Eastern Mentorship Program.

“This scholarship will allow me to commit a greater portion of my time and effort to my own research project, while also making me privy to the international scientific community through attending conferences and seminars,” Labban said.

“Last summer, I spent nearly two months in the rural South African community of Hammanskraal helping to implement a silver-nanoparticle-based water treatment facility that relies on the ability of silver to selectively destroy the molecular metabolism of harmful waterborne pathogens,” Panagides said. “After returning to the U.S., I delved into the literature surrounding silver as a therapeutic agent for a variety of bacteria and formed the hypothesis that it might be a valuable tool to combat microbes that have already developed a resistance to traditional antibiotics.”

Papin said “Antibiotic resistance is emerging as one of the most important biomedical challenges of our near future. Science needs to develop ways to identify new drugs and to make better use of existing drugs. J.C. is proposing to explore the fascinating interplay between multiple antimicrobials. Concepts like collateral sensitivity and bacterial memory have been recently explored to try to develop strategies for maximizing efficacy of antibiotics; absent in this research to date is the interplay between antibiotics and metals with antimicrobial activity.”

Papin also praised Panagides for his skill and enthusiasm.

“He already has extensive experience as a researcher; beyond the time in my lab, he spent one summer working at the National Institutes of Health and this most recent summer on a research project in South Africa,” Papin said. “During the past couple of academic years, he’s continued to work in my lab and he’s a co-author on a manuscript that we anticipate we will submit in the next month or so. J.C. absolutely loves doing research.”

Tom Moutinho, a graduate student mentor with whom Panagides has been working, called the student “self-driven” and “passionate about applying knowledge.”

Panagides, a member of Tau Beta Pi Engineering Honor Society, has received Intermediate Honors, a Robert and Eileen Honse Engineering Scholarship, a Community-Based Undergraduate Research Grant, a Center for Global Health Travel Grant and a Green Initiatives Funding Tomorrow Grant. He applied in 2016 for a provisional patent application for a project pursued in the Computational Systems Biology Laboratory.

Panagides is also a teaching assistant in courses on differential equations and on probability and statistics, a volunteer emergency medical technician at Stony Point Volunteer Fire Company and a medical scribe in the UVA Health System’s Department of Emergency Medicine. He was a research editor for Spectra, the Undergraduate Journal of Engineering and Science, and a National Institutes of Health summer research fellow, and participated in the National Ocean Sciences Bowl and TEDxUVA.

A graduate of the Thomas Jefferson High School for Science and Technology, Panagides plans to use his laboratory training and engineering mindset to create effective clinical tools from emergent pathological knowledge.

“As the tools to evaluate, describe and apply biology to solve health-related problems mature, I plan to be on the forefront of designing preventative medicine strategies throughout my career,” he said. “In the current era of medical research, there is a clear advantage to study not only how individual strains of bacteria respond to environmental stimuli, but also how these strains interact and contribute to larger communities and biological systems present in the human body.”

Last year, the University received a three-year renewal of the Beckman Scholars grant – maintaining UVA as one of 10 universities nationwide selected for the program, largely because of its commitment to quality undergraduate research. The grant, worth approximately $156,000, funds scholarships to two undergraduate researchers per year working in chemistry, biochemistry and the biological and medical sciences. The scholars are selected locally and the grants provide $21,000 in stipend and travel for two summers and one academic year. Each winner’s mentor is provided with an additional $5,000 to be used in direct support of their scholar.

The Beckman Scholars will enroll in an “Applied Technical Writing” course taught by Kay Neeley of the Department of Engineering and Society. This course, also available to a small group of other students, will prepare them for writing their research for publication.

“The objective is for student-scientists to learn what gaps remain in their work so that they can fill them before leaving UVA and their lab,” Guilford said. “It’s often through writing for publication that professionals find those gaps. This class will be funded by the Office of the Provost, and the Office of the Vice President for Research.”

A Year We Will Never Forget: 2019-20 in Review END_OF_DOCUMENT_TOKEN_TO_BE_REPLACED

‘What Will You Carry With You?’ Remarks From UVA President Jim Ryan END_OF_DOCUMENT_TOKEN_TO_BE_REPLACED