Understanding the Jewish Experience in a Muslim Land 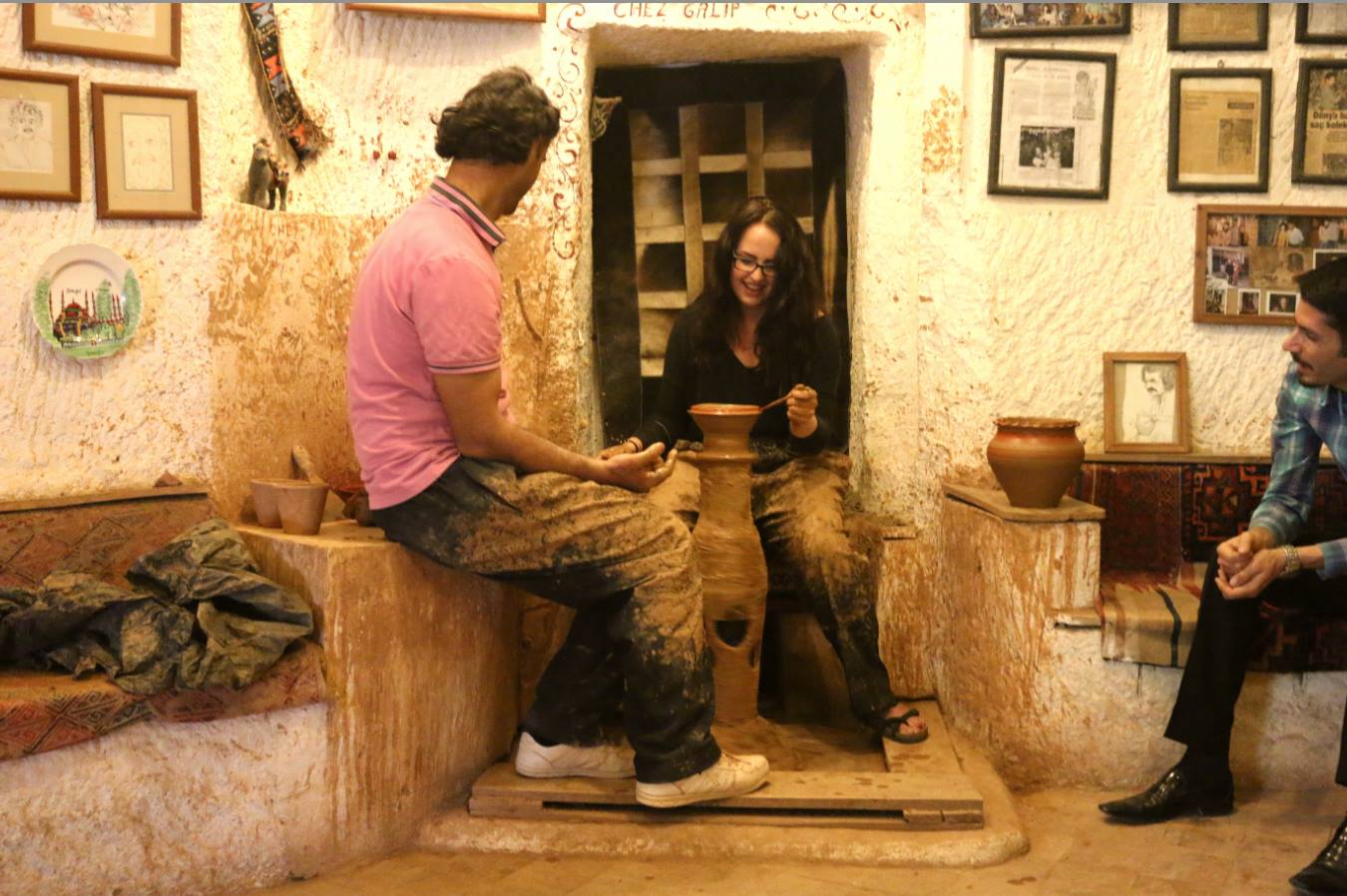 Sasha Ward on the weekend in the historical region of Kapadokya, Turkey, learning how to make pottery

What do you do when you’ve traveled halfway around the world, only to find that the people who speak a language you’re trying to study won’t talk to you?

When Sasha Ward, a fourth-year Spanish and Jewish studies major at the University of Virginia, was lining up interviews as part of her effort to document the revival of Jewish print culture in Istanbul, Turkey this summer, she hadn’t expected to have trouble finding Jewish community members to talk about their writings, culture and heritage.

But when violence broke out between Israelis and Palestinians in nearby Gaza, her appointments started to cancel.

“Turkey decided to make all these statements aligning themselves with Gaza, and there were huge protests outside the Israeli consulate,” Ward said. “So when I called people to interview for my project, no one responded.”

She had returned to the predominantly Muslim country after interning there for a journalism-abroad program in the summer of 2013, when she had developed an interest in the small Jewish culture after visiting a synagogue on a story assignment. Ward, who was still learning Turkish, heard an unfamiliar language echoing off the walls there – which, she later found, was Ladino, a mixture of Spanish and Hebrew spoken mainly by Sephardic (Spanish) Jews and considered a minority language in Israel, Turkey and France.

Ward, who is ethnically Jewish and fluent in Spanish, loves languages – she’s dabbled in five – and became deeply interested in Ladino. It’s a dying language, mostly used in print in Turkey, a country whose Jewish population has shrunk from half a million to 10,000. By the time her first summer abroad ended, Ward had fallen in love with the country and its people, and she decided to focus her thesis at U.Va. on the renewal of Ladino print culture in Turkey.

This summer, she applied for and received a Harrison Undergraduate Research Award and a U.Va. Small Research and Travel Grant to return to Istanbul and research the way the Jewish society is using its print culture – magazines, periodicals and newspapers written in the Ladino language – to preserve its cultural identity as a minority in a predominantly Muslim nation.

The Jewish publications historically talked about politics, using humor and wit to convey current political and social dialogue akin to Shakespeare’s histories in the newly formed England. But how did they function today?

“My hypothesis did a 180,” she said. “I originally thought that the Ladino press is this place to preserve Jewish culture, but it’s not so much to talk about anything political at all. Which is interesting, because the absences of political discussion give you indication of just how insecure Jewish people are here if you’re not feeling safe to speak politically.”

She found that the Jewish community members preferred to align themselves with a national Turkish identity, rather than their religious ethnicity. “Everyone told me ‘I identify as Turkish, because I feel so at home here, and nothing makes me feel comfortable when I’m Jewish,’” Ward said.

“I think it has to do with this very strong sense of Turkish patriotism. There’s really big pride in being Turkish … and projecting that they feel at home here is part of that identity, because Turks can’t distinguish between Israelis and Jews,” she said.

Instead of being an outlet, print culture was more of a plug, and the project about the present quickly turned into a comparative analysis to the past. During the interview drought, she went back and explored the older newspapers and periodicals written by famous Sephardic Jewish writers. There were once 188 Jewish-centered newspapers in the country, and Ward worked to unearth and compare them – and found that they were talking a lot more about politics.

“They were very tongue-in-cheek, using really heavy irony to talk about important things going on in the country, like, ‘Press censorship has just been lifted, so I can talk about whatever I want, but people will get mad at me … so I guess there’s nothing to talk about,’ making the point that even though press censorship was gone, people still censored themselves when they talked about their beliefs.”

Ward is ultimately still working to document the preservation of Jewish and Ladino culture, no matter what turn it might take, before it’s gone.

“I think the reason why I’m so drawn to this kind of work is because usually in the States, work on Jewish studies is disproportionally Eastern European-based. There’s not as much research on Sephardic Jews, but it’s a really important sector of people – there are millions of Sephardic Jews, and their language is dying. I want to help encapsulate this language and culture before it’s gone. And in Turkey, they don’t really have an interest in preserving it, which shows how they’ve responded to changes in the Turkish community and anti-Semitism.”

And while Ward was seeing the complications of cultural identity, she was also witnessing reminders of a common humanity.

“I remember one interview that wowed me – a couple, they’d been married 67 years and lived through everything,” she said. “During the interview, their daughter was translating from their Ladino to her Turkish to my English, and it dawned on me that it was really funny how communication doesn’t have anything to do with language; everyone got each other in the end.

“We were comparing words from all these languages and it showed how the same we are, despite cultural differences. And it converged in one space, all the corners of the Earth in one room.”