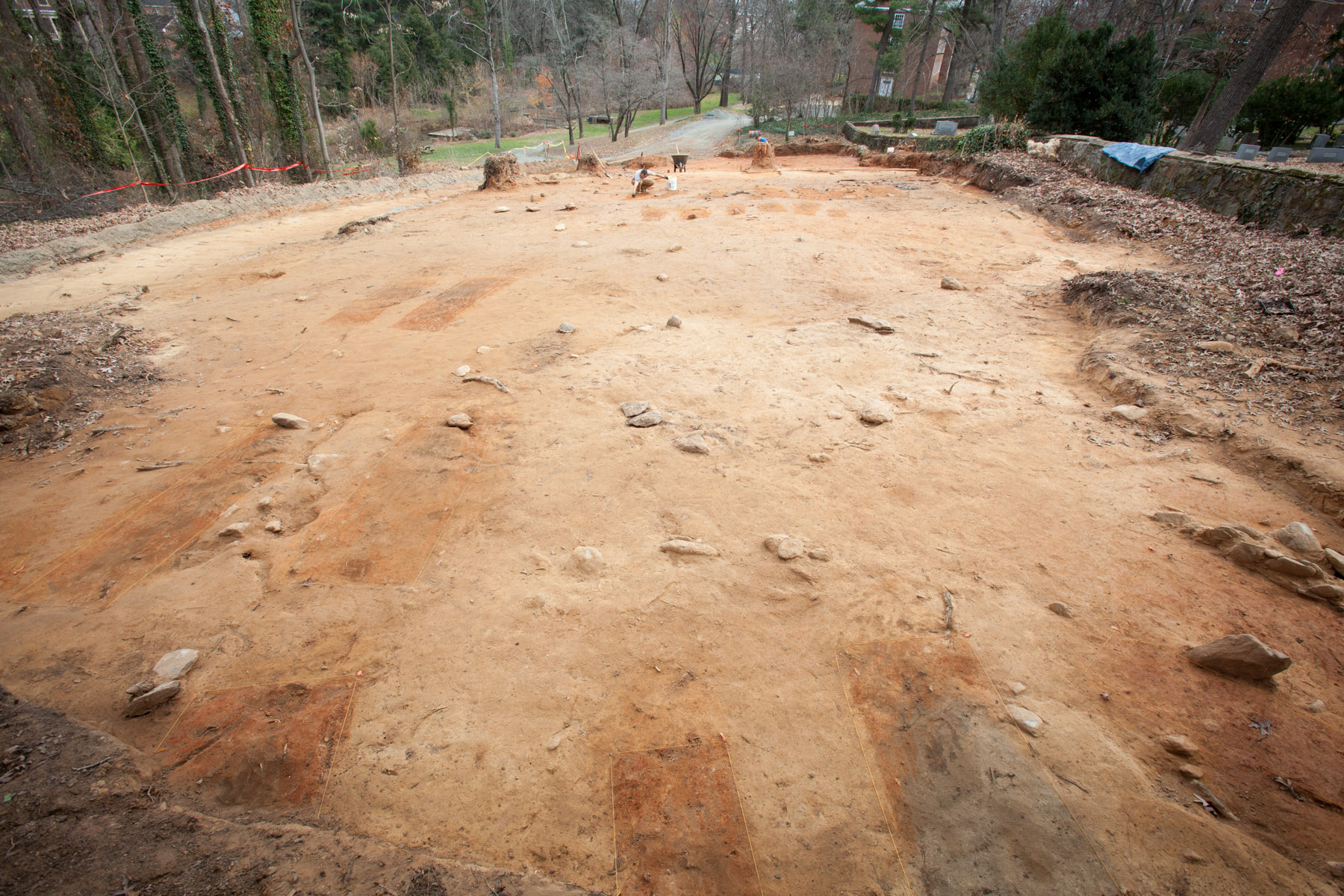 A total of 67 previously unknown grave shafts have been identified north of and adjacent to the University Cemetery since the second phase of an archaeological survey began Oct. 22 for a planned expansion of the cemetery.

Rivanna Archaeological Services LLC found the interments in an area outside of a stone wall built in 1915. Approximately eight grave shafts had markers, but none of the markers showed any names or inscriptions.

“The significant number of grave shafts identified in the burial ground suggests the use by a large population associated with the University,” said Benjamin Ford, principal investigator of Rivanna Archaeological Services. “With the exception of students, the largest population of individuals living on Grounds at the University would have been enslaved African-Americans,” at the time the graves were believed to have been filled, in the 19th century.

According to Ford, the burial ground may contain the remains of enslaved and possibly post-Emancipation African-Americans.

“Although it is not unusual to find a stray burial outside of an enclosed cemetery that has been used over a long period of time, the discovery of such a large number of previously unknown burials at the University Cemetery begs the question of how this burial ground became ‘forgotten,’” Ford said.

Established in 1828, the University Cemetery expanded twice – once to the west in the 1860s to accommodate Civil War dead, and once to the east in 1885.

It wasn’t until the 20th century that the cemetery expanded to the north, which was in the direction of the area already possibly serving as the burial ground for University “servants.”

“Concerning the discovery of the new grave shafts, the goal of our committee is to protect the integrity of this site,” said Dr. Dearing Johns, chair of the U.Va. Cemetery Committee and an associate professor of cardiovascular medicine in the School of Medicine. “This will allow prevention of further damage and assure respect for the remains of those buried. In addition, our goal will be to memorialize these graves in as respectful manner as possible.

“There are no plans to excavate deeper or uncover the remains of those buried,” Johns said.

The U.Va. Cemetery Committee makes recommendations concerning the appearance and maintenance of the cemetery and columbarium, determines criteria for eligibility for purchase and burial, and assists in developing guidelines for the administration of the plots and vaults.

The most accurate way of determining the presence of unmarked human burials is to remove topsoil to a depth where the naturally occurring subsoil is reached. During the survey, the surface soils were sometimes as much as 2½ feet deep because the area had previously served as a plant nursery for Facilities Management as well as a place for dumping excess cemetery soils.

During the survey, the topsoil was initially removed mechanically with a backhoe, and then the exposed surface was manually skimmed with shovels and trowels with the help of a Facilities Management landscaping crew.

In order to define the full extent of the burial ground, topsoil was removed from the expansion project area 25 feet beyond the last positively identified rectangular-shaped grave shaft.

Unlike the University Cemetery, which has individual plots in neat rows, the burial ground north of the cemetery has clusters of grave shafts in short rows or small groups, frequently with gaps of 10 to 15 feet between. Almost 20 percent of the grave shafts were small, suggesting the presence of children and infants.

“No grave shafts were archaeologically excavated, nor does the University have any intent to excavate grave shafts,” Ford said.

On Nov. 15, Colette Sheehy, U.Va. vice president for management and budget, appointed an ad hoc committee with the responsibility of recommending appropriate treatment and interpretation of the site. The charge of the Gravesite Commemoration Committee is “to explore alternatives and develop recommendations for appropriately documenting and safeguarding the unrecorded grave shafts and to suggest ways in which the University may memorialize and sign the site.”

The existing University Cemetery Committee will continue to advise the University on future development and expansion of the cemetery and make recommendations concerning its general appearance and maintenance.

“A key factor in our deliberations will be the research report from Rivanna Archaeological Services documenting the findings of the physical investigations, as well as documentary research which is just beginning now that the archaeological survey is winding down,” Hughes said.

It is hoped that census data will help determine how many servants are documented to have been living on Grounds and may have been buried in the cemetery.

“Since there were no clues as to the identity of the persons buried at the site during the physical investigations, the documentary research is particularly important in helping us to understand the meaning of the discovery – and therefore, critical to deciding how best to commemorate the lives of the people buried there,” Hughes said.

Whatever the result of the research and documentation, Martin said the site offers “a wonderful opportunity for preservation, beautification and commemoration.”

After additional archival research and laboratory work, Rivanna Archaeological Services will issue a technical report, documenting their research methods and archaeological findings, and then will make recommendations for future research and preservation of the site. Once the University approves the report, it will go to the Department of Historic Resources for review.

A surveyor has mapped the newly discovered burial area, and the grave shafts and other significant features have been photographically documented.

A camera tethered to a balloon will take a final set of pictures this week with the guidance and assistance of Chris Gist and Kelly Johnston, geospatial information and data services specialists in the Scholars’ Lab at Alderman Library.

For All of Us END_OF_DOCUMENT_TOKEN_TO_BE_REPLACED