University Commemorates Cornerstone Ceremony That Started It All 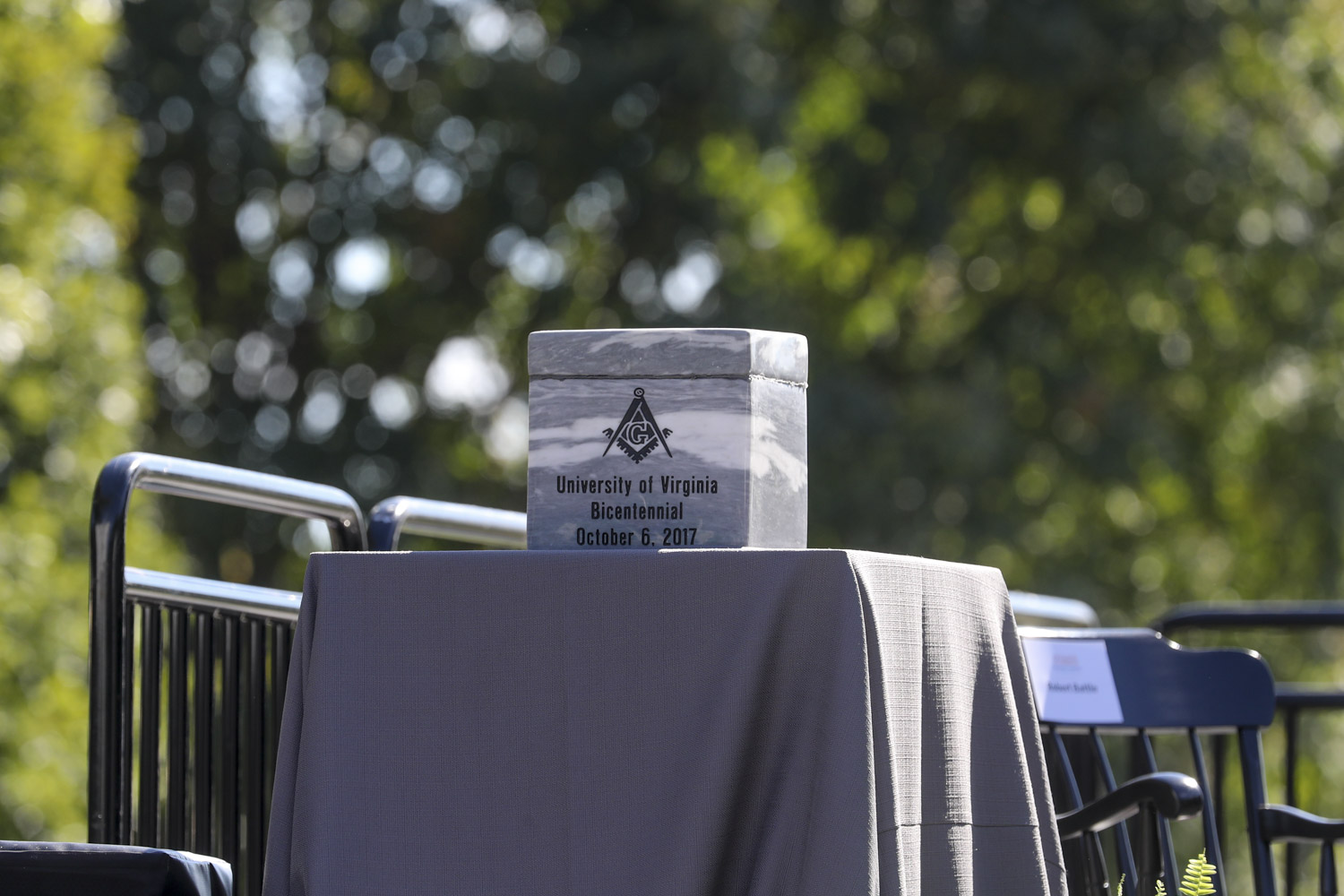 The University of Virginia kicked off its bicentennial celebration Friday afternoon with a ceremony marking the 200th anniversary of the laying of cornerstone for Pavilion VII, the first building on Grounds. The original cornerstone ceremony, on Oct. 6, 1817, was attended by University founder Thomas Jefferson, former President James Madison and then current President James Monroe.

Friday’s ceremony included current and former University officials, Virginia Gov. Terry McAuliffe and representatives of the Widow’s Sons Masonic Lodge. The ceremony was held on a stage between Pavilions IX and X, with the speakers facing the Rotunda, the center of Jefferson’s University, and the audience facing the south hills, the view Jefferson intended from the Rotunda. It opened with students from the UVA Chamber Singers reading quotes from Jefferson on education, followed by an address from Peter Onuf, professor emeritus in the Corcoran Department of History.

Onuf reflected that Jefferson understood if the fledgling republic was going to survive it needed well-informed leaders educated in a place such as UVA. And he said those leaders needed not just to recognize their rights, but to recognize the rights of others. He said while Jefferson believed the earth belonged to the living, the living have a responsibility of stewardship for the coming generations, as the foundation of the future.

Onuf was followed by Mark S, Chapman, worshipful master, and R.W. Clore, stonemason, from the Charlottesville Masons’ Widow’s Lodge Number 60. Chapman recounted Monroe’s involvement with the first cornerstone ceremony, performing a Masonic rite of spreading wine, oil and grain on the cornerstone and and then using a level, a square and plumb to verify that the cornerstone was true. Chapman presented the University with a memorial cornerstone which contained a level, square and plumb, to be opened in 100 years as part of the tri-centennial of the University.

After the Masonic presentation, the UVA Chamber Singers performed “Hail, Columbia,” which was performed at the initial cornerstone ceremony.

Dr. Robert Battle, a Charlottesville native, UVA School of Medicine alumni and co-chair, with Tom Farrell, of the Bicentennial Commission, reminded audience members of the full scope of history, which teaches of exploitation and cruelty as well as heroic deeds.

Battle said Jefferson wanted education to be convenient to the people, but he also said that the early University required the generosity of donors to survive. He said the University stood for religious freedom, with a library at its core, as well as student self-governance and honor.

“This place went from an old field to a UNESCO heritage site,” he said. “But before it was founded it had been home to the Monacan Indians and after it was founded, it was built with slave labor and staffed by enslaved people.”

Battle said the University was charged with the preservation of the histories of those who had been left out, such as women and African-Americans. He cited plans to construct a Memorial to Enslaved Laborers by Brooks Hall.

He thanked the faculty and staff for their contributions to the University that is in “a continuous state of improvement.”

University President Teresa A. Sullivan said the Bicentennial commemoration marked two milestones — the 200th anniversary of the creation of the University of Virginia, and the commencement of its third century as a model of excellence in higher education.

“On this date two centuries ago — Oct. 6, 1817 — Presidents Jefferson, Madison and Monroe presided over the laying of the University’s cornerstone and we pay tribute to that momentous occasion today,” she said. “But even as we celebrate the significance of that day, we remember that the evolution of the University — from dream and concept in the mind of Thomas Jefferson, to reality and presence on the ground where we stand today — required many years of effort.”

She said Jefferson and his colleagues worked hard to overcome numerous challenges, such as raising funds to support the University, seeking legislative approval for its charter, planning the curriculum, hiring faculty and overseeing construction of the Academical Village.

Sullivan said their overcoming hardships is an inspiration today, as people continue the work that Jefferson began 200 years ago, stepping into UVA’s third century.

She said the University was born to meet a pressing need, as the American republic was still in its infancy, and its future vitality was by no means guaranteed. External threats and internal bickering had put the nation’s long-term prospects at risk, and the founders knew that strong leaders would need to rise up to sustain the fragile nation.

“Thomas Jefferson believed then, as we believe today, that educated people would provide the only sure means of preserving hard-won freedoms,” Sullivan said. “Equipping free people with knowledge would give them the tools necessary to resist tyranny and sustain democracy. Knowing these things, Jefferson built this University with a simple purpose — to be a training ground for leaders of the American republic. UVA remains that training ground today.”

Sullivan said the American republic and the University of Virginia were two bold experiments. And while both institutions have flaws and contradictions, they have thrived over the past two centuries.

“In a profound sense, the story of UVA is the story of America,” she said. “Born out of a bold and idealistic vision; risen now to a position of global prominence; imperfect in its history, yet perfectly optimistic as we look to the future. Today, we celebrate a great chapter in our University’s story. Tomorrow, we will begin to write the story’s next chapter for ourselves and for future generations that will follow us here.”

Following Sullivan, several perspectives of the University were presented by Dr. Marcus L. Martin, vice president and chief officer for diversity and equity, representing the faculty; UVA President Emeritus John T. Casteen III, representing the alumni; and Bryanna Miller, the student member of the Board of Visitors. 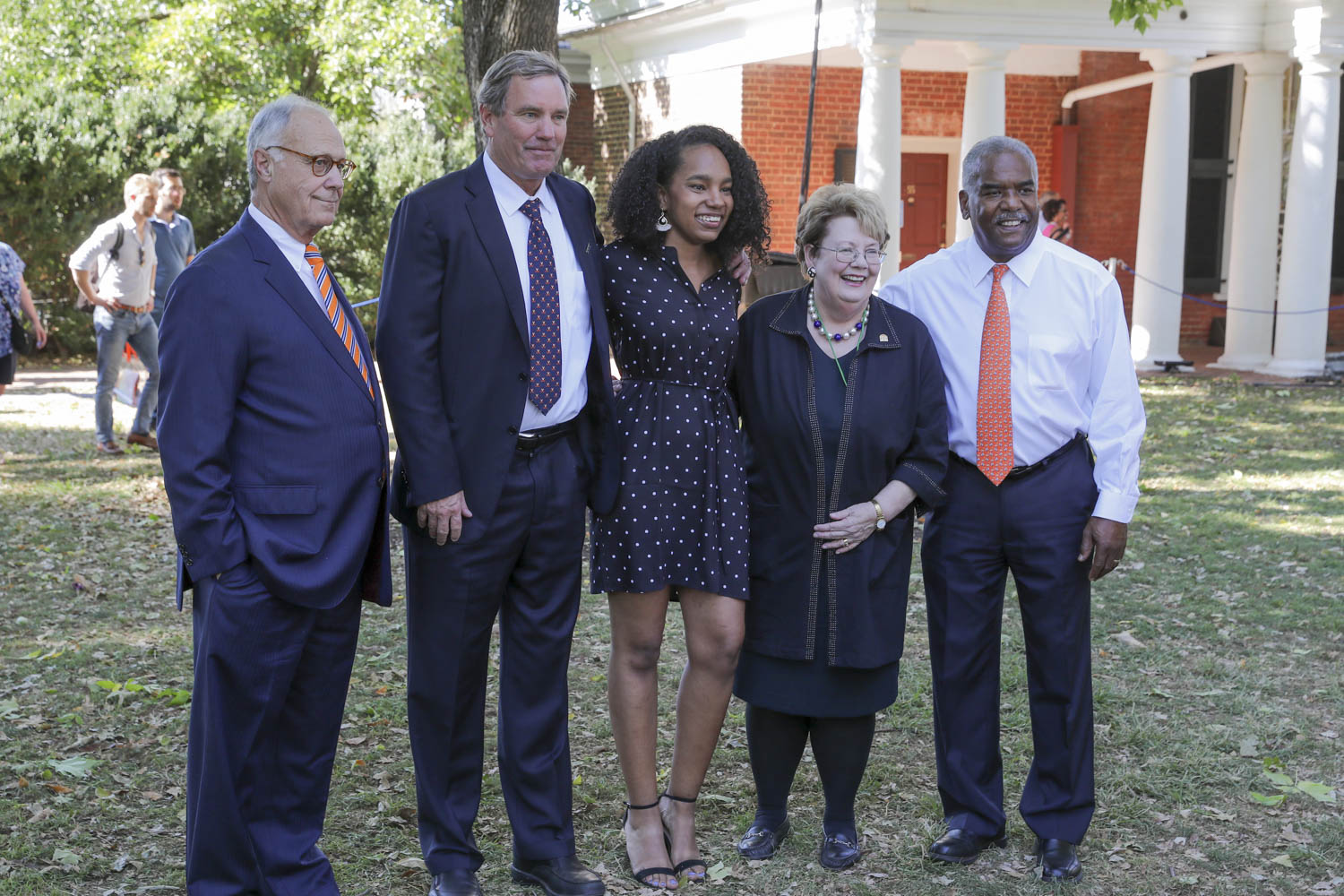 Martin, reflecting on his childhood in the mountains of Virginia in the segregated 1950s and 1960s, noted that attending UVA was not an option for him, though he was the first generation in his family to attend college.

Martin also noted that the University was built with work from enslaved people, including Peyton Skipwith, Henry Martin, Isabella and William Gibbons, and many others.

“They were resilient, despite involuntary servitude, broken families and the disparity of power and privilege,” Martin said. “Not being free to express their own giftedness, the enslaved were the cornerstone, the first stone in the construction with all other stones set in reference to it, thus determining the stability of the entire structure.”

Martin said he came to the University in 1996, the first black chair of the clinical department in the School of Medicine, and he has engaged in the emergency care of adults and children, delivering babies, and responding to disasters.

He cited Dr. Robley Dunglison, one of the first eight, all white male faculty at UVA, the professor of anatomy and medicine who served as personal physician to Thomas Jefferson. He was at Jefferson’s bedside the day he died.

“Dunglison administered to Presidents James Madison and James Monroe as well during his nine-year tenure at UVA,” Martin said. “His patients and students were quite homogenous. I took an oath to practice the art of medicine not permitting diverse human variations to interfere with my duty to patients.

“Long after the first eight white males were hired, women and minorities were included within the faculty ranks and the numbers are growing,” Martin said. “Some of our diverse faculty have given three and four decades of their lives in service to UVA. They are cornerstones.”

Martin cited his colleagues on the platform and many in the audience as modern-day cornerstones, “carrying the weight and working synergistically to ensure the best future for our university.”

Casteen, in his remarks, recounted his school days, his act of faith in coming to UVA and how he compared to his classmates. 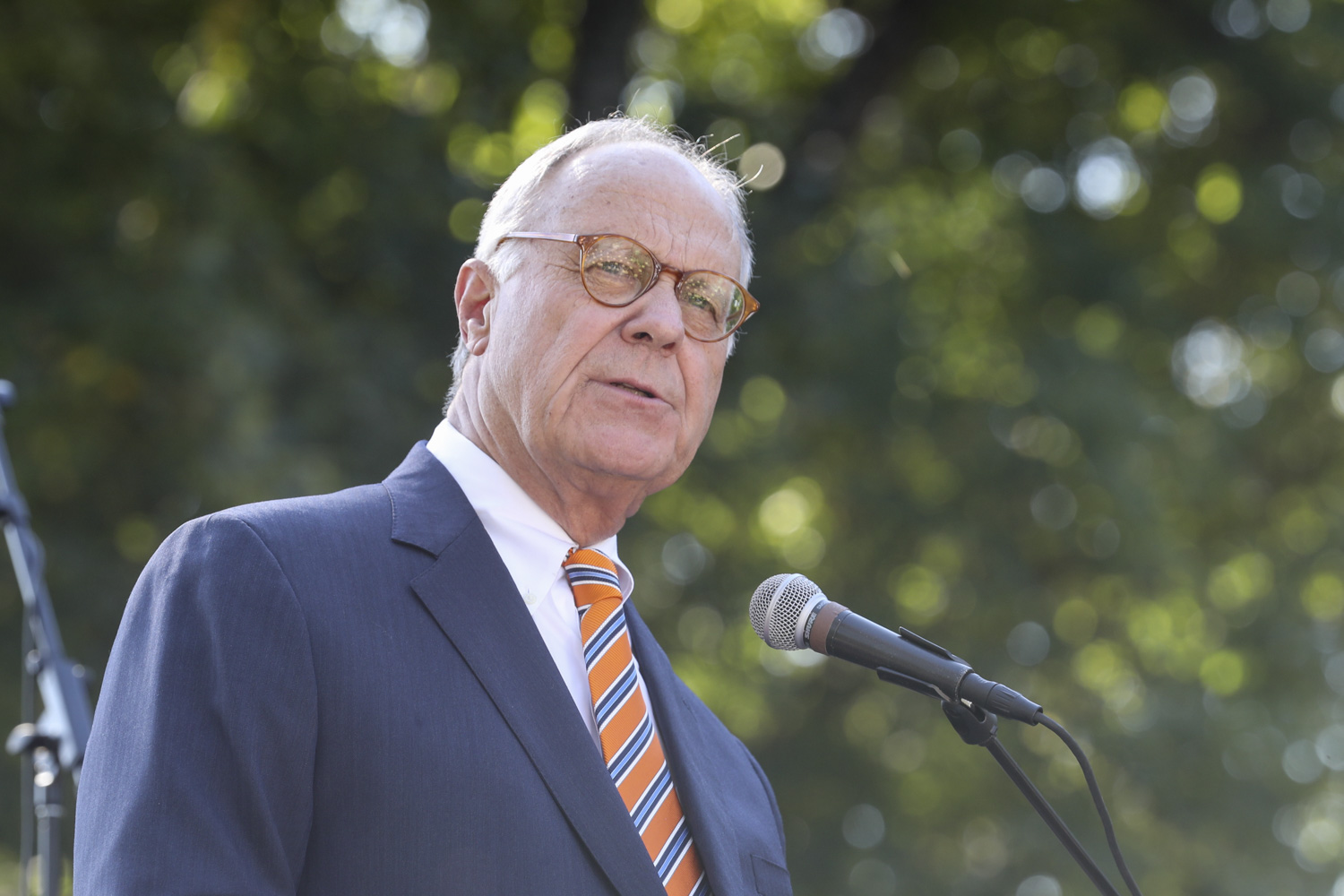 “In the fall of 1961, I imagined that my classmates had been star students in the best schools, that essentially everyone understood, got it, long before I did,” he said. “A good bit of that was true. My first semester was difficult. My grades were terrible. At the end of the semester, I got the ‘redouble-your-efforts’ letter from the dean.”

He said he did redouble his efforts and, with effort, he took to the work and encountered faculty members who inspired and encouraged him. He said that each generation moves on, evolves, accommodates new ideas.

“We make or yield space for new people – people like and unlike us, African Americans, women, foreign students, people who have changed – saved – the University as a community and as a public treasure, again and again,” Casteen said. “Their distinctive personal strengths, identities, personalities, determination guarantee the durable vitality of this place where learning, knowledge, is the currency of human freedom.”

He said the alumni treasures the University and its traditions and cherishes the place where they became adults.

“Each of us treasures this place for compelling us to ponder imponderables: much that is beautiful and true here was made by the hands of enslaved Americans; our founders, great and true though they were, harbored profoundly human flaws; our own notion of history is inadequate and incomplete,” he said. “Our obligation to learn is vast.”

He said for the alumni the University would always be a home.

“Women and men, black and white, we learned the hard truths here – that beauty exists in both asymmetry and symmetry, that what we do not know is ours to learn, that the phrase ‘all men are created equal’ embraces us all, women and men, and that our common treasure is that indeed we have drunk from the cup of knowledge and fraternized here – become sisters and brothers, and in the process, had a really good time,” he said.

Casteen introduced Bryanna Miller, the student member of the Board of Visitors, an Echols Scholar, history major and first generation college student from Lewes, Delaware. She has served as president of the Black Student Alliance; a college representative on the Student Council; an Honor Audit Commission member; Committee on Undergraduate Admission member; a Fellow of Meriwether Lewis Institute for Citizen Leadership and a Lawn resident. 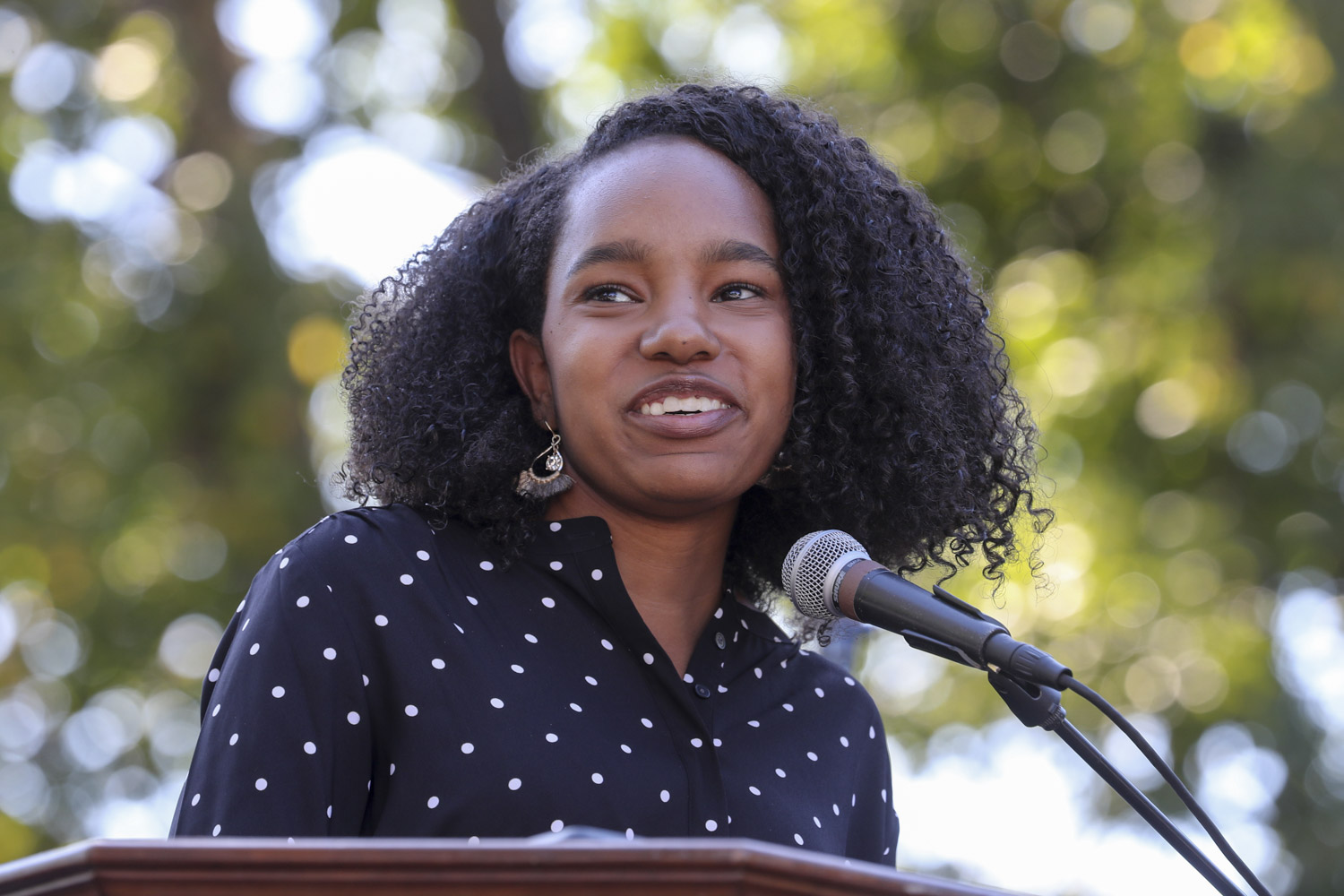 Miller, citing what the University has accomplished in the past 200 years, said she tried to imagine 100 years into the future. She predicted the University would be more diverse but still producing ideas that would change the world. But to achieve this, she said, the students would need to walk hand in hand with the history that surrounds them every day.

“We need the courage to face the future,” she said. “We have the tools and a great institution. We need the limitless courage of the three founders who showed up to lay the cornerstone.”

She said previous generations of students had shown courage to create the honor code, protest wars and fight injustice.

“We are the seeds of the future and we have a role in planting those seeds,” she said. “There is no limit to what students here can accomplish.”

Frank M. “Rusty” Conner III, rector of the Board of Visitors, unveiled a plaque to be mounted on the wall of Pavilion VII to mark the laying of the cornerstone. 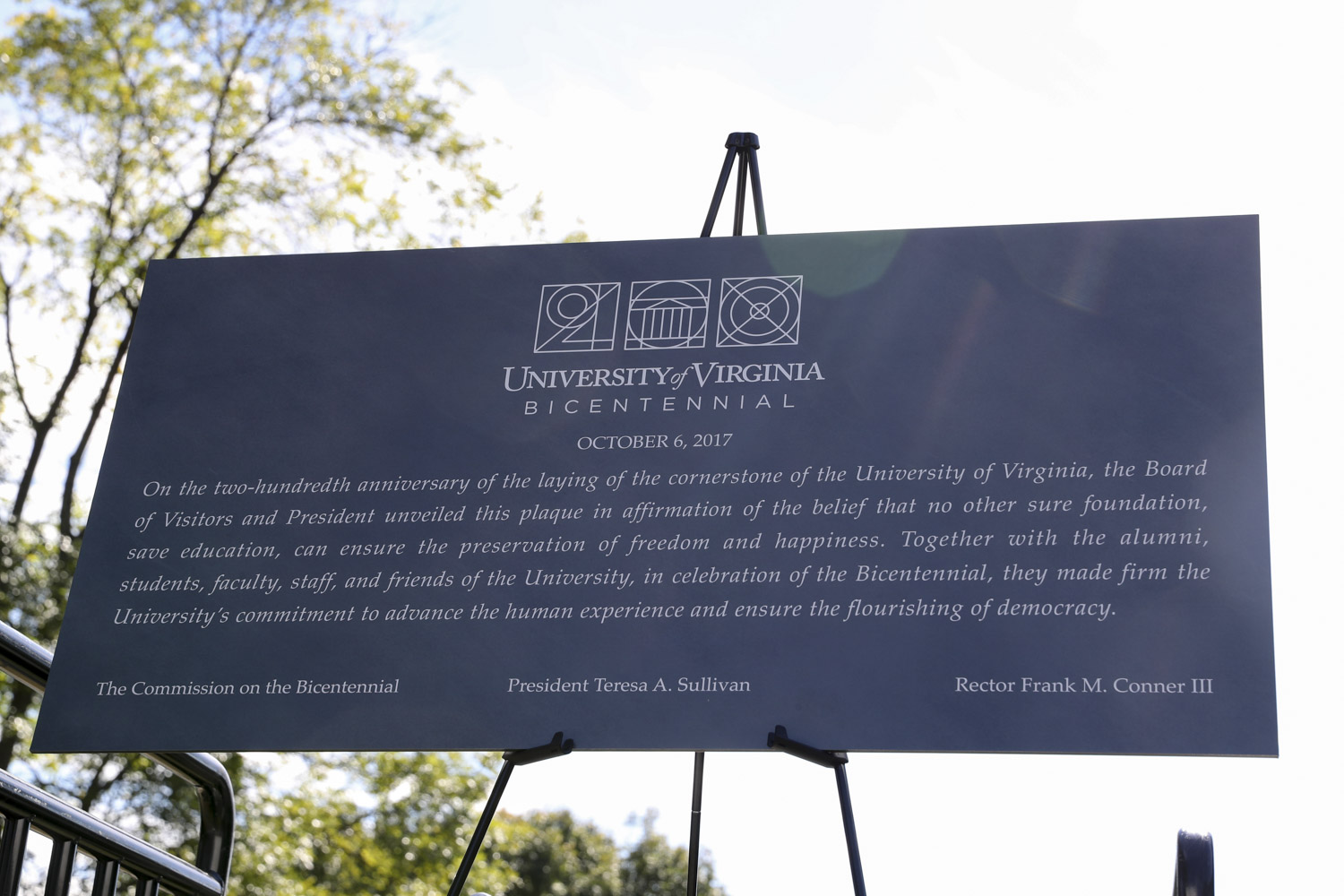 Conner said the plaque “serves as our recognition, in 2017, of the enduring relevance of our founders’ vision of creating a new kind of university, a great public university dedicated to the concept of the illimitable freedom of the human mind.”

The ceremony closed with the UVA Chamber Singers performing “Hail, Virginia, All Hail” and “The Good Old Song,” at which point the crowd rose to its feet and sang along.

What’s Next for UVA’s Class of 2022? END_OF_DOCUMENT_TOKEN_TO_BE_REPLACED