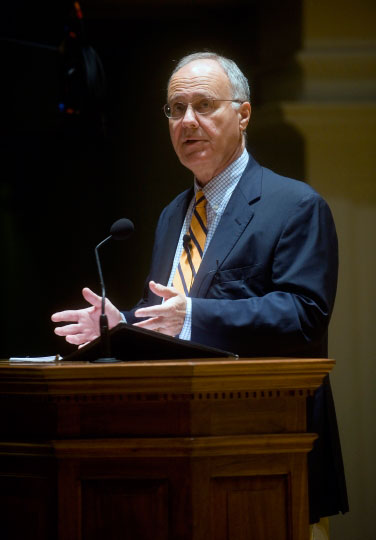 The University of Virginia Oral Histories project provides the public open access to the inner workings of the University over the past half-century.

“The project commenced with the arrival of University President Teresa A. Sullivan to the Grounds,” said U.Va.’s protocol officer, Kari Evans, who is also leading the planning efforts to mark the University’s 2019 bicentennial. “She realized that this was a unique opportunity to capture first-person recollections of the last five decades at the University. These four individuals offer perspectives not available anywhere else, as well as provide an important window to U.Va.’s history.”

Casteen first came to the University as an undergraduate student in 1961. He grew up in a suburb of Portsmouth with parents who championed public education. Their son, a product of the public school system during the era of Massive Resistance – a movement to prevent the racial integration of schools – would go on to earn three degrees from the University, teach at community colleges and public universities, direct admissions at U.Va., serve as secretary of education for the commonwealth of Virginia, lead the University of Connecticut for five years and serve as president of the University of Virginia for 20 years.

Among his greatest legacies were his efforts to bring more diversity to Grounds, in the ranks of both the faculty and student body, first while serving as U.Va.’s dean of admission from 1975 to 1982 and later when he returned as University president in 1990.

Prior to his inauguration as U.Va. seventh president, Casteen foresaw the significant decrease in funding that the commonwealth would provide to its public institutions of higher education. In 1990, state revenues made up approximately 23 percent of U.Va.’s total budget; by 2013, that percentage had dropped drastically to approximately 6 percent.

Casteen suggested that increased fundraising efforts would need to close that gap for the University to survive as a top provider of education and research.

Fast-forward 20 years: The University completed one capital campaign that raised $1.43 billion, then followed it with a second that exceeded $3 billion. Robert D. Sweeney, senior vice president for University Advancement, led both. The University of Virginia Investment Management Company is essential to managing money at this scale.

“John had this ability to be able to see well beyond what any of us could see – in terms of where this university should go and where it should be in the year 2020,” said Gordon C. Burris, one of Casteen’s top aides, during his oral history. “Much of it related to where we are today and what we’re doing and why we do it.”

Leonard Sandridge grew up in Crozet, a small town about 10 miles west of Charlottesville. Known for his tireless work ethic, Sandridge has worked six to seven days a week since he was 10 years old. His durability continued through his 44 years at the University, where he was legendary for his ability to work 24 hours straight and through long days for vast stretches of time.

One of Sandridge’s memories as a small child was driving with his father past the Rotunda. “That’s the University of Virginia, but the people that go there are better than we are,” his father said.

“I grew up thinking that this was a place I could never get , never do,” said Sandridge during his oral history.

Sandridge did indeed arrive at U.Va., starting in February 1967 as an internal auditor and officially retiring 44 years later as executive vice president and chief operating officer (though he continues to serve the University as special adviser to the Board of Visitors).

He worked under five University presidents – Edgar Shannon, Frank Hereford, Robert O’Neil, Casteen and Sullivan – but it is the ever-present and steady Sandridge for whom students  created a bumper sticker, “I Brake for Leonard Sandridge,” an homage to his frequent sightings on and around U.Va.’s Grounds as he strode purposefully from appointments to meetings to speaking engagements.

He also reflects on a seminal leadership lesson learned from the collapse of a pavilion balcony on the Lawn during the 1997 Final Exercises, which resulted in the death of one person and injured 19 others.

“There are three takeaways that I got from that event,” Sandridge said. “Acknowledge that there’s something bad that happened, that you shouldn’t have let it happen, and it’s not going to happen again.” This takeaway echoes the importance that Sandridge places on addressing issues head-on and doing “what’s right.”

Born in Wilmington, Delaware, Gordon Burris was raised by his mother after his father passed away when Burris was 6 years old. Growing up in the YMCA fostered his love for sports and health.

He came to the University in 1965 to pursue a master’s degree in physical education, in addition to serving as assistant track coach and teaching P.E. (U.Va. had a physical education requirement until 1970). By 1967, when he completed his degree, Burris had been named head soccer and tennis coach.

He went on to work with Lou Onesty, former U.Va. track coach, and Gilbert Sullivan, former director of the U.Va. Alumni Association. He also served as a constant travel companion to Casteen during his time as dean of admission and president.

Arguably Burris’ greatest long-term contributions to the University stemmed from his roles as a fundraiser and relationship-builder. He was responsible for developing the legacy admissions, Jefferson Scholars, Parents Committee and Virginia 2020 programs.

“Gordon’s influence on what U.Va. has become in consequence of the support, financial and other, that came in the course of the two capital campaigns of 1992 or so through 2010 (and after) would be hard to exaggerate,”  said Casteen in his oral history.

“He has worked closely with Bob Sweeney to identify prospective donors and other backers, contributed to the arguments made for U.Va., coached me and others as we have prepared for our work, and perhaps above all, stayed in close personal contact with (literally) several hundred, perhaps thousands, of people. He is the human face and often conscience of the University in daily contact. All of us are in Gordon’s debt.”

“The Gilliams have been coming here since 1829, which was four years after the University opened,” said Sandy Gilliam as he begins his oral history.

After graduating from the University in 1955 with a degree in history, Gilliam served in the counterintelligence corps of the U.S. Army and was involved in spy games of the early Cold War era. Upon returning to the States. in 1958, Gilliam completed coursework at U.Va.’s graduate school and then turned his attention to the Foreign Service, where he completed tours of Israel and Chad.

After serving in the administration of Virginia Gov. Linwood Holton, Gilliam found his way back to the University in 1975, where he worked for Presidents Hereford, O’Neil, Casteen and Sullivan. During his 39 years at the University, Gilliam served as assistant to the President, secretary to the U.Va. Board of Visitors and University history and protocol officer.

In a way, it was coeducation that cemented his return to the University. After initially accepting Hereford’s offer to come back to U.Va. as his special assistant, Gilliam had cold feet. He feared his return to his alma mater would be an attempt to “recreate a past” from his undergraduate years “that cannot be recreated” – a feeling he had when he enrolled in graduate school. As a result, he requested a meeting with Hereford to address his doubts.

In his oral history, Gilliam explained, “I got down here and it was gray and gloomy. I parked my car in the alley behind the president’s office, which in those days was on the Lawn. The room that I had lived in as a fourth-year student was right there, two doors up from the president’s office. I came up the steps from the alley and walked past the door of my old room. The door opened and the girl who obviously lived there walked out.”

This collision of Gilliam’s past, present and future erased his doubts.

Coeducation had only existed at U.Va. for four years at this point and a woman was already living on the Lawn. “The girl who obviously lived in my old room – I saw her and I thought that was right and proper,” he said.

The University of Virginia had changed for Gilliam – for the better.

About the U.Va. Oral History Project

The oral histories are available to the public through Libra, the University’s online archive for U.Va. scholarship. The original four-volume set is in the University Archives at the Albert and Shirley Small Special Collections Library.

Karin Wittenborg, University librarian at the time the project started, and her staff selected the interviewing company, History Associates Inc. of Rockville, Maryland.

Netflix to Add Ads. Why This Could Be a ‘Game-Changer’ for Your Viewing Experience END_OF_DOCUMENT_TOKEN_TO_BE_REPLACED

What’s Next for UVA’s Class of 2022? END_OF_DOCUMENT_TOKEN_TO_BE_REPLACED