University of Virginia Ready for This Weekend’s 185th Final Exercises 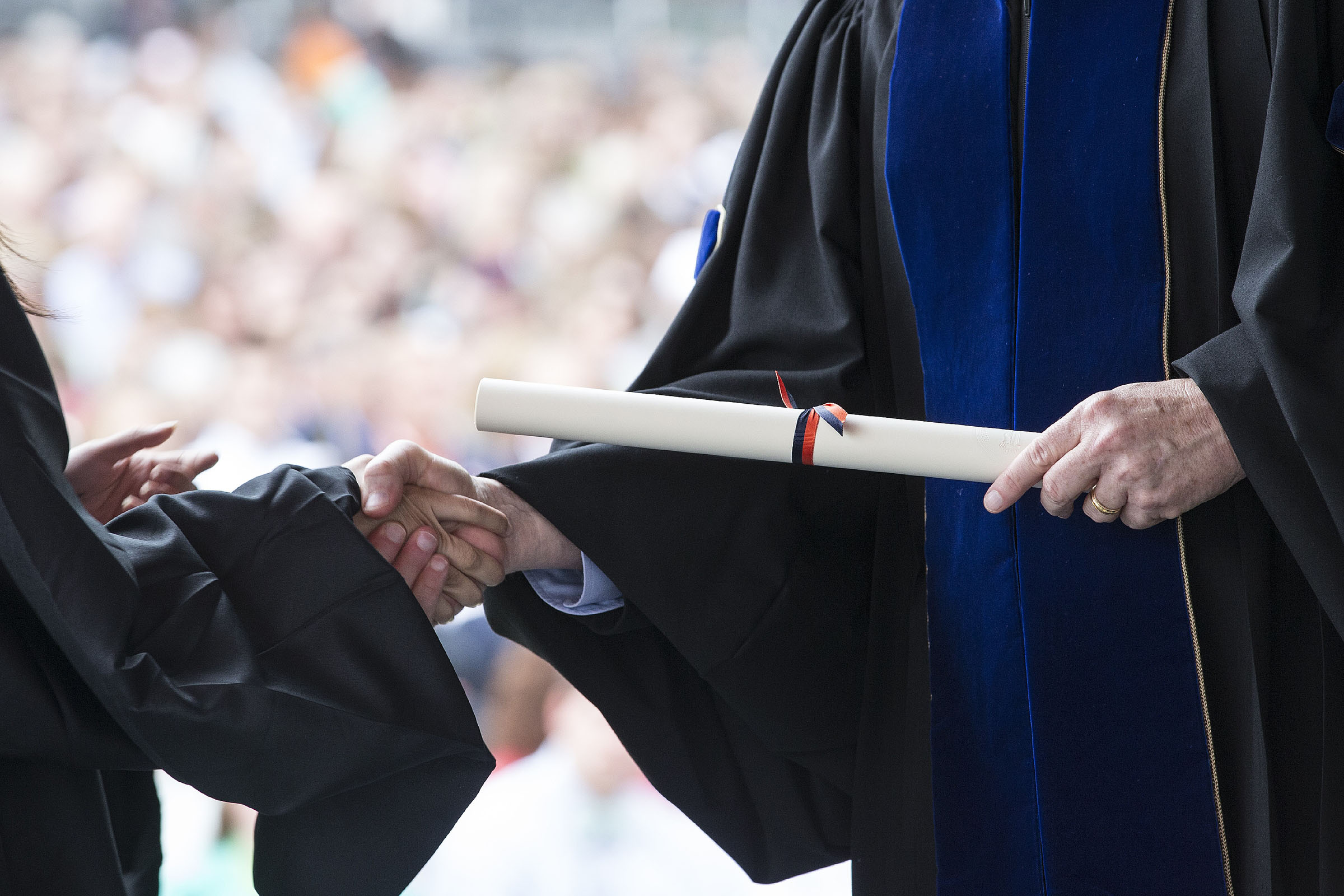 Teresa A. Sullivan will preside over her fourth Final Exercises as president of the University of Virginia this weekend, welcoming between 30,000 and 35,000 people to Grounds. Sunday is the 185th edition of the University’s ceremony honoring graduating students.

For the graduates, their families and friends, the weekend promises the usual visual and emotional appeals – the lush and inviting Lawn, the colorful academic procession of faculty and students, the iconic Academical Village backdrop for photos and videos.

Students who have earned undergraduate degrees in fewer than four years will wear special orange academic stoles, a gift from the Office of the President.

Denver Broncos quarterback Peyton Manning will deliver remarks at Saturday’s Valedictory Exercises, and U.S. Secretary of the Navy Ray Mabus is the keynote speaker for Final Exercises on Sunday.

Manning is the only five-time winner of the National Football League’s Most Valuable Player award and founder of a charitable organization that has donated more than $6.5 million in grants and programs to youth-based community organizations. His wife, Ashley, is a 1997 graduate of U.Va.’s McIntire School of Commerce.

Manning founded the PeyBack Foundation in 1999 “to promote the future success of disadvantaged youth by assisting programs that provide leadership and growth opportunities for children at risk.” The foundation supports youth-based community organizations in Colorado, Indiana (where he began his NFL career with the Indianapolis Colts), Tennessee (where he starred at the University of Tennessee) and Louisiana (his home state).

Additionally, Manning maintains a strong relationship with the former St. Vincent’s Children’s Hospital in Indianapolis, which in 2007 was renamed the “Peyton Manning Children’s Hospital at St. Vincent.” He started the Peyton Manning Scholarship program at the University of Tennessee that has honored 20 incoming students in the past 16 years for their academic achievement, leadership and community service. He is a member of the Board of Visitors for the University of Tennessee’s College of Arts and Sciences, the National Football Foundation Scholarship Athlete Advisory Board and the American Red Cross National Celebrity Cabinet.

Though Manning has a reputation for being exacting on the football field, he has also shown a lighter side. He hosted a well-received episode of “Saturday Night Live” in March 2007, and is a master pitchman in humorous television advertisements, often appearing alongside his younger brother, Eli, the star quarterback of the NFL’s New York Giants.

Mabus is a former governor of Mississippi and ambassador to Saudi Arabia. Since beginning his tenure in 2009 as the top civilian official in the U.S. Navy, Mabus has taken on several goals: improving the quality of life of sailors, Marines and their families; decreasing the department’s dependence on fossil fuels; and revitalizing the Navy’s shipbuilding program. In 2012, he introduced the “21st Century Sailor and Marine” initiative, which aims to build and maintain the most resilient and ready force possible.

Mabus has directed the Navy and Marine Corps to obtain at least 50 percent of their energy from alternative sources by 2020. As part of that ambitious goal, the Navy last year demonstrated the Great Green Fleet, a carrier strike group in which every ship and aircraft operated on nuclear energy, biofuels and other alternative energy sources.

Mabus is responsible for a U.S. Navy that employs almost 900,000 people, commanding a budget of more than $170 billion. As leader of the world’s sole global navy, Mabus has traveled nearly 715,000 miles to more than 95 different countries to maintain and develop relationships with other national and international leaders and to visit with sailors and Marines deployed or stationed around the world.

Increasing the size of the U.S. naval fleet and protecting the industrial base have been top priorities during Mabus’ tenure. Under Mabus, the Navy has gone from building fewer than five ships a year to having more than 40 ships under contract.

In addition, Mabus was appointed by President Obama in June 2010 to prepare the long-term recovery plan for the Gulf of Mexico following the Deepwater Horizon oil spill. Mabus’ report drew bipartisan support, and Congress enacted many of its recommendations as the Restore Act. The law included a fund to aid in the Gulf Coast’s recovery by distributing 80 percent of any civil penalties awarded as a result of the damage caused by the disaster.

Before his appointment as Secretary of the Navy, Mabus served as governor of Mississippi from 1988 to 1992, the youngest individual elected to that office in more than 150 years. Mabus was ambassador to the Kingdom of Saudi Arabia from 1994 to 1996 and later was chairman and CEO of a manufacturing company.

Both Valedictory and Final Exercises will be livestreamed at www.virginia.edu/majorevents/live.

In the case of inclement or severe weather on Saturday, Valedictory Exercises will be moved from the Lawn to John Paul Jones Arena. Tickets will not be required. The doors will open at 9 a.m.

If weather is severe Sunday, there will be a central convocation in the John Paul Jones Arena for undergraduate degree candidates and Master of Teaching degree candidates only. The doors will open at 7:30 a.m.; faculty and students should arrive at the arena by 9:30 a.m. Only guests with tickets will be allowed entry. Graduate and professional students will go to the designated severe-weather sites for both degree conferral and diploma distribution. Faculty and students should arrive 30 minutes before their respective ceremony.

Public parking will not be available on Central Grounds. McCormick Road will be closed from University Avenue to the McCormick Road Bridge from 6 a.m. to 5 p.m. on Sunday.

Allow extra time due to increased pedestrian and vehicular traffic.

Fall Is in the Air on Grounds END_OF_DOCUMENT_TOKEN_TO_BE_REPLACED