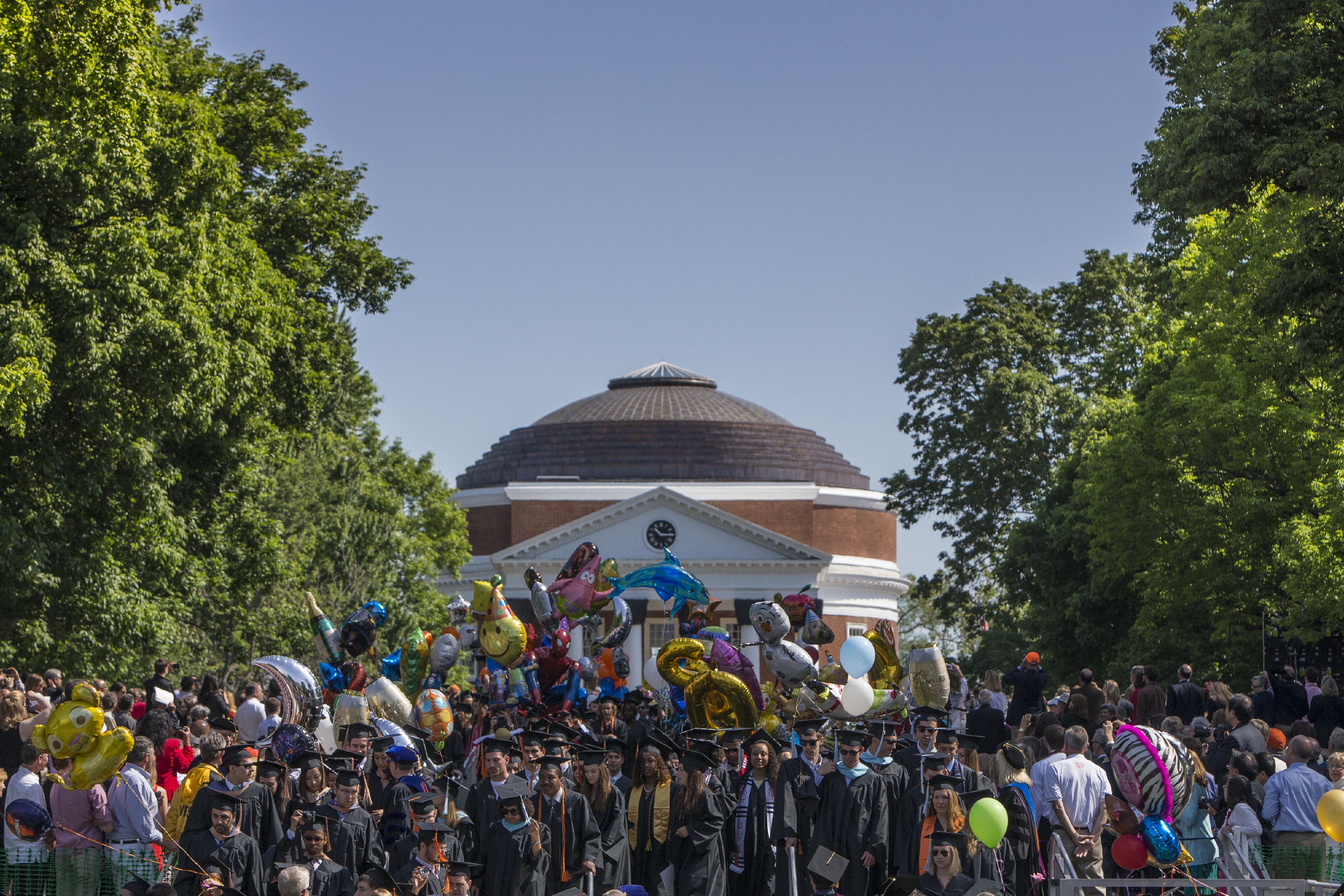 University of Virginia President Teresa A. Sullivan will preside over her fifth Final Exercises this weekend, with between 30,000 and 35,000 people expected to attend. The University’s 186th commencement celebration will be far from routine, however.

Due to the ongoing restoration of the Rotunda, the University will hold two Final Exercises ceremonies this year. The first, on Saturday, will honor students graduating from the College and Graduate School of Arts & Sciences. The second ceremony on Sunday will honor graduates of the University’s 10 other schools.

Each ceremony will proceed according to custom, with faculty and students processing down the Lawn in a colorful, joyous parade, cheered by family and friends. Graduates will assemble in the Rotunda, Poe and Green Alleys and on the upper tier of the Lawn in preparation for the procession.

Students who earned their undergraduate degree in fewer than four years will wear orange academic stoles given to them by the Office of the President.

Helms rose to fame with his political comedy and satire during a five-year stint on “The Daily Show with Jon Stewart,” followed by a seven-year run portraying Andy Bernard on NBC’s hit comedy “The Office.” He landed his biggest feature film hit to date in 2009 when he co-starred with Bradley Cooper and Zach Galifianakis in the first installment of “The Hangover” franchise, which won a Golden Globe Award for Best Motion Picture - Comedy or Musical. In his next film, “Vacation,” Helms will play Rusty Griswold, son of Clark Griswold from National Lampoon’s beloved “Vacation” series.

Helms is the co-founder of the production company Pacific Electric Picture Co., which develops and produces television shows and feature films. He sits on the board of trustees at his alma mater, Oberlin College, and on the advisory board for Education Through Music-Los Angeles, which funds and provides curricular materials for music education in the city. He has also worked closely with charities including Malaria No More, Artists for Peace and Justice and Stand Up To Cancer.

Helms is a bluegrass enthusiast and continues to play banjo in The Lonesome Trio bluegrass band, which he formed at Oberlin College more than 20 years ago. His musical roots also connect him to U.Va. During a 2012 episode of “The Office,” Helms’ character sang with a U.Va. men’s a cappella group, the Hullabahoos. Halsted Sullivan, a writer and producer on “The Office,” is a 1989 U.Va. graduate and a founding member of the Hullabahoos.

McAuliffe was sworn in as Virginia’s 72nd governor in January. Since taking office, he has prioritized Virginia’s economic development, working to diversify the economy and encourage more businesses to locate operations in the commonwealth. Additional policy priorities include investing in transportation infrastructure, increasing research and development in Virginia, education reform and a health care plan, A Healthy Virginia, that aims to expand health care access for more than 200,000 Virginians.

Prior to assuming the governorship, McAuliffe was a veteran businessman with experience in real estate development, home building, Internet venture capitalism and banking, serving as chairman of the board at the Federal City National Bank in Washington, D.C.

McAuliffe has long been a significant player in the Democratic Party. From 2001 to 2005 he served as chairman of the Democratic National Committee. He also co-chaired President Bill Clinton’s 1996 re-election campaign and chaired Hillary Clinton’s first presidential campaign in 2008. His memoir, “What a Party! My Life Among Democrats: Presidents, Candidates, Donors, Activists, Alligators and Other Wild Animals,” was based on these experiences and became a New York Times bestseller.

McAuliffe’s keynote address will fulfill a long-standing tradition at the University of inviting Virginia’s governor to speak at Final Exercises during his time in office.

Bruner is the eighth dean of U.Va.’s Darden School of Business and will complete his 10-year tenure at the end of this academic year. Under his leadership, Darden has consistently been listed among the best business schools in the world, currently ranked as the No. 3 global MBA program by The Economist. In 2011, CNN Money, Fortune, and Poets and Quants each honored Bruner as Dean of the Year, in part for his work as the chairman of a task force on the globalization of management.

Among business school deans, Bruner is recognized for his innovative approach to social media and technology. He is an avid blogger, often discoursing on education philosophy, current events and favorite books. He also led Darden’s foray into online education, including several massive open online courses enrolling more than 600,000 students.

Prior to his appointment as dean, Bruner had been a faculty member at Darden for 23 years, specializing in finance and management. As a financial economist, he is best known for his research on mergers and acquisitions, corporate finance and financial panics. He has authored or co-authored more than 300 case studies and several books, including “Deals from Hell,” “Applied Mergers and Acquisitions” and “The Panic of 1907: Lessons Learned from the Market’s Perfect Storm.”

Bruner’s commencement address will mark one of his last major public appearances before he transfers the deanship to Scott Beardsley, who will begin his term as Darden’s ninth dean on Aug. 1. Beardsley is currently a senior partner of McKinsey & Company, where he leads learning and leadership development for all McKinsey professionals.

All ceremonies will be livestreamed at www.virginia.edu/majorevents/live.

If inclement or severe weather plans need to be implemented for Final Exercises, the University will make an announcement on local radio stations, the University’s home page, www.virginia.edu, and the Office of Major Events’ website, Twitter account and Facebook page. Attendees can also sign up for text message alerts here.

In the case of inclement or severe weather on Friday, Valedictory Exercises will be moved from the Lawn to John Paul Jones Arena, with an announcement made no later than 1 p.m. Seating will be on a first-come, first-served basis.

If the weather is severe on Saturday or Sunday, Final Exercises will be moved to the John Paul Jones Arena and all school and department ceremonies will be held indoors. Graduating students should arrive at the arena by 9:15 a.m. and faculty should be assembled by 9:45 a.m. Only ticketed guests will be allowed entry.

Inclement or severe weather plans for Saturday and Sunday will be announced no later than 8 a.m. each day.

For Friday’s Valedictory Exercises, guests may park at John Paul Jones Arena and ride a shuttle to Central Grounds.

Limited paid parking will be available at the Emmet/Ivy Parking Garage and the Central Grounds Parking Garage for all three days, with no shuttle service provided. More information about parking, including shuttle bus routes and pick-up and drop-off locations, is available here.

Public parking will not be available on Central Grounds. McCormick Road will be closed from University Avenue to the McCormick Road Bridge from 2 p.m. to 7 p.m. on Friday and 7 a.m. to 4 p.m. on Saturday and Sunday.

Allow extra transit time for all events due to increased pedestrian and vehicular traffic.

For All of Us END_OF_DOCUMENT_TOKEN_TO_BE_REPLACED