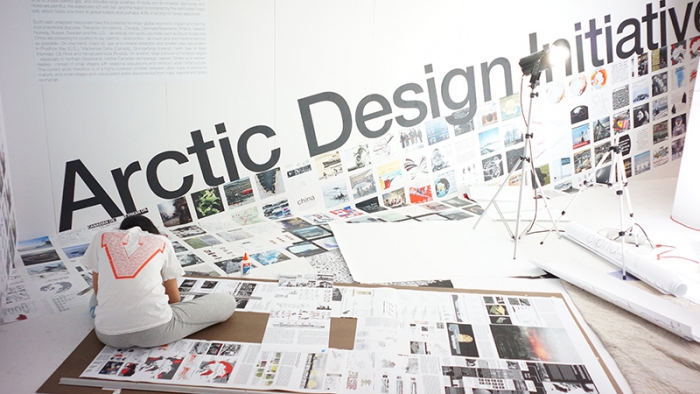 Of the places on earth least likely to be developed, the Arctic would have to be at or near the top of the list. But that’s not the case, according to a design initiative under way at the University of Virginia School of Architecture, which includes an exhibition on display through Feb. 15.

U.Va.’s Arctic Design Initiative says development of this northernmost frontier has already begun and expansion is the next step.

Matthew Jull, an associate professor of architecture, and Leena Cho, a lecturer of landscape architecture, began their Arctic research six years ago while in Rotterdam and brought the infant project to U.Va in the fall of 2012. They have since invited students to design for the unexamined impacts of the Arctic, creating a network of designers interested in exploring a new frontier. Through design studios, independent studies and seminars led by Jull and Cho, the initiative includes students at different levels in their academic careers.

The initiative’s focus is unique in that it is not just design-based, but also considers the impact of environmental, political, economic and cultural trajectories that remain disconnected by most designers. For Jull, who began his career as a research scientist before shifting to design, the connectivity between these various fields is inevitable.

“There has never been a concentrated effort to bring [natural and social sciences] together [in the Arctic],” he said. “That is something that is a hallmark of our work.”

The initiative recognizes that “design is rooted in interdisciplinary work – sharing different thoughts and perspectives,” Cho said. As a result, the initiative has expanded to other schools within U.Va.

Howie Epstein, an environmental sciences professor, has contributed to the initiative, and John Moore, a professor at the School of Law, has offered his expertise.

The initiative is more than conceptual collaboration, Cho said. “We’re bringing people together to interact with them and share our research, and also see how that begins to give specific input with design.”

The initiative is also a part of the Research Coordination Network on Arctic Urban Sustainability, funded by the National Science Foundation. The network includes collaboration with The George Washington University department of geography and the Elliot School of International Affairs. The collaboration “can bring ideas on how designers can act within the framework of issues that are not design-specific from the start,” Jull said.

With such widespread interest, why the Arctic?

“The north is the new frontier,” Jull explained. “We see the Arctic as emerging as this place of climate change and globalization to big-topic issues that are impacting the Arctic specifically. It was sort of out there and distant, but now nations are jockeying for positions to claim areas. Sovereignty and natural resources are all at stake.”

For designers, the Arctic is a place of extremes. “These environments are interesting to explore,” Jull said. “How are cities designed in this extreme environment?”

The extreme challenges are not just found in the initiative’s design proposals, but also in the attempts “to redesign the way the Arctic is being talked about from a design prospective,” Cho said. The initiative aims to challenge designers to look at regional characteristics and create fertile ground for designs.

“Our goal is to reveal the Arctic as a place of unexpected qualities,” Jull said.

Their research has resulted in their first public project, an exhibition in the Architecture School’s Elmaleh Gallery that displays a “snapshot of collective research” that the initiative has been examining and designing since 2012.

Organized into four parts – the strip, atlas, wall and library – the exhibition provides an immersive experience for visitors.

Upon entering, the “strip” introduces visitors to the arctic with a collage of information, maps and images that guides them around the room.

The “atlas,” according to the project’s website, gives visitors visual reference for the Arctic with “current political, industrial, environmental and urban hotspots in the circumpolar north.” Jull noted that, “the Arctic Atlas puts together all the areas of development and contentions between the Arctic nations.”.

The “wall” presents students’ research projects, such as the “Filtered Fleet,” a plan that recycles Russian ships as repositories for moss used to filter waterways in the urban Arctic.

Lastly, the “library” offers a collection of books, magazines and other artifacts on the Arctic to enhance the visitor’s experience.

The Arctic Design Initiative Exhibition will remain on display at the Elmaleh Gallery through Feb. 15.

The U.Va. Center for International Studies and the Architecture School faculty grant provide funding for the ongoing initiative that hopes to take students to the Arctic in the future and plan a symposium with Arctic experts to expand the conversation about design.

What’s Next for UVA’s Class of 2022? END_OF_DOCUMENT_TOKEN_TO_BE_REPLACED