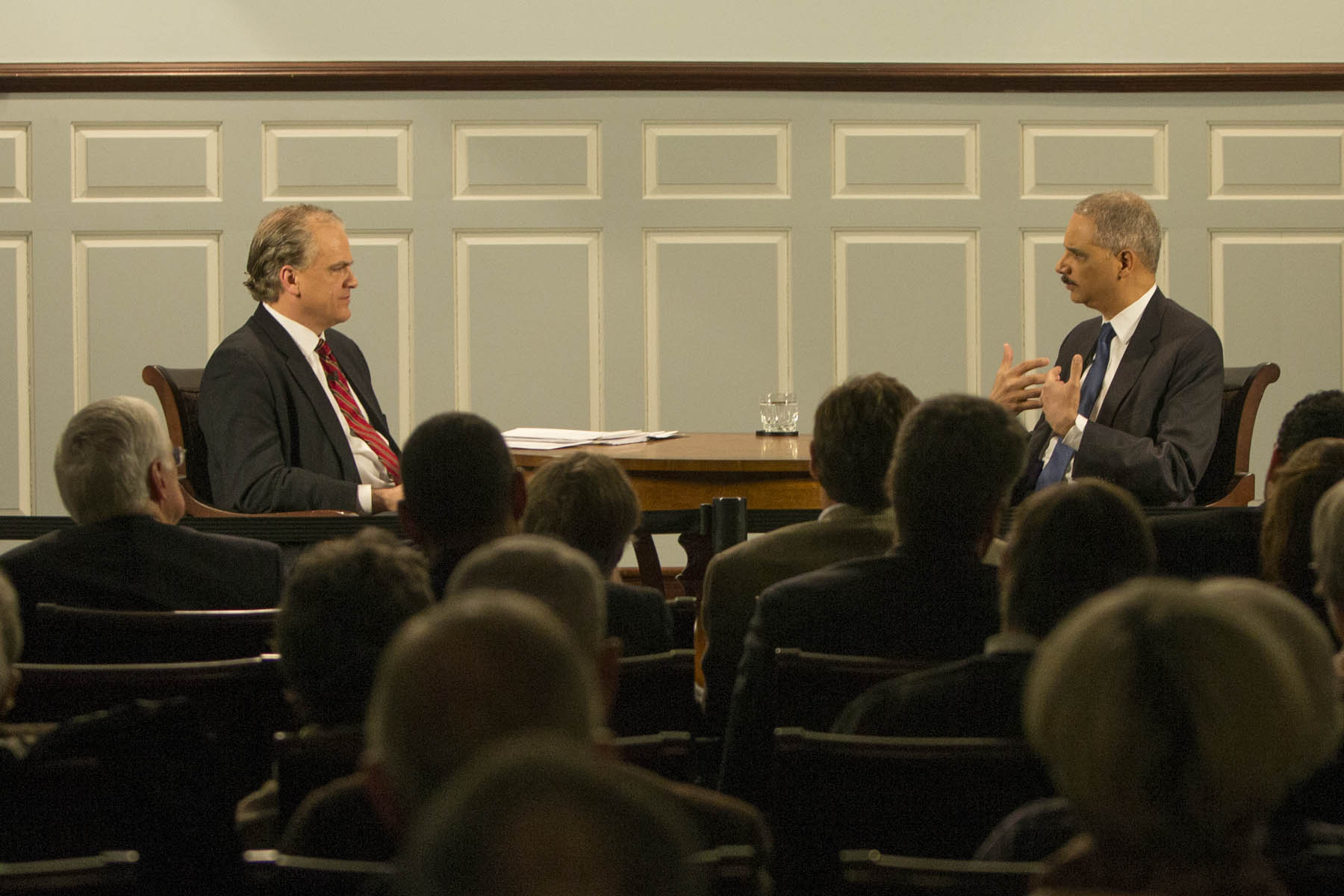 In remarks that several media outlets interpreted as a subtle softening of position – or an opening for Snowden’s lawyers – Holder said that “if Mr. Snowden wanted to come back to the United States and enter a plea, we would engage with his lawyers.” To elaborate, he added, “We would do the same with any defendant who wanted to enter a plea of guilty, so that is the context to what I said,” downplaying the significance of his statement.

In the wake of recent editorials in the New York Times and other newspapers calling for clemency for Snowden, Holder reiterated, “Clemency isn’t something that we are willing to consider.”

He added, “By his actions, [Snowden] has harmed the national security of U.S. in ways I know I can quantify and demonstrate, were I allowed to share with you things I see in my daily intelligence brief.”

The Snowden leaks have prompted national discussion of the NSA programs that capture billions of pieces of data about law-abiding American citizens, including bulk “metadata” on phone calls.

The resulting national discussion is a “consequential conversation” on privacy rights, national security and other “issues that go to the core of who we are as a nation,” Holder said.

“We have unbelievable, wonderful capabilities,” Holder said. “But the president has framed it well: Just because we can do something, doesn’t mean we should do something.”

This was one of many topics Holder addressed in an hour-long interview with journalist and Pulitzer Prize-winning author Douglas A. Blackmon, host of the Miller Center Forum series. The interview, held in front of a capacity audience, was filmed for “American Forum,” the Miller Center’s weekly public-affairs program that airs Sundays on public television across the country, including four stations in Virginia. The Holder interview will air Feb. 9, the Miller Center’s Kim Curtis said.

Holder also made news when he announced that lawful marijuana businesses should have access to the banking system, and the Department of Justice will soon offer rules meant to facilitate that outcome.

Banks have been leery of being connected to any business involving marijuana, for fear of unwanted scrutiny or possible prosecution for money laundering or “aiding and abetting” a criminal enterprise in any way. That has forced newly legalized marijuana dispensaries to conduct business almost entirely in cash, creating a host of risks and difficulties.

“You don’t want just huge amounts of cash in these places. They want to be able to use the banking system,” Holder said. “There’s a public safety component to this. Huge amounts of cash, substantial amounts of cash just kind of lying around with no place for it to be appropriately deposited, is something that would worry me, just from a law enforcement perspective.”

When asked by Blackmon if this was an evolution in the administration’s position on the legalization of marijuana, Holder said the move is “an attempt to deal with a reality that exists in these states” that have legalized marijuana for recreational or medical use. Furthermore, he noted that the Department of Justice would continue to enforce federal drug laws, prioritizing enforcement according to eight principles issued last year, including prevention of marijuana activity that involves violence, minors, interstate trafficking or gangs and cartels.

Mass incarceration and wrongful convictions were just a couple of the thorny issues for the criminal justice system that Holder’s wide-ranging interview touched on, along with gay marriage, racial profiling by police, voter ID laws and the trial of al Qaeda leader Khalid Sheik Mohammed, among other topics.

Former U.S. defense secretary Robert Gates’ contentious new memoir, “Duty: Memoirs of a Secretary at War,” includes some criticism of the current administration, and publishing such a memoir while Obama is still in office “was a mistake” Holder said.

Reflecting on his five years in office, Holder said that some goals could not be accomplished during Obama’s first term. “You can’t come in on day one and do the kinds of things we’re now doing in year five. … It’s a process. ... You have to build support for the kinds of things that we want to do,” he said.

Holder said he took his office because he “wanted to do consequential things… to effect positive change, to raise questions, to correct unfairness, to make our society more just.

“I understood this necessarily would run counter to some of the ideological norms that we have.”

Holder said he was undaunted by the criticism he has faced. “Ten, 15 years from now, people will look back on this Justice Department and say, more often than not, we got it right.”