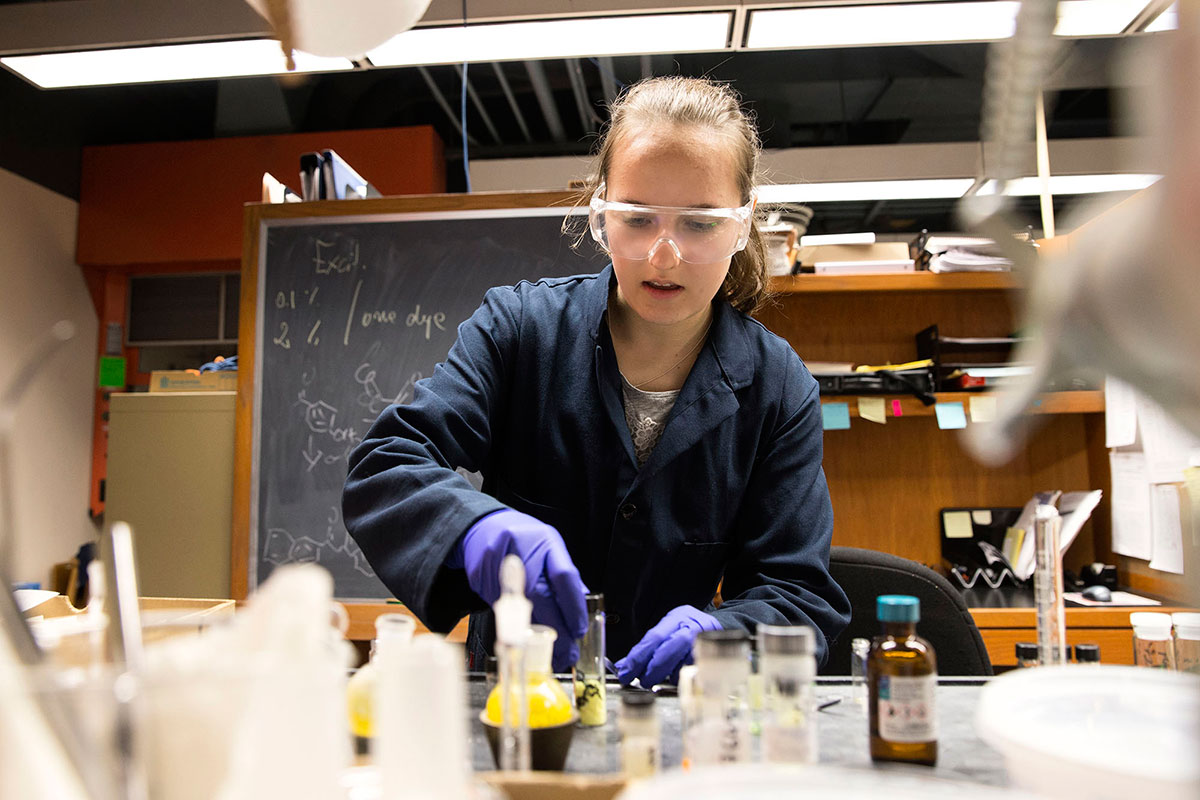 From examining how James Joyce’s work relates to civil unrest to quantitative eco-labeling schemes, and from researching Roman property law to analyzing the pathology of Alzheimer’s disease, 50 University of Virginia undergraduates will pursue 46 grant-funded research projects this summer.

Forty-five proposals involving 49 students received Harrison Undergraduate Research Awards and another student has had his research underwritten by the Stull family of Dallas. This marks the 17th year of the program, which helps further a key component of the UVA student experience: pursuing hands-on research.

The research awards support students who present detailed plans for projects that have been endorsed by a faculty mentor. In February, a Faculty Senate committee selected the winners, who receive up to $3,000. Faculty mentors who oversee the projects receive $1,000.

“The Harrison Undergraduate Research Awards provide an opportunity for undergraduate students to participate in a core purpose of the University by creating and advancing new knowledge,” said Brian Cullaty, director of undergraduate research opportunities at UVA’s Center for Undergraduate Excellence. “The program aspires for these student-faculty collaborations to make an original intellectual or creative contribution to the discipline.”

The center received more than 70 grant applications, which were reviewed by nearly 50 faculty members, including the members of the Faculty Senate’s Research, Teaching and Scholarship Committee.

“The winning applications were those that addressed an important societal problem, addressed a clear question and described a well-designed research approach,” said Silvia Blemker, Commonwealth Associate Professor of Biomedical Engineering and chair of the Faculty Senate’s Research, Teaching and Scholarship Committee. “It was a very competitive selection process; the committee was extremely impressed with the creativity, passion and depth illustrated by all the applications.”

The research awards open new avenues of learning for the undergraduates.

“The Harrison Award is a unique opportunity for students to work intimately at the edge of knowledge, defining their own research direction while being closely mentored by faculty members,” Blemker said. “Many Harrison awardees go on to present their findings at national conferences and publish their work in peer-reviewed journals.”

Cullaty added, “Undergraduate research has been identified as a high-impact educational practice, and a number of studies have cited its role in cognitive development, building skills and knowledge, and leading to a sense of accomplishment. The process moves students away from passive learning and furnishes them with the ability to demonstrate mastery of disciplinary concepts and then apply their knowledge to the process of research and discovery. This type of work prepares students effectively for their future endeavors, including graduate study and careers that require innovative leaders.”

More than half of UVA’s undergraduates engage in some form of research during their time at the University, including classroom and independent work. Students who conduct research make better candidates for fellowships, graduate and professional school admissions and career placement, Cullaty said.

“I’m grateful to the Harrison family for supporting this wonderful program, and providing a valuable opportunity for students to pursue their scholarly inquiries,” Cullaty said. “The Stull family is also an important supporter of making research an integral part of undergraduate education.”

Do You Know the History of Your Favorite Corner Spots? END_OF_DOCUMENT_TOKEN_TO_BE_REPLACED

Netflix to Add Ads. Why This Could Be a ‘Game-Changer’ for Your Viewing Experience END_OF_DOCUMENT_TOKEN_TO_BE_REPLACED

What’s Next for UVA’s Class of 2022? END_OF_DOCUMENT_TOKEN_TO_BE_REPLACED