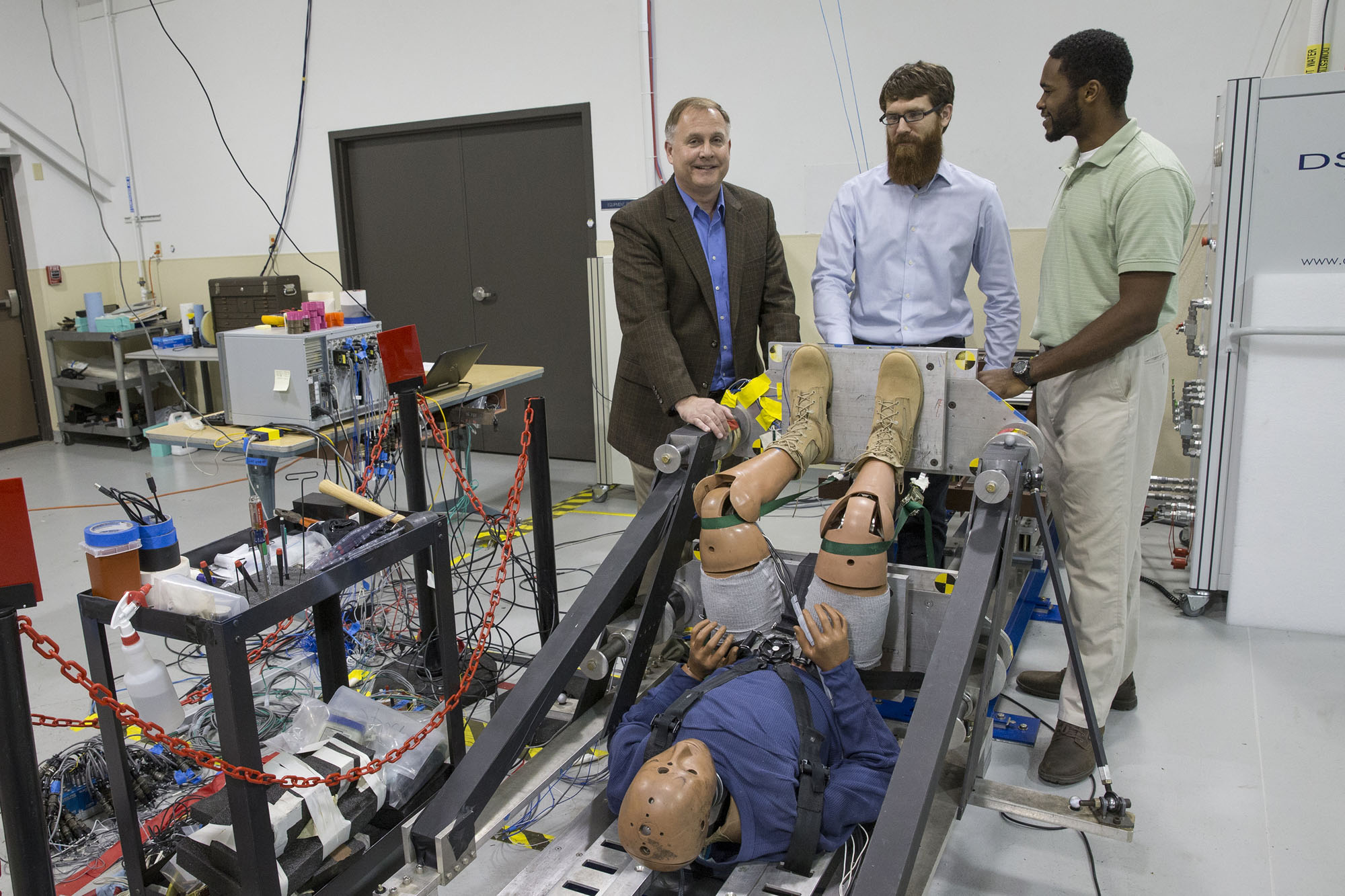 When the U.S. military entered Iraq and Afghanistan in the early 2000s, it used primarily light tactical vehicles such as Humvees and other armored personnel carriers to protect troops from ballistic threats while moving on the ground. However, insurgents soon subjected these vehicles and their occupants to a new type of threat: blasts from buried land mines and improvised explosive devices, or IEDs.

The military responded by hardening those vehicles with additional armor; the insurgents countered by making bigger, more powerful bombs. Eventually the military developed and deployed a new kind of war-fighting vehicle, Mine-Resistant Ambush Protected Vehicles, called MRAPs – each with at least 36,000 pounds of nearly impenetrable steel designed to protect the soldiers inside from blast shrapnel.

“The military then began seeing a new kind of injury to soldiers,” said mechanical engineer Robert Salzar, a principal scientist at the University of Virginia’s Center for Applied Biomechanics. “These were unexpected injuries, the result of high energy entering the vehicle structure, and then [being transferred] into the warfighters’ bodies.”

It is somewhat analogous to the way high-frequency sound waves can break apart kidney stones.

These high-rate injuries often proved severe, often involving fractured bones in the legs and pelvis. If the broken bones severed an artery, the soldier risked death from the resulting loss of blood. And the survivable injuries resulted in extended hospitalizations, medical amputations, long rehabilitations and lifelong disabilities.

The MRAPs were equipped with an armored, V-shaped hull, designed to deflect blast material away from the vehicle. The vehicles performed very well in that regard, but the energy contained in the blast wave remained a problem.

“The design was good for the survivability of the vehicles and keeping the flying debris away from the warfighters, but not always so good for the people inside,” Salzar said. “The military was looking to research for a better understanding of how these under-body blast injuries were happening and how the energy in the blast wave could be mitigated. They needed a better understanding of how the body behaves at high acceleration.”

Salzar and a team of researchers in the Center for Applied Biomechanics  – which primarily studies injuries that occur in car crashes – won contracts from the U.S. Army to design and conduct a series of studies to gain better understanding of under-body blast injuries, and to suggest injury-mitigating solutions that might be incorporated into the designs of the next generation of war-fighting vehicles.

Their task, essentially, was to simulate a blast environment in a laboratory setting, and, under measured conditions, gain intimate detail of what was happening.

“We developed a group of tests to learn exactly what happens to the human body when subjected to high-acceleration, short-duration loadings that come from below,” Salzar said. “We needed to know exactly when the body begins to break, and then come up with a design that would reduce the energy before we reach that point.”

The team developed a horizontal sled system that accelerated extremely rapidly from a standstill to the speed of a blast, simulating the effects of an explosion. The setup, where a crash test dummy is placed in a seated position, subjects the dummy to a motion much like a jet fighter pilot being ejected from an aircraft, except at a much higher rate of speed. Some studies had the dummies wearing protective vests and other equipment, as warfighters in combat wear, and in some studies without such equipment. The researchers sought to understand how the added weight of protective gear might affect the severity of potential injuries.

Salzar found injuries to the feet, tibia, pelvis and spine, similar to what was actually happening on the battlefield. He was able to measure the energy transferal as it moved up through the “floor” into the lower extremities and into the pelvis area.

“To design a vehicle that minimizes high-acceleration injuries, you must first understand how those injuries are occurring,” Salzar said. “We can’t destroy energy, but we can play with it; for example, we can transform the load into a pulse that is lower in magnitude and longer in duration, significantly altering the injury patterns.”

One way, he said, would be to limit the energy getting to the soldiers by shedding some energy from outside, “sacrificial layers” of material under the vehicle that would minimize energy transferal to the vehicle interior.

“With our tests we’ve been able to characterize what is happening in these explosions – the forces coming in and the injuries coming out,” Salzar said. “By understanding those injuries and how they happened, we can make recommendations that very well may reduce serious trauma and death for soldiers who fight the next war in the next generation of war-fighting vehicles.”